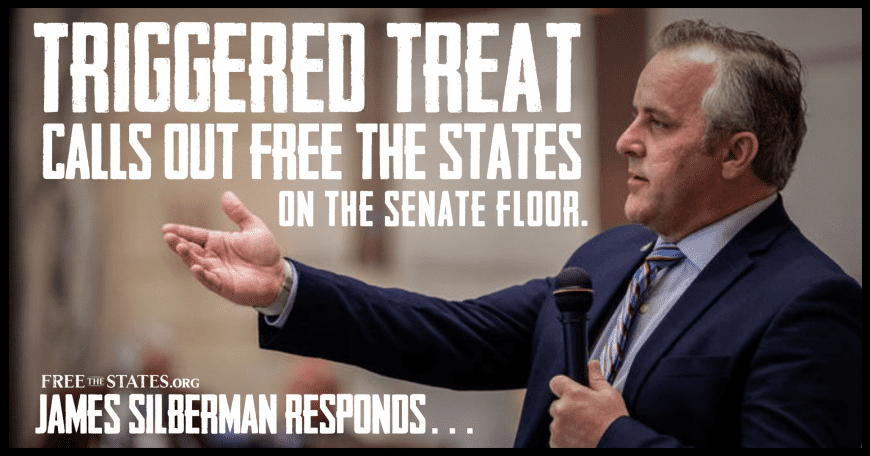 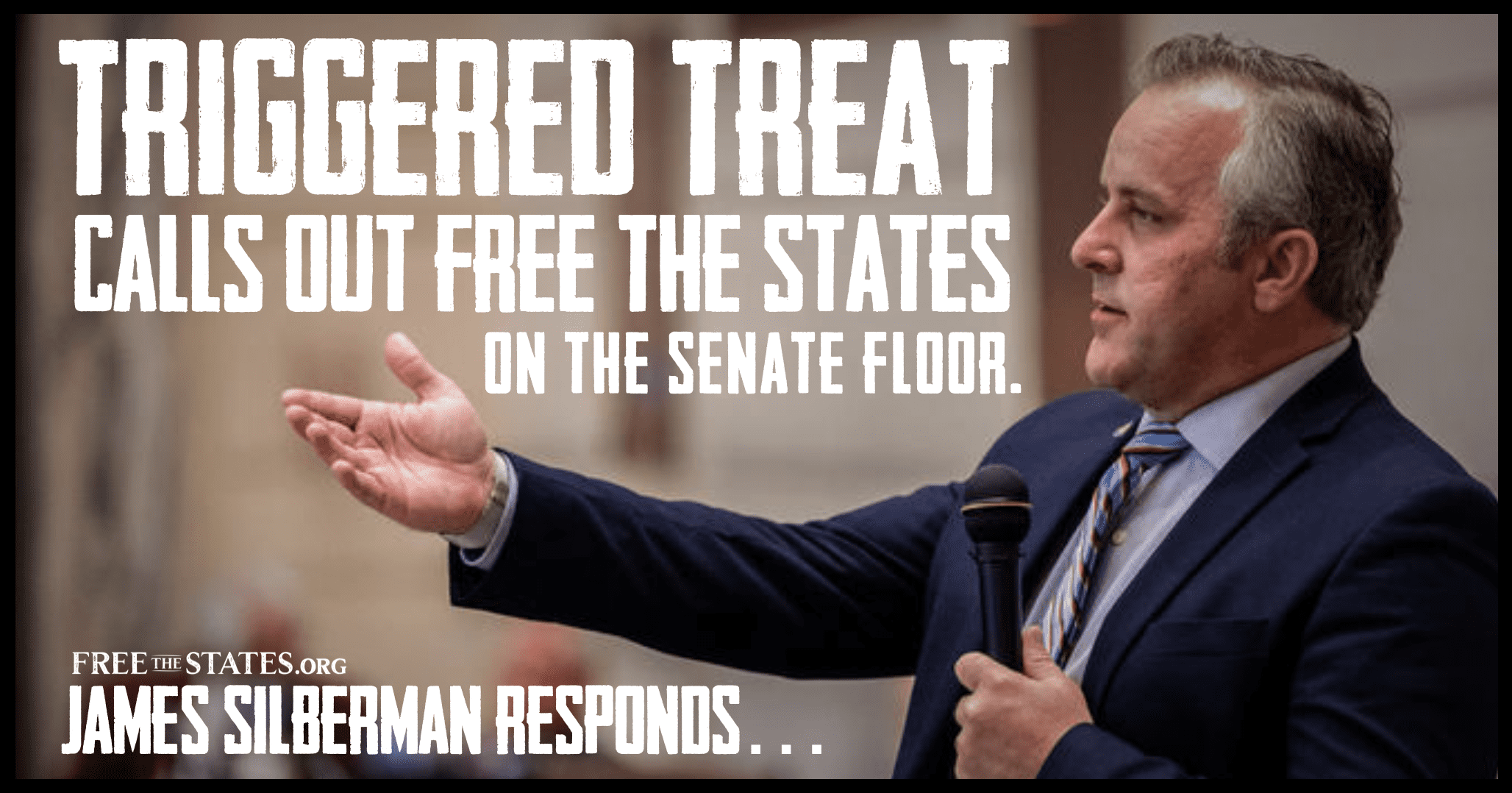 Last Tuesday, while defending himself against attacks over his opposition to State sovereignty, Senate Pro Tem Greg Treat quoted an excerpt from an article of mine on the Senate floor while making various criticisms of Free the States.

“This group [Free the States] that many of you know and some of you are friends with – they like to make threats in this building. They like to make threats against our U.S. Senators. They like to make threats all across in the name of Jesus Christ, which is so unchristlike. But they say, ‘Unsurprisingly, none other than Oklahoma’s leading federal bootlicker Greg Treat has published a statement opposing HB1236. His stated reasons are incredibly ignorant, even for him.’ Come on. This is not the language of God-fearing men and women who are to be Christ-like. And I took the stuff that I could read on the floor today.”

I will address Treat’s accusations one-by-one.

If by “threats,” he means threats to replace politicians who don’t obey Christ and uphold the Constitution, then sure. We make that kind of threat. If they won’t obey Christ or uphold the Constitution, then they should be replaced by people who will. But Treat seems to be insinuating that we deliver some sort of threat of violence or otherwise serious harm against the State and federal legislators. That would be slander. We have never done any such thing. On the other hand, pro-life Republican Senator Greg McCortney and former pro-life Republican Senator Larry Boggs have both threatened violence against abolitionists.

Treat needs to give details of what he’s talking about or his accusations should be disregarded. Claiming threats of violence against them and refusing to give details has been a common tactic of pro-life establishment legislators like Treat, McCortney, Jessica Garvin, and others. They keep child sacrifice legal, and then play victim when criticized for it. At a certain point, the accusations and the people making them lose credibility.

2) “Come on. This is not the language of God-fearing men and women who are to be Christ-like.”

I thought hard about this. I want to be Christ-like, and getting called unchristlike from the floor of the Oklahoma Senate is a good time to examine whether I am doing so. I asked two pastors if they thought I was out of line regarding how I wrote about Treat. Neither thought there was anything wrong with what I said.

One of them pointed me to Titus 1:10-16 which talks about sharply rebuking those who are “teaching for shameful gain what they ought not teach.” Treat is telling Oklahomans that they must remain subservient to federal opinions that child sacrifice should be legal. He is telling them that the Constitution gives the federal government unconditional authority over the states, and that upholding the right to life is unconstitutional. He is telling them this while demonizing as “unchristlike” those who are exhorting the State government to submit to Christ.

People who have known Treat since he first became a Senator have said that he wasn’t always like this. Like many, he changed when he got to the Capitol because the allure of climbing the ladder is difficult to resist, though you often must ditch your principles to do it. Given his decision not to support the immediate abolition of abortion, abolition bills and Free the States are possibly impediments to Treat climbing the ladder. So he slanders us for personal gain. Treat is well-deserving of a sharp rebuke.

3) “And I took the stuff that I could read on the floor today.”

In context, Treat seems to be referring to my article, insinuating that it contained obscene language that he couldn’t utter on the Senate floor. This is false. There were no obscenities, and the two sentences he mentioned were the harshest sentences in the article by far. Treat may have been talking about other emails he was receiving at the time or some other article, but most listeners will get the impression Treat is talking about my article, as that’s what he was talking about immediately prior. He should correct the record, either publicly or privately with his colleagues that there were no obscenities in my article.

I was harsh, but I was harsh against the man primarily responsible for keeping abortion legal in Oklahoma, who consistently spreads falsehoods about us and about the bill to abolish abortion. That is no sin. If I were to speak as God did about people who denied justice to the fatherless, I would have spoken much more harshly of Greg Treat.

What I regret is that Treat was able to pull out two harsh sentences, when I worked hard to write a 2,100-word refutation of his position. In the future, I won’t give him the two sentences that he wants to pick out of my writing so he can play victim on the Senate floor. I encourage everyone reading this to go read my article and to request that Senator Treat engage with the arguments made for nullification.

In our criticisms of politicians, a little bit (or even a lot) of heat is necessary because there are “mountains of ice about us to melt.” Until abortion is no longer approved of by God’s deacons in the Oklahoma State government, there is great need to be harsh.