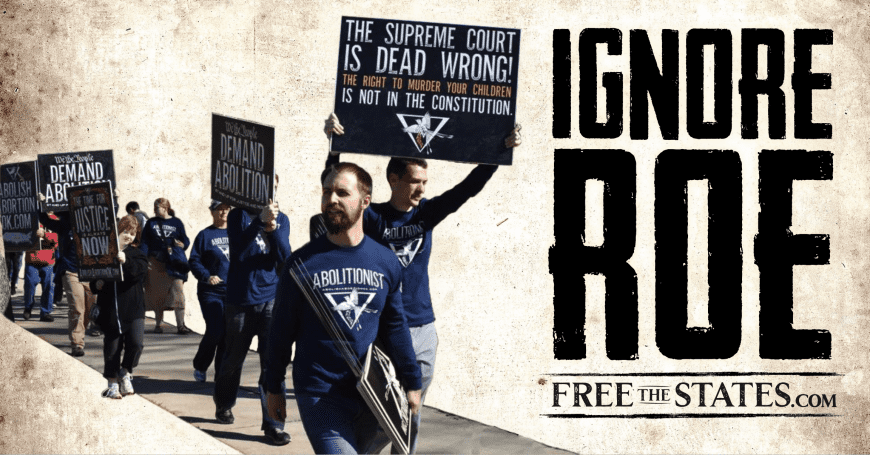 As abolitionists, we believe that no government possesses the rightful authority to legalize child sacrifice. The moment Supreme Court Justice Harry Blackmun delivered the majority decision in Roe v. Wade, the decision was legally null and void and should have been treated as such. By complying with the Supreme Court’s order to allow mass murder for 49 years, the states made themselves complicit in the murder of more than 65 million human beings.

With Roe now overturned, there isn’t presently the same need for state-level nullification of federal decrees, but there very well could be in the not-too-distant future. Federal democrats have made clear their desire to pass a law codifying Roe, stacking the Supreme Court with abortion supporters, or both. We must be ready to defy tyrants once again if the time comes. Further, county- or city-level nullification might need to be practiced in states that mandate legal abortion of all its municipalities. The principle of defying tyrants is always important.

This view was most precisely articulated by Texas Alliance for Life Executive Director Joe Pojman who told the Austin Chronicle in April, 2019 that “We could no sooner ignore SCOTUS than the force of gravity.” The problem with Pojman’s statement is much bigger than politics. In equating obedience to the Supreme Court with a law of nature, Pojman is telling us who his god is. His allegiance to the true and living God is reduced to a temporary alliance whenever God’s word happens to match the Supreme Court’s opinion.

Another example is Scott Klusendorf’s assertion at a Christian conference that we can’t abolish abortion because “the federal courts have already decided in Roe vs. Wade, the Casey decision, and others, that no unborn children have the right to life. They’ve already dictated that from on high.” Klusendorf’s claim isn’t as blatantly idolatrous as Pojman’s but is along the same lines. 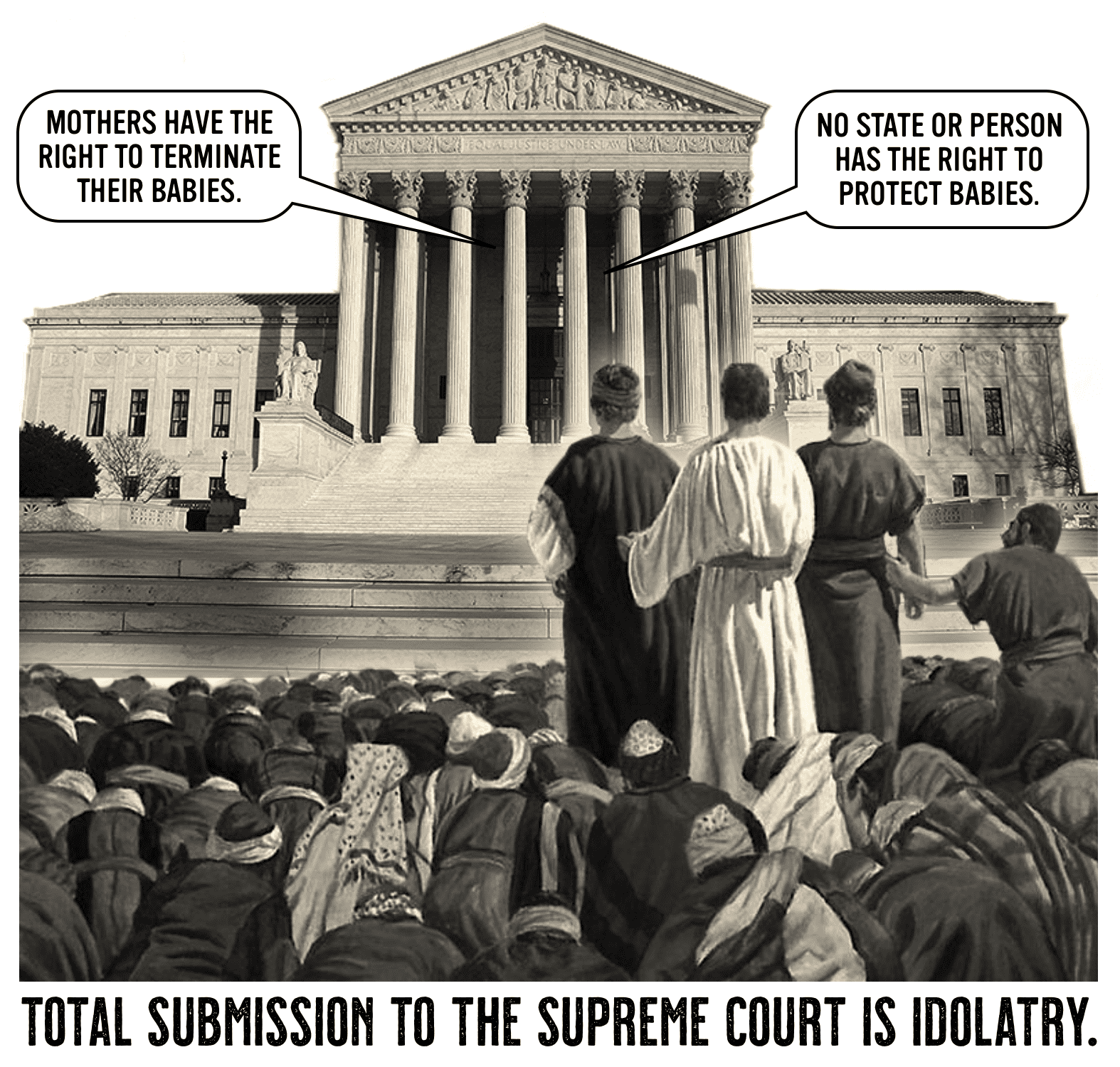 This idolatry is rampant among pro-life leadership. It’s why not one prominent pro-life organization ever supported the bills to abolish abortion in places like Oklahoma, Idaho, and Texas. They thought returning every few years to grovel for the Supreme Court’s permission to do what’s right was the appropriate way to fight the arbitrary federal legalization of murder. All the while, God’s word, not to mention the US Constitution, not only provide us the right to ignore evil diktats like Roe but command us to.

The Bible tells us to “rescue those being led to slaughter” (Prv 24:10), “bring justice to the fatherless” (Is 1:15), and love our neighbors as ourselves (Matt 22:39). You can do these things or you can submit to decrees that murdering certain humans should be legal, but you cannot do both.

The 1973 Supreme Court knew just as well as today’s abortion supporters of the scientific fact that life begins at conception. Some admit the truth while others, like Roe author Justice Harry Blackmun, feign ignorance; but they all know of the preborn’s humanity. Accordingly, the 14th amendment’s equal protection clause provides the little human in the womb the same legal protections against murder as anyone else. State and federal governments have simply refused to enforce those protections because the Supreme Court opined that they shouldn’t. Article VI of the Constitution specifies that only the Constitution and the laws made pursuant to it are legitimate laws. Roe is neither a law nor in any way pursuant to the Constitution. As former dean of Stanford Law John Hart Ely put it, “[Roe v Wade] is not constitutional law and gives almost no sense of an obligation to try to be.” What Ely is saying is that in Roe, Blackmun hardly tried to make his decision appear legitimate. The decision amounts to nothing more than simple tyranny; a transparent power grab by a branch of government determined to become the engine of societal upheaval.

Thomas Jefferson directly addressed the issue of whether the Supreme Court’s opinion is ultimate on Constitutional matters in an 1820 letter to Charles Jarvis:

“You seem to consider the judges as the ultimate arbiters of all constitutional questions; a very dangerous doctrine indeed, and one which would place us under the despotism of an oligarchy. Our judges are as honest as other men, and not more so. They have, with others, the same passions for party, for power, and the privilege of their corps…. Their power [is] the more dangerous as they are in office for life, and not responsible, as the other functionaries are, to the elective control. The Constitution has erected no such single tribunal, knowing that to whatever hands confided, with the corruptions of time and party, its members would become despots. It has more wisely made all the departments co-equal and co-sovereign within themselves.” (Emphasis ours.)

Jefferson also endorsed the constitutionality of nullification explicitly in the Kentucky Resolution, in which Jefferson wrote that “Every state has a natural right to nullify,” and that “nullification… is the rightful remedy” to Constitutional infractions committed by the Federal Government. 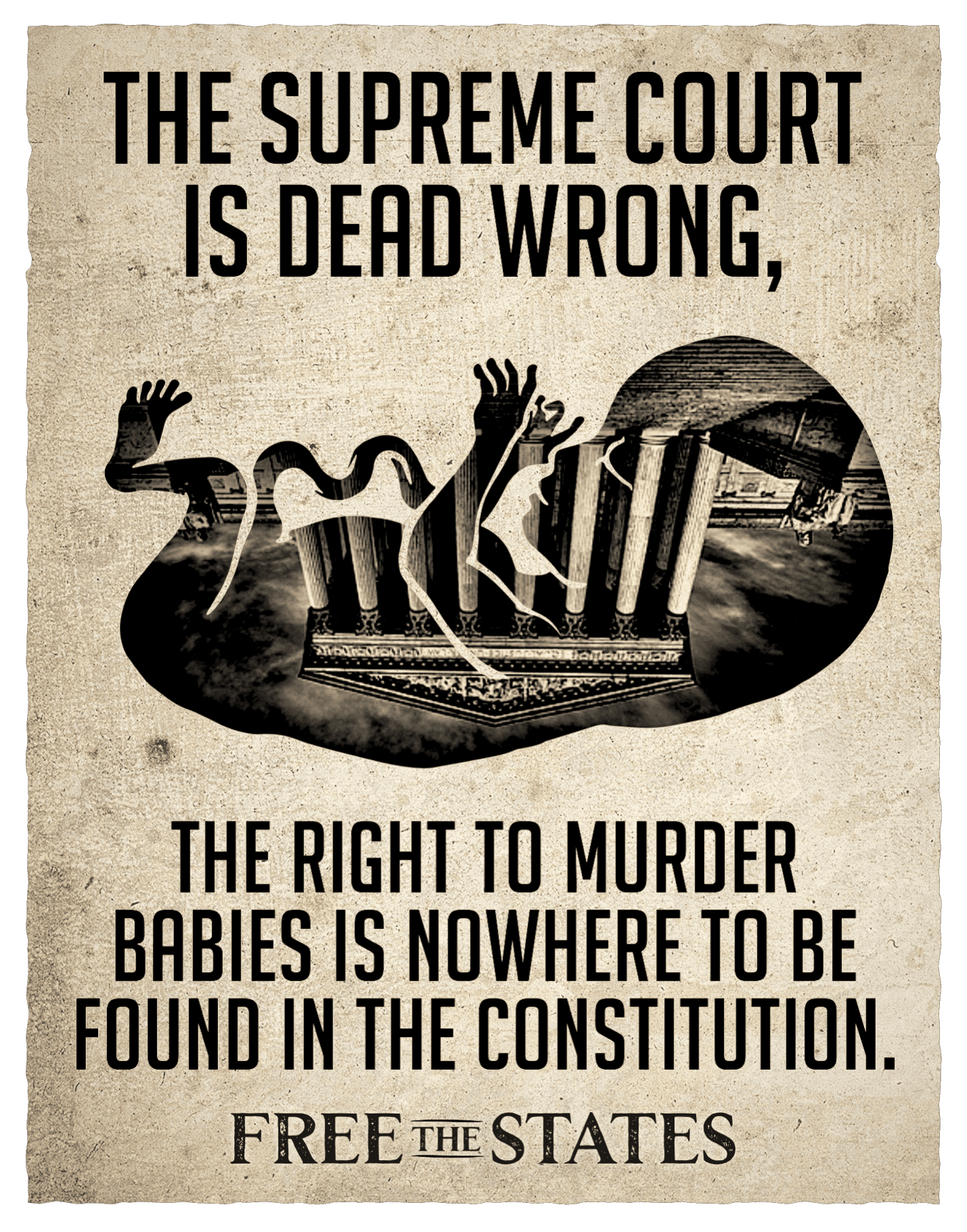 No reasonable honest, clear-thinking person believes the Constitution contains the “right” to an abortion. Honest leftists will admit this. In addition to Ely, leftist and Harvard Law professor Laurence Tribe wrote of Roe v Wade, “Behind its own verbal smokescreen, the substantive judgement on which it rests is nowhere to be found.” Edward Lazarus, a former clerk of Roe author Harry Blackmun who “loved Blackmun like a grandfather,” said “as a matter of constitutional interpretation, even most liberal jurisprudes — if you administer truth serum — will tell you [Roe] is basically indefensible.” The fact that the “right” to abortion is entirely an invention of the 1973 Supreme Court is not disputed by serious individuals.

It clearly doesn’t, but if the Constitution did protect the “right” to murder children in the womb, it too should be disregarded, for there’s a higher law which forbids the intentional killing of innocent human beings. Slavery Abolitionist William Lloyd Garrison was right to burn a copy of the US Constitution during a July 4th, 1854 speech to the Massachusetts Anti-Slavery Society because of the pre- 13th and 14th amendment compromises which allowed for slavery.

A legal document which allows for the complete dehumanization and brutalization of image bearers of God is, as Garrison called it, “a covenant with death and agreement with hell.” In our case, there is nothing in the Constitution which allows for abortion, a fact which honest abortion supporters will admit. Again, if there were, it would be a covenant with death and an agreement with hell, but it does not. For this reason, the Constitution should be included in the case against abortion while not necessarily being the foundation of it. 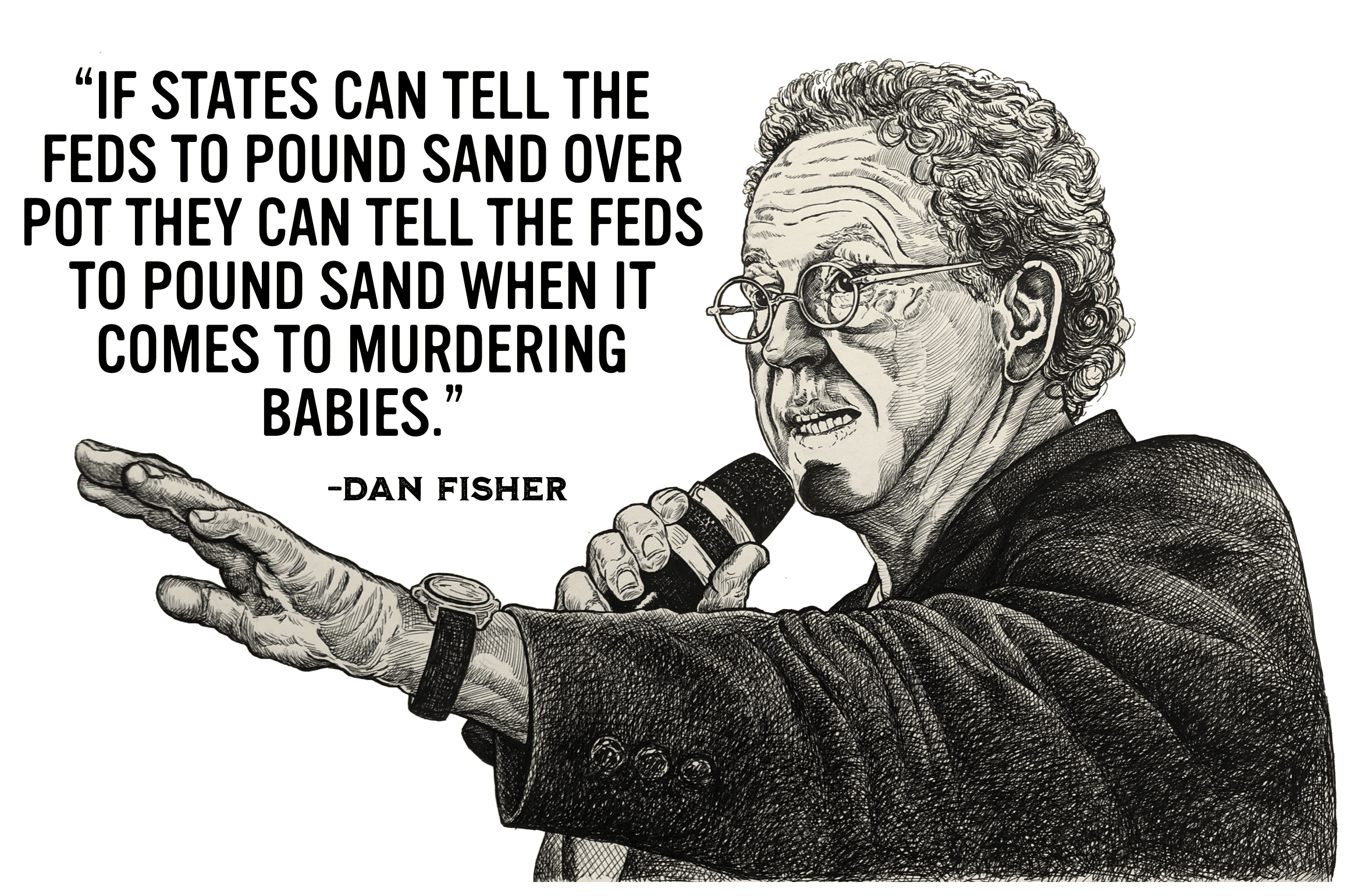 Other pro-lifers have separate reasons for unconditionally submitting to the Supreme Court. For instance, some are dissuaded from abolishing abortion by the prospect of losing federal funding. One of the biggest names in the Pro-Life Movement, who has since (thankfully) changed her position, formerly valued federal programs more than she did abolishing abortion. Her former position remains representative of a number of pro-life leaders: “Do you know what happens if a state decides to ‘defy’ the federal government [to abolish abortion]? No money to education. No more Medicaid for children or medically fragile children. Many hospitals would close. No military or disaster relief. Many, many people would be out of work. How is that a pro-life response?”

With Roe being morally execrable and legally null, state governors, legislators, and judges are morally and legally obligated to interpose – to put themselves between the tyrant and the victims who are being deprived of their God-given right to life.

State governments in Wisconsin, Michigan, Vermont, New York, and Massachusetts interposed on behalf of the victims of slavery by nullifying the federal Fugitive Slave Act of 1850 and the federal courts which demanded its enforcement. We are asking state governments to do the same today. 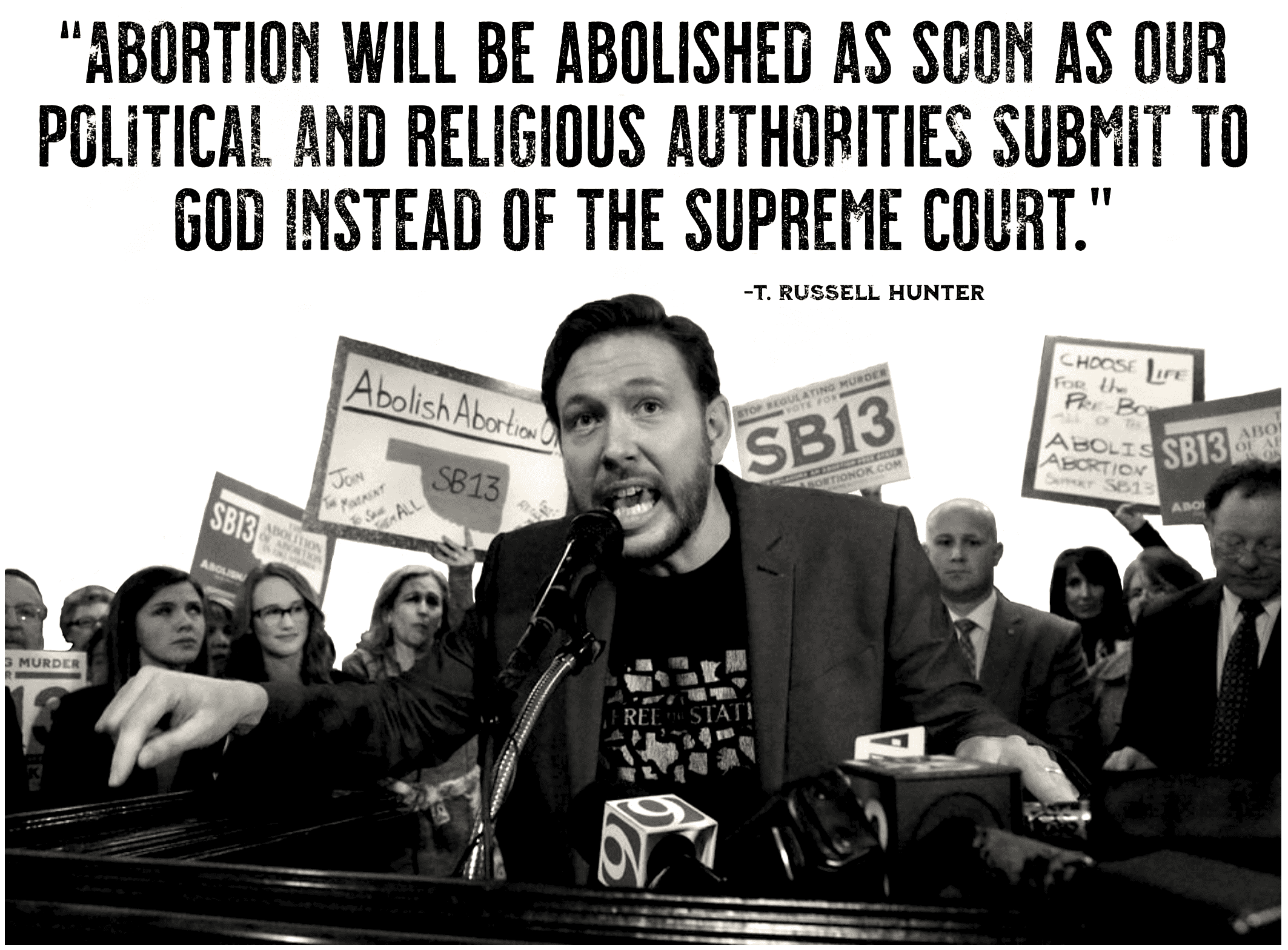 For the leaders and many rank-and-file of the pro-life movement, the law of the King of Kings as well as the nation’s founding document, which agree that murder must be outlawed, are to be made null by the arbitrary whims of a few black-robed oligarchs whose power is unassailable and ultimate.

We need to repent of this idolatry. The only appropriate response to an order to allow mass murder is non-compliance and resistance – in this case, ignoring Roe and abolishing abortion. This requires less concern over what men will do if we outlaw murder and more concern about what God will do if we don’t.