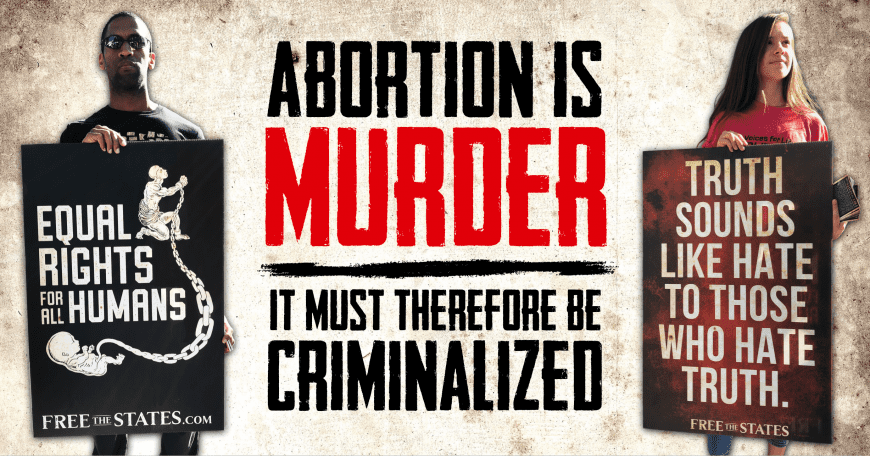 If abortion is murder, and we all know it is, it ought to be criminalized as such. Abolitionists believe that abortion must be totally abolished through a law which makes preborn children equal under law. Equal protection for preborn children would mean that preborn children would be afforded all the same legal protections that all of us enjoy. It would mean that nobody — not father, mother, doctor, or anyone else — is permitted to participate in the murder of a child in the womb. It would mean the available penalties for murdering any other person would be available for anyone found guilty of knowingly murdering a preborn human being.

Equal protection would not mean that every mother or father who murders their child would receive murder charges. There are all sorts mitigating and exculpating factors that might lessen or eliminate the penalty for an aborting parent in a given situation. Some women are victims who are coerced into having abortions, and will not face any charges. Some will deserve second- or third-degree murder charges based on the circumstances. Some will receive immunity by testifying against the abortionist or pill trafficker (the big fish, so to speak). Each person charged with murder by abortion would receive all the same due process and opportunities for appeal that all defendants receive. This is the abolitionist position.

Put simply, equal protection is the American legal term for the Biblical principle of impartiality. Leviticus 19:15 commands to Israel’s judges, “You shall do no injustice in court. You shall not be partial to the poor or defer to the great, but in righteousness shall you judge your neighbor.” Equal protection is the fulfillment of this principle.

The 14th amendment of the U.S. Constitution reads (emphasis ours), “No state shall…deny to any person within its jurisdiction the equal protection of the laws.” This means that every state is prohibited from separating out classes of people who get varying levels of legal protection. Everyone must be treated as legal equals. Properly understood and applied, the 14th amendment prohibits any state from allowing crimes like homicide to be committed against preborn human beings, and further prohibits states from treating preborn children differently under law.

On the other hand, political strategists in the Pro-Life Establishment are committed to a strategy of giving automatic immunity in all cases to the mother who murders her child or has them murdered. No mother can ever face any legal penalty for abortion no matter how many of her preborn children she intentionally murders. This strategy is pursued in an attempt to garner greater public support for legislation.

Not only does the Pro-Life Establishment pursue this strategy in their legislation, they oppose abolition bills which allow the possibility of legal penalties for mothers who murder their children. In April 2022, the Abolition of Abortion in Louisiana Act passed through the Louisiana House Criminal Justice Committee by a 7-2 vote. Every Republican supported the measure. But on the day of the floor vote, 76 pro-life organizations led by National Right to Life, published a letter that was sent to every state legislator in the country, asking pro-life legislators to oppose any bill that allows prosecution for mothers who murder their children:

All but two Louisiana Republican Representatives who had previously supported the abolition act turned and opposed it. The bill was defeated and mothers continue to murder their children in Louisiana to this day. 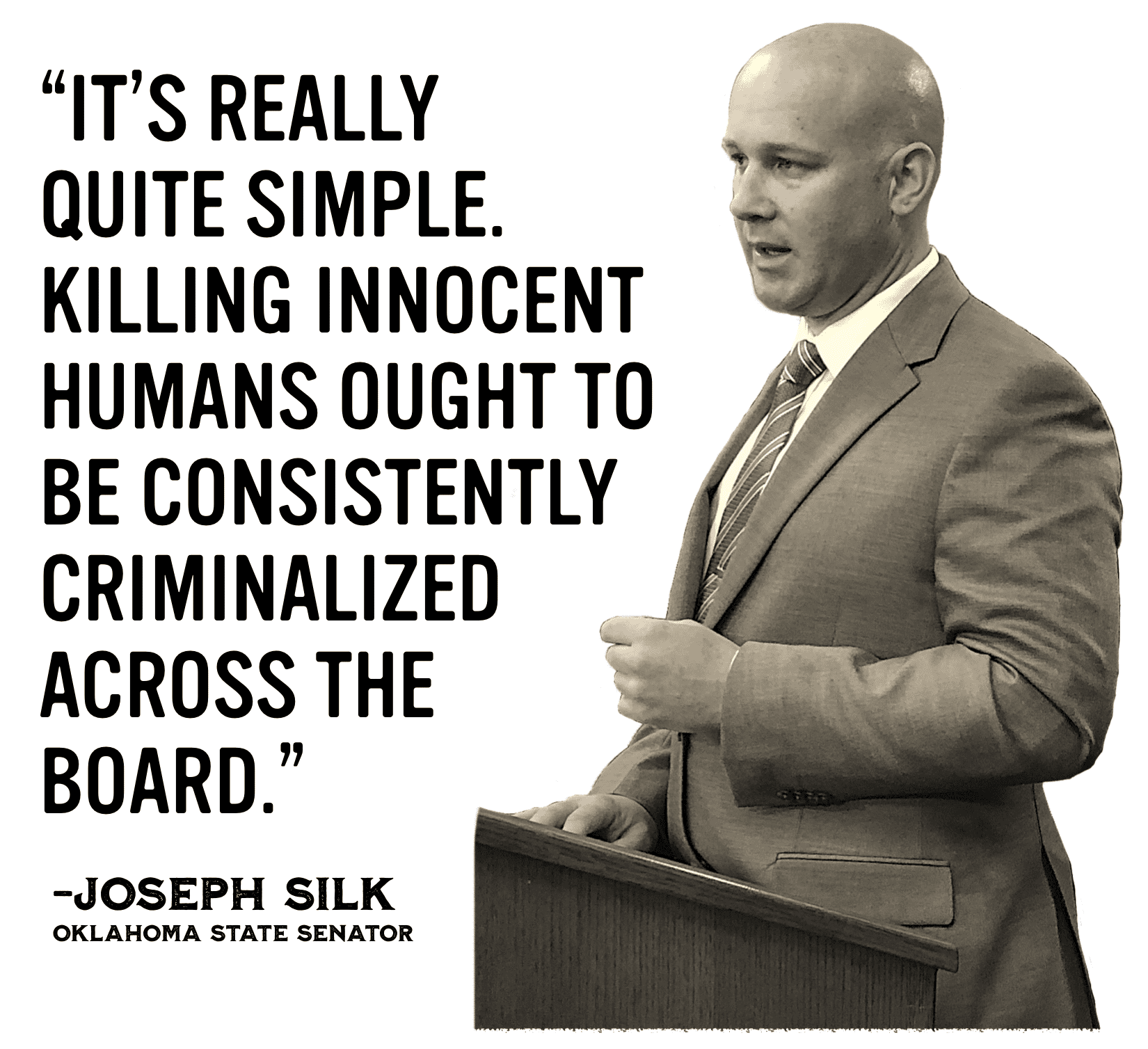 Rather than making political calculations, abolitionists simply proclaim the truth that abortion is murder and must be abolished without shying away from any of the perceived consequences of that position. We demand justice through equal protection of the law for all image bearers of God. Equal justice and the abolition of abortion are thwarted by the pro-life movement’s refusal to fully criminalize abortion.

Their insistence on providing aborting mothers immunity in all cases is a clear violations of God’s prohibition of partiality and of his mandates to do justice. This is enough to reject their position, but for three further reasons, the parental exemption to abortion prosecution is fundamentally unjust and unloving toward unborn children, abortion-minded parents, and the culture as a whole.

Providing automatic immunity in all cases to mothers who have their children murdered means that self-managed abortions are legal. In fact, Cari Sietstra, a board member of the National Abortion Federation, published an article in The New York Times in 2019 calling pro-life and pro-choice people to work together toward a self-managed abortion industry that is allowed under pro-life legislation:

As Sietstra pointed out, pro-life laws literally create a right to abortion as long as the murder is accomplished without the help of a third party. What she advocates is in accordance with the legal strategy of the pro-life movement. The abortion industry is quickly moving toward DIY abortions meaning that the real accomplishment of pro-life regulations is expediting the evolution of the abortion industry toward earlier, self-managed abortions.

That evolution is happening fast. Mail-order abortion pill services and online abortion counseling services have been operating in countries where abortion is illegal for years. Fearing abortion becoming illegal in the United States, some are opening up shop here. Women on Web and Aid Access are shipping abortion pills in the United States. An organization called Self-managed Abortion; Safe and Supported (SASS) is training American women how to kill their prerborn children on their own.

Hotlines which help mothers skirt the law while self-inducing abortions, like the Self Induced Abortion Legal Team, are already operating here as well. These hotlines, working in tandem with abortion-pill-to-your-door companies, make self-managed abortion easily obtainable to everybody.

And it’s not as if we could simply cut off the supply of abortifacient drugs. Many of these drugs, such as misoprostol, have other uses and are not difficult to obtain. As Sietstra explains, “We should start seeing [misoprostol] as a prophylactic drug that deserves a place in our medicine cabinets. We should ask our clinicians for prescriptions before we need it.”

To oppose equal protection for preborn children is to support the legalization of self-managed abortion.

The penalties for people who steal don’t completely get rid of theft, but they do deter many would-be thieves. One of the few things on which pro-choice and pro-life people agree is that abortion is often a difficult decision. While some commit murder without ever even considering keeping their baby, it’s a close call for most. That call would no longer be a close one if homicide charges were added to one side of the scale.

At the 2020 Abolition Now Conference, abolitionist Cheryl Cali told the audience that her child would be with her today had equal justice been provided to preborn children at the time of her abortion: “If I were not exempt from being prosecuted for murdering my own child, I would not have gone into a Planned Parenthood at 15 years old and killed my baby.”

Abolitionist Jill Robbins echoed Cheryl: “If only abortion had not been an option, how different things might have played out for my life and for sure for the life of my child who didn’t get a chance to live his life. Righteous laws restrain evil behavior.”

Removing immunity for mothers who choose abortion doesn’t mean we’ll charge a million mothers and fathers who made excruciating decisions with murder. It means the vast majority will never murder their children in the first place. Penalties are a deterrent.

Of course, there are often difficult circumstances which lead to abortion. We should have compassion for people in those circumstances, which is exactly why we must not leave the murderous, soul-destroying option of self-induced abortion on the table for them. We must make sure the law teaches them the right things and deters murder. Pro-life laws which don’t criminalize abortion provide no reason not to have an abortion.

Thinking that it strengthens their case for automatic immunity for mothers and fathers who murder their children, pro-life leaders often highlight the fact that pre-Roe abortion bans provided immunity. This is true, but what they don’t know, or simply don’t want to acknowledge, is that these immunities are a huge part of the court’s decision to force legal abortion on the states in the first place.

In Roe, the State of Texas argued that the 14th Amendment’s equal protection clause provided unborn human beings protection against murder, just like the law protected everyone else against murder. However, Texas’ pro-life laws gave full immunity to the parents who had their children murdered. Accordingly, Justice Harry Blackmun explained in footnote 54 of the Roe v. Wade decision that these immunities legally undercut the anti-abortion case:

There are other inconsistencies between Fourteenth Amendment status and the typical abortion statute. It has already been pointed out that in Texas the woman is not a principal or an accomplice with respect to an abortion upon her. If the fetus is a person, why is the woman not a principal or an accomplice? Further, the penalty for criminal abortion specified by Art. 1195 is significantly less than the maximum penalty for murder prescribed by Art. 1257 of the Texas Penal Code. If the fetus is a person, may the penalties be different?

These historic pro-life laws are not a good standard to try to return to, but an egregious mistake that we must learn from. We must demand the full criminalization of abortion as murder.

Even with Roe now overturned, the principle still applies. Giving mothers immunity from prosecution undercuts abolition by allowing self-managed abortion, and it undercuts the whole anti-abortion argument with its logical inconsistency.