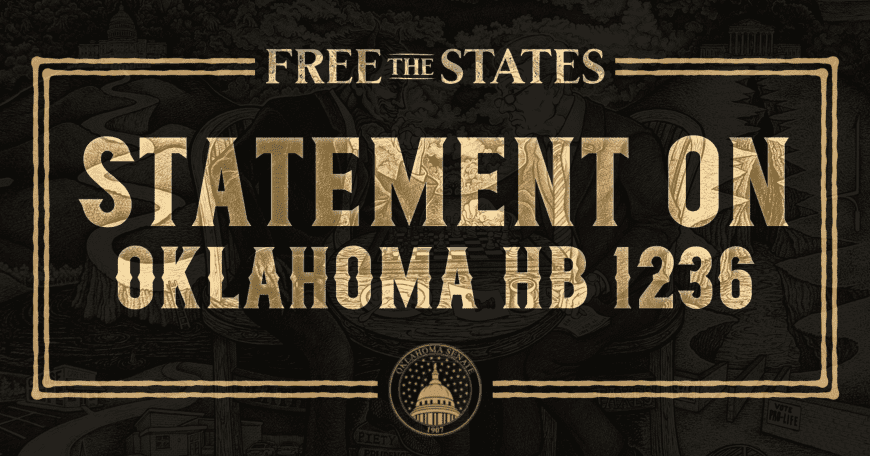 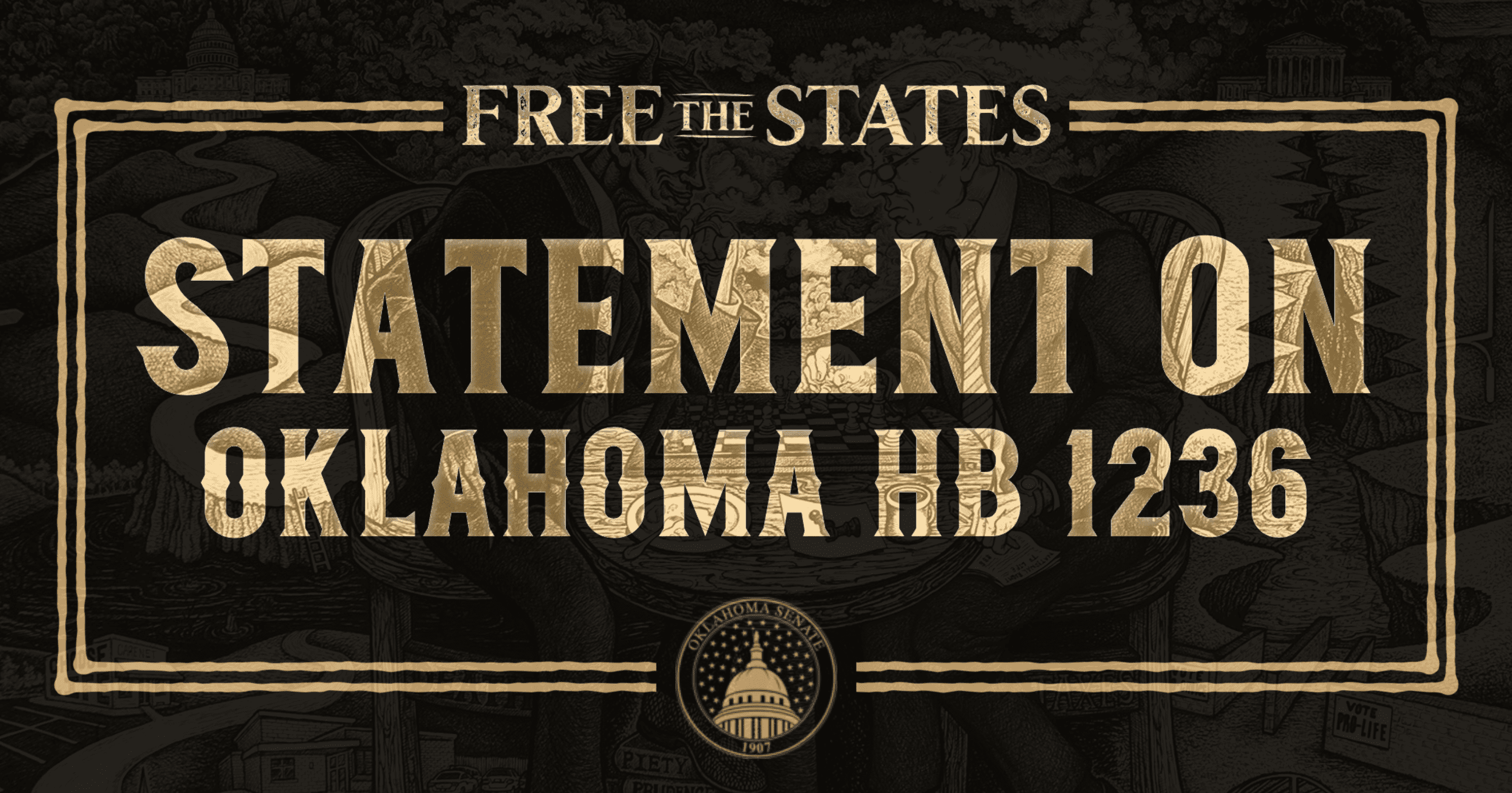 Oklahoma House Bill 1236 by Speaker Charles McCall is an act recognizing that the State legislature possesses the right to review certain actions of the federal government for unconstitutionality, and to refuse to cooperate with them if the State finds them illegal. On Tuesday, April 19th, a rally is being held at the capitol to support the bill. From 3-5 p.m., attendees will meet with legislators, from 5-6 p.m., pizza will be provided on the fourth floor of the capitol, and the rally program will begin at 6 p.m.

Free the States supports HB1236, but with a qualification.

Before addressing any specifics of the bill, it is crucial to note that the passage of this bill is not actually necessary in order to defy evil or illegal federal usurpations. The federal government is a creation of the States, and the US Constitution is a pact made between the states. It is therefore absurd to claim that the federal government possesses the authority to determine the extent of its own power over the States.

Further, more foundational than any Constitutional argument is the fact that nullification – as Thomas Jefferson put it – is a natural right. Put simply, nullification is refusing to do evil. The federal government is not superior to the States, but even if it were, inferior authorities have a right and duty to resist evil orders from a superior. To quote from another article on our blog:

“When Nazi war criminals went before an international court in Nuremberg, the primary legal defenses were versions of “befehl ist befehl” – ‘an order is an order’ or ‘I was just following orders.’ This plea is now known as the ‘Nuremberg Defense.’

“The defense was not well-received by the court. Many were executed and rightly so because there is a law higher than man’s law. The Declaration of Independence refers to it as the law ‘of nature and nature’s God.’ Any government order to murder the innocent is null by its nature because it is in violation of the highest law. For this reason, ‘I’m just following orders’ or ‘I’m just following the law’ is no legitimate defense for those who play a part in atrocities.”

When ordered to commit or allow injustice by a higher magistrate, the lower magistrate must refuse injustice and uphold justice. Any other position enables tyranny and even genocide. Oklahoma should defy evil or unconstitutional federal actions of the federal government with or without the passage of HB1236.

With that said, there is a benefit to making the right of the State to nullify explicit. The tenth amendment of the Constitution implies the right to nullify by limiting the federal government’s authority to those powers explicitly designated in the US Constitution. Making the right to defy tyranny explicit publicly acknowledges that right. For this reason, Free the States supports HB1236, though not without the following qualifications.

As passed by the House, HB1236 only recognizes the right of Oklahoma to review a federal executive order, agency rule, or congressional act. The worst unconstitutional abuses have come from the federal judiciary, yet HB1236 does not recognize any right to defy the judiciary. There are two likely reasons for this ommission.

First, the Oklahoma legislature likely views the federal judiciary – SCOTUS in particular – as being conservative, and thus does not want to defy them. The problem is that SCOTUS is not conservative by any meaningful measure. If history teaches us anything, it’s that most Republican appointments to the supreme court do not rule conservatively (unless by “conservative” you mean, in favor of big government, anti-christian values, and preserving court precedent at the cost of tens of millions of lives). As recently as last year, our “conservative supreme court” ruled in favor of the most deranged leftist delusions in Bostock v. Clayton County by ruling that homosexuality and transgenderism are protected classes. John Roberts is a reliable progressive vote, Neil Gorsuch is all over the place, and Amy Coney Barrett and Brett Kavanaugh are extremely timid after their brutal confirmation processes. Even if you were to assume, against all evidence, that the supposedly conservative supreme court will not inflict further damage, it is very safe to assume that they have no intentions of undoing the damage against the republic inflicted by their tyrannical predecessors. The past 60 or so years of federal judicial precedent remains the primary source of federal tyranny. To not deal with that is to not deal with the heart of the problem. We cannot and should not rely on the supreme court to give back power that they themselves usurped. We must do it ourselves.

Second, recognizing the right to defy unconstitutional actions of the federal judiciary would mean they are recognizing the right to defy Roe v. Wade. By refusing to support the Abolition of Abortion in Oklahoma Act, the pro-life Republican dominated Oklahoma legislature has made abundantly clear over the past five years that they desire to keep the State submissive to the genocidal opinions offered in Roe v. Wade.

When pressed about their refusal to abolish abortion, the most common objection of Oklahoma legislators is the Nuremberg Defense. “Beifel from the supreme court est beifel” they claim. When the Oklahoma State government approves of the mass murder of preborn children, they’re simply following the orders of the supreme court and can do no other.

These reasons not to include the federal judiciary among those entities which Oklahoma reserves the right to defy do not hold up under scrutiny. HB1236 should be amended to explicitly include the right of Oklahoma to review and reject federal court rulings.

Section 1 of HB1236 should be amended to read (emboldened words are additions):

We encourage Oklahomans to attend tomorrow’s rally at the Capitol and, while meeting with Senators, to request HB1236 be amended to include the defiance of unconstitutional federal court rulings.

Unsurprisingly, none other than Oklahoma’s leading federal bootlicker Greg Treat has published a statement opposing HB1236. His stated reasons are incredibly ignorant, even for him. We will have a write-up responding to his ludicrous historical and constitutional incoherencies up on our blog tomorrow, so make sure to check back then!