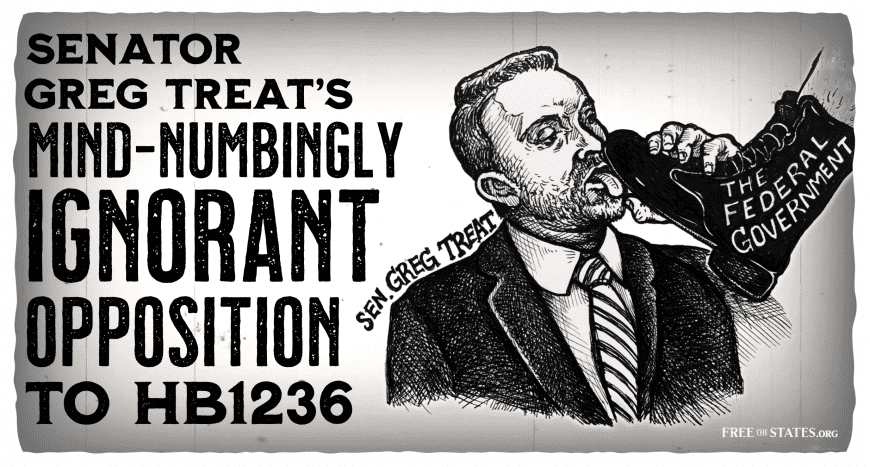 Also yesterday, Senate Pro-Tem and anti-abolitionist leader Greg Treat published his statement on HB1236, opposing it in its current form and offering his own amendment which completely guts the bill of all meaningful language. On his social media pages, Treat said,

“The federal government is relentless in its interference with state authority, and Oklahoma will continue to push back at every opportunity. As originally written, HB 1236 gives people false hope because it is an unconstitutional nullification bill that clearly violates separation of powers. That is why I had concerns about it. Nullification is a failed legal theory that Southern states used to justify slavery during the Civil War. Nullification undermines the tenets of our republic. I will offer a substitute to HB 1236 today that removes the troublesome and unconstitutional language and adds real teeth to the worthwhile attempt to push back against federal overreach.”

There are eight marijuana shops within walking distance of the Free the States office – including one we share a wall with – which testify to the fact that nullification is not a failed legal theory. Both the federal Controlled Substances Act and the Gonzales v. Raich supreme court decision were nullified in Oklahoma when we legalized the drug. The Senate, Treat included, passed SB631 which nullifies unconstitutional federal gun regulations earlier this session. Treat himself authored SB1379 in 2016 nullifying federal EPA regulations. Nullification is not a failed legal theory. It is an oft-practiced principle, even by Treat himself.

As we have previously demonstrated beyond any shadow of a doubt, nullification was a practice of the abolitionists to the dismay of the slave states. From our March 2019 article, Are Nullifiers the Villains of American History?:

On the evening of March 10th, 1854, two wagons carrying seven men approached a cabin in Racine, WI. Inhabiting the cabin was escaped slave Joshua Glover and the men were federal agents. By the authority of the Fugitive Slave Act of 1850 and a warrant signed by a federal judge, the men burst into Glover’s home, beat him, arrested him, and threw him on a wagon headed for the Milwaukee County Jail.

Upon hearing of the arrest, Racine County Sheriff Timothy Morris tracked down one of the wagons, intending to save Glover. Unfortunately, it was the decoy wagon. The one containing Glover successfully made the six-hour journey from Racine to Milwaukee. Still, Sheriff Morris arrested the federal agents on suspicion of kidnapping, assault, and battery.

Around 9 a.m. the next morning, Milwaukee newspaper editor and abolitionist Sherman Booth received a telegram from Racine explaining the situation. Booth saddled his horse and rode through the city exhorting everyone within shouting distance to gather outside Milwaukee’s courthouse square at 2 p.m. More than 5,000 showed up to protest.

There, amid raucous speeches and chanting, lawyer Byron Paine authored a writ of habeas corpus on behalf of Glover which was signed by a county judge and sent to federal authorities. Unimpressed, a federal judge instructed the federal agents in Milwaukee to ignore the writ. By 5 p.m., Milwaukee abolitionists were joined by Sheriff Morris and roughly 100 men who had traveled 30 miles by boat up Lake Michigan from Racine. Within an hour of the Racine delegation’s arrival, the gathering of abolitionists stormed the jail with wooden beams and pick axes, successfully breaking Glover out.

They whisked Glover onto a carriage en route for the Underground Railroad as federal marshals looked on, impotent to do a thing about it. As the carriage passed the massive, cheering crowds, Glover, still bruised and bloody from his earlier beatings, tipped his hat and cried out “Glory, Hallelujah!” Soon after, the Underground Railroad guided Glover into Canada where he lived the rest of his life in freedom.

Booth, the newspaper editor who rallied abolitionists to the jailhouse, was criminally charged for his violation of the federal Fugitive Slave Act. Paine, the author of the habeas corpus writ, defended Booth in court by arguing the Fugitive Slave Act was unconstitutional and therefore void. The State Supreme Court agreed and acquitted Booth. The Fugitive Slave Act had been nullified in Wisconsin.

Under similar conditions, William “Jerry” Henry was broken out of custody in Syracuse by about 2,500 abolitionists in 1851. 26 were tried for helping Jerry escape, and only one convicted. The other 25 were acquitted due to jury nullification being employed against federal law.

In 1850, Vermont passed the Habeas Corpus Act which required the state to “use all lawful means to protect, defend, and procure to be discharged” anyone who’d been “arrested or claimed as a fugitive slave in Vermont.” This explicitly nullified the Fugitive Slave Act which mandated escapees be brought back to their “owners” without trial. While being less confrontational than their compatriots in Milwaukee and Syracuse, Vermont abolitionists knew that local and state judges and juries would employ jury nullification against the Fugitive Slave Act freeing the captured slaves in the vast majority of cases. A few years later, Michigan passed the Personal Freedom Act, a nearly identical law.

Massachusetts’ Personal Liberty Act of 1855 made enforcement of the Fugitive Slave Act a crime punishable by a sentence of up to five years. Further, it mandated impeachment for any state official who aided slave-catchers and disbarred all attorneys assisting in the return of slaves to their “owners.”

Poet John Greenleaf Whittier was among the statesmen of the pro-nullification movement. “Since the passage of the Fugitive Slave Law by Congress, I find myself in a position with respect to it, which I fear my fellow citizens generally are not prepared to justify,” Whittier wrote. “So far as that law is concerned, I am a nullifier.” Abolitionist leader William Lloyd Garrison concurred in an article for The Liberator: “The nullification advocated by Mr Whittier…is loyalty to goodness.”

Slave owners and supporters, on the other hand, despised nullification. The New Orleans Bee, for instance, published a preemptive attack on Vermont’s rejection of federal law: “Fortunately, too, her position is such that she will probably never have occasion to attempt to put into practice her vile theories of nullification. If she ever should, we rely on the President, and on the people of Vermont themselves to bring the State back to reason, and to prove that ‘nullification’ north or south of the Potomac will be put down at all hazards.”

South Carolina Senator and later Confederate President Jefferson Davis made clear his disdain for nullification on numerous occasions. During his U.S. Senate farewell address, Davis explained that the severity of his hatred for nullification precluded him from coexisting in a union with states which practiced it.

“Nullification and secession, so often confounded, are indeed, antagonistic principles. Nullification is a remedy which it is sought to apply within the Union, and against the agent of the States. It is only to be justified then the agent has violated his constitutional obligations…but, when the States themselves and when the people of the States have so acted as to convince us that they will not regard our constitutional rights, then, and then for the first time, arises the doctrine of secession in its practical application.”

Many years later in his 1881 book The Rise and Fall of the Confederate Government, Davis bemoaned the effect nullification had on the practice of slave catching.

“[State legislatures] made use of the powers and opportunities of the offices held under its sanctions to nullify its obligations and neutralize its guarantees. The halls of Congress afforded the vantage ground from which assaults were made upon these guarantees. The legislatures of various Northern states enacted laws to hinder the execution of the provisions made for the rendition of fugitives from service; state officials lent their aid to the work of thwarting them; city mobs assailed the offices engaged in the duty of enforcing them.”

In the years preceding slavery’s abolition, nullification was practiced exclusively by abolitionists to the acute dismay of the slave states. To oppose nullification in the context of American history is to side with the slavers. Unfortunately, a rewriting of history by statists has cut Americans off from the knowledge of these nullifiers who acted heroically in defiance of evil. That’s a sacrifice most government schools and textbook authors are willing to make lest they disseminate information that threatens the narrative of federal-government-good, racist-crazy-eyed-nullifiers-bad.

Falsehood #4: Nullification Undermines the Tenets of Our Republic

The idea that unconditional submission to the evil and illegal usurpations of tyrants is a tenet of the American republic is one of the most crackbrained idiocies ever claimed about the nature of the United States. Greg Treat somehow manages to state the exact opposite of the truth on these issues in a way that almost seems impossible for anyone who’s not trying to do so.

If the federal government ordered that State Senate Pro Tems had to oversee the executions of all newborn sons, Treat would appear willing to comply, and consider it an act of patriotism. You might say that’s an exaggeration, but is it? Treat has made certain for the past three years that the Oklahoma State government remains the overseer of the murder of more than 5,000 babies annually, claiming adherence to “the tenets of the republic” as he does it.

As has been shown, the most accurate way to understand the truth about something Greg Treat says is to figure out what the exact opposite of what he said is, and then safely assume that that’s the truth. This principle applies here as well.

Treat claims to add real teeth to the bill. In reality, HB1236, as passed by the House, had teeth. It provided for the manner in which a state would defy the unconstitutional federal usurpation: “Notwithstanding any other provision of law, the state, county, political subdivision or any other publicly funded organization shall not implement any action that restricts a person’s rights or that the Office of the Attorney General or the Legislature by a majority vote determines to be unconstitutional under subsection A.”

Treat’s amendment provides 10 million dollars over the next four years for the creation of a “State Reserved Powers Protection Unit Fund” within the Office of the Oklahoma Attorney General to make recommendations to the attorney general regarding whether federal actions violate the U.S. Constitution. If the attorney general agrees with the unit’s recommendation, he may “seek an exemption from the application of the action or seek to have the action declared unconstitutional,” which would presumably occur in federal court. Everyone already agrees that the attorney general’s duties already includes challenging unconstitutional federal actions in federal court, so this bill is essentially spending 10 million dollars over the next four years to do nothing. Treat’s amendment removes all language specifying how the state would prevent implementation of unconstitutional actions, so he has placed an expensive, unaccountable bureaucracy in the way of the federal action being declared unconstitutional and taken all nullifying teeth out of the bill.

If Greg Treat was artful, it could be said that he’s an artful liar. But his lies are so poorly constructed and obviously false that it’s a wonder he maintains the loyalty of the Senate Republican caucus. Their submission to a bumbling, bootlicking, fabricator who is keeping child sacrifice legal in Oklahoma reflects poorly on them for choosing him to lead the caucus. They should take action to remove him from his position as Pro Tem at their soonest opportunity to do so. 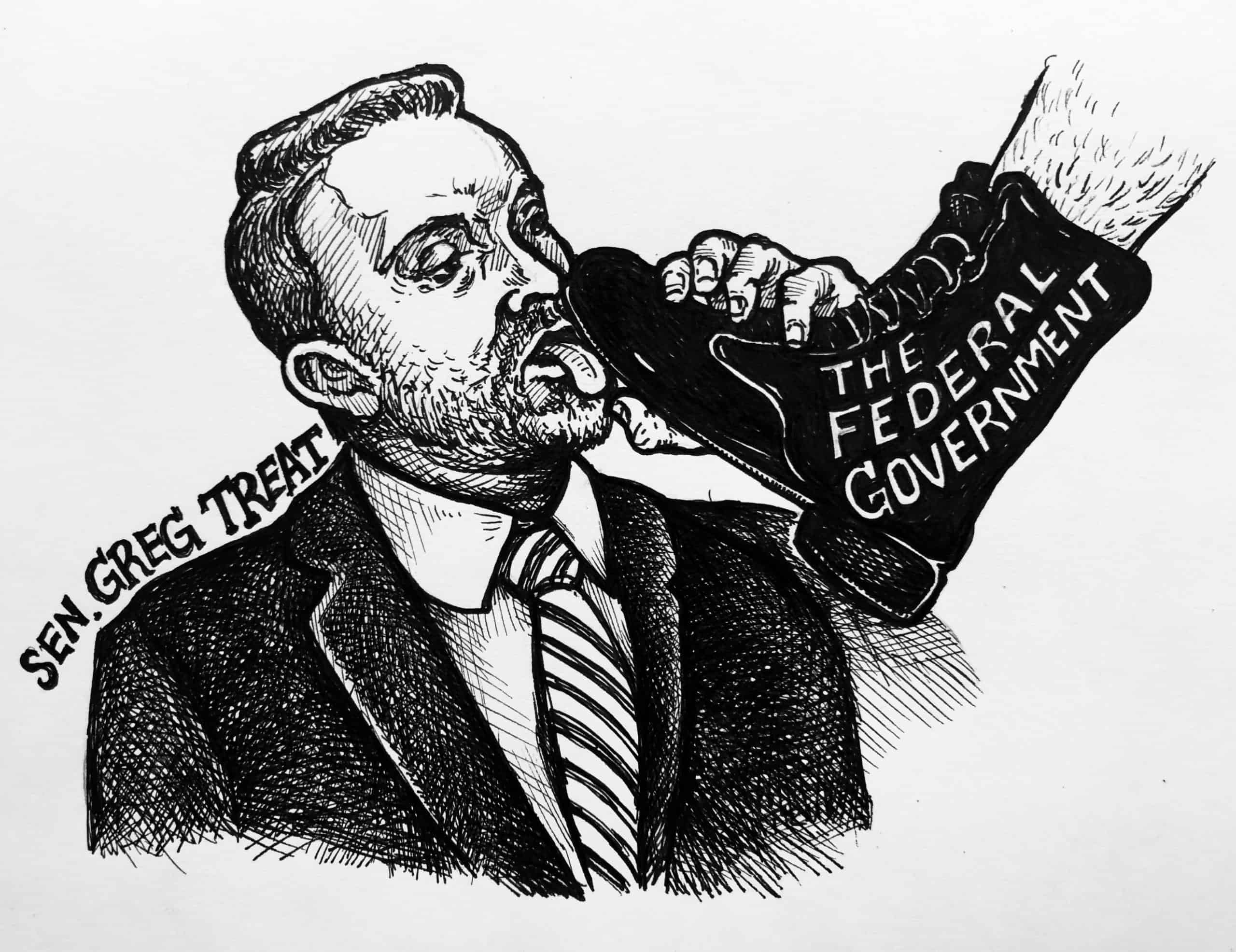