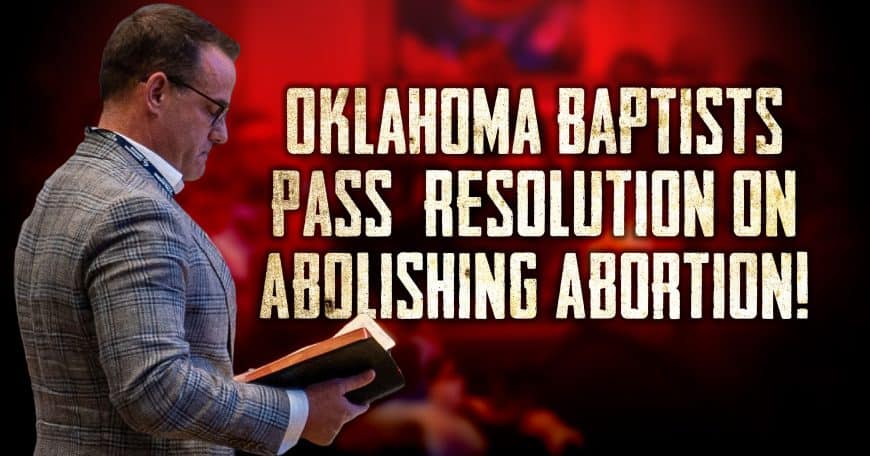 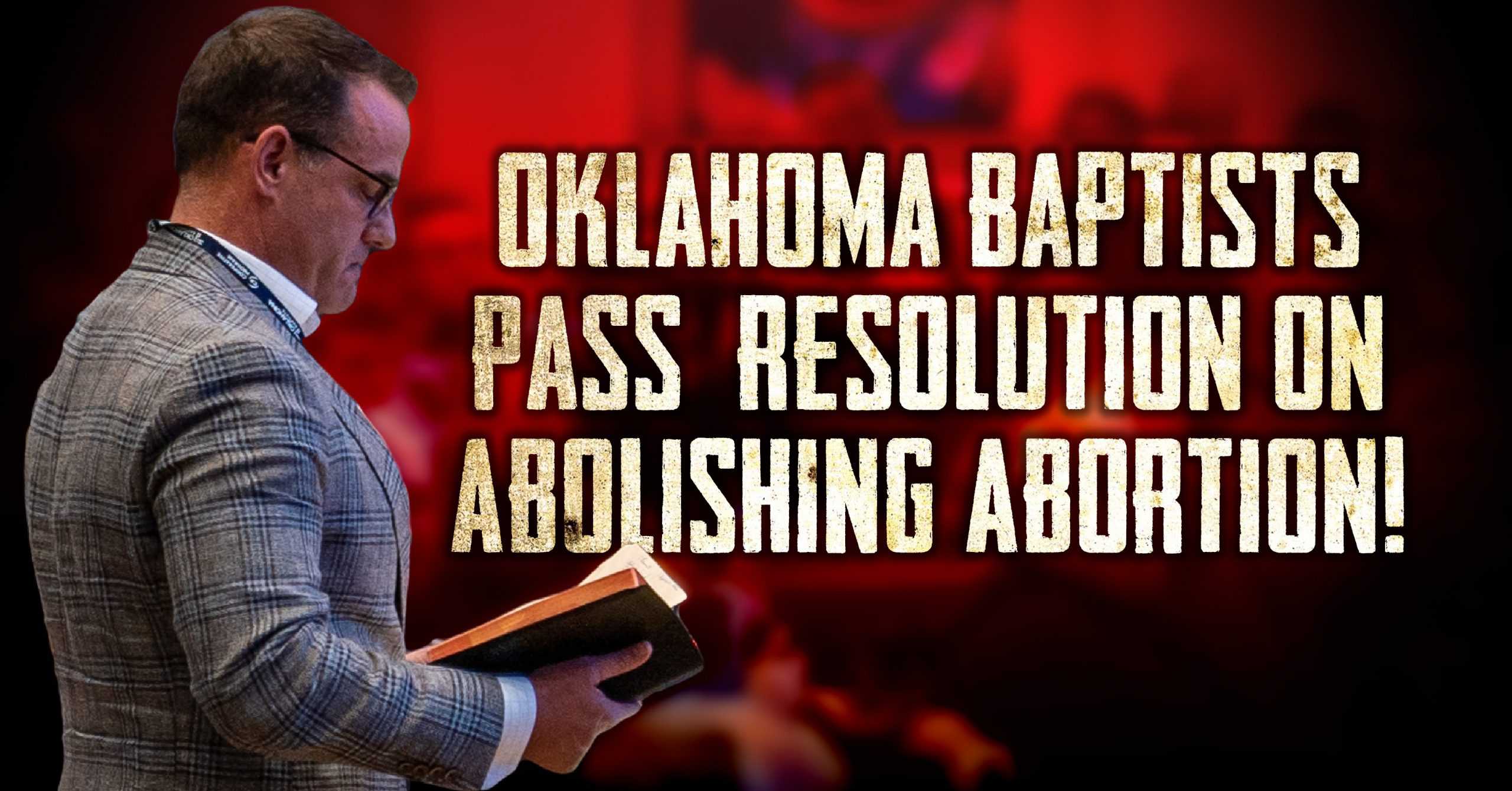 On Tuesday, Oklahoma Baptists became the fourth Southern Baptists state convention this year to pass a resolution calling for the immediate abolition of abortion following Arkansas, South Carolina, Utah-Idaho. All of these follow the Resolution on Abolishing Abortion passed by the Southern Baptist Convention (SBC) in June.

The Oklahoma resolution reaffirmed the language passed by Oklahoma Baptists in 2019, and the SBC resolution from this summer. Below is the language of the resolution with amendments added during the discussion process in bold.

We, the messengers to the 2021 Annual Meeting of Oklahoma Baptists, meeting at Southern Hills Baptist Church, Oklahoma City, Oklahoma, November 15-16, 2021, believe in the sanctity of human life beginning at conception, that every person—preborn, born and unborn — is created in God’s image and deserves life. We echo and underscore the emphatic resolutions on ending abortion previously approved by Oklahoma Baptists in 2019 and by Southern Baptist messengers in June of 2021, both of which called for the immediate end, the abolition of abortion, without exception or compromise. With God’s grace, we work to see a day in which every unborn child in Oklahoma and America is protected and valued.

The most important amendment is the final one — making clear that what is being called for is the immediate abolition of abortion. Blake Gideon, the convention’s immediate past president, offered the amendment, saying to the Committee and the convention:

“I know you’ve wrestled with this issue and I appreciate you very much. But I would like to call for clarity and strength in this resolution… One of the things I love about the Bible is the clarity and strength of scripture. I believe that our resolutions need to not only be scriptural, I believe they also need to reflect the tone of scripture. That is the purpose for this amendment…

“We live in a day where there’s a culture of death all around us, and we can’t tiptoe around issues. We must be clear and we must be strong. 20 children today will be murdered in the state of Oklahoma.”

Gideon’s amendment was not received as friendly by the Resolutions Committee. The language did nothing but spell out more clearly the obvious implications of the two previous resolutions being affirmed, making it very puzzling that the Resolutions Committee opposed the amendment. If the committee truly supported the resolutions it is claiming to affirm, the amendment should not have been received as anything but a helpful clarification.

The fact that there are non-abolitionists within Oklahoma Baptists is precisely why the clearer language is necessary. The amendment would only be redundant and unnecessary if there was already uniform agreement on the subject. Beyond that, the Committee’s own opposition to the amendment is further proof of the resolution’s necessity. Incrementalism and incrementalist politicians are the only things keeping abortion legal in Oklahoma. That ideology is what needs to be specified and rooted out.

“As one of the primary authors of the 2019 amendment that was presented to Oklahoma Baptists, and then the 2021 SBC Resolution on Abolishing Abortion that was passed this summer, I can tell you that the unifying, prophetic, and Biblical call that united both the 2019 Oklahoma Baptists and the 2021 SBC was that urgent line that called for the abolition of abortion immediately without exception or compromise…

“Brothers and sisters, Jesus is King of Kings and Lord of Lords. God’s word is sufficient and clear with all the authority of reigning King Jesus, and it speaks to the thriving of life in God’s world. God’s Word commands ‘you shall not murder.’ If a court writes opinions or decrees, as those in Isaiah 10:1-2, that says women have the right to murder their children, that court is defying God and has blood on their hands. If any law is passed in any state saying when, where and how you can murder a baby, those laws must be abolished as God commands. God’s Word does not say ‘you shall regulate murder.’ It says ‘you shall not murder.’

“Brothers and sisters, the vicious holocaust against our preborn neighbors in the United States over the past 50 years since Roe v. Wade is ten times greater than Hitler’s final solution against the Jews. Oklahomans lead over 5,000 preborn citizens to slaughter every year. We have Planned Auschwitz just like we saw in that video and Trust Women’s Dachau here in the city in the same shopping centers as burger joints and across the street from Churches. We must unite with urgency to say what God’s Word says in truth and grace. If we want revival, we must cleanse our hands of the bloodshed in our state through repentance and revival, and through our laws saying what God says. Not adding to His Word or taking away from it.

“As we were exhorted from Pastor Michael Butler’s sermon on Philippians 1:27-30, because we understand the urgency, we must unite to walk in a manner worthy of the gospel; standing firm with fearless unity. I echo and quote a line from the 2021 Southern Baptist Resolution on Abolishing Abortion: ‘We call upon pastors and entity leaders to use their God-given gifts of preaching, teaching, and leading with one unified, principled, prophetic voice to abolish abortion immediately without exception or compromise.’ Let us unite to affirm this unifying amendment.”

Committee member Dr. Owen Nease of Emmaus Baptist Church spoke next in opposition to the amendment, saying “We were seeking to speak clearly and broadly about the importance of this issue, recognizing that not all Oklahoma Baptists or Southern Baptists would all speak in the same way about it. But we hope that our heart was clear on that and the intent was clear. There’s a lot of language from the resolutions from 2019 or 2021 that might be put in here. As opposed to putting particular language in there, we were seeking to reflect those and at the same time, present a resolution that we would unify around clearly desiring that end of abortion.”

Gideon followed with a point of clarification, saying, “Owen, with all due respect, I appreciate your desire for wanting there to be unity; there is nothing about the amendment that we’ve offered that is disunifying. It only clarifies what you’ve already stated in [the resolution].”

Pastor Brandon Allen of Ekklesia Muskogee then called the convention to a vote, and the overwhelming majority supported Gideon’s amendment. According to Deevers, roughly three-fourths of the messengers voted in favor.

David Dunsworth of Northside Baptist Church then motioned to amend the resolution by adding language about life beginning at conception, and adding the word “preborn;” a motion which was affirmed by the messengers.

During deliberation on Dunsworth’s amendment, Lawton First Baptist Church Pastor and former Oklahoma Baptists First Vice President Mike Keahbone attempted a motion to undo all of the amendments, saying, “To sit here and argue over semantics and redundancy is ridiculous. I motion that we cancel all the amendments.” His motion was ruled out of order, as amendments already adopted cannot be canceled.

Keahbone also argued that in discussing whether to specify the call for immediate abolition, the convention was “missing the heartbeat where this is really at.” He touted the 704 mothers helped by Hope Pregnancy Centers, before saying, “I don’t think there’s any question where we stand as Oklahoma Baptists on the issue of abortion.”

If pro-life incrementalism weren’t unbiblical, and if it weren’t the very thing keeping abortion from being abolished in Oklahoma, then we could all agree to disagree and be on the same team, as Keahbone desires. But incrementalism is unbiblical, and it is keeping abortion legal in Oklahoma. As such, it must be rooted out of the Church, for the sake of our obedience to Christ and our prophetic witness to the world.

“We are not arguing over semantics. We are looking to clarify a statement for a lost and dying world. The world around us plays word games with what we say. If you look at how they report events that occur in Baptist life, you will see it distorted beyond recognition. We need to be absolutely clear in how we say what we say.

“This is not a unity issue. We agree on everything that’s been said [in the resolution]. We’re trying to frame [the wording of the resolution] in such a way that the lost world will have to deal with it the way we said it… So let’s struggle through this, and let’s do this well. And honor our Lord in the process.”

The lost world and even professing believers in the legislature will and have attempted to twist previous resolutions. The passage of the 2019 Oklahoma Baptists resolution was a tremendous 180 degree shift for the convention, whose leaders had previously opposed the Abolition of Abortion in Oklahoma Act publicly. Yet, Senate Pro Tem Greg Treat — a pro-life professing Christian, and the primary opponent of abolishing abortion in Oklahoma — commented to the Muskogee Politico that the new abolitionist resolution was no big deal because the convention was simply standing for life as it always had. Clarity is crucial, and now the convention has it.

The clear direction given by the messengers of the national and Oklahoma conventions is for immediate abolition without compromise. This has implications for how the leaders of Oklahoma Baptists should be leading. New Oklahoma Baptists President Chris Wall and new Executive Director Todd Fisher hold a tremendous amount of influence on public policy in our state. Wall and Fisher must, as the 2021 resolution laid out, “use their God-given gifts of preaching, teaching, and leading with one unified, principled, prophetic voice to abolish abortion immediately without exception or compromise.”

This means loudly speaking on behalf of the Abolition of Abortion in Oklahoma Act. It means no more championing incremental bills and incrementalist politicians at Rose Day. It means partnering with Oklahoma-based abolitionist organizations like Rescue Those, Liberty Rising, Southern Baptists for Abolishing Abortion, and Free the States instead of incrementalist Roman Catholics like Abby Johnson, Tony Lauinger, and Brett Farley. It means leveraging all of their resources and influence for the immediate establishment of justice, as they would if it were their own head on the chopping block (Mark 12:31).