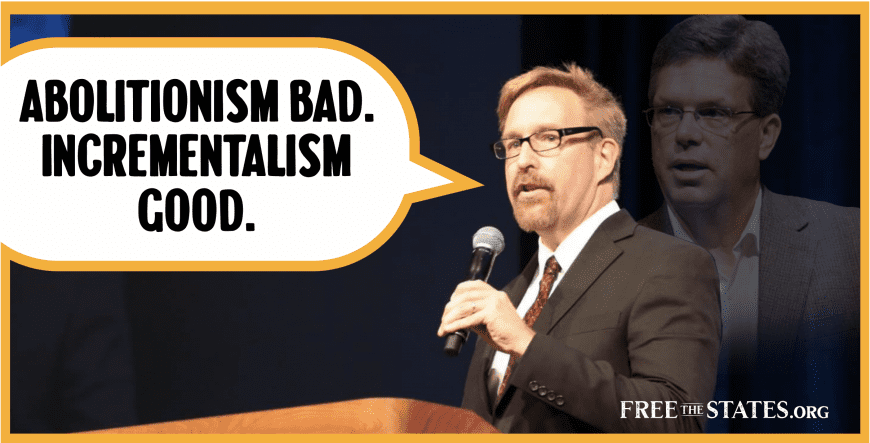 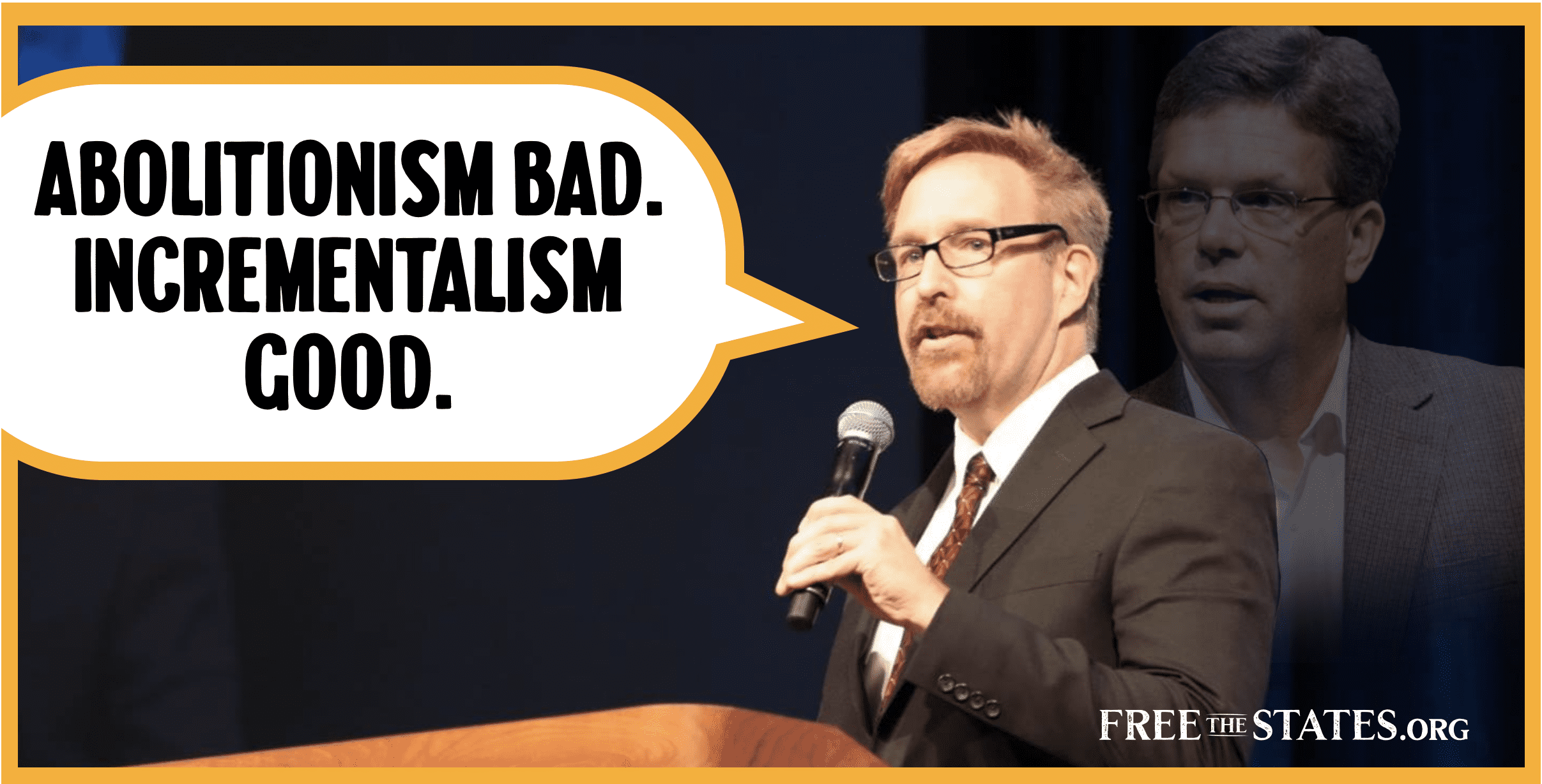 On Wednesday, Scott Klusendorf and Marc Newman published an article for Townhall defending pro-life incrementalism in response to the recently passed Southern Baptist Resolution on Abolishing Abortion. The resolution was a thoroughly biblical, decidedly abolitionist document that called for the “immediate abolition of abortion without exception or compromise.” Sounds great, right? Not to Klusendorf and Newman. For many, their response defies explanation. How can two professional pro-lifers who dedicate all their time to ending abortion be so opposed to a resolution calling abortion “murder,” demanding its “immediate” end, and calling for repentance of “apathy” regarding the holocaust taking place in our midst?

One would think these pro-life professionals were responding to a pro-abortion resolution. Indeed, Klusendorf and Newman go so far as to lump abolitionists in with the likes of Planned Parenthood and the abortion industry, “To the extent abolitionists succeed, the SBC will find itself fighting against abortion restrictions; an unwitting ally of Planned Parenthood. The latter fight them because they want unrestricted abortion; the former will fight them out of a misguided sense of ideological purity. The result will be the same: more dead children.”

But is abolitionism “a misguided sense of ideological purity?” Let’s examine the arguments and find out.

Perhaps the most fundamental mischaracterization of the abolitionist position throughout the article is the false notion that abolitionists believe abortion will “magically” disappear just by fiat declaration, the intellectual equivalent of Michael Scott yelling “I declare bankruptcy!” and expecting his financial situation to change. Indeed, the authors write, “The abolitionist response is a kind of magical thinking: just decree it.” This notion is inextricably linked to the frequently touted incrementalist idea that “current political realities” make immediate abolition impossible. Due to the popularity of this strawman, we shall refer to it as Scott’s Magical Declaration Fallacy, in honor of Michael Scott and Scott Klusendorf. (Incidentally, after this article was written and unbeknownst to me Dana Hall McCain committed this fallacy in her article about the resolution; see James Silberman’s response here).

Abolitionists – the non-hyper-charismatics among us, at least – are under no such misconception that declaring abortion abolished will magically rid us of it. The fact of the matter is abolitionists fundamentally disagree with Klusendorf and Newman on what constitutes a “political reality.” Abolitionists are under no impression that defying the federal government is an easily achieved task. But it is quite absurd to say that doing so is impossible. It is done regularly on the topic of guns, marijuana, immigration, and other issues. Incrementalists often respond that defying the federal government over abortion will be more difficult than defying for those issues, which is true. But that doesn’t mean it’s impossible. It was done over much more controversial issues like slavery.

The supreme court is not the Supreme being. We do not believe for one moment that Klusendorf and Newman would go along with a supreme court decision that allowed for government officials to seize children and sell them into sexual slavery until they reach the age of eighteen, nor do we believe they would go along with a decision to legalize all murder. The issue here is one of ageism, not of strategy. If we truly believe our preborn neighbors are full human beings, image-bearers of God, and if we are truly loving them as ourselves, there simply is no time for patience and no excuse for obedience to the rogue court.

The fact is, there is a point where government descends into such depravity and injustice that defiance is the obligation of all of its subdivisions. When this point is reached, compliance with the injustice becomes wicked. And if that point has not currently been reached with abortion – with three thousand unborn people slaughtered every day – it never will be. According to Klusendorf and Newman, the supreme court’s authority is ultimate; it is “reality,” or at least as far as our society is concerned. As Klusendorf has said elsewhere, “the federal courts have already decided in Roe vs. Wade, the Casey decision, and others, that no unborn children have the right to life. They’ve already dictated that from on high.” Abolitionists are not demanding governments defy the laws of nature or break the fabric of reality. We are demanding they defy the supreme court and obey the Constitution and God’s word by protecting our little preborn neighbors.

Beyond any kind of argument from the way our government has been set up or what our culture is willing to accept is the notion that Christ is on the throne and all the earth belongs to Him (Matthew 26:64, Matthew 28:18). Christ owns America and every level of Government are deacons of His wrath against evildoers (Romans 13:4). Their obligation is to punish evildoers for doing evil, and our obligation is to disciple them to do that in obedience to Christ (Matthew 28:19–20). None of that has to do with misguided ideological purity. It has to do with fulfilling the Great Commission and loving our preborn neighbors as ourselves.

Newman and Klusendorf devote a couple paragraphs to making their thoughts known about abolitionists, as if this was relevant to whether it’s right to make immediate abolition the Christian standard. Both of these men know the difference between honest and dishonest argumentation. They know how to sniff out a genetic fallacy. Even if abolitionists were as bad as they say they are, so what? Does that change anything about the argument? Does that add anything of substance or worth to the discussion? No.

One of the abolitionists they cited as an example of bad behavior was abolitionist pastor Bill Ascol. They faulted him in their characterization as saying, “Baptist churches should summarily disfellowship politicians who don’t vote along abolitionist lines.” A reader might be led to believe Ascol is calling for the disfellowship of legislators who support incremental bills when the actual context Newman and Klusendorf conveniently leave out is that Ascol was calling for pro-life politicians in Oklahoma – who have been solely responsible for killing the bills of abolition – to be disciplined.

Klusendorf and Newman claim, “abolitionists falsely claim that if you’re not with them, you’re evil.” This is false. We do not claim, “if you’re not with us, you’re evil.” We claim that if you’re against Scripture, you need to repent and submit to Christ. Abolitionists appeal to the standard upon which all men will give an account: Scripture. That is the nature of the disagreement; abolitionists believe regulating murder is sin because it gives approval to murderers (Romans 1), allies with wicked rulers (Psalm 94:20), and decrees iniquity (Isaiah 10:1-2). They can argue that incrementalism is less iniquitous than current abortion laws, but they cannot argue that abortion regulations are not themselves iniquitous.

Despite the assertion that abolitionists oppose incremental bills “all because these efforts didn’t achieve total abolition,” the real reason is because we oppose ungodly increments that treat abortion as healthcare instead of like the holocaust that it is, all while acknowledging that the effort to abolish abortion will gain steam in increments – the resolution itself being a godly increment to that end. No human court has the authority to legalize child sacrifice. We are not “bad faith actors” or extreme for believing the pro-life strategy is based on the wisdom of the world instead of the Word of God. Klusendorf and Newman would do well to stick to the argument instead of attempting to discredit faithful pastors like Bill Ascol.

Klusendorf and Newman assert that, “By insisting on ‘prophetic’ purity, the abolitionist position trades actual lives that could be saved right now for hypothetical ones they hope can be saved at some undisclosed future date.” This is blatantly false projection. Abolitionists are not obstructionists; pro-lifers are. Every year a bill of total and immediate abolition is proposed in Oklahoma, it is pro-lifers who kill it. The fact is, abolitionists do not have the votes in any state government to kill incremental bills, and if they did they would immediately pass an abolition bill and establish justice for our preborn neighbors making incremental bills forever irrelevant. The only uncertainty as to an “undisclosed future date” is when pro-life politicians will stop killing abolition bills.

Further, we reject the assertion that abolitionists are sacrificing any lives. The exact opposite is true; pro-lifers explicitly or implicitly sacrifice some babies today in the hopes of saving other babies tomorrow. These regulatory bills are used as the excuse to delay the abolition of abortion, and – had it not been for that delay – every baby in a state like Oklahoma would not have been murdered. In such states, the abortion rate is going up – not down – despite being one of the most pro-life states in the Union and having record amounts of regulatory laws on the books.

Klusendorf and Newman can posture all they like, but it is pro-lifers who kill abolition bills, not the other way around. The lunacy of pretending that pro-lifers are protecting all the babies they can while a legalized genocide has plagued our land for nearly 50 years cannot be understated. It is no victory nor is it wise to continue the same strategy indefinitely until the court changes its opinion. Prioritizing obedience to the court’s rule above God’s rule has borne its fruit: 60 million dead children. It’s time for the states to rise and abolish abortion in defiance of Roe now.

Despite what its strawmen might try to depict, abolition is not a pie in the sky idea proposed by deluded or confused wannabe magicians. Abolition is a biblical, consistent, righteous response to legalized genocide. It acknowledges the truth that all humans are made in the image of their Creator; it treats abortion like the holocaust that it is; it demands righteousness from the government in defiance of lawless, unconstitutional opinions of a rogue court; and, above all, it asserts that Christ is on the throne, not man, and He gives life and takes it away, graciously numbering the days of men, commanding righteousness be established in the gate.

This is not magical thinking or pointless perfectionism or whatever incrementalists want to call it. It’s just consistent Christianity.

This article is part of a series of responses to pro-life SBC leaders who have come out against the Resolution on Abolishing Abortion. Read the others below.

This isn’t the first time we have responded to Scott Klusedorf. See James Silberman’s article here.