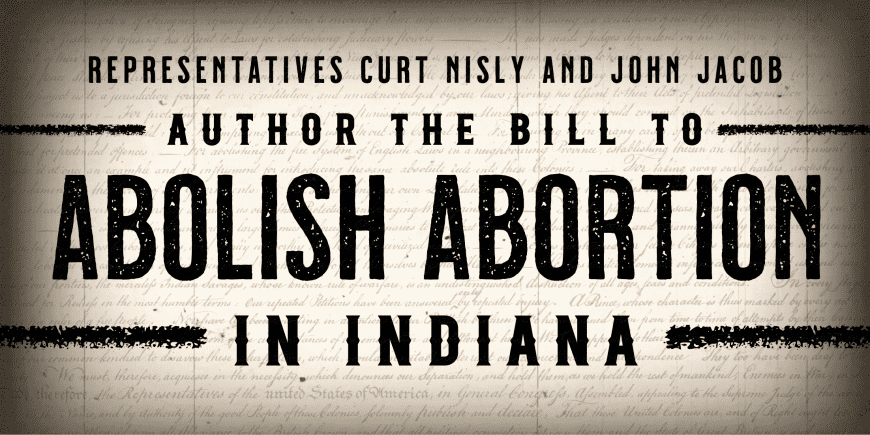 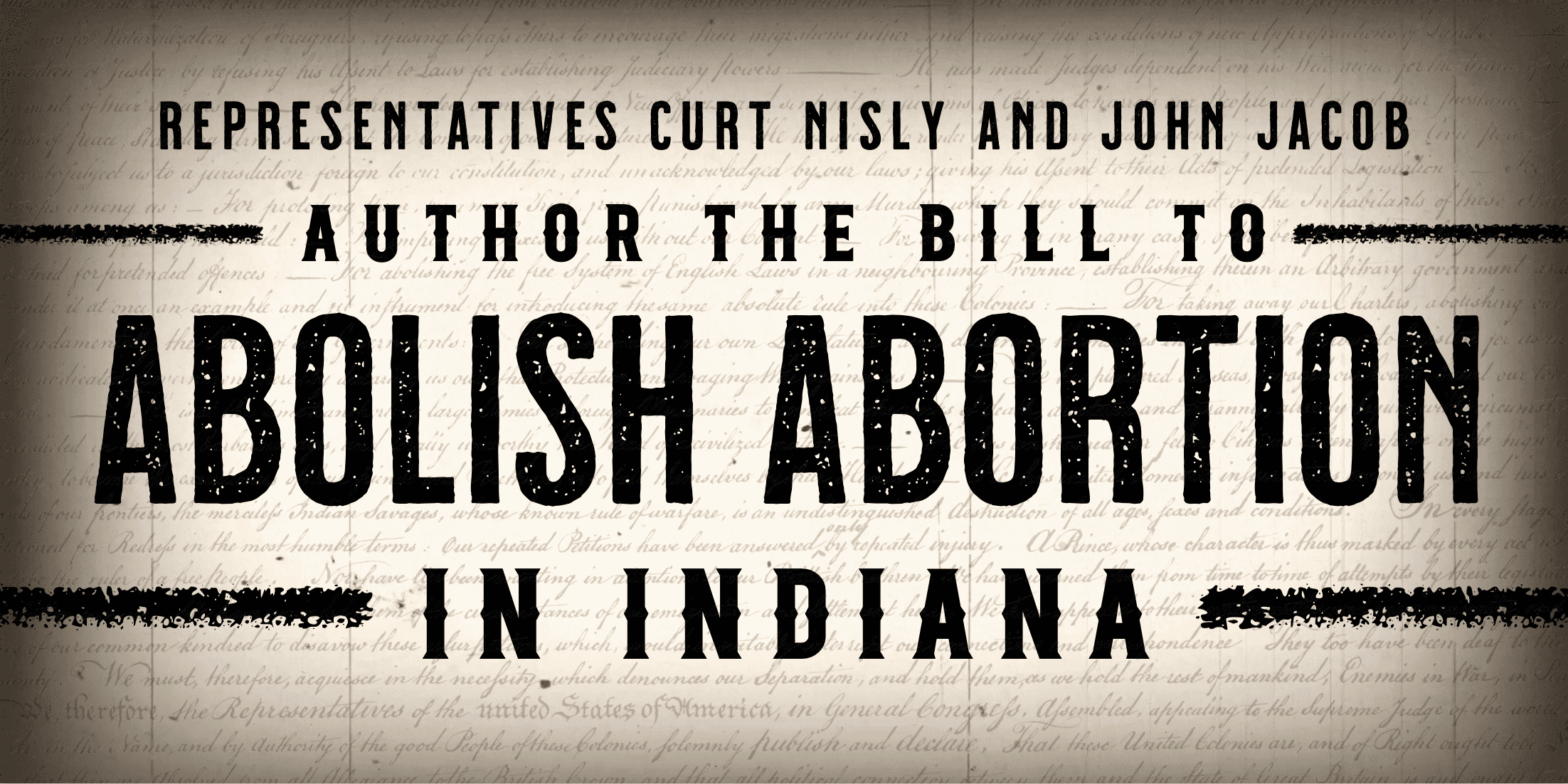 The Indiana Protection at Conception Act (HB1539) was filed on Thursday by State Rep. Curt Nisly (R-Goshen) and was coauthored by newly elected Rep. John Jacob (R-Indianapolis). This is the fifth consecutive session that the bill has been introduced.

HB1539 would totally and immediately abolish abortion in the state. It has been assigned to the Indiana House Judiciary Committee, which is made up of nine Republicans and four Democrats, and is chaired by Rep. Jerry Torr (R-Carmel).

The primary function of the bill is its addition of an Article 51 to the Indiana code. Chapter 1 of the new article establishes that life begins “when a human ovum is fertilized by a human sperm.” Chapter 3 gives legal justification for the abolition of abortion:

Chapter 4 of the proposed Article 51 directs all agents of the State of Indiana to enforce the legislation regardless of any contrary federal actions which violate the God-given and Constitutional right to life.

Sec. 1. (a) Any act, law, treaty, order, rule, or regulation of the United States government that fails to protect a person’s inalienable right to life is null, void, and unenforceable in Indiana.

(c) Any court decision purporting to:

(1) strike down or enjoin the provisions of this article or a public law enacting this article; or

(2) enjoin the state of Indiana from protecting innocent human physical life from the moment of conception; shall be treated as nonauthoritative, void, and of no force.

Sec. 4. Indiana’s interest in protecting innocent human physical life from the moment of conception shall be enforced by Indiana government officials and agencies, regardless of any court decision to the contrary. All Indiana officials and agencies shall comply with this article and any public law enacting this article, consistent with the Declaration of Independence, the written Constitution of the United States, the Ninth, Tenth, and Fourteenth Amendments to the Constitution of the United States, higher Natural Law, and the Constitution of the State of Indiana.

Jacob told Free the States that while many of his moderate colleagues have been less than welcoming to him, he has had some fruitful discussions by pointing his fellow Christian colleagues to God’s word: “I’m having conversations with these guys and I’m saying, ‘If you’re a Christian, you don’t really have an option here. It’s not an option to sit here and say that we’re going to regulate abortion. That is sin. We have to abolish abortion.'”

2021 will be the debut session for new Indiana Speaker of the House Todd Huston. Former Speaker Brian Bosma, a pro-life Republican, had been the primary opposition to abolition, once telling reporters that abolishing abortion was unconstitutional. Bosma also used his power to sideline Nisly because of Nisly’s support of abolishing abortion. According to Jacob, Huston told Jacob and Nisly in a meeting that he wants to “start fresh” and “made it clear to Curt and I that he was going to give our bills a fair shake.”

President of Abolish Abortion Indiana Derin Stidd told Free the States that there are a number of differences between this year and last year which could lead to the bill having more success. “First, we have a brand new Speaker of the House. This reality does bring some new opportunities to the table. Unfortunately, we also know that Todd Houston has been a member of the political class for a long time, and has all the baggage that comes with that. But we want to give him every opportunity to do the right thing, and give the bill a fair hearing,” Stidd said. “The other thing that is different is the that the bill has been assigned to a different committee. In previous years the bill was assigned to The Public Policy Committee, which is where bills go to die. This year it has been assigned to the Judiciary Committee chaired by Jerry Torr. Again, we are hoping that Chairman Torr will simply do the right thing, and give the bill a fair hearing.”

Stidd also noted the growth of the Abolitionist Movement in the state, which he attributed to last year’s abolitionist campaigns for State House seats. “Taylor Isch, Mark Cox, and Russ Reahard ran strong campaigns that rallied people to the effort to abolish abortion in Indiana. Then, of course John winning his primary and going on to win in November brought a huge boost to our movement here. These campaigns opened a huge opportunity to recruit and train activists in our state. We are tremendously grateful for that.”

Jacob’s victory over well-connected incumbent Republican Dollyne Sherman should be a signal to the Indiana House that their regulating abortion isn’t going to be tolerated any longer by the voters. Beyond Jacob’s victory, the organization of the movement of Indiana and the amount of churches getting involved in the battle are quickly changing the political landscape in the Hoosier State.

“People are sick and tired of the do-nothing Republicans who have so departed from even their affirmed platform. And that’s why I won,” Jacob said. “I didn’t run any kind of smear campaign. I just made it clear that I stood for abolition and that my [Republican] opponent stood for the regulation of abortion. People looked at my campaign and said, ‘That’s what I want – abolition.'”

The first step is for the bill is to be heard and passed out of committee. With a pro-life Republican supermajority, Jacob said that the bill needs to receive a hearing.

“The Protection at Conception Act is a good and righteous bill,” Jacob said. “It should be voted on, and with a Republican majority in that committee, there’s no reason it should die in committee.”

Indiana residents should do the following:

If you don’t live in Indiana, share this article with someone who does!