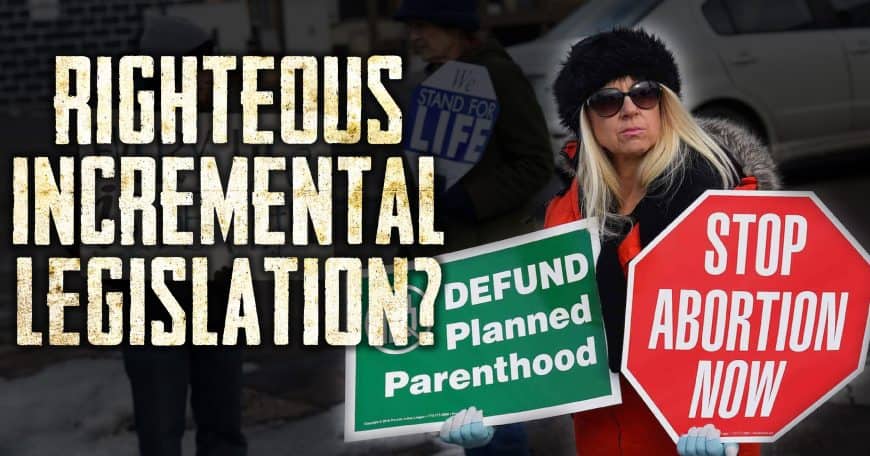 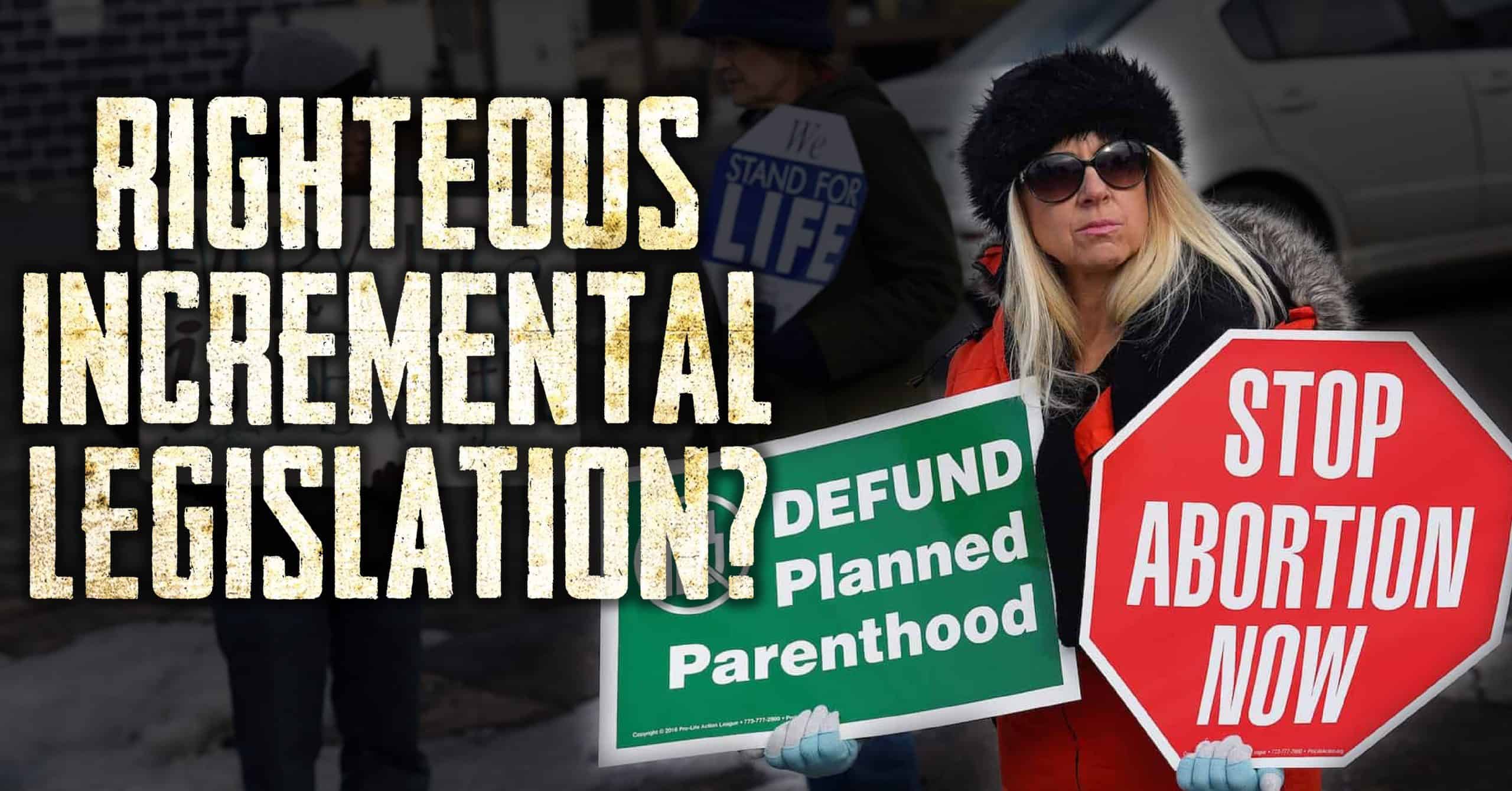 The position of the Abolitionist Movement regarding which bills we support has long been “no bill but abolition.” Any other legislation is either intrinsically unjust or a distraction from the point.

However, among some of those in and around the Abolitionist Movement, a debate has stirred regarding “righteous increments:” incremental bills that do not abolish abortion, but also do not give approval to murder in the way a 20-week ban or heartbeat bill does. A Planned Parenthood defunding bill is one such example.

Those in favor of these bills contest that abortion-related bills are bad if they contradict the truth that life begins at conception, and good as long as they do not violate this truth. Defunding Planned Parenthood does not explicitly violate any Biblical principles, and therefore is a just move in the right direction: a “righteous increment.” The problem with this line of reasoning is that its explicit violations of God’s law are not the only aspect of the case against pro-life incrementalism.

When arguing against pro-life incrementalism, abolitionists often focus on the injustice intrinsic to the vast majority of pro-life bills. For instance, a pain-capable unborn child protection act chooses an arbitrary point at which life is valuable and legally discriminates against those deemed not valuable. This is unjust partiality rooted in ageism, as is a heartbeat bill, 15-week ban, or any other law that instructs abortionists and parents when, where, why, and how to murder children.

But this is not the beginning and end of abolitionism. There’s more to it than simply avoiding technical violations of God’s law. It’s also about being a prophetic witness consistently calling for the repentance necessary for abolition to be achieved.

When we approach a legislator requesting their support for an abolition bill, we are calling them to repentance, whatever terms we choose to put it in. We are asking them to go in a fundamentally different direction than they’ve gone before, and in a fundamentally different direction than they’ve been asked to go by every pro-life group. If they are born again, the Spirit inside of them will then battle against their flesh. If we state the truth plainly and lovingly, they will be convicted to repent of their apathy and compromise. The Spirit will be urging them to author or co-author a law upholding justice, but their flesh will be weighing the political cost, worrying about how doing something controversial like fighting to immediately abolish abortion will affect their relationships, donors, and reelection chances.

In the course of that internal battle, the legislator’s flesh might think up schemes to appease pro-life voters while avoiding the abolition controversy that might cost them the support of the establishment. If their flesh wins out, they will refuse to file an abolition bill and instead champion a born-alive act, 20-week ban, defunding bill, or whatever is the pro-life bill du jour.

If that bill passes, they will be celebrated as a pro-life hero all while being responsible (among many others) for the murder of children in that state. We have seen this time and time again. This is how the pro-life game is played.

Taking this route is the temptation that is before them, and if that’s the route they choose to go down, we can’t stop them; but if we bring to them any of these other pro-life bills alongside an abolition bill, we are enabling their flesh. We are providing the temptation. We have added ourselves to the list of impediments to their repentance. We have brought them abolition’s substitute scheme and told them that it’s good. This principle applies no less to a defunding bill than a 20-week ban or heartbeat bill.

The principle also applies to legislators who we want to vote for abolition bills that have already been introduced. The more of a sense legislators have that they can be celebrated for passing a lesser bill, the less likely they are to abolish abortion. The only way to get them to do the most politically difficult thing is to take the easy options off the table. For as long as they can be celebrated for doing something instead of abolishing abortion, they will do something instead of abolishing abortion. Incremental laws — supposedly righteous or not — legitimize the concept of abolishing abortion incrementally instead of immediately.

Further, there are an infinite amount of ways to regulate abortion; and an infinite amount of bills the pro-life politicians could pass so they can celebrate themselves as pro-life heroes every year. If we allow them to, this is what they will do. This is because the easiest path to reelection is to look like you’re doing something without actually doing anything. The brief video below explains this concept well.

While there are infinite ways to regulate abortion that violate God’s law, there are also an infinite amount of ways to regulate abortion without technically violating God’s law. The “incremental abolitionists” could just as easily have a never-ending stream of incremental victories as the pro-life establishment does; and because of the realities addressed in the previous section, this is where the “incremental abolitionist” position inevitably leads, even if unintentionally.

This position is a denial of immediatism, one of the five tenets of abolitionism. Some “incremental abolitionists” will admit this, and some of them are even going as far as trying to redeem “incrementalism,” as well as “pro-life,” as terms.

The Case For “Incremental Abolitionism”

This is a drop in the ocean. Were Planned Parenthood to be stripped of $82,000/year, they could fundraise off of that and get back ten times as much. We are not hurting Planned Parenthood by defunding them in a state like that. We are playing Politics 101: looking like we’re doing something without doing anything.

The next argument for “incremental abolition” is essentially that playing politics 101 can be a good thing, though “incremental abolitionists” may not put it in those terms. Playing politics 101 games is one way to build contacts and email lists. Having more bills (even if they don’t do anything) is more opportunities to rally people to the capitol and sign petitions. Getting bills passed (even if they don’t do anything) is a way to show politicians and donors that you are an effective organization worthy of support.

This is a fundamentally anti-abolitionist mindset. Abolitionism is about being Christian all the way through. Empty rhetoric, empty legislation, and empty campaigning for the sake of building a larger platform is the way of the world. It’s politics 101. It’s not what abolitionists are about.

One final argument made by “incremental abolitionists” for defunding Planned Parenthood is that we will have to defund Planned Parenthood anyway after abortion is abolished. Fair enough. Defund them after it’s abolished, not when doing so undermines repentance and gives cover to the very politicians and lobbyists keeping the slaughter going.

No Bill But Abolition

“Abolitionism is repentance” isn’t merely a slogan. To repent of apathy and compromise in the abortion holocaust is to work for abortion’s total and immediate abolition. There’s no abolishing abortion without repentance. Repentance is the whole ballgame, and anything that distracts from that should not be pursued by abolitionists. Repentance is where abolitionists must remain laser-focused. That means setting a standard of abolition — equal protection and the defiance of Roe — and not budging from it. It means not enabling the flesh of legislators in their refusal to repent by bringing them easier things to do.

If anyone is still unconvinced that abolitionists should reject defunding legislation and similar bills that distract from abolition, head over to Defy Tyrants and read Pastor Matt Trewhella’s excellent article on this subject. Except for one paragraph regarding footnote 54 of the Roe decision, every argument he makes applies just as pointedly to defunding Planned Parenthood as it does a 20-week ban.

In closing, I want to note that repentance is so important to abolitionism that we are having a whole conference about the power and beauty of it! The theme of the 2022 Abolition Now Conference is “Repent With Us,” and it is being hosted by Edmond’s First Baptist Church (EFBC) in Oklahoma City from February 5th through the 8th. This location is especially significant because the pastor of EFBC is Blake Gideon, the former President of Oklahoma Baptists who wrote a letter in 2019 to every SBC church in the State asking them to oppose the bill to abolish abortion in Oklahoma. He publicly repented of doing so at last year’s Abolition Day rally and in the new documentary A Storm Comes Rolling Down the Plain. His repentance and embrace of abolitionism is bringing about the repentance of many others, and is going to continue doing so. Repentance should not be a scary word and is nothing to be ashamed of. It’s an amazing testimony to God’s goodness that He uses in the most powerful of ways.

The conference will be four days of top-notch training and activism, with the final day including the Abolition Day Rally at the State Capitol. We hope you will join us! Watch the conference preview video below and then register here!

UPDATE: An important clarification is that there is a difference between being putting forward a bill to defund Planned Parenthood and refusing to vote for or sign a budget that includes Planned Parenthood funding. The former is a likely scheme to delay abolition, the latter is not. Righteous governing officials should refuse to support budgets that include funding of depraved entities like Planned Parenthood, even if the amount being allocated is small.

The issue then becomes how we as abolitionists treat the two matters of the budget vs the abolition of abortion. We mustn’t get sidetracked on relatively unimportant things. The main thing has to be the main thing, and if it isn’t, we’re betraying our foundations to play political games. In our rallies and campaigning and conversations with legislators, our demand has to stay focused on the abolition of abortion.

For more on this subject, see Sam Riley’s recent appearance on the Resisting Balaam podcast.