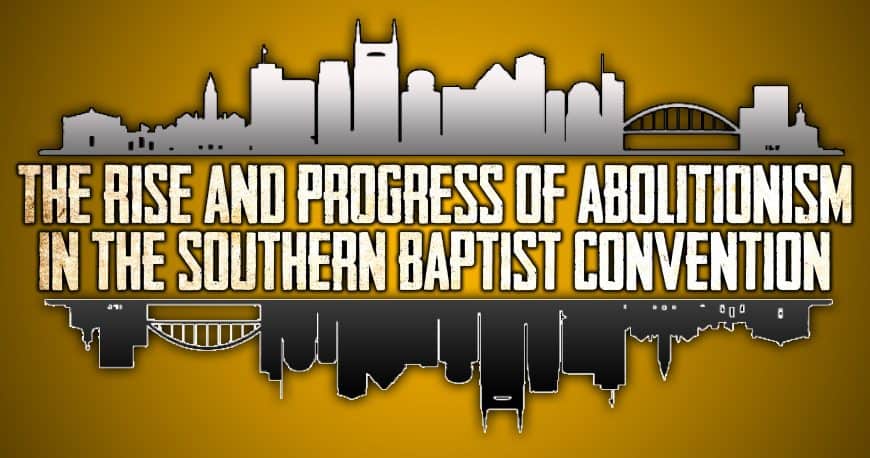 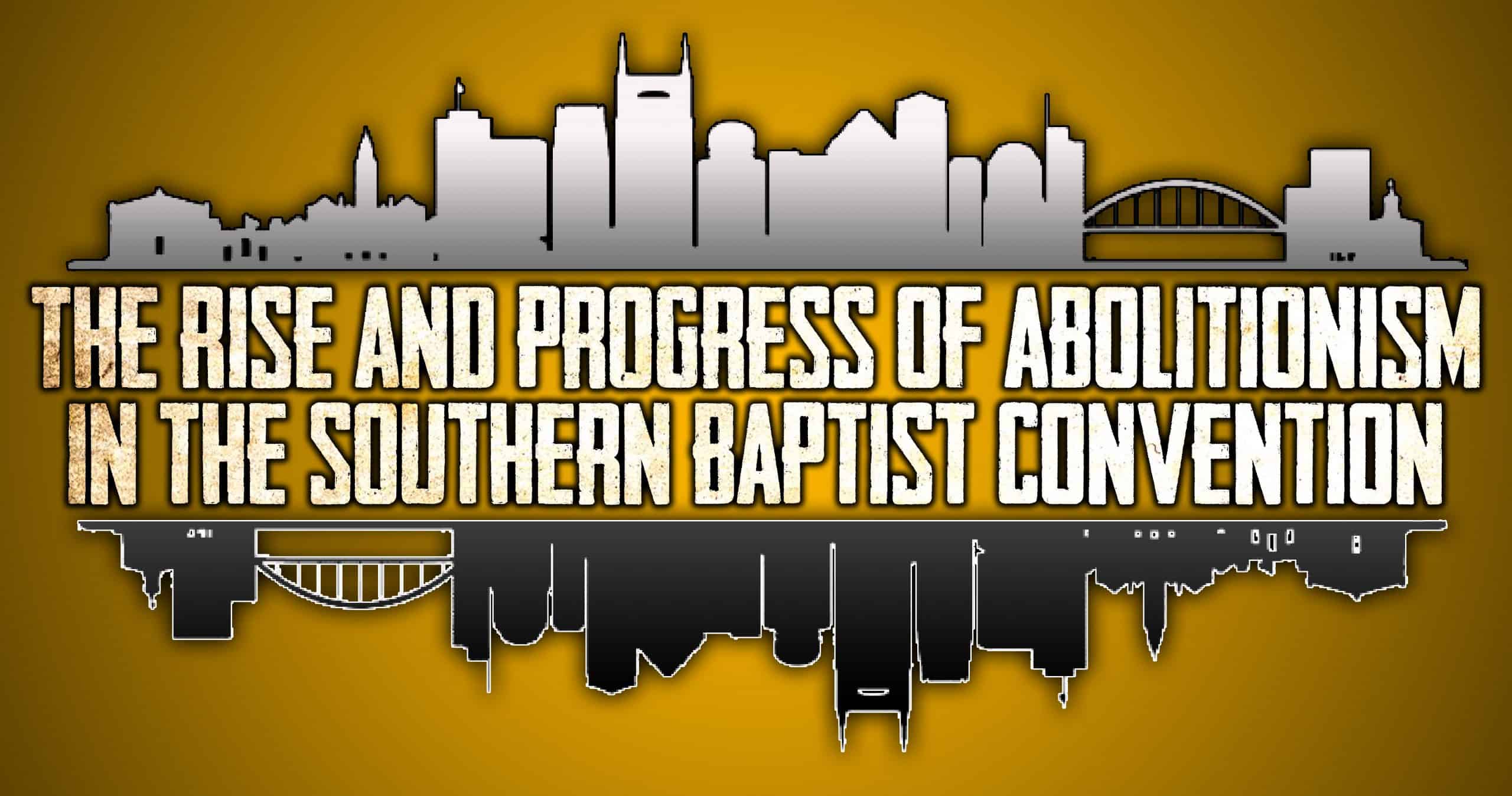 Three weeks ago, the Southern Baptist Convention (SBC) adopted a mold-breaking resolution calling for the “immediate abolition of abortion without exception or compromise,” and further, for the convention to “lament any complicity” in pro-life incrementalism which “compromises God’s holy standard of justice” by establishing “incremental, regulatory guidelines for when, where, why, and how to obtain legal abortion of innocent preborn children.” But this position — known as abolitionism — was not always so welcome in the SBC, to put it mildly.

A decade ago, a small group within a Southern Baptist church in Norman, OK met to discuss supporting the Pro-Life Movement. The task of leading the discussion was assigned to a graduate student in history at the University of Oklahoma.

In preparation, he browsed the websites of prominent pro-life organizations. As providence had it, his historical studies simultaneously led him to the works and biographies of William Wilberforce, William Lloyd Garrison, Elizabeth Heyrick, and other abolitionists who demanded the immediate abolition of the evil of their age in the name of Jesus Christ. Reading about both the Pro-Life Movement and Abolitionist Movement at the same time, he was struck by how little the tactics and messaging of the former had in common with the latter. It was clear to him that the Pro-Life Movement needed reform.

The group was intrigued and excited by his findings, and the Abolitionist Society of Norman was founded as a ministry within an SBC church. The Abolitionist Movement had been reignited.

But unrelated frictions eventually frayed relationships between leaders of the ministry and leaders of the church, which led to frictions over abolitionism itself. The elders were jarred by the seeming accusation of the Society that supporting the Pro-Life Movement wasn’t enough: that for our Christianity to be “vital” – in the phrasing of Wilberforce – we have to repent of apathy and compromise. Many of the core people within the Society, some of whom were on staff at the church, were disfellowshipped.

Undeterred, the Society continued their activism at a new church, and dozens of other societies sprouted all around the country. Bringing with them a gospel-centered and explicitly Christian movement with robust theological foundations, the abolitionists hoped their cause would be taken up by the clergy.

However, slander related to the excommunication seemed to follow them everywhere they went, causing pastors they encountered to reject them, with only a few brave exceptions. Some pastors — even prominent ones like Paul Washer — loved the gospel-centeredness of the movement and said so publicly before the slander frightened them away. Though many Christians in the pews answered the call, the Abortion Abolitionist Movement struggled mightily to make inroads with the American clergy.

Having been shunned by the institutional leaders of Church, State, and Pro-Life Movement, abolitionists turned to cultural agitation over the next six years. Their activism led to abolitionism’s spread to all corners of the country, and even the globe — though Oklahoma would remain the movement’s hotbed.

In 2016, abolitionists finally got the break they had been working and praying for. After meeting with two abolitionists — one of whom was the aforementioned history student — Oklahoma State Senator Joseph Silk became an abolitionist and filed the first bill to abolish abortion immediately in explicit defiance of Roe. Two years later, OK State Rep. Dan Fisher became the first ever abolitionist gubernatorial candidate.

The campaigns to support Fisher and the Abolition of Abortion in Oklahoma Act did not succeed in making Fisher governor or abolishing abortion in Oklahoma, but they succeeded beyond abolitionists’ wildest imaginations in growing the movement. Abolitionists had arrived onto the political scene and were increasing rapidly in number and organization.

Yet, the churches were still holding out, with anti-abolitionist slander related to the excommunications frustrating the upstart movement. But this would all soon change.

On February 21, 2019, the Baptist General Convention of Oklahoma (now called Oklahoma Baptists) proved true what many had chalked up as an abolitionist conspiracy theory, by publishing an open letter to every Southern Baptist church in the state explaining that they, as a convention, were going to oppose Senator Silk’s abolition bill. The response from Southern Baptists in the State was swift and severe. A Southern Baptist “The BGCO Doesn’t Speak For Us” rally was held at the State Capitol. Pastors organized roundtable responses to their convention’s leaders. Incensed Baptists flooded the BGCO inboxes.

Once a few pastors enlisted, dozens and then hundreds more followed. Among the first was Jeff Durbin of Apologia Church who shepherded his congregation and massive online following in an abolitionist direction. The most stunning pastoral conversion came when BGCO president Blake Gideon, who co-authored the letter opposing immediate abolition in 2019, joined the ranks of the abolitionists in 2020. No longer were abolitionists ecclesiological outcasts. Now, they were thundering the cause of equal and immediate justice for preborn children from the pulpits that once opposed them. The paradigm had shifted.

In January 2020, pastor Dusty Deevers of Grace Community Church in Elgin, OK organized a coalition of SBC pastors to begin drafting the Southern Baptist Resolution on Abolishing Abortion. Knowing they had much work to do in convincing the convention of ideas which many were unfamiliar with, and knowing that there would likely be attempts to water down the language, they built an extensive and detailed theological argument. The movement which was reignited by T. Russell Hunter at an SBC church in Norman a decade earlier was on a collision course with pro-life compromise at the Annual Meeting of the largest denomination in the U.S.

The abolitionists arrived in Nashville outgunned in every respect but two. First, and most importantly, they were equipped with a more powerful set of Biblical ideas than their incrementalist opponents: namely, that abortion is murder; it ought not continue another second; and that Christ is King.

But powerful ideas that aren’t heard are a tree falling in the forest. The abolitionists also had the passion and determination to make abolitionism understood. Taking pamphlets to the streets — the longtime modus operandi of the Abolitionist Movement — they put nearly 10,000 abolitionist booklets in the hands of SBC messengers.

Taking on the Committee

The battle was uphill from the start, as abolitionists expected it would be. The SBC Resolutions Committee declined the resolution, arguing preposterously that the murder of preborn children was sufficiently addressed by a funding resolution: “[T]he Committee believes Resolution #3 addresses these issues in the context of the current threats to the Hyde Amendment and related pro-life appropriations riders in the United States Congress.”

Yet, the Committee approved Resolution #8 regarding the ongoing genocide of the Uyghur people in China. This resolution, as opposed to Resolution #3, called for the Chinese government to “cease its program of genocide against the Uyghur people immediately” (emphasis mine). The scandal of an SBC resolution merely calling for taxpayer dollars to not financially support the Uyghur genocide, while stopping short of calling for justice, would be apparent to just about everyone. However, the Committee — and the Pro-Life Movement at large — didn’t grasp how absurd and immoral it is for the Church to fail to be prophetic by stopping short of calling for abortion’s immediate abolition.

Following the presentation of and vote on the ten resolutions approved by the Committee, abolitionist pastor Bill Ascol motioned to force the Committee to bring the Resolution on Abolishing Abortion before the full convention. Overriding the Committee takes a two-thirds majority, which, according to Ascol, had not been successfully accomplished since at least 1979. Ascol said he was hopeful, but not certain that there would be support for the resolution from the messengers. But the response from the messengers to Ascol’s motion was overwhelming, with more than 80 percent voting in favor. The resolution was scheduled for deliberation at 3 p.m. the next day.

When it was brought forward, Ascol again spoke in support, followed by two more testimonies in favor of the resolution and two against. A motion was made by messenger David Norman to table the resolution, which would effectively kill it. Norman argued that “This resolution requires that we walk back from every pro-life resolution we’ve passed.” Ascol refuted this notion: “This resolution doesn’t walk anything back. It walks us forward toward the immediate abolition of abortion without exception or compromise.” The motion to table was roundly defeated. The messengers had no problem with going in a different, more aggressive, and strictly Biblical direction than all previous conventions.

Immediately following the amendment, Ascol called for the final vote. Everyone in favor raised their yellow voting cards, followed by a substantially smaller amount of messengers raising theirs in opposition. One decade after being sent into exile by an SBC church, abolitionism had become the official position of the largest Christian denomination in the United States.

While article 14 no longer makes sense, there are more than a dozen other places in the resolution where incrementalism is referred to as “appalling” and “God-hating partiality” to be “lamented.” Immediatism remains the perfectly clear position of the resolution. The Tennessean wrote that the resolution, as passed, “blasts ‘traditional pro-life laws,’ and that its passage “marks a shift in the formally held viewpoint of the convention.” The New York Times reports that it “calls for the abolishment of abortion and denounc[es] the incremental approach.”

Since the passage of the resolution, pro-life SBC and Ethics & Religious Liberty Commission leaders have worked to repudiate the resolution; but it will be as if they were trying to stop the wind by grabbing hold of it. Abolitionism is the only Biblical response to the abortion holocaust — a fact that the Church is beginning to grasp.

A shortened version of this article was originally published in The Federalist. The full version is published here with permission.