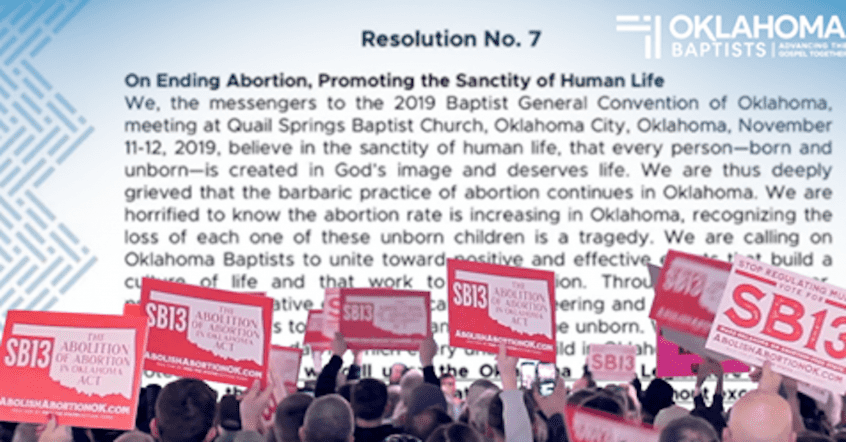 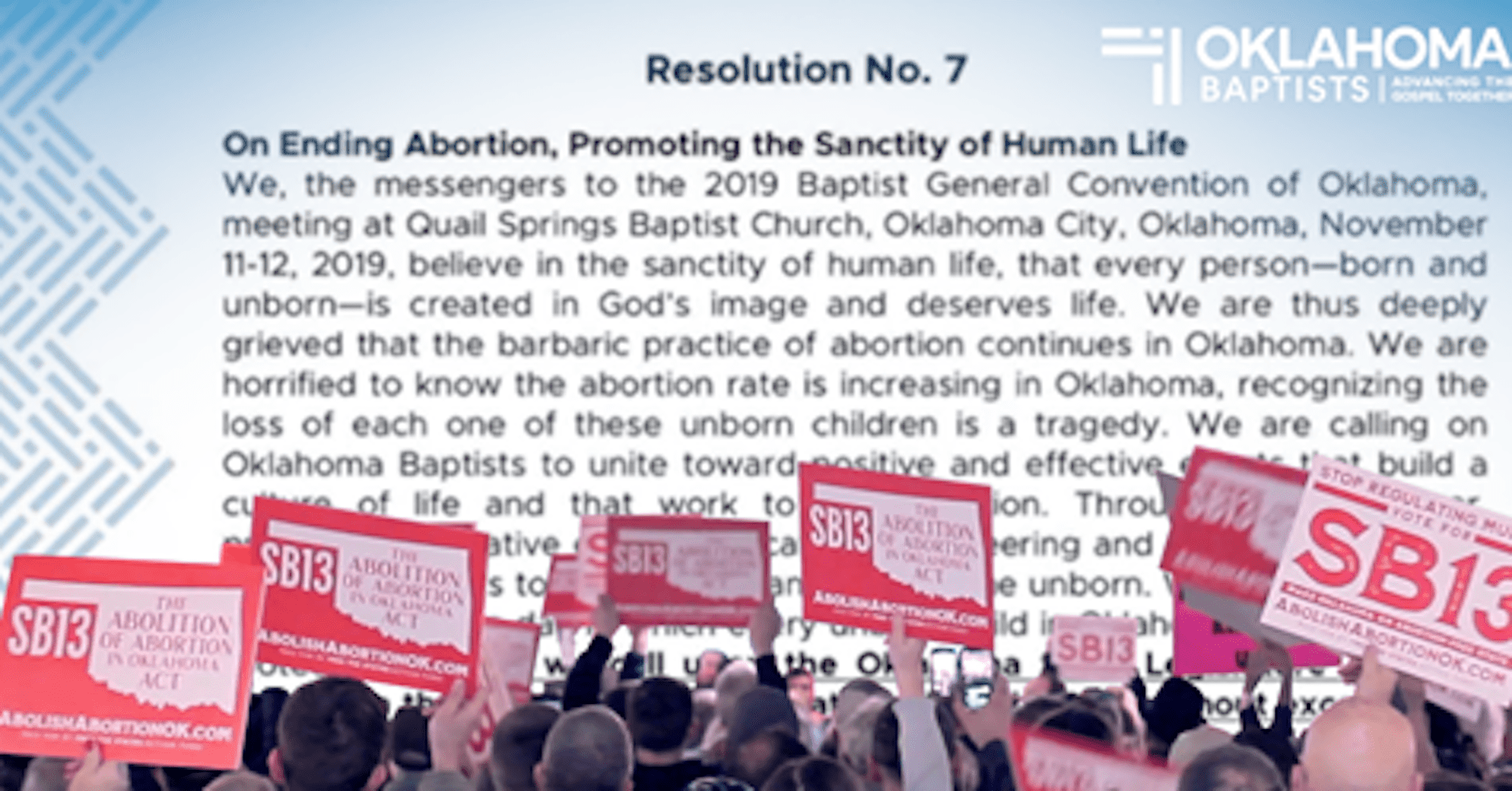 Tuesday’s 2019 annual conference of the Baptist General Convention of Oklahoma (who changed their name to “Oklahoma Baptists” at the convention) brought with it good news for the cause of abolishing abortion. Representatives of the assembled Southern Baptist churches voted overwhelmingly in favor of a resolution calling for an immediate end of abortion in Oklahoma.

Resolution 7 previously read, “We, the messengers to the 2019 Baptist General Convention of Oklahoma, meeting at Quail Springs Baptist Church, Oklahoma City, Oklahoma, November 11-12, 2019, believe in the sanctity of human life, that every person—born and unborn—is created in God’s image and deserves life. We are thus deeply grieved that the barbaric practice of abortion continues in Oklahoma. We are horrified to know the abortion rate is increasing in Oklahoma, recognizing the loss of each one of these unborn children is a tragedy. We are calling on Oklahoma Baptists to unite toward positive and effective efforts that build a culture of life and that work to end abortion. Through fervent prayer, preaching, legislative efforts, education, volunteering and more, we pledge to renew our efforts to promote life and protect the unborn. With God’s help, we will work to see a day in which every unborn child in Oklahoma and America is protected.”

This is a fine statement as far as condemning abortion goes, but it has no specific directive and certainly no endorsement of the abolition of abortion.

Southern Baptist Pastor Brett Baggett of Ekklesia Church Muskogee explained the need for an amendment. “Resolution 7 was a typical pro-life resolution,” Baggett said. “It read more like a proclamation than a resolution. So a few pastors and myself who are from Oklahoma and are part of the Southern Baptist Convention – we came together to propose an amendment to try to make it more explicitly say something like calling the legislators in Oklahoma to pass legislation that would immediately end abortion. Rather than just saying things like, ‘We are pro-life, we want abortion to end,’ we came together to offer the amendment.”

The amendment to Resolution 7 was introduced by Pastor Bill Ascol of Bethel Baptist Church in Owasso, OK. It reads, “Finally, we call upon the Oklahoma State Legislature to enact legislation that calls for the immediate end of abortion without exception or compromise.”

“To our joy, it was approved…” Baggett said. “It almost unanimously passed, and with great cheers and applause. We were excited about that. As the pastor who proposed this amendment said, ‘We want to come away from this meeting giving the leaders of the BGCO something in a resolution that says, ‘This is where we stand.’ And then the leaders can go to the legislature and they can go to our lawmakers and say, ‘Oklahoma Baptists, the messengers gathered at the 2019 convention, spoke and they voted and said this is what we want. We want abortion to end now – without exception or compromise. Immediately.’”

Southern Baptists rally at the Oklahoma State capitol on February 12, 2019 to proclaim “The BGCO Does Not Speak For Me,” and Obey God, Not Man.”

The inspiration for the resolution was instigated in February by BGCO leaders when they announced their opposition to SB13, the Abolition of Abortion in Oklahoma Act. Southern Baptist pastors around the state were stunned and responded by proclaiming that BGCO leadership did not speak for them. A group of pastors organized a round-table discussion to address the false claims of the BGCO’s letter. In addition to the main rally for SB13, a gathering of Southern Baptists had their own rally at the capitol to proclaim that the BGCO’s position is not their position and that the Abolition of Abortion in Oklahoma Act must be passed.

As is the case with many institutions, the leaders of Oklahoma Baptists are less willing to stand up for what’s right when it’s politically risky than the grassroots. Whereas the convention’s leaders have operated thus far on worldly wisdom and have submitted to the Supreme Court rather than God, many Southern Baptist pastors and churches are calling the leaders of the Oklahoma Baptists back to a righteous standard. We are very thankful for the good work of the many Southern Baptists including Baggett, Ascol, and others who helped draft and pass this resolution. In this act, Oklahoma Baptist leaders were delivered a much needed admonition.

While the resolution’s passage is a fantastic development for the cause of abolishing abortion in Oklahoma, there is room for increased specificity in the wording of the amendment to Resolution 7. The word “end” lacks specificity regarding the mechanism by which abortion is to end, which in a formal document establishing a policy position, is important. There are a lot of pro-life people who say things like, “I don’t want abortion to illegal, I want it to be unthinkable.” Such people could agree that abortion should end even though they don’t agree that abortion should be abolished. The words “abolish,” “outlaw,” or “criminalize” would have been more accurate and specific terms for use in the resolution which don’t allow for the wiggle room that “end” does.

“Abolish” is the word we advocate for use regarding efforts to establish equal justice and protection for preborn human beings. It makes a direct connection to the legislation being endorsed (SB13 is officially titled “the Abolition of Abortion in Oklahoma Act”). The word “abolish” also connects the word’s user and hearer to a distinctly Biblical and uncompromising Abolitionist ideology upon which the movement to abolish abortion in the States, as well as previous movements around the world to remove heinous evils from society, are based.

We are already receiving word that Oklahoma Baptist leaders are looking for ways around the resolution. Someone close to Oklahoma Baptist leaders has made us aware of the fact that they, along with their allies in the Oklahoma legislature, are considering supporting a heartbeat bill or even introducing a new bill similar to what Alabama passed earlier this year which purports to end abortion from conception but doesn’t criminalize abortion as murder and only goes into effect pending approval from the Supreme Court. Thus, the Alabama bill is not in effect and Planned Parenthood is actually opening up a new 10,000 square foot mega-facility in Birmingham because they know the bill isn’t going into effect. Bills like this one which give immunity to the parents who have their child murdered (thus depriving preborn human beings of equal protection and legalizing self-induced abortion) and/or submit to the Supreme Court’s evil and unconstitutional opinion on abortion are anathema to abolitionism and to God’s word upon which abolitionism is based.

Full criminalization of abortion as homicide for all involved in the murder and defiance of the Supreme Court are the two primary hangups for people regarding the abolition of abortion, so this new bill would likely lack one or both of these aspects. But the bill’s backers will brand this new bill as the bill that would end abortion, thus deceiving some of the people who would have supported the Abolition of Abortion in Oklahoma Act. Introducing and supporting this bill is the last, desperate attempt of people who know that deceiving people with this sort of bill is the only way to avoid doing what’s right while keeping their credibility. We must all be on the lookout for these sorts of tactics from the pro-life leaders, and be able to distinguish an abolition bill from a pro-life bill.

Though there is some wiggle room in the wording which we fear Oklahoma Baptist leaders may try to take advantage of, the resolution’s passage is an encouraging development and the work of Southern Baptist Pastors who drafted and passed it should be commended.

Hopefully, Oklahoma Baptist leaders Hance Dilbeck (Executive Director), Blake Gideon (President), and Brian Hobbs (Editor of The Baptist Messenger), who wield immense political power, adhere to their convention’s agreed upon principles. We want nothing more than to stand for the abolition of abortion alongside them and will joyfully welcome them into the movement without holding their past opposition to the abolition of abortion against them. But if they do not change course and remain anti-abolitionist, they will not ultimately be needed to abolish abortion. Christians, pastors, and entire congregations of various Christian denominations are getting off the sidelines and making their call for the immediate abolition of abortion as murder heard. Abortion is going to be abolished in Oklahoma with or without Dilbeck, Gideon, and Hobbs, though we hope and pray for unity with them around Biblical principles in this righteous cause.

Let the work of the Southern Baptist pastors and messengers at the Oklahoma Baptist convention be an encouragement as we continue demanding the total and immediate abolition of abortion and continue moving closer to the day when abortion is finally abolished through the establishment of equal justice and protection for preborn humans by the government of the state of Oklahoma. Praise the Lord!

To read about the five components of abolition bill so you are prepared to discern which bills are abolition bills and which are pro-life, see this post.