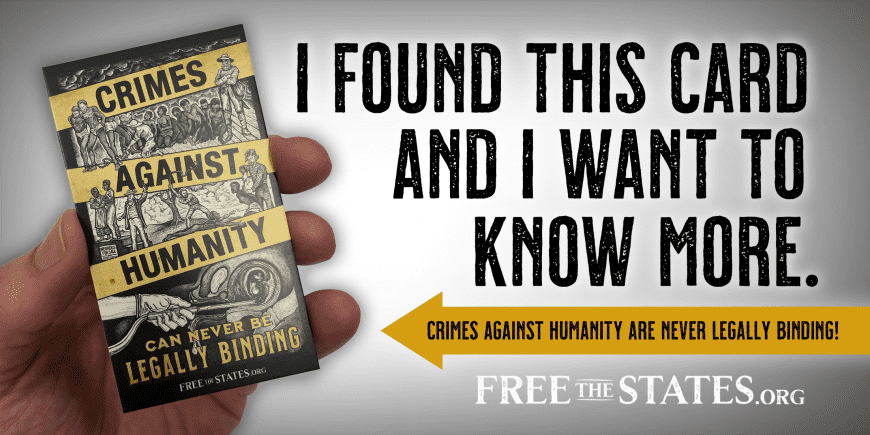 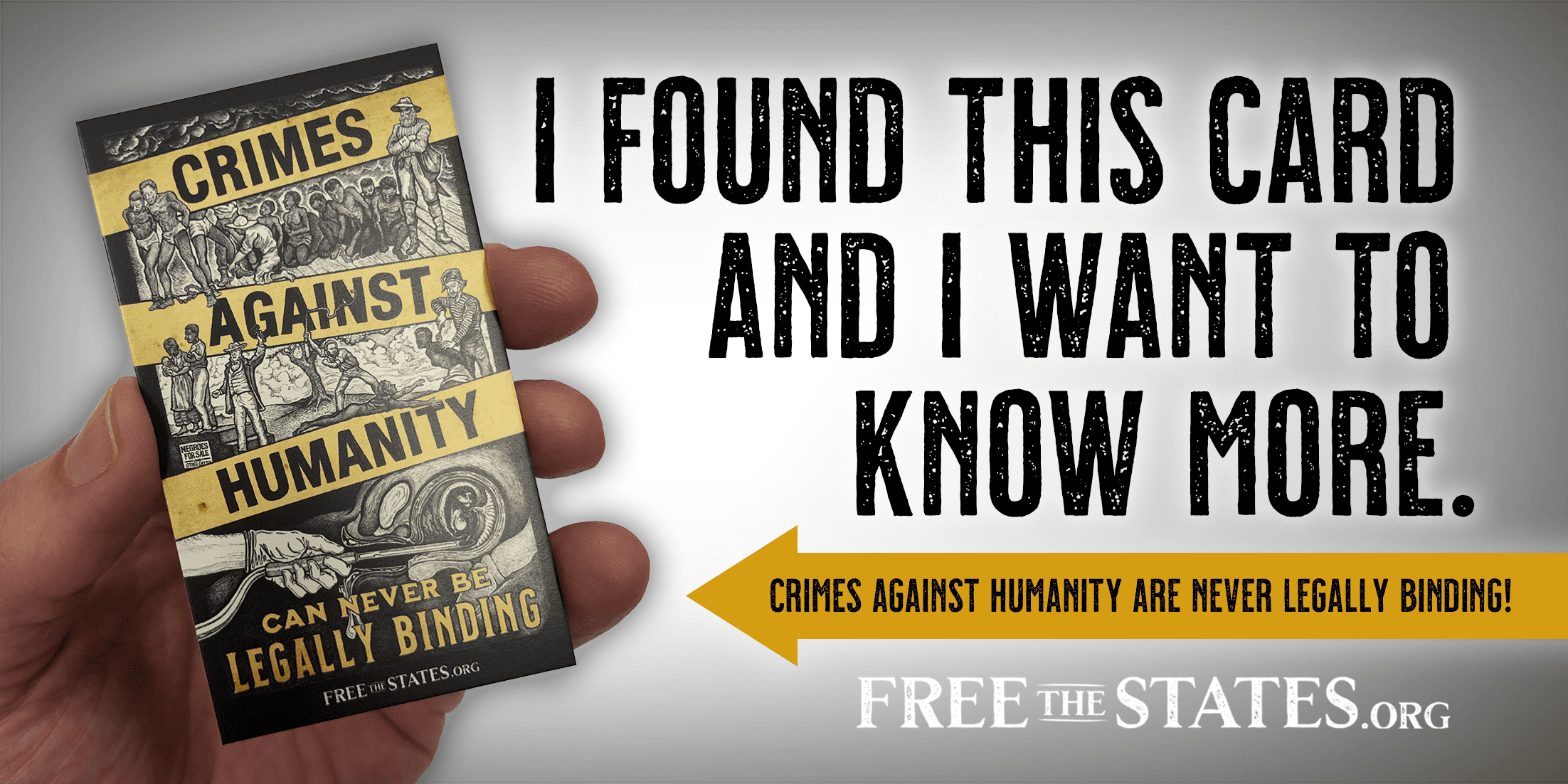 When Nazi war criminals went before an international court in Nuremberg, the primary legal defenses were versions of “befehl ist befehl” – “an order is an order” or “I was just following orders.” This plea is now known as the “Nuremberg Defense.”

The defense was not well-received by the court. Many were executed and rightly so because there is a law higher than man’s law. The Declaration of Independence refers to it as the law “of nature and nature’s God.” Any government order to murder the innocent is null by its nature because it is in violation of the highest law. For this reason, “I’m just following orders” or “I’m just following the law” is no legitimate defense for those who play a part in atrocities.

Studies such as Yale Professor Stanley Milgram’s famous observations have demonstrated the degrees to which humans are willing to harm others when they are given orders to do so. Another such study done by researchers at University College London and Université Libre de Bruxelles in Belgium found that actions taken under coercion decreases one’s “sense of agency.” The report further explained that “people who obey orders may subjectively experience their actions as closer to passive movements than fully voluntary actions.” In other words, test subjects who obeyed orders to inflict harm on others did not properly associate their actions with the harmful outcome. They viewed themselves as a cog in a machine rather than a moral agent. In their minds, they are partially or entirely disconnected from the moral value of their actions.

When abolitionists of abortion ask pro-life politicians at the state level to support a bill to abolish abortion immediately, the response is almost always some version of “befehl ist befehl.” “Abortion is murder, but we have to follow the supreme court’s orders,” they say. Pro-life politicians and lobbyists think this is a legitimate defense for their choosing not to pass and enforce a law treating preborn humans the same as born humans. Abolitionists do not believe this is a legitimate reason not to abolish abortion just as it wasn’t a legitimate defense for mid-level Nazis following their orders.

A pro-life lawyer I spoke to recently explained this position by saying “The logic of [comparing submission to Roe to submission to Nazi orders] is faulty, since Roe does not ‘order’ abortions to be carried out (like China’s’ ‘one-child’ policy) but provides for their legal availability to women as a matter of right.” In the minds of many pro-lifers, it’s morally acceptable to submit to Roe rather than nullify it because Roe is not an order to mass murder, but merely an order to allow mass murder.

Using that distinction, the pro-life politician, lawyer, or lobbyist disconnects his or her actions from the outcome of millions of murdered children. Their conscience is assuaged as they tell themselves, “At least I’m not the one murdering these children. I’m merely allowing their murder – because befehl ist befehl.”

Pro-life legislators and executives in states where pro-lifers control the state government are allowing crimes against humanity to take place in their states. This genocide is enabled by the pro-life leaders. Roe is an order to allow mass murder. It is a crime against humanity and is therefore null by its nature.

In the Kentucky Resolutions, Thomas Jefferson wrote that “every state has a natural right to nullify,” and that when the federal government behaves tyrannically, “nullification… is the rightful remedy.” To be a nullificationist is the only alternative to embracing the philosophy of the Nazi who claims “befehl ist befehl.” To reject nullificationism is to say that our governing authorities can inflict any amount of evil upon us or our neighbors and we have no ability to stand against it without the consent of the same governing authorities.

This is why it is a human right, and sometimes a human obligation, to nullify when a governing authority commands that which is evil, and especially if that command rises to the level of being a crime against humanity. Roe v. Wade is a crime against humanity that ushered in one of the greatest mass murders the world has ever seen with 63+ million dead and counting. It’s time that state governments stop “obeying orders” like good Nazis and treat Roe as the crime against humanity and legal nullity that it is.

Why is Roe v. Wade wrong? Why is abortion wrong? Why do we have a duty to stand stand for justice? Because there is an objective standard of right and wrong. Some may profess not to believe in right and wrong, but we all know it exists. You can’t live not being certain of the objective evil of murder and rape. That’s because you’re created in the image of God.

Atheist philosopher Richard Dawkins can profess to believe that “The universe we observe has … no design, no purpose, no evil and no good, nothing but blind, pitiless indifference. … DNA neither knows nor cares. DNA just is. And we dance to its music.” But he can’t live that way. He expresses moral indignation at all sorts of things, as if there is an objective standard of morality that is being broken. Ironically, he expresses indignation at God Himself, calling religion “the root of all evil.” But what is evil in a universe of blind, pitiless indifference? How can evolved stardust commit evil? The simple act of calling something “good” or “evil” is to borrow from the Christian worldview. Atheism cannot justify these concepts.

Everyone knows there is an objective standard of right and wrong, and further, everyone knows who has revealed to us this standard. Romans 1 tells us that “the wrath of God is revealed from heaven against all ungodliness and unrighteousness of men, who by their unrighteousness suppress the truth. For what can be known about God is plain to them, because God has shown it to them. For his invisible attributes, namely, his eternal power and divine nature, have been clearly perceived, ever since the creation of the world, in the things that have been made. So they are without excuse. For although they knew God, they did not honor him as God or give thanks to him, but they became futile in their thinking, and their foolish hearts were darkened. Claiming to be wise, they became fools.”

Although the truth about God is plain to us, we suppress that truth because we love our sin and don’t want to submit to God’s authority. But for this sin and every other, there is forgiveness. All have fallen short of God’s standard (Romans 3:23). Every one of us has sinned and deserves the punishment for our sin. but as Romans 5:8 tells us, you can be made righteous before God, because, despite your sin, “God shows his love for us in that while we were still sinners, Christ died for us.” Salvation is found in the grace of God alone through faith in Christ alone (Ephesians 2:8-10). He died the death that we all deserve, so that we, by faith in Him, could receive his righteousness.

If you have not given your life to Christ, do not let another day go by! Repent of your sins, put your faith in Christ, and dedicate your life the one who gave up His life that we might be reconciled to Him. Send us a message if you have any questions.