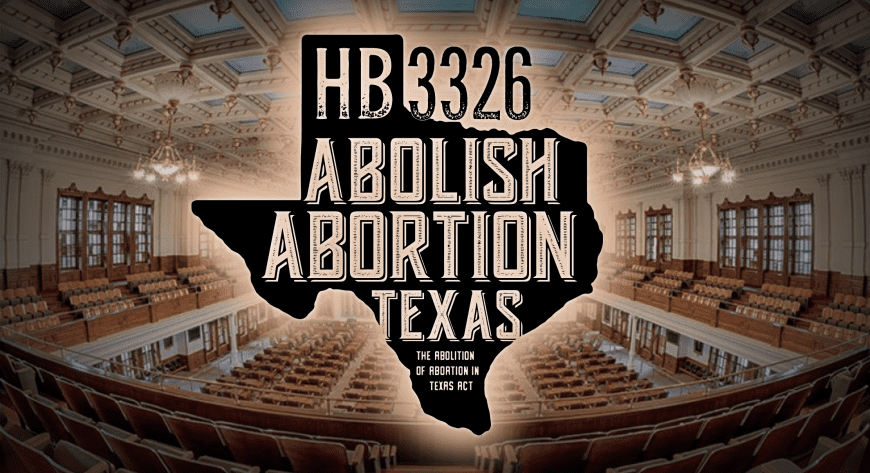 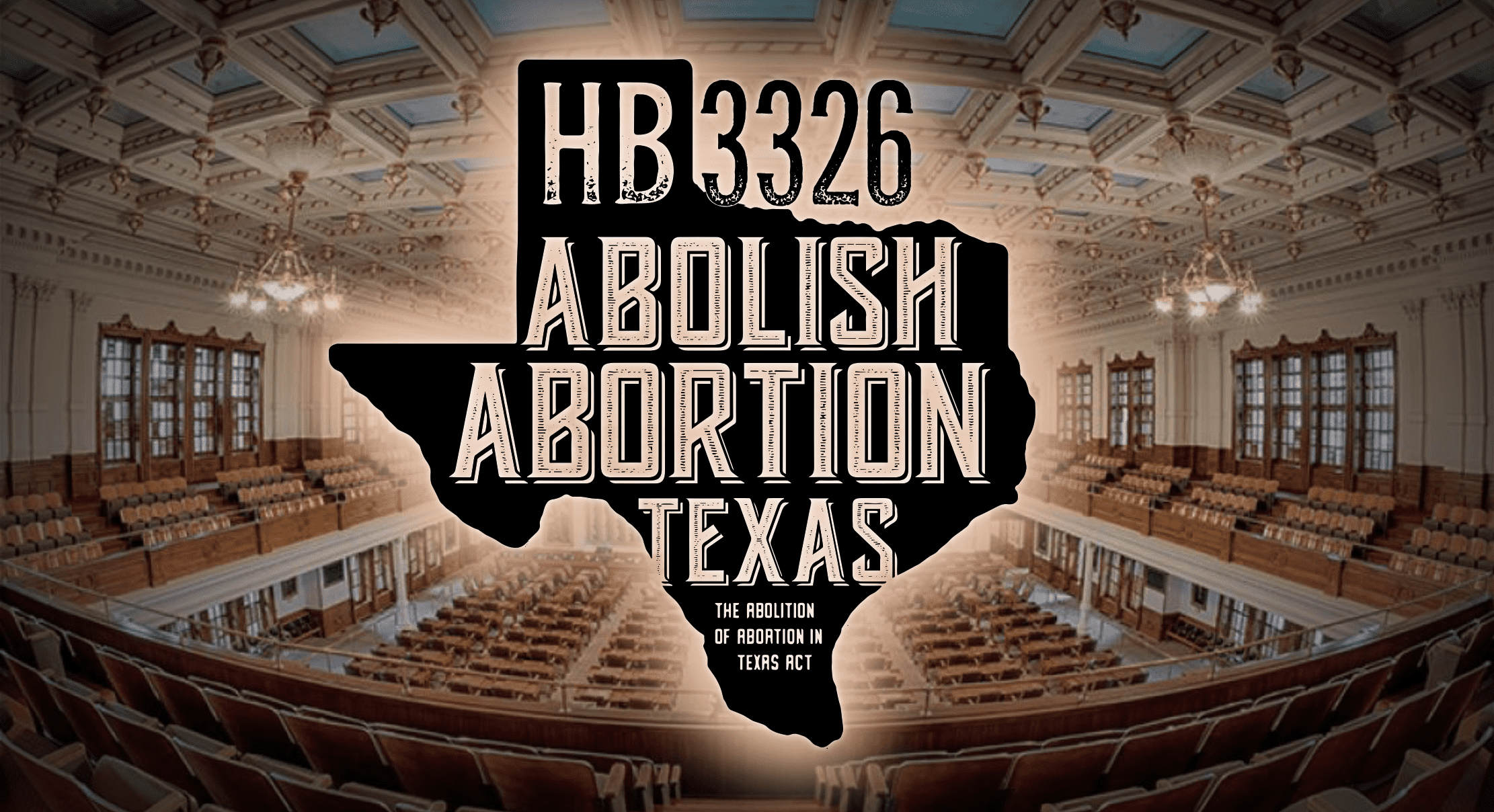 On Tuesday, Texas State Representative Bryan Slaton officially introduced the Abolition of Abortion through Equal Protection for All Unborn Children Act (HB3326). It would totally and immediately abolish abortion in the state in defiance of Roe v. Wade and Planned Parenthood v. Casey. The bill now awaits a committee assignment.

(1)  to ensure the right to life and equal protection of the laws to all unborn children from the moment of fertilization;

(2)  to establish that a living human unborn child, from the moment of fertilization and at every stage of development, is entitled to the same rights, powers, and privileges as are secured or granted by the laws of this state to any other human person;

(3)  to rescind all licenses to kill unborn children by repealing discriminatory provisions;

(4)  to equally apply the law to all persons, including legal defenses, immunities, and justifications, such as duress, necessity, and mistake of fact;

(6)  as legislators, to fulfill our oaths of office to the United States Constitution, so help us God, by disavowing the legal fiction that the constitution prohibits this state from exercising its reserved police powers to prohibit and criminalize homicide and from exercising its constitutional and God-given duties to provide equal protection to all persons within its jurisdiction;

(8)  to therefore treat as void and of no effect any and all federal statutes, regulations, treaties, orders, and court rulings that would deprive an unborn child of the right to life or prohibit the equal protection of that right.

This is the third consecutive session a bill to abolish abortion has been filed. Previous versions of the bill had as many as 11 coauthors including Reps. Tony Tinderholt, Mike Lang, Valoree Swanson, Kyle Biedermann, Briscoe Cain, Mayes Middleton, Steve Toth, James White, Cody Harris, Terry Wilson, and Phil King. Look for various Representatives to add their name to the bill in the coming week.

As we reported last July, Texas abolitionists successfully made it one of eight official legislative priorities of the Republican Party of Texas to “Abolish abortion by ensuring the right to life and equal protection of the laws to all preborn children from the moment of fertilization.” HB3326 is the only bill which would accomplish this objective.

HB 3326 would abolish abortion in Texas

HB 3326 would abolish abortion in the state of Texas by providing equal protection to all unborn Texans beginning at fertilization.

“As the Declaration of Independence makes clear, governments are instituted primarily to secure God-given rights, the principal among them being the right to life. The right to life is the first among all natural rights, and must be protected to the utmost. Any law, rule, or court decision that is opposed to this self-evident truth is not only unconstitutional but contrary to natural law and must be rejected.”

More than 55,000 babies are murdered by abortion in our state every year, makingabortion a leading cause of death in our state. Thousands of innocent lives are ended unjustly every year without being provided the legal protection enjoyed by every born person in Texas.

Breaking down the bill: Current Texas law already defines a person to include, “an unborn child at every stage of gestation from fertilization until birth.” Penal Code (PC) § 1.07(a)(26) and (38).

PC § 19.02 makes it murder to intentionally kill an unborn child. However, PC § 19.06 creates an exception for abortion.

PC § 19.06 exists because Texas has surrendered to an unconstitutional federal court ruling that is not binding on this state. HB 3326 simply repeals the exception for abortion in PC § 19.06, giving unborn persons in Texas the same legal protection as any born person.

Roe v. Wade and its judicial progeny are unconstitutional, inmoral court decisions where the court claims that there is a right to abortion contained within the Constitution despite no such evidence.

Furthermore the 14th Amendment of the U.S. Constitution provides, “No state shall… deny to any person within its jurisdiction the equal protection of the laws.”

This is the only bill currently filed in the 87th legislature which meets the “Abolition of Abortion” mandate of the 2020 Republican Party of Texas Legislative Priority.

“Abolish abortion by ensuring the right to life and equal protection of the laws to all preborn children from the moment of fertilization.”

HB 3326 creates an opportunity for a promise to be fulfilled

In 2018, Governor Greg Abbott made a promise to teenager Jeremiah Thomas before he died of cancer, to work to outlaw abortion in Texas.

“..its what we are going to be pursuing this next legislative session [2019] and that is to outlaw abortion altogether in the state of Texas.” – Governor Greg Abbott to Jeremiah Thomas,June 17th, 2018

This launched the Jeremiah’s Wish campaign. This bill provides another opportunity for Governor Abbott to fulfill his promise, and we call on him to publicly support it.

HB 3326 challenges the Senate to join the cause

Last week, Lt. Gov. Dan Patrick announced his top 31 priorities for the 87th legislative session including 2 priorities related to abortion.  The Lt. Governor can further demonstrate his commitment to ending abortion in Texas by publicly supporting this bill. We also urge life-loving senators to file a companion bill in the Senate to speed the passage of this important priority.

Please visit our website for more information on HB 3326 – The Abolition of Abortion in Texas through Equal Protection for All Unborn Children Act.

For updates about coauthors, hearings, rallies, etc. about the Abolition of Abortion in Texas through Equal Protection for All Unborn Children Act, make sure to follow Free the States and Abolish Abortion Texas on Facebook.

With social media censorship on the rise, you should also subscribe to our email lists, which you can do here and here.