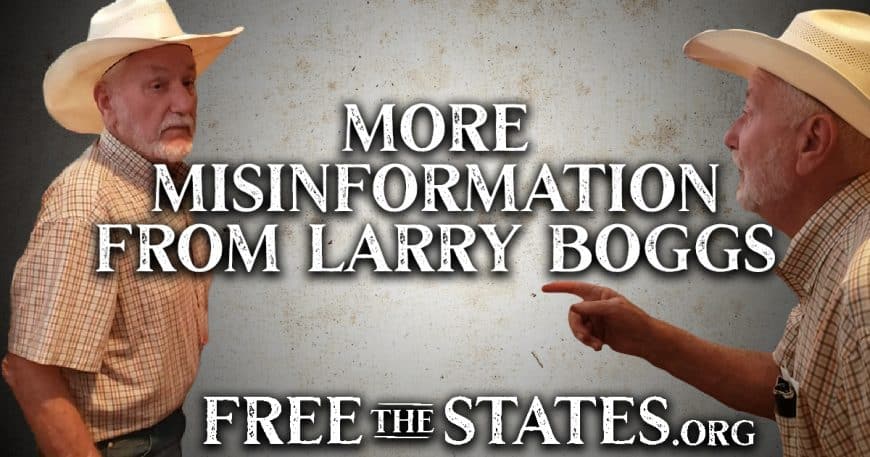 At Tuesday’s Haskell County GOP meeting, Senator Larry Boggs shoved his opponent Warren Hamilton and made threats against Daniel Navejas of The Ekklesia of Oklahoma. Footage of the incident can be viewed below. (To watch more of the lead up to the incident click here.)

During yesterday's Haskell County GOP meeting, Senator Larry Boggs lost his temper after being called out for his stance on abortion and his refusal to support Senate Bill 13. He became violent by shoving his opponent Warren Hamilton and threatened Daniel Navejas of the Ekklesia of Oklahoma.This man likely has a guilty conscience for his role in keeping abortion legal in Oklahoma. On August 25th, Senate District 7 voters will have an opportunity to unseat Boggs and replace him with Abolitionist Warren Hamilton. Throughout this exchange, Hamilton tried to defuse the situation and advised Boggs' campaign manager to take him out of the room because Boggs wasn't able to constrain himself.For the full video, see here: https://www.youtube.com/watch?v=na73E0wtZlE

In a statement he gave to the McAlester News Capital, Senator Boggs defended himself by claiming, “I said let’s go outside and talk without disturbing this meeting… Where I come from, offering to ‘take it outside’ is an invitation to stand down. My opponent just recently moved here from Texas, so maybe these kinds of sleazy attacks work in Austin, but Oklahomans stand up for themselves.”

This is a weak defense for multiple reasons. Perhaps it can be conceded that where Senator Boggs comes from, saying “step outside” means, “Let’s have a civil dialogue in the cool, fresh air,” but can it be reasonably taken to mean that in the context of shoving two grown men out of your way, one of whom is your campaign manager and the other your political rival? Perhaps for Senator Boggs, “square right up” means a peaceful discussion over a game of chess. Perhaps Senator Boggs’ aggressive body language and shouting can be taken to mean he has a violent passion for civil debate. Perhaps “Screw you!” is just a nice way of saying, “May you kindly be drilled into the ground by the force of my moral and logical reasoning abilities.” Perhaps it is not conventional for Boggs to say “screw you” one sentence after retorting that the person challenging him should repent, but in Boggs’ neck of the woods, it is normal, healthy, and loving to do so.

Boggs also told the Capital that, “All I said was ‘let’s go outside and talk.’ There was so much noise in there.” This is patently false. At no point was any indication given by Boggs that he wanted to talk outside. His exact words were, “step outside and you square right up.” The voters of Senate District 7 can decide whether this language invites civil dialogue or whether it sounds like an invitation to brawl.

When it looks like a duck, swims like a duck, quacks like a duck, it is probably just a rabbit desiring to engage in civil dialogue. Boggs appears to believe that the people of Oklahoma are stupid if he thinks they would believe this ridiculous defense of his actions given the video footage of the confrontation. “Step outside” and “square right up” are not location-specific phrases that connote civility and dialogue and nothing more. They are nasty threats probably stemming from wounded pride. There is nothing here about going outside to talk. Boggs may be remembering the incident incorrectly, but given all the rest of what he said, it can be reasonably deduced that he is just making an excuse to cover up what transpired. This statement was also given a couple hours after the incident, so it seems extremely unlikely that he forgot what he said.

Boggs may claim to have his own diction with distinct if not secret meanings that the rest of the world wrongly understands as threats, but he claims the same Word of God that all Christians ought to hold to. That word says, “Better is open rebuke than hidden love (Proverbs 27:5),” “A fool despises his father’s instruction, but whoever heeds reproof is prudent (Proverbs 15:5),” and “A rebuke goes deeper into one who has understanding than a hundred blows into a fool (Proverbs 17:10).” Instead of seriously checking himself when a pastor told him to repent, he got defensive and went on a tirade. It looks far more like a guilty conscience than righteous anger, and the “screw you” confirms the insincerity of Boggs’ call for Daniel to repent.

In a statement released today by the Boggs campaign and a quote attributed to Boggs himself, he claims a “violent mob” of “thugs” surrounded him to call him “baby killer” and other “vile insults” like the people who said the same thing to him after returning from Vietnam. Incredibly, Boggs shared a video demonstrating the exact opposite! No one in the video called him a baby killer, used any vile insults, or was violent. In fact, Boggs’ campaign manager is seen physically restraining Senator Boggs and Boggs is the only person using vile language. Further, Boggs can clearly be seen in the footage as the one who approaches those he accuses of being the violent mob who surrounded him and Boggs breaks through the crowd (and by “the crowd” we mean his own campaign manager who was restraining him) to yell at Navejas and scream his threats. No mob surrounded him. He approached individuals at the conclusion of the event and threatened them while using vile language and somehow is said to have righteously fought them off.

He compared supporters of Hamilton to violent leftists and called them thugs while he was the one threatening violence in a stunning display of hypocrisy. He claimed that Hamilton released the footage as an attack on him when in reality the Hamilton campaign hasn’t released any statement or video about the incident as of this writing. He claimed that people called him names and invaded personal space while he was the one saying “screw you,” approaching others and sticking his finger in a man’s face. He claims that the video of him shoving Hamilton and making threats is doctored while his own video demonstrates the truth of the claims being made about him. He further claims that he “lashed back” to “restore order” when there is no evidence of this because he was the only one exhibiting behavior that could be legally classified as disorderly conduct. The lies go on and on. It is an incredible attempt at a cover-up by the Boggs campaign while simultaneously releasing further evidence that damns his case. Nearly everything claimed by the Boggs campaign is a now twice-documented lie, and any honest person who watches either video of their choosing will see that.

In a display of Christian charity and honorable conduct, Hamilton is heard showing concern for Boggs. As things were getting out of hand, Hamilton said to Boggs’ campaign manager, “Hey man, we probably disagree wholeheartedly on just about everything. But a sitting senator getting western is not gonna look good for anybody, all right? You take care of him and you follow him around. You got a responsibility. You take care of him, okay?” Hamilton was nothing but gracious to Boggs and Boggs offered in return a sleazy, low-down and dirty attack against him for political gain.

Several of Senator Boggs’ supporters took to Facebook to mount a defense for their candidate of choice. It was said by some that Boggs was “provoked” into acting this way, and his campaign manager Conner Alford can be heard in the video saying, “Senator, they’re trying to make you do this.” This is not the case. Abolitionists regularly call out pro-life politicians for refusing to abolish abortion. Abolitionism is all about repentance and so it’s not unusual to use that type of language. We don’t say these things to try to get a rise out of people. We say them because they need to be said. Those who hold positions in the government of Oklahoma need to repent of sanctioning the murder of preborn children and the people of Oklahoma need to repent of our apathy in not demanding more vehemently that our government provide equal protection to preborn children.

A Christian telling another Christian to repent should not be provocative. To the wise, rebuke is welcome. It gives a person an opportunity to evaluate themselves and realign their thinking and actions to the mind of Christ. Even when a rebuke is unwarranted or incorrect, a person should take it seriously and not respond with anger, but instead seek to show why the rebuke lacks credibility. Boggs didn’t do that. He lashed out and made excuses. If telling someone to repent is provoking them, Jesus provoked the Pharisees who killed him.

The State of Oklahoma is guilty of allowing the murder of 5,000 image bearers of God annually. We need to repent. Repentance means putting aside pride, but that’s the Christian obligation. As Muskogee pastor Brett Baggett said, “Repentance isn’t something to be ashamed of. It should be a regular habit of the christian life.” No one came to that meeting hoping to provoke Senator Boggs into a violent outburst. We came to push back against the falsehoods being spread about SB13 and to once again demand our State legislators establish justice for preborn children.

The Opportunity Before SD7 Voters

Boggs’ behavior in this video is not the main reason to oppose Boggs’ reelection. The main reason he should be opposed is because his refusal to support The Abolition of Abortion in Oklahoma Act helped seal the fate of 5,000 more Oklahoma babies who he is supposed to represent. Further, to cover his refusal to support abolition, Boggs has been actively spreading a debunked lie that Senator Silk did not properly submit amendments to the bill. Boggs should be opposed because another 5,000 babies will be murdered in 2021 if pro-life politicians like Boggs get their way. For the Republican pro-life establishment, the end of abortion is a carrot on a string and Oklahoma voters are the horse. The horse never gets the carrot.

Senate District 7 voters have an opportunity to score a massive victory in the fight for preborn children. We will give everything we have to fight for abolition next legislative session no matter who sits in the Senate, but the chances of establishing justice for preborn children next year increase drastically if Boggs is replaced by Warren Hamilton. In the August 25th run-off, SD7 voters have an opportunity to replace someone who does not intend to abolish abortion soon with a righteous man who will strive to see abortion ended immediately. The stakes are high. Citizens of McAlester, Stigler, Wilburton, and the surrounding areas: let justice roll down like waters, and righteousness like an ever-flowing stream. Your preborn neighbor needs you. This is one of the most important votes you will ever cast. For too long we have stood idly by while tyrants determine who lives and who dies. God knows what we have allowed, and His patience is meant to lead us to repentance. Do not throw off justice and let the establishment continue to allow the slaughter. Stand with a man who will challenge the status quo and end the genocide that pollutes our land.