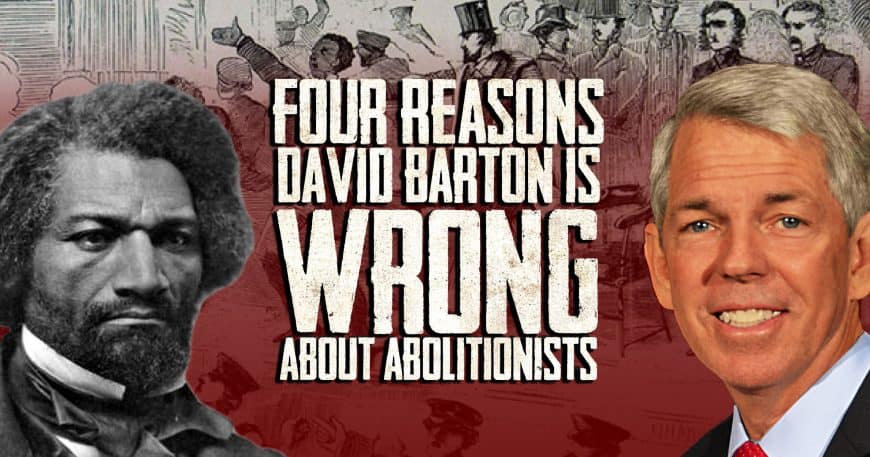 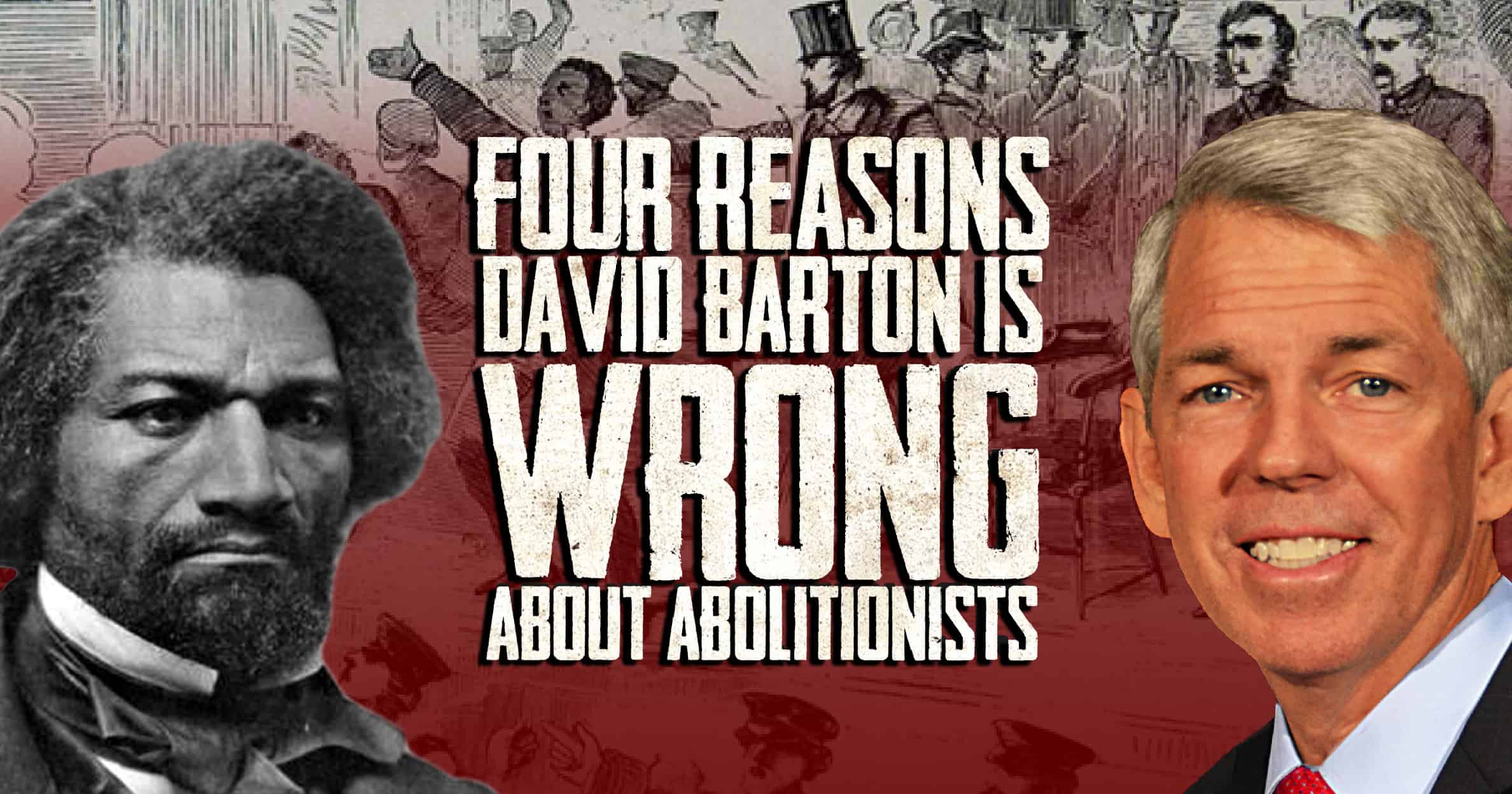 In a video uploaded to Facebook last Tuesday, author and activist David Barton argued for incrementalism and against immediatism in the fight against abortion. Barton is the former Vice Chair of the Texas Republican Party, so the video was likely in response to Texas abolitionists who are seeking to make abortion’s immediate abolition an official legislative priority of the Texas GOP at this week’s state party convention. There are four primary problems with Barton’s video.

Barton begins his argument with passages from Exodus and Deuteronomy which explain that the promised land would be given to the Israelites over time and not all at once. His implication is that immediatists who want abortion abolished overnight are not operating according to the principles established by God in these passages.

Barton’s argument is predicated on a common misunderstanding of immediatism. Immediatism is not overnight-ism. Immediatists are not under the impression that the culture will drastically change overnight or that the object of their protest will be abolished overnight. We understand, as our 19th century abolitionist predecessors did, that the fight to abolish a great societal evil is a struggle that will likely take years. As William Lloyd Garrison wrote in the August 13, 1831 edition of The Liberator, “Urge immediate abolition as earnestly as we may, it will alas! be gradual abolition in the end. We have never said that slavery would be overthrown by a single blow; that it ought to be we shall always contend.” The immediatism-incrementalism debate does not revolve around how long the battle takes (though the immediatist strategy will certainly achieve the desired end more quickly). The debate revolves around what our demand should be.

For instance, the immediatist demand for abortion to be abolished can be grounded in God’s word (You shall not murder) and in the US Constitution (“[No state shall] deny to any person within its jurisdiction the equal protection of the laws.”) An incrementalist’s demand for a 20-week abortion ban or a heartbeat bill cannot be defended from God’s word or the Constitution, as these laws – by implying the legality of abortion prior to the arbitrary standard they set for who counts as fully human – violate both.

Because incremental laws and the incremental arguments made in favor of them cannot be grounded in anything substantial, they are weak and impotent to change culture. In some cases, these bills and arguments actually serve to change culture in the wrong direction by dehumanizing the preborn children left unprotected or classified as non-humans by the arbitrary law (see point #3 of this article). Compromise bills and arguments mean compromised foundations, compromised foundations mean no powerful prophetic witness from our demands, and no powerful prophetic witness from our demands means no positive cultural change from our demands. This is one of the many reasons immediatists demand the immediate, and not the gradual, abolition of the evil.

This is what the immediatism-incrementalism debate is about. Barton’s citation of Exodus and Deuteronomy to argue that cultural change takes time has nothing to do with it.

Barton’s next argument is that a football team is successful when they put together small gains rather than throwing it deep every play. “[Football teams] don’t try to score a touchdown every time they touch the ball. What they try to do is put together a series of small gains that they build into first down that they eventually turn into a touchdown. Any team that tries to score a bomb every time it touches the ball is almost certainly guaranteed defeat.”

The hundreds of incremental bills passed in state legislatures do not amount to first downs. They amount to sacks and interceptions. Incrementalists often point to the decreasing abortion rates across the country, but that can’t be attributed to incremental laws as the abortion rate is declining at similar rates in both pro-life and pro-choice states. Here in Oklahoma, the number of abortions has actually increased in recent years despite the pro-life laws we pass every session.

Further, the supposed decrease in abortion rates does not account for the rise in self-induced abortions  and some other forms of early chemical abortions which go unreported. What incremental bills have accomplished is weakened the principles with which we must rebuke abortion. They have, in some cases, dehumanized preborn children. They have provided a never-ending stream of “pro-life victories” which accomplishes nothing to abolish abortion while giving Christians the false impression that we’re winning and thus lulling them to complacency. This concept was articulated well by British slavery abolitionist Elizabeth Heyrick in her 1824 pamphlet Immediate, Not Gradual Abolition.

“[T]his GRADUAL ABOLITION, has been the grand marplot of human virtue and happiness; the very masterpiece of satanic policy. By converting the cry for immediate, into gradual emancipation, the prince of slave holders, ‘transformed himself, with astonishing dexterity, into an angel of light,’ and thereby ‘deceived the very elect.’ He saw very clearly, that if public justice and humanity, especially, if Christian justice and humanity, could be brought to demand only a gradual extermination of the enormities of the slave system; if they could be brought to acquiesce, but for one year, or for one month, in the slavery of our African brother, in robbing him of all the rights of humanity, and degrading him to a level with the brutes; that then, they could imperceptibly be brought to acquiesce in all this for an unlimited duration….”

Barton then claims that John Quincy Adams introduced a bill in 1843 that would have abolished slavery over a seven year period. (Barton says “1743” in the video, but must have meant “1843” as that’s when Adams was in Congress and the debate over slavery was raging.) Barton continues by claiming that Adams’ plan “was not passed because abolitionists said, ‘No, no, no. We don’t want another seven more years of slavery. We don’t want to end it in seven years, we want to end it now.’ And because they wouldn’t take incremental steps, we had another 22 years of slavery and 600,000 lives lost in the Civil War, and so incrementalism is the way that God said we should use, as a plan that He had. It would’ve worked. We look back now and say ‘Man, we should’ve done that. It would’ve been so much better.’ But the demand for instant victories is what led to an ultimate defeat in that area.”

When Barton accuses the immediatists of delaying slavery’s abolition by 22 years and causing 600,000 deaths, it’s not a small few being criticized. Nearly all of the influential American abolitionists we read about – Garrison, Frederick Douglass, Harriet Tubman, David Walker, Sojourner Truth, Josiah Wedgewood, Elijah Lovejoy, Anthony Benezet, Arthur Tappan, Lewis Tappan, Wendell Phillips, etc. – were immediatists. It’s important to be clear that these are the men and women Barton is accusing of delaying abolition.

After researching the matter, Barton’s claim appears to be completely ahistorical. There does not appear to be any evidence that a bill to abolish slavery in the United States over seven years was introduced in 1843, and even if there was, the immediatist/Garrisonian abolitionists did not make significant inroads into Congress until years later in the 1850s and thus would not have had the ability to prevent an 1843 bill from passing even if it did exist.

Further still, the president in 1843 was John Tyler. Though he was a Whig (the nominally anti-slavery party) prior to being expelled from the party over banking and tariff disputes, Tyler was a slave owner, a white supremacist, and a blasphemer who used God to try to justify his own depravity. In 1838, Tyler blasphemously accused God of being the one who orchestrated chattel slavery: “[God] works most inscrutably to the understandings of men; – the negro is torn from Africa, a barbarian,  ignorant and idolatrous; he is restored civilized, enlightened, and a Christian.” Tyler called the abolitionist pamphlets and tracts which were being disseminated “evil” and “seditious and incendiary publications.” Tyler said that pastors who preached abolition in the pulpit “deserve the scorn and contempt of mankind.” In a letter to his son Robert, Tyler explained his view that the abolitionists “deserve the deepest curses of the patriot.” After his time as President, Tyler was a member of the Confederate House of Representatives until his death. Needless to say, it is extraordinarily unlikely that Tyler ever would have signed a bill to abolish slavery over seven years even if the bill existed, making Barton’s claim that the supposed bill “was not passed because [of] abolitionists” even more implausible.

To recap, there does not appear to be any evidence that a bill to abolish slavery in seven years was introduced in Congress in 1843. Even if it were introduced, Barton’s claim that immediatists prevented its passage would appear to be false as there wasn’t an immediatist contingent in Congress until years later. And even if there were a bill to abolish slavery over seven years in 1843, and there were immediatists in Congress who prevented its passage, President Tyler would almost certainly never have signed such a bill. I will assume the best of Barton by concluding that he simply has gotten his facts wrong. If he or anyone else can provide substantiation for his claims, I will be happy to correct this section, but I doubt there will be cause to do so.

4) Incrementalists Are the Ones Preventing Varying Strategies

Barton then goes to Ecclesiastes 11 which speaks of diversifying investments to argue that we should use a variety of political strategies against abortion. There are two problems with this.

First, incremental bills are the excuse pro-life politicians use to not abolish abortion. As has been covered extensively on the Free the States blog, we have a bill to abolish abortion in Oklahoma, and the politicians opposing the Abolition of Abortion in Oklahoma Act are many of the same ones campaigning as pro-life heroes by pointing to their incremental victories. It’s the incremental bills that these politicians use as a substitute for abolition that ultimately allows the politicians keeping abortion legal to get reelected in arguably the most pro-life state in the union. It’s for this reason that William Lloyd Garrison wrote, “We regard, as delusive, cruel and dangerous, any scheme of expatriation which pretends to aid, either directly or indirectly, in the emancipation of the slaves, or to be a substitute for the immediate and total abolition of slavery.”

The second problem with Barton’s argument is that it’s incrementalist pro-life politicians and organizations who are preventing this plurality of strategies he advocates from taking place. They are the ones ensuring that incrementalism is the only strategy that gets a hearing in the state legislature. The Abolition of Abortion in Oklahoma Act was first filed in 2016 and, every year, pro-life committee chairs have denied it even a committee hearing, at the behest of Oklahomans for Life.

Barton’s video lacks both an understanding of the immediatist view he attempts to refute and a grasp of the historical events surrounding the abolition of slavery. Given its serious errors in these regards, the video should be taken down or corrected.

In closing, I will extend to Barton – in the instance that this article reaches him or someone who knows him – the opportunity to formally debate the matter of incrementalism and immediatism. This discussion is an important one and we would love to facilitate it. We can be reached at our contact form or at j.silberman@ymail.com.