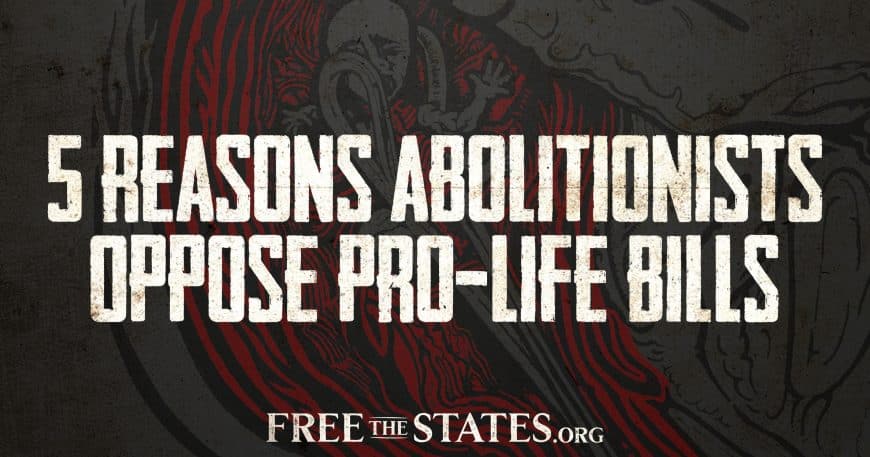 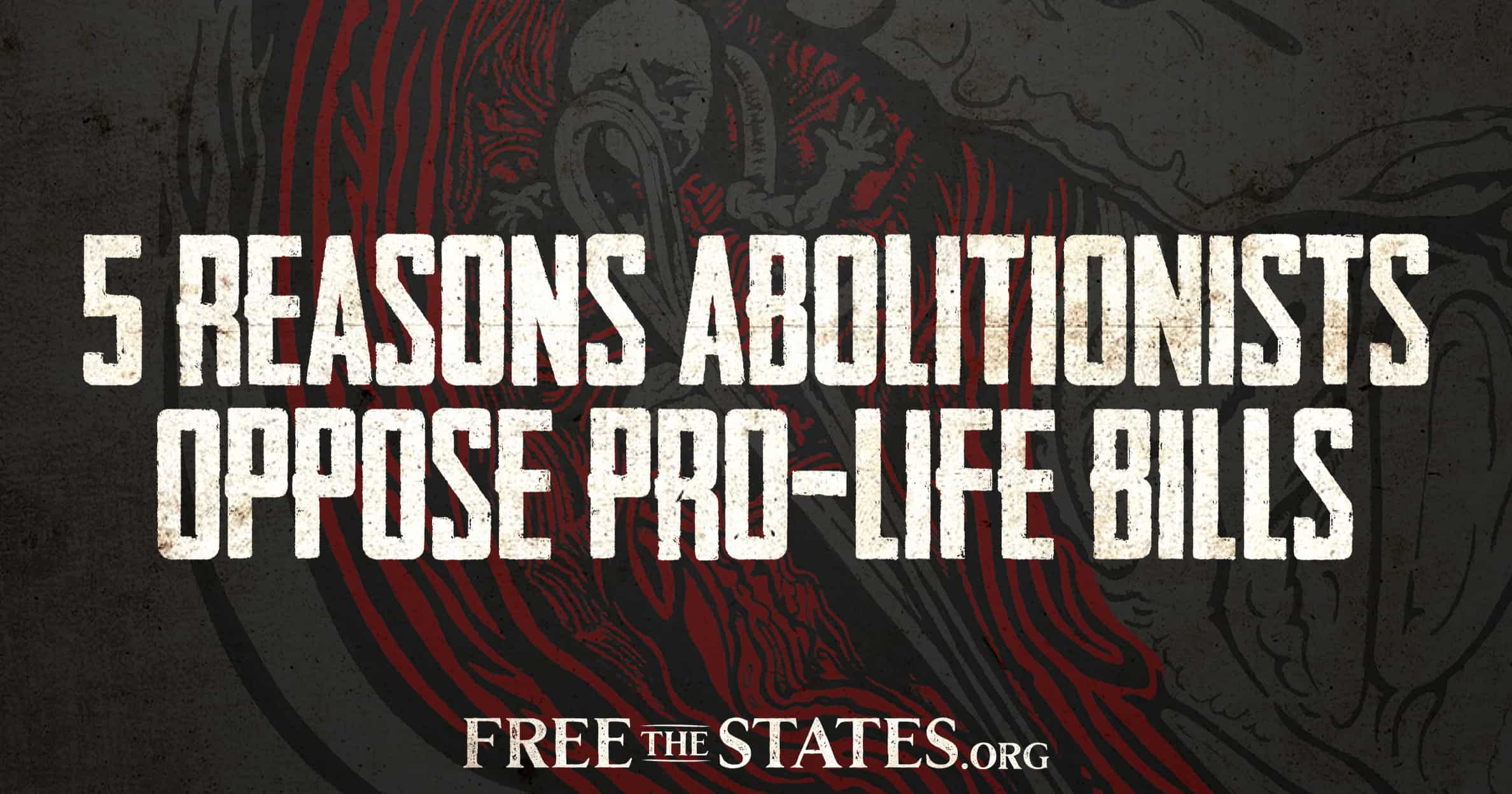 The rationale for opposing incremental pro-life bills is first and foremost that they are unbiblical. They violate God’s commands against murder. By regulating abortion, they explicitly codify into law that murder is legal under certain circumstances. As Pastor C.R. Cali puts it in his book, The Doctrine of Balaam, “Regulating abortion gives more than tacit permission; it definitionally governs, directs, and controls the killing of preborn children through rule and law. Rather than engendering an attitude of abhorrence for this slaughter, regulations legitimize the practice by dictating where, when and how it is acceptable. Any law that sanctions the unjust killing of a human is by nature unjust.”

The pro-life thinking is that these bills ban some abortions. This is true; some abortions are banned by incremental pro-life laws. But a law that establishes a ban on abortion after a certain point also establishes that abortion is allowed before that point. Isaiah 10:1-2 says, “Woe to those who decree iniquitous decrees, and the writers who keep writing oppression, to turn aside the needy from justice and to rob the poor of my people of their right, that widows may be their spoil, and that they may make the fatherless their prey!” What could be more iniquitous than a law establishing an arbitrary point at which it’s okay to murder an image-bearer of God?

The idea that it’s okay to pass a law allowing some murder as long it allows less murder than the status quo is a form of moral relativism. From this perspective, a ban on abortion at 24 weeks would be a good or just law in California (because it’s better than the California status quo) while simultaneously being a bad or unjust law in Oklahoma (because it’s worse than the Oklahoma status quo). This is not a Christian approach to ethics. This is a relativistic and decidedly anti-Christian approach to ethics.

God’s word is our ultimate foundation, but the U.S. Constitution demands abortion’s abolition as well. The 14th amendment establishes that the equal protection of the law must be afforded to all: “No state shall make or enforce any law which shall abridge the privileges or immunities of citizens of the United States; nor shall any state deprive any person of life, liberty, or property, without due process of law; nor deny to any person within its jurisdiction the equal protection of the laws.”

Incremental pro-life bills dehumanize those children who don’t meet their arbitrary requirements for legal protection, specific to each bill. When I lived in Ohio, I met with the office of State Senator Andrew Brenner, a pro-life stalwart. I explained to his aide what an abolition bill looks like and why one needs to be introduced in Ohio. When I was done, his aide said, “This was very interesting, but it’s Senator Brenner’s personal religious conviction that life begins at a heartbeat.” Where did he learn that ridiculous and evil idea that humans don’t have value until their heartbeats can be detected? He learned it from the Heartbeat Bill. Brenner was one of its primary champions.

My friend and Free the States colleague Russell Hunter discovered the same thing while pleading with an abortion-minded mother outside a Norman abortion facility in 2016. Russell was pleading with her not to go through with the abortion when she told him, “It’s okay. My baby won’t even feel any pain.” Where did she learn that it’s okay to murder your baby as long as he or she doesn’t feel pain? From the pro-life movement and the Pain-Capable Unborn Child Protection Act which highlights pain as the reason abortion should be illegal.

While doing anti-abortion outreach at a university campus in California, Sam Riley (also a friend and Free the States colleague) discovered another dehumanizing aspect of pro-life bills. A female student, intrigued by the display, approached Sam and asked whether he opposed abortion even in the case of rape. Sam explained to her that abortion is wrong for the same reason that rape is wrong – it’s a violent act of aggression against an innocent human being, and that it’s unacceptable for us to give the death penalty to a child for the sins of the father. The young woman broke down in tears. “Thank you for saying that,” she told him. “I was conceived in rape and when people talk about a rape exception for abortion, what I hear is that my life is less valuable.” Not all pro-life bills have rape exceptions, but many of them do. These bills dehumanize those conceived in rape.

This is the consequence of supporting bills that violate our foundations. People are dehumanized and the culture is miseducated.

In an 1857 speech, Fredrick Douglass said, “Power concedes nothing without a demand. It never did and it never will. Find out just what any people will quietly submit to and you have found out the exact measure of injustice and wrong which will be imposed upon them, and these will continue till they are resisted with either words or blows, or with both. The limits of tyrants are prescribed by the endurance of those whom they oppress.”

For as long as we write and support bills which submit to Roe, the court will know they are fully in the driver’s seat. They are unlikely to concede anything and they haven’t in 47 years. Despite having 37 opportunities to overturn Roe and a Republican majority supreme court almost the entire time, the supreme court has conceded not one iota. In 1992, the court was made up of eight Republican-appointed justices and a pro-life Democrat. That should have been a slam dunk, near-unanimous overturning of Roe. But the ’92 court, even with just about the most pro-life makeup imaginable, upheld Roe in the Planned Parenthood v. Casey decision. All five justices who voted to uphold Roe were Republican appointees (two Reagan appointees, and one appointee each from Bush Sr., Nixon, and Ford).

Pro-life laws demand nothing. They’re a beg for scraps. Pro-life laws are written explicitly in submission to Roe because pro-lifers don’t think they can stand up to the courts. This further entrenches the idea that the court’s authority is unassailable. Tragically, that’s what most pro-life politicians and lobbyists believe. They think our submission to the supreme court must be unconditional. Lest anyone think that’s an exaggeration, Texas Alliance for Life Director Joe Pojman told the Austin Chronicle last April that, “We could no sooner ignore SCOTUS than the force of gravity.” For Pojman and the pro-life leaders, we are subject to the supreme court and Roe v. Wade in the same way we’re subject to the laws of nature. This is anathema to the ideas and documents upon which the U.S. was founded, but more importantly, it’s another decidedly anti-Christian ethic. Our only unconditional submission is to God, and when we’re forced to choose between obedience to God or obedience to man, we obey God (Acts 5:29).

What we should do is check the power of the tyrant by ignoring their evil and unconstitutional abortion jurisprudence. Because judicial supremacy is so engrained in the culture, people often react to that suggestion as if it were a radical idea, but it’s not. The other branches and the states are supposed to be a check on the power of a branch that goes tyrannical, and the courts have clearly gone tyrannical.

There are two ways to check the power of the judiciary: nullification and impeachment. If we’re unwilling to ignore evil, unconstitutional decisions and we’re unwilling to impeach justices who defy the Constitution, then the judiciary has unlimited power. We’ve got to stop appeasing and thereby strengthening the tyrant with incremental bills that submit to Roe. We must check the tyrant’s power with an abolition bill that stands up to Roe.

5) Incremental Pro-Life Bills Are a Substitute for Abolition

At an 1833 public proclamation of the Declaration of [Abolitionist] Sentiments, William Lloyd Garrison said, “We regard as delusive, cruel and dangerous any scheme of expatriation which pretends to aid, either directly or indirectly, in the emancipation of the slaves, or to be a substitute for the immediate and total abolition of slavery” (emphasis mine).