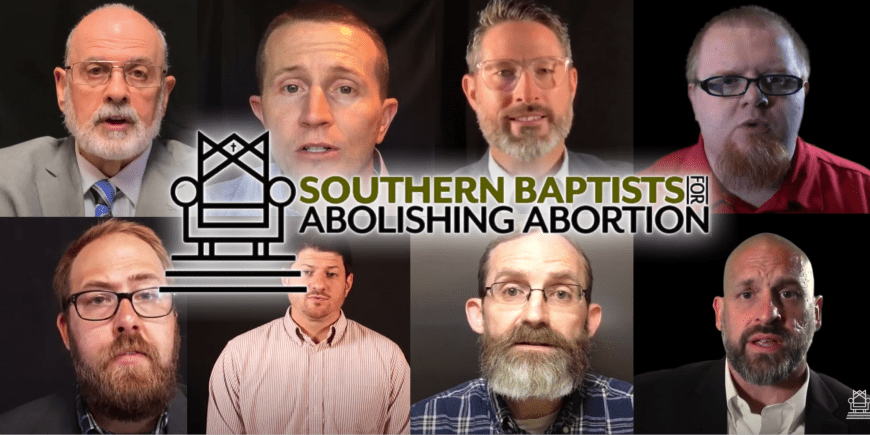 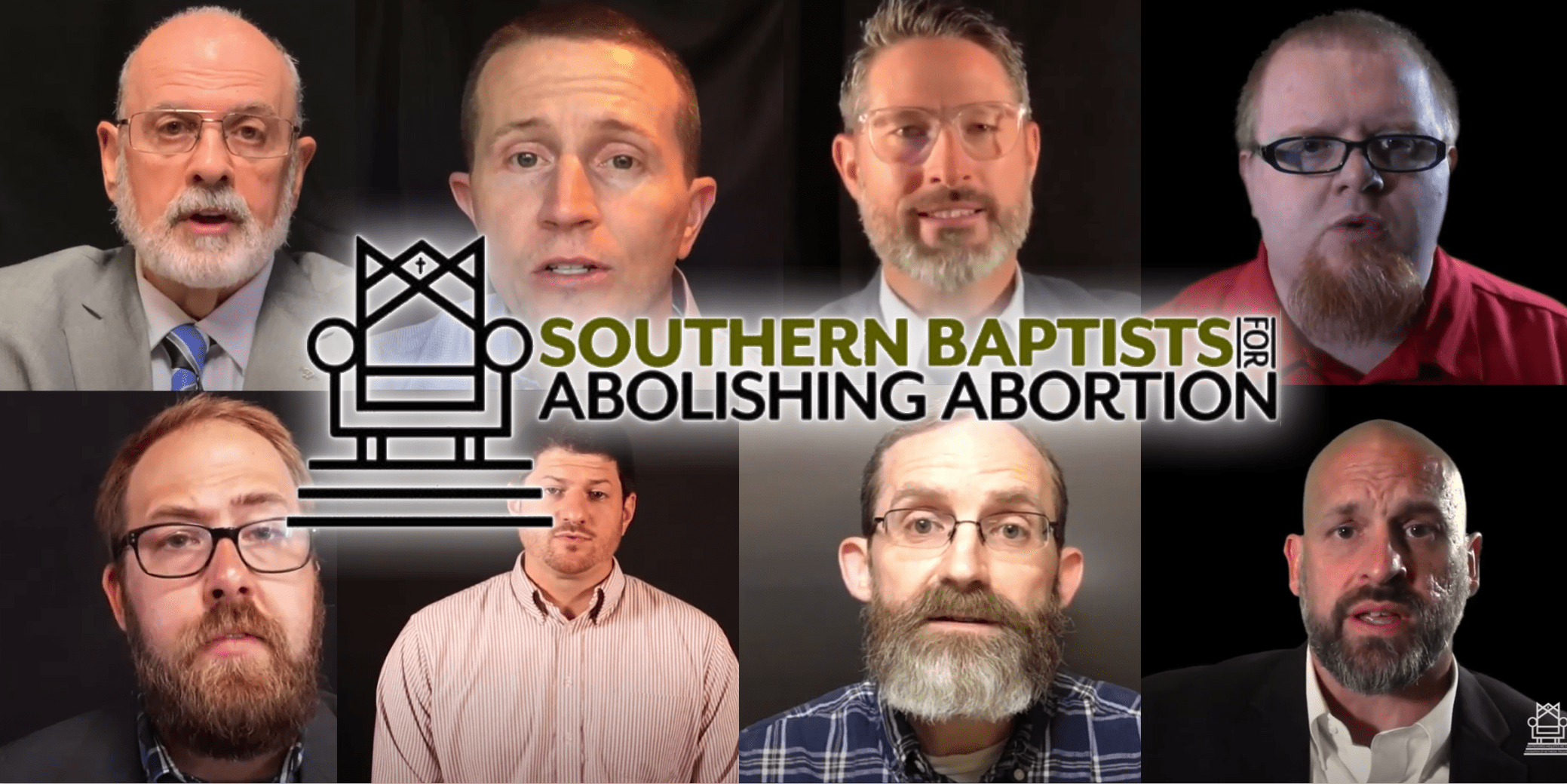 On Tuesday, a coalition of Southern Baptist pastors from across the country announced a resolution to abolish abortion in America as well the launch of an accompanying website and Facebook page. The resolution will be introduced at the 2021 Southern Baptist Convention’s annual meeting.

Due to the considerable sway the Southern Baptist Convention (SBC) has with Christians nation and worldwide, this is a big development. It comes on the heels of Oklahoma Baptists (the SBC-affiliated convention in Oklahoma) passing a resolution calling for abortion’s abolition “without exception or compromise” in Oklahoma last November.

Notably, Indiana Pastor Derin Stidd – who is featured in the video announcement of the resolution – made an abolitionist motion at the 2019 National Southern Baptist Convention annual meeting. The motion was struck down on a technicality.

The call of the Abolitionist Movement since its reignition in 2010 has been for Christians individually and the Body of Christ collectively to repent of our apathy toward the thousands of preborn image bearers who are murdered daily in the U.S. alone, and of our comfort with supporting laws regulating abortion. The Southern Baptist Resolution on Abolishing Abortion leans heavily on the idea of Christian repentance and of standing firm on God’s word rather than compromising with abortion.

The resolution also makes clear that abortion is a Biblical issue. The consequence of this is that abortion is treated as something that can’t be ignored as a mere political issue, and cannot be adequately fought by mere secular arguments and strategies. Abortion is sin, and the answer to sin is the Gospel. This stands in stark contrast to the leading politicians and organizations in the Pro-Life Movement who have fought abortion with worldly arguments and by worldly political strategies which consider compromise as the key to success.

Unfortunately, many leaders in the Pro-Life Movement show no signs of dismounting this secular, compromise-driven treadmill they have walked for the better part of the last five decades. While the leaders may not be coming around, Christians generally are waking up to the futility of pro-life regulations that either bow so low to Roe v. Wade that they save no children or is deemed by the court system to be too much of a threat to Roe and is struck down. As explained in the resolution, the Supreme Court does not have the authority to legalize child murder, either constitutionally or biblically, and it is the duty of the church and the state to defy tyrants who purport to legalize genocide.

The political strategy practiced by the leading pro-life politicians and lobbyists can be summed up in two words: “Just wait.” We are to wait until the Supreme Court changes their opinion, according to the pro-life leaders. The Southern Baptist Resolution on Abolishing Abortion is a call for the SBC to stop waiting. It’s a call for the SBC to be the prophetic voice that Christians are called to be in demanding immediate justice for preborn image bearers in a culture that sanctions their murder by the millions. Christians are not waiting anymore; law and order will not be suspended anymore; the constitution will not be ignored anymore; the voice of Christ will not go unheeded anymore.

As we’ve already seen in Oklahoma, the paradigm is shifting. The movement of Christians adhering to uncompromising Biblical abolitionism is growing rapidly. Both the Oklahoma Southern Baptists and Free Will Baptists have already passed resolutions demanding immediate abolition, and now Oklahoma SBC pastors along with pastors from various other states are taking that call for justice to the National SBC.

Watch the video and read the Southern Baptist Resolution on Abolishing Abortion below and sign the petition to support the resolution here.

(2) WHEREAS, as God’s image-bearers, all humans both display His divine worth, power, and attributes, and possess the same objective worth before God, not varying on the basis of incidental characteristics; such as ethnicity, age, size, means of conception, mental development, physical development, gender, potential, or contribution to society (Rom 1:19-20; Gen 1:28; 9:6; Matthew 18:6), and

(3) WHEREAS, all humans are created with God’s law written on their hearts, which works with their conscience to accuse or excuse them before God, and to undermine law and conscience is to ask, “Did God really say?” (Rom 2:14-16; Gen 3:1), and

(4) WHEREAS, to murder any preborn image-bearer is a sin, violating both the natural law of retributive justice as set forth in the Noahic covenant, as well as the sixth commandment forbidding murder, and as such, is ultimately an assault on God’s image, seeking to usurp God’s sovereignty as Creator (Gen 9:5-6; Exodus 20:13; Proverbs 6:17), and

(6) WHEREAS, God commands His own people to “rescue those who are being taken away to death” and holds them responsible and without excuse when they fail to do so (Prov 24:11-12), and

(7) WHEREAS, God establishes all governing authorities as His avenging servants to carry out His wrath on the evildoer; and commands these authorities to judge justly, neither showing partiality to the wicked, nor using unequal standards, which are abominations (Psa 82; Rom 13:4), and

(9) WHEREAS, in the Roe v. Wade decision, the Supreme Court of the United States subverted the U.S. Constitution namely, the Preamble, as well as the Fifth and Fourteenth Amendments without any legal authority (Article 6, Clause 2 “Supremacy Clause”), and

(10) WHEREAS, governing authorities at every level have a duty before God to uphold justice asserting their God-ordained and constitutional authority to establish equal protection under the law for all, born and preborn, by intervening, ignoring, or nullifying iniquitous decisions when other authorities condone such injustices as the legal taking of innocent life (Daniel 3; 1 Kings 12; 2 Kings 11; Jeremiah 26:10-16; 36:9-31; 37:11- 21; 39:7-10), and

(11) WHEREAS, over the past 48 years with 60+ million abortions, traditional Pro-life laws, though well intended, have not established equal protection and justice for the preborn, but on the contrary, appallingly have established incremental, regulatory guidelines for when, where, why, and how to obtain legal abortion of innocent preborn children, thereby legally sanctioning abortion, and

(12) WHEREAS, since 1980, the SBC has passed many resolutions reaffirming the importance of human life at all stages of development, our repentance is still lacking as we consistently have stopped short of calling for the immediate abolition of abortion without exception or compromise, and

(13) WHEREAS, our confessional statement, The Baptist Faith and Message, according to Article XV, affirms that children “from the moment of conception, are a blessing and heritage from the Lord”; and further affirms that Southern Baptists are mandated by Scripture to “speak on behalf of the unborn and contend for the sanctity of all human life from conception to natural death,” now, be it therefore

(14) RESOLVED, that the messengers of the SBC meeting in Nashville, Tennessee, June 15-16, 2021, do state unequivocally that abortion is murder, and we reject any position that allows for any exceptions to the legal protection of our preborn neighbors, compromises God’s holy standard of justice, or promotes any God-hating partiality (Psa 94:6; Isa 10:1-2; Prov 24:11; Psa 82:1-4), and be it further

(15) RESOLVED, that we will not embrace an incremental approach to ending abortion because it challenges God’s Lordship over the heart and the conscience, and rejects His call to repent of sin completely and immediately (Gen 3:1; John 8:44; Rom 2:14-15; 2 Corinthians 11:3), and be it further

(16) RESOLVED, that we affirm that the murder of preborn children is a crime against humanity that must be punished equally under the law, and be it further

(17) RESOLVED, that we humbly confess and repent of our complicity in recognizing any exceptions that legitimize or regulate abortion, and of our apathy, in not laboring with the power and influence we have to abolish abortion, and be it further

(18) RESOLVED, that as Southern Baptists we will engage, with God’s help, in establishing equal justice and protection for the preborn according to the authority of God’s Word as well as local and federal law, and call upon pastors and entity leaders to use their God-given gifts of preaching, teaching, and leading with one unified, principled, prophetic voice to abolish abortion, and be it finally

(19) RESOLVED, that, because abolishing abortion is a gospel issue, we will call upon governing authorities at all levels to repent and “obey everything that [Christ] has commanded,” exhorting them to bear fruit in keeping with repentance by faithfully executing their responsibilities as God’s servants of justice, and working with all urgency to enact legislation using the full weight of their office to interpose on behalf of the preborn, abolishing abortion immediately, without exception or compromise (Mark 6:18; Matt 28:18-20; Rom 13:4, 6).