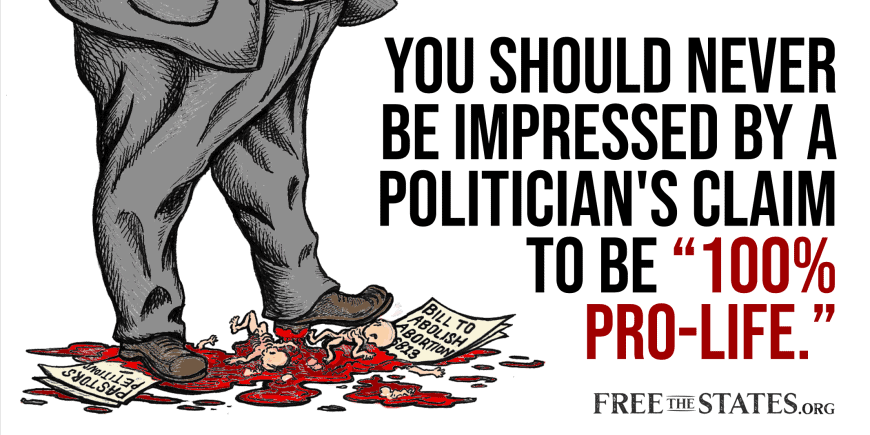 In Oklahoma, we do not lack for pro-lifers. Every Okie and their mother is “100% pro-life.” We have pro-life super majorities at every level of our state government. Whatever the pro-lifers who lead our state government want to be the law on abortion, they make the law. The reason abortion is still legal in Oklahoma is because pro-life super majorities are making a deliberate choice not to abolish abortion.

We don’t need more pro-lifers. Adding to the supermajority makes no difference if the super majority is choosing not to abolish abortion. What we need is for pro-lifers to become abolitionists or be replaced by abolitionists. #PLEXIT

We’re in an election season and politicians know that to win in the vast majority of Oklahoma districts, they have to be seen as anti-abortion. That means a lot of pandering. We need to be able to see through the pandering.

Don’t be impressed by someone’s claim to be pro-life. Again, it’s “100% pro-life” politicians who are at the capitol voting to keep abortion legal. Ask for more specificity: Will they support the Abolition of Abortion in Oklahoma Act? Feel free to use questions from our candidate questionnaire as a guide for your conversations with prospective Representatives and Senators.

If they say they won’t support the Abolition of Abortion in Oklahoma Act or respond with platitudes about being pro-life, they’re not going to help abolish abortion and don’t deserve support. The capitol is already filled with pro-lifers who do nothing to abolish abortion. We need some abolitionists.

Here's what it looked like for the Oklahoma Senate to kill SB13 and keep abortion legal in their state for another year. Each one of these Senators will stand before God and give an answer for what they've done.