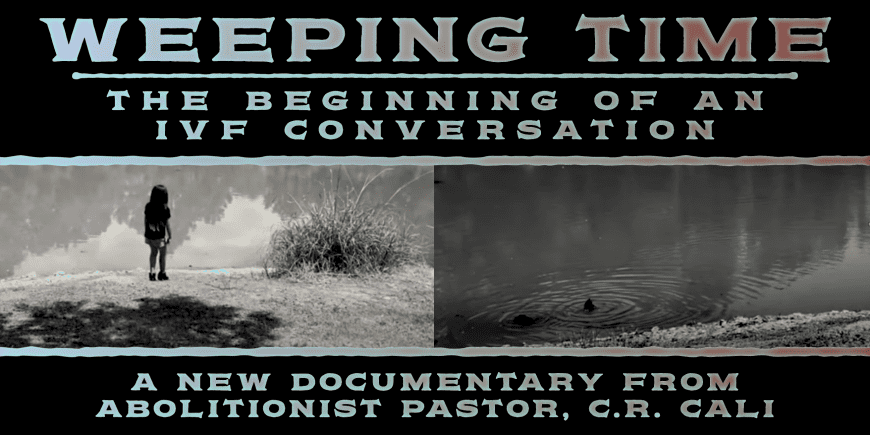 Like many young couples, Brian and Ying Payton got married desiring a big family. To their dismay, five years went by without any sign of pregnancy.

Brian had always believed that IVF was morally wrong, but the couple felt like they had to do something, so they turned to fertility drugs and intrauterine insemination. They still couldn’t conceive.

Exasperated, Brian caved: “It was a very morally compromised decision to go forward with IVF, and the reason why we did is because we felt like we were missing something in our life. You look at it sort of like a puzzle, right? There was a piece of our puzzle that was empty, and if we don’t have a child, our puzzle will never be complete.” Admittedly, the reason for their decision was rooted in a desire to take control over their own happiness and satisfaction. “That was the most self-reliant we were, and the least reliant on God that we were in our life,” Brian said.

The couple provided their eggs and sperm to fertility doctors who then created seven zygotic human beings: Brian and Ying’s children. The Paytons were anxious, but IVF seemed like the surefire way to grasp hold of what they had so long desired.

They received a call four days later asking them to come to the fertility office for a meeting in which they were coldly told that all of their embryos had died. “I don’t have the problem that a lot of Christians do today where they look at the embryo as something other than their child. So for me, it was very emotional. It was basically — my children died,” Brian said. Depression and bitterness toward God quickly ensued as the Paytons came to terms with what had transpired.

Their tragic IVF story is the inspiration behind the new documentary Weeping Time, a production of Doctrine of Balaam author C.R. Cali. The project features interviews with families who have participated in traditional IVF, families who have adopted abandoned embryos, an IVF doctor, and theologians including Dusty Deevers, Blake Gideon, Kelly Greene, Owen Strachan, and George Grant.

From the lows of the death of the Payton’s seven children and the scandalous truth about the IVF industry, to the highs of the Malone and Fondren families rescuing embryos left for dead by their parents, Weeping Time is a both an emotional roller coaster and an intellectual stimulating dive into an area of ethics largely untouched by Christian ethicists. (While a number of pastors and theologians are featured, not one of the numerous Christian ethics professors Cali approached for an interview wanted anything to do with this subject matter.)

Abortion is rightly beginning to receive the level of attention from the Church it has long deserved, but we must not overlook the war against the image of God being waged by the IVF industry and its proponents.

Dr. John David Gordon, a reproductive endocrinologist and professing Christian, spoke candidly, if rather matter-of-factly, to Cali about the grim reality of parents and doctors creating more children in labs than they have any intention of giving birth to.

“When IVF started, we were just working with the one egg…The problem is going after one egg isn’t as efficient because you might not get that egg, the egg may not fertilize, it might not grow. So using fertility drugs, what a doctor is doing is rescuing those extra eggs…so rather than just one egg getting to the finish line, multiple eggs are getting to the finish line…The problem is, as soon as you have more embryos than you’re comfortable placing back in utero, now you have to do something with those extra embryos…

The patients would go through these cycles that they had an excessive number of embryos and they froze them, but then they never came back for them: what happened to those embryos? And that’s where we think — we don’t really know — at least probably 1.5 million frozen embryos in the country and it goes up by about 18 percent a year.”

And why? Why do so many image bearers end up in freezers, likely to be discarded or experimented on? The callous disregard for human life that defines postmodern society is a major factor, but God-fearing men and women are participating in IVF as well. As Brian described, the reason for this is the tendency for hurting husbands and wives to rely on themselves to acquire their own happiness rather than trusting God to satisfy.

Touching on the desire of so many to take the creation of human life into their own hands, Deevers explained that “Idolatry is taking a good thing and make it an ultimate thing, such that you cannot be satisfied unless you have it.” Piggybacking on Deevers’ definition, Cali added, “And you would be willing to do anything to get that thing because that’s the source of your happiness. That’s the source of your identity.”

Brian agrees, diagnosing his own issues at the time of his IVF journey as stemming from idolatry:

“I have repented of my involvement in IVF. It is something I deeply regret. As I wrap it up from a conclusionary standpoint, I was willing to participate in an unethical and evil way of trying to accomplish a good thing. But the ends don’t justify the means. I think so many couples get to the place where they self-deceive; at least I did, where it was the ends will justify the means. At the end of the day, it’s idolatry, but it’s basically — what I’ve envisioned for my life, that coming to fruition justifies it.”

But the Payton’s story does not end there. God was working through all of it to draw the Paytons to Himself: “I remember thinking when I was reading the book of Job, and the thing that really sat with me for months was — God doesn’t give Job an answer at the end of the book. He gives him an answer in a way, but He doesn’t answer him. And basically what Job is left with is ‘Do you trust God?’

“I guess after that reflection and prayer, I came to the realization that that is basically what we are left with when it comes to infertility. We are left with the decision — and I do believe God gives us the decision — ‘are you going to trust me?’ And at the end of the day, that has to be enough. That doesn’t make it easy…It is a very lonely road that you have to walk when you have to walk down this road, and the only comfort that you can count on is placing your trust in God that He has made that road for you to walk down and you know that, at the end of the day, everything God does for believers is for His glory and it’s also going to be good for you.”

Cali, a small town pastor, did not have a large budget when he began this project, but he has provided an invaluable resource to the Church that we may come to think more deeply about this practice, its theological implications, and its impact upon God’s image bearers. Watch Weeping Time below.