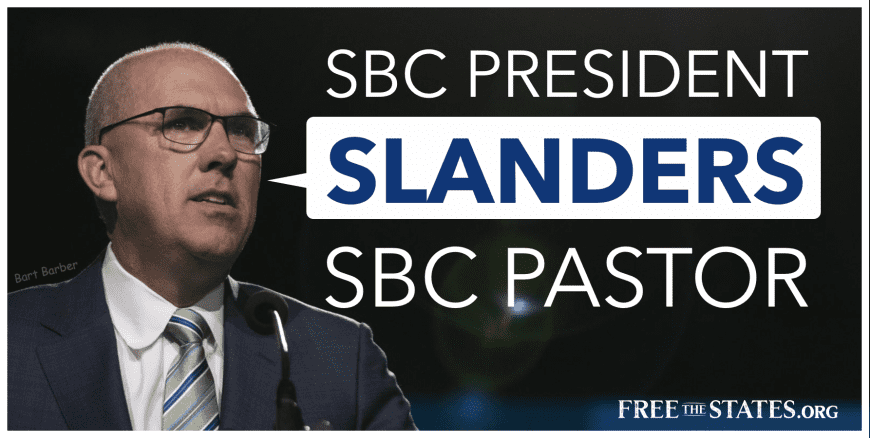 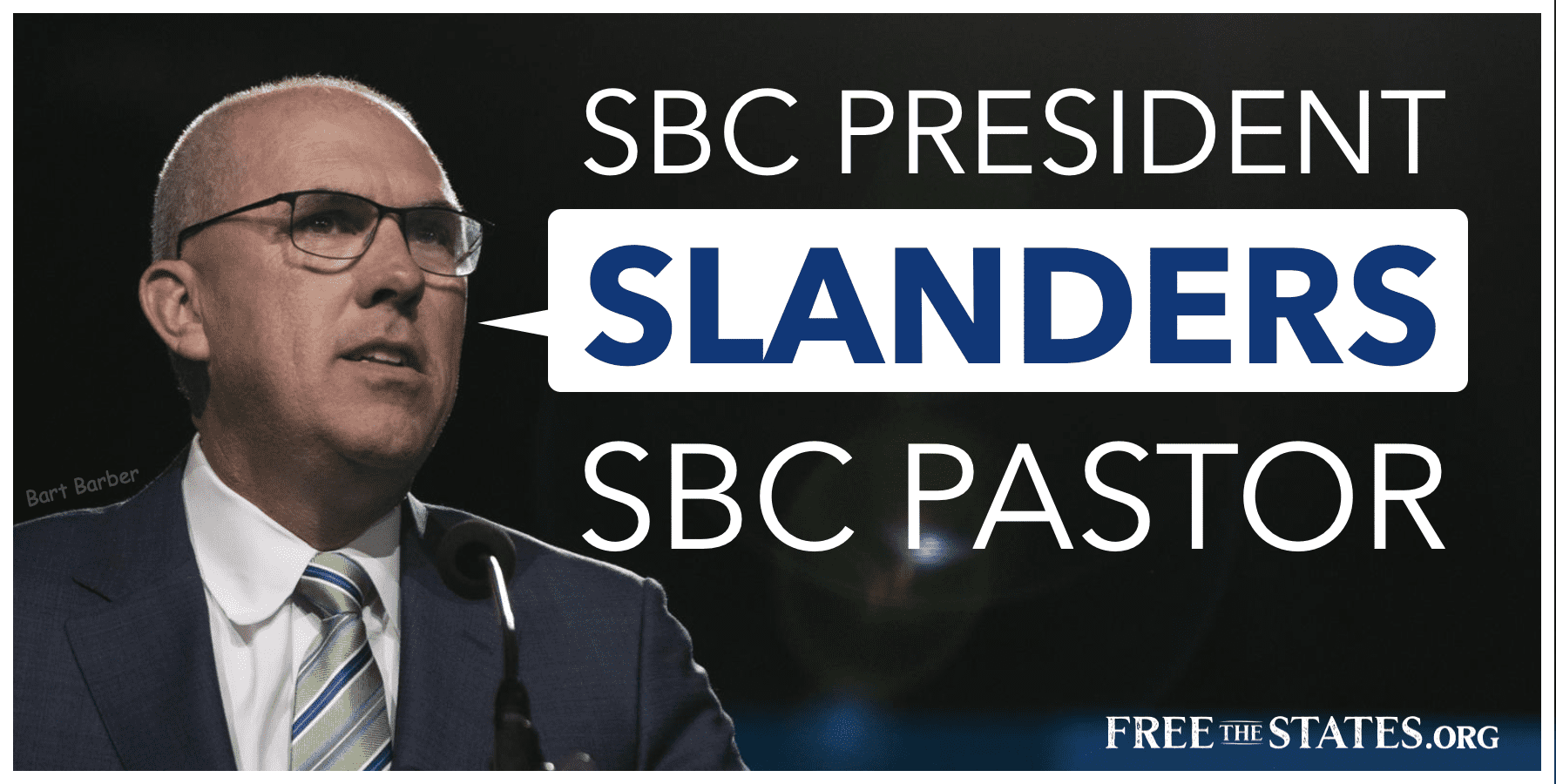 Last week, on Sep. 14th, Dusty Deevers, SBC Pastor of Grace Community Church of Elgin, OK, commented on the ERLC’s appointment of Brent Leatherwood. It is crucial to understand what is being said here because the facts and history in this tweet are what caused the following Twitter storm. Deevers tweeted:

“In Louisiana this spring and at SBC annual meeting this summer, Brent Leatherwood sided against the innocent preborn now he leads the ethics and policy arm of the SBC. We glory in our shame.” 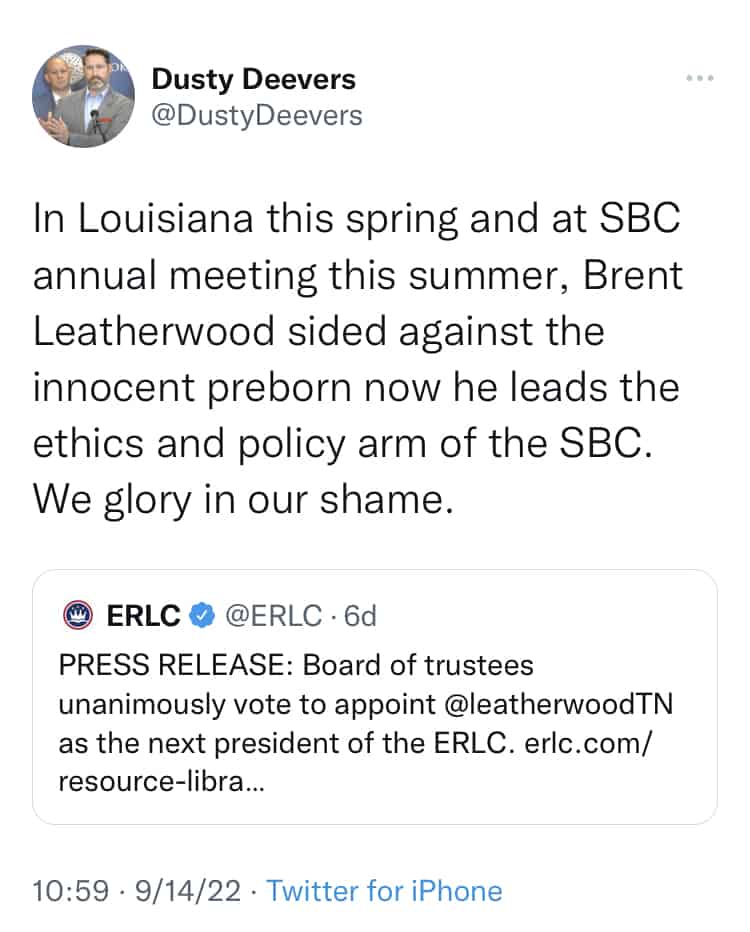 Important historical context: In May of this year, Leatherwood joined the effort to kill HB813, (the Abolition of Abortion in Louisiana act) via an open letter from Pro-life organizations and leaders that pleaded with pro-life legislators to oppose all legislation that criminalized abortion as murder – something abolitionists hold is fundamental in establishing justice: that is, that abortion will not be abolished until it is criminalized as murder, giving the equal protection of the laws for the preborn.**

“This tweet represents the lowest point of dishonesty to which we can descend when we sell out to the crass tone of secular politics instead of following the way of Christ.” 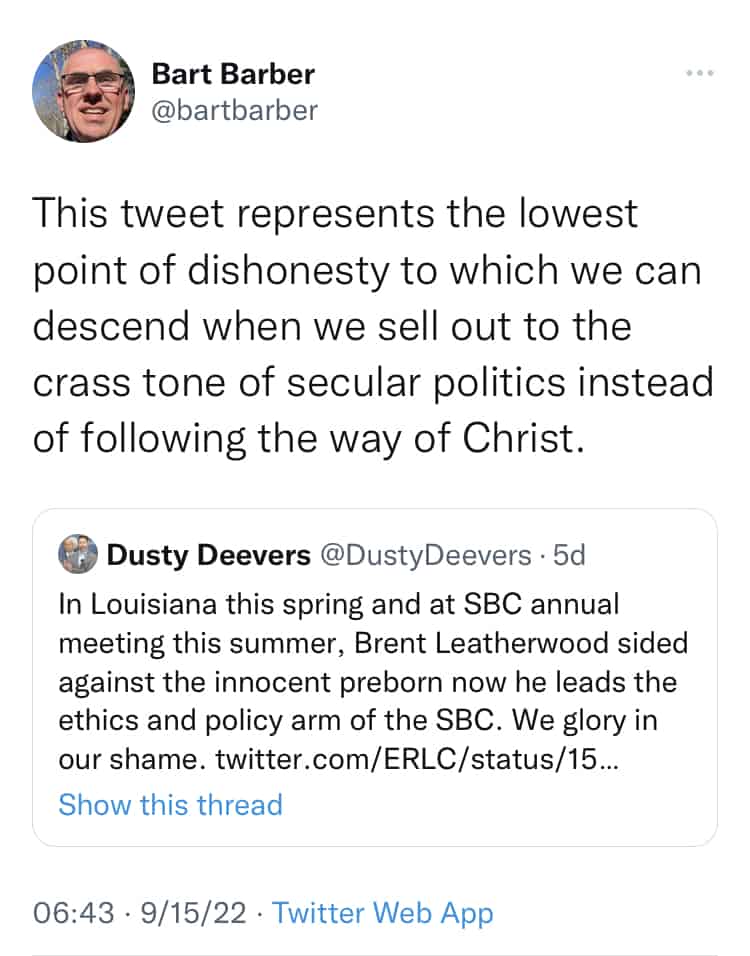 Barber states that Deevers is attacking the historical pro-life position of the Southern Baptists. This is true. Deevers is not pro-life: he is an abolitionist and an exemplary leader within the movement at that. Deevers – founder of Rescue Those and Southern Baptists Abolishing Abortion – along with almost every abortion abolitionist, is happy to explain to anyone who asks what abolitionism is and why the Pro-Life Movement and the Abolitionist Movement are fundamentally and theologically at odds* with each other. Of all the things Barber later said about Deevers, this solitary statement is accurate.

The deeper one dives into the differences between the pro-life position and the abolitionist position, the clearer it becomes that Deevers is actually standing on a solidly biblical position, having repented of formerly using “secular politics” and compromising our foundation of the Word of God.

Barber continues in another fifteen tweets detailing the pro-life work Southern Baptists have done. Pro-life legislation regulating abortion as healthcare – which Barber praises – is an often well-meaning attempt towards making abortion unthinkable and lowering abortion numbers; but in pro-life states, it is the chief (if not sole) opposition to abolishing abortion.** Barber goes on to not only lie about what abolitionist legislation does, but he also assigns Deevers ill motives in the process.

He brings up coerced abortions, ignorant to or ignoring how an abolition bill complements the coercion laws we already have on the books: laws protecting those who commit a crime under duress, and prosecuting the aggressors.

There is no semblance of honesty here – let alone Christlikeness – either in understanding a brother’s love and concern for biblical justice or how our laws works to protect the innocent. 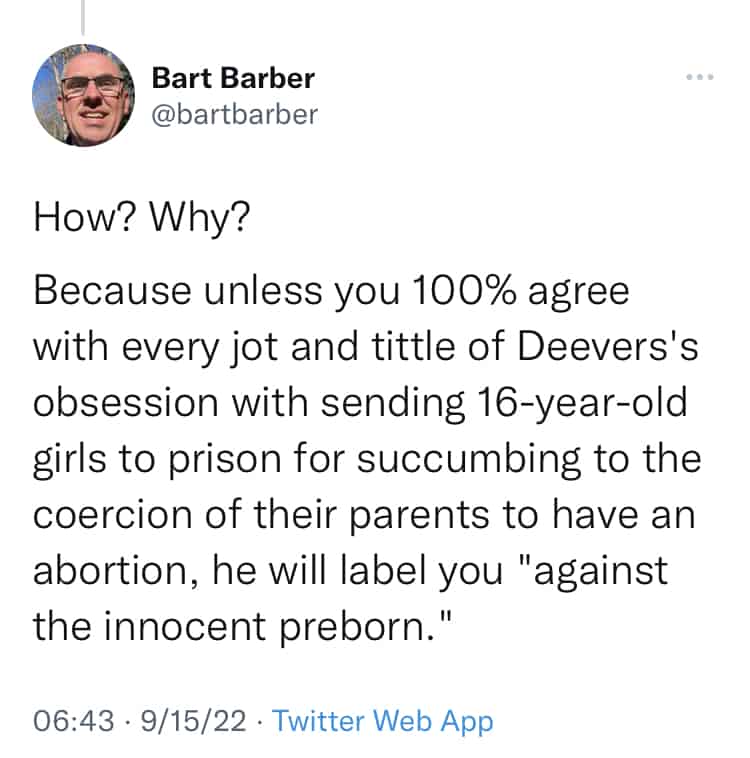 Next, Barber brings up ectopic pregnancy. Reading Barber’s tweet, it sounds like he believes that our homicide laws need exceptions written into them for hard medical cases. This article is not intended to flesh out the conversation on ectopic pregnancies – but if Barber was willing to have a conversation with Deevers, he could learn about our current laws on medical triage. Laws that require medical professionals to treat all humans with dignity, and save as many lives as possible. The current laws that protect Barber from being murdered by a medical professional should equally protect image-bearers of God in utero and in fallopian tubes from murder, and where needed, spur on research towards sparing those lives. 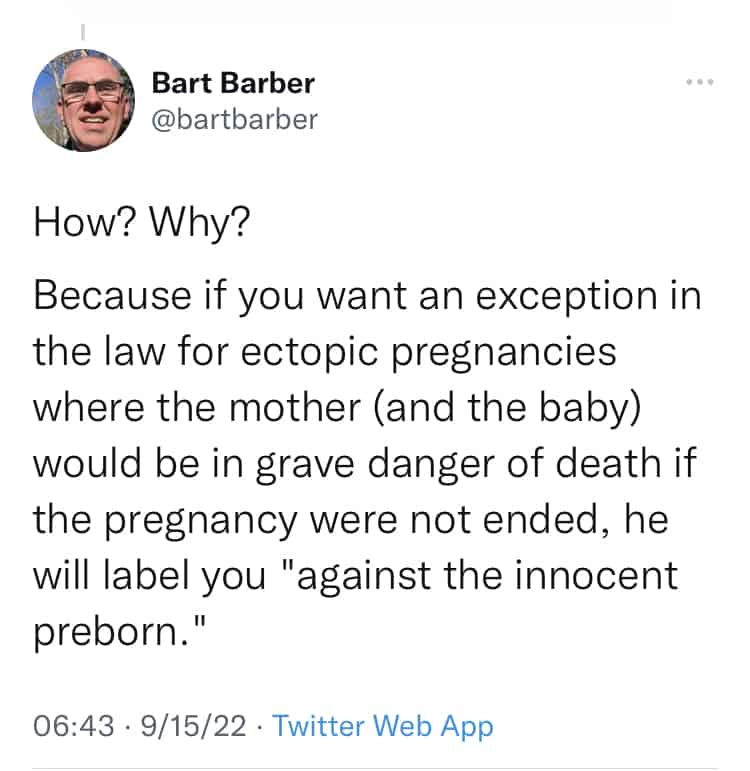 At the end of Barber’s thread, he falsely accuses Deevers of gossip and rabble-rousing, then baselessly asserts that Deevers is squashing the truth in an effort to gain popularity on Twitter. 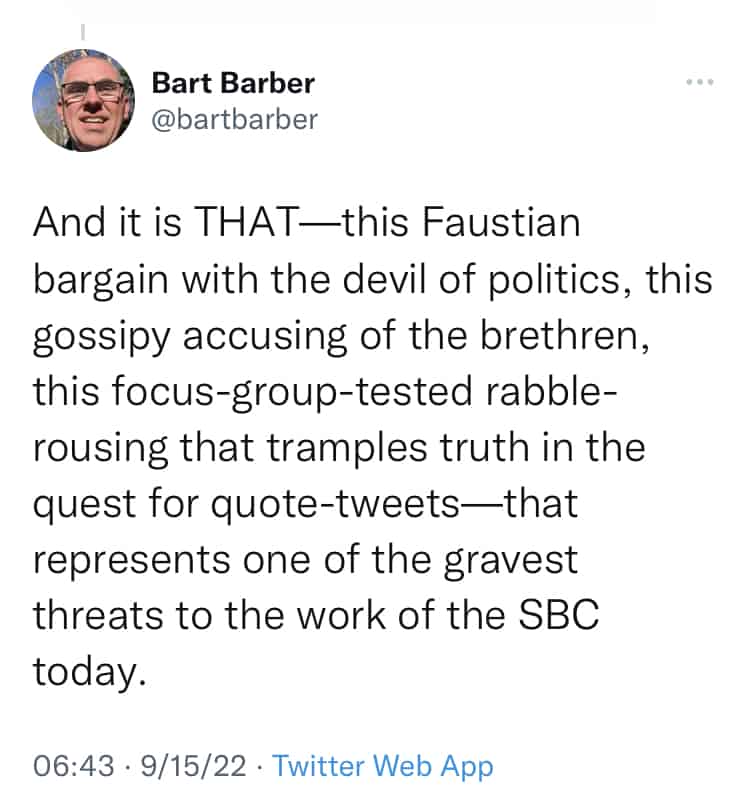 The evidence for this is nonexistent – especially when examining Deever’s personal life – but Barber’s tweets so far have had more logical fallacies to make abortion abolitionism look bad than evidence of work to be accurate, honest, and Christlike in his evaluation of Deevers and his position. One SBC church, Grace Family Baptist, noted this as well and commented:

“How many logical fallacies can you cram into one tweet thread: appeal to authority, hyperbole, no true scotsman, straw man, hasty generalization, anecdotal evidence, Texas sharpshooter, and personal incredulity. But, the worst part is the Ninth Commandment violations.”

The irony is deafening.

Since this offense, Deevers and Bradley Pierce – an attorney and abolitionist – have both individually asked Barber to have a conversation with them. Barber has been confronted by dozens of Christians and pastors throughout the SBC, explaining to him where he’s wrong, and exhorting him to repent and apologize to Deevers for his error. 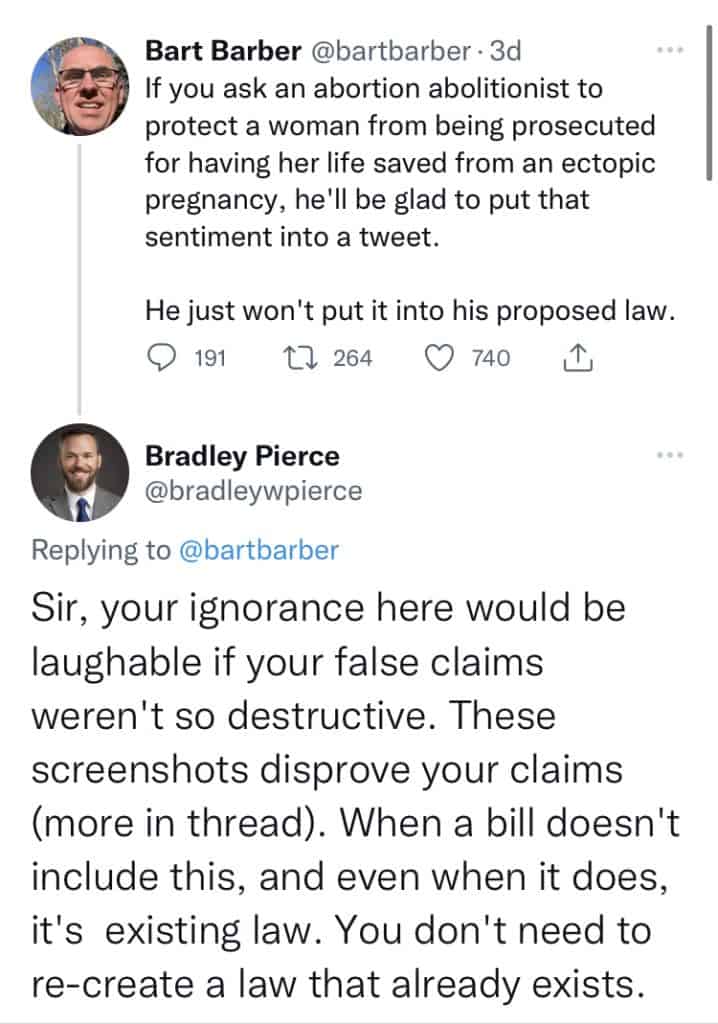 On September 20, Pierce and Deevers hosted a roundtable discussion with abolitionist pastors from around the country, discussing Barber’s tweets and addressing any concerns one might have after reading through them. Barber was invited to this discussion but understandably was unable to attend as it took place during the meeting of the SBC Executive Committee.
Deevers and others have continued to reach out to Barber, asking for public debate over the issues, or simply conversation on the phone to address what are hopefully misunderstandings that led to the untruths that he has publicized. To date, Barber has not responded.

As much as pro-life men like Barber persist in their anti-abolitionism, they do not want abortions to continue. They want abortion to end. However, they are against abolishing abortion. In other words, pro-lifers and abolitionists alike all hope and pray for an end to abortion: a day when not one more baby will be slaughtered in the womb. We know when Christ returns there will be no more death, and we look forward excitedly to that day.

Abolish is a word describing legal action, and it means to do away with a system or practice: in this case, the practice of modern-day child sacrifice. To do away with this practice, it must be illegal – that is, criminalized as murder. Meaning that the same laws that protect you from murder would be applied to equally protect babies in utero from murder by abortion.

Why is criminalization needed to abolish abortion?*** Well, quite frankly, because the hearts of men and women are desperately wicked. As long as a mother can murder her own baby without consequences, she will. Murder-minded parents are selfish. And because their main concern is self, the possibility of facing prosecution for the murder of their child would lead them away from murdering their child.

Should the law establish righteousness and the civil government bear the sword against the evildoer as God commands of them in Romans 13, those considering murdering their children would be deterred from that heinous act. This is exactly what abolitionist legislation that Barber is fighting against will do.

To my brothers and sisters in Christ, I leave you with this strong exhortation: It is a grave error to oppose criminalizing abortion as murder. This indicates bigotry towards our preborn neighbors, lack of love for abortion-minded parents, lack of care for what God commands, and an endorsement of what God calls an abomination. But do not take my word for it, go back to the Word of God, and examine to see if there is truth in my claims.****

*The Liberator Podcast Episode 34: Five Reasons Why We Oppose the ProLife Movement

**Immediate, Not Gradual Abolition of Abortion

***Video: The Third Component of an Abolition Bill: Equal Protection | Article: What Abolitionists Believe on Criminalization

****The Liberator Podcast Episode 4: The Biblical Arguments for Abolitionism