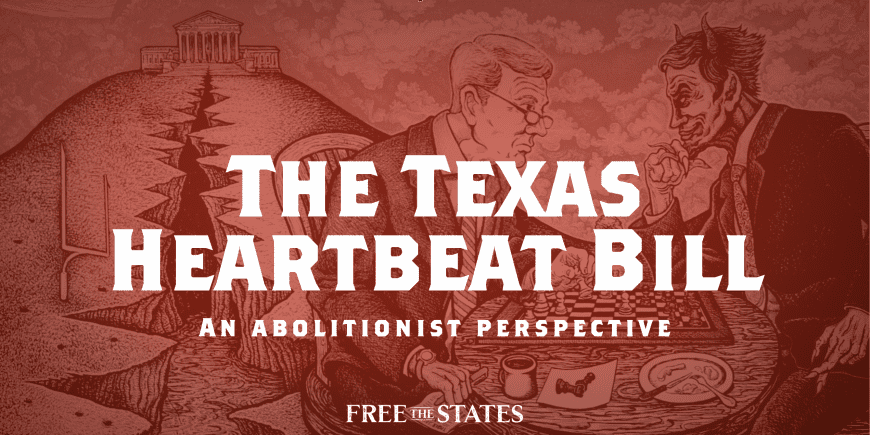 The Texas Heartbeat Bill is big news at the moment, as it is the first such bill banning abortion pre-viability to go into effect since Roe v. Wade. The reason the 5th circuit court and supreme court declined to give the serial killers at Whole Women’s Health the injunction they were asking for is because the bill prohibits Texas state officials from enforcing the new law.

Typically, a suit of this kind against a pro-life law would be filed against an agent of the State such as the attorney general or a department of health official, but there is no State actor to sue in this instance as the State is already prohibited from enforcing the law. The law places into the hands of private citizens the ability to sue an abortionist on behalf of an unborn child killed by the abortionist. Thus far, there is no rightful defendant for abortionists to sue. They have to wait for lawsuits to be filed against them and then argue that those lawsuits are unconstitutional.

A few observations from an abolitionist perspective.

The idea behind this bill is that it might be enforceable in spite of federal jurisprudence purporting to prevent pre-viability bans; that private suits against abortionists are untouchable by Roe, Casey, and federal precedent under the new law. If this is the case, why stop at a heartbeat?

Even with a bill that they believe will or could be a successful end run around the tyranny of the federal judiciary, they still chose to violate God’s law absent any even pragmatically compelling reason to do so. This is indicative of an addiction to compromise on the part of the pro-life establishment.

Pro-lifers will point to lives saved by this law, and it is conceivable that some lives will be saved that wouldn’t have if no law was passed. The pro-lifer then argues that because the abolitionist opposes the incremental bill, abolitionists would rather those babies have died. The truth is the exact opposite. It is the passage of bills like the heartbeat bill that allow every baby that is killed to be killed.

There was a bill to abolish abortion in Texas this session. The Texas Republican establishment killed that bill. In a vacuum, that fact would have ended many, if not most, of their careers. But it didn’t occur in a vacuum. It occurred in a context where they killed the abolition bill and passed a number of incremental bills in its place. They are then celebrated as pro-life heroes. The particular representative who denied the abolition bill a committee hearing (Stephanie Klick) got to be front-and-center in the celebrations of the passage of the heartbeat bill. “Pro-life” victories such as the heartbeat bill allowed these genocide-enablers to get away with keeping abortion legal.

It is for this reason that the 1832 abolitionist Declaration of Sentiments explained, “We regard as delusive, cruel and dangerous, any scheme of expatriation which pretends to aid, either directly or indirectly, in the emancipation of the slaves, or to be a substitute for the immediate and total abolition of slavery.” For as long as we allow politicians to get away with compromise, they will compromise.

Consider the situation from the perspective of the powers and principalities. How do you work to keep child sacrifice legal in a state like Texas where 77 percent of the citizens profess Christ? The most effective way is to give them “incremental victory” after “incremental victory” to lead them to think they’re winning, when the only thing allowing the governing officials of the state to get away with not abolishing abortion is said incremental victories. In chess terms, the devil is fine giving us some pawns as long as doing so keeps him in control of the game; as long as doing so keeps Christians from joining in a unified, prophetic voice calling the state to repentance in the name of Jesus Christ and working for the abolition of abortion.

It is for this reason that Elizabeth Heyrick wrote:

“He knew very well, that the faithful delineation of the horrors of West Indian slavery, would produce such a general insurrection of sympathetic and indignant feeling; such abhorrence of the oppressor, such compassion for the oppressed, as must soon have been fatal to the whole system… Our example might have spread from kingdom to kingdom, from continent to continent, and the slave trade, and slavery, might by this time, have been abolished all the world over: ‘A sacrifice of a sweet savour,’ might have ascended to the Great Parent of the Universe, ‘His kingdom might have come, and his will (thus far) have been done on earth, as it is in Heaven.’

“But this GRADUAL ABOLITION, has been the grand marplot of human virtue and happiness; the very masterpiece of satanic policy. By converting the cry for immediate, into gradual emancipation, the prince of slave holders [Satan], ‘transformed himself, with astonishing dexterity, into an angel of light,’ and thereby ‘deceived the very elect.’ He saw very clearly, that if public justice and humanity, especially, if Christian justice and humanity, could be brought to demand only a gradual extermination of the enormities of the slave system; if they could be brought to acquiesce, but for one year, or for one month, in the slavery of our African brother, in robbing him of all the rights of humanity, and degrading him to a level with the brutes; that then, they could imperceptibly be brought to acquiesce in all this for an unlimited duration.”

3) Unlikeliness of Plaintiffs Winning In Court

It is far less important to the case against the heartbeat bill than the previous two points, but it is worth mentioning that the bill is unlikely to result in successful private enforcement. As Abolish Abortion Texas pointed out, private suits, of course, must still be enforced by government courts which have proven time-and-time again that they are in the tank for the abortion industry.

Further, private citizens will have to prove in court that the abortionist did not detect a heartbeat without the many powers of investigation that only the state enjoys. And as has been demonstrated by ultrasound tech Sarah Cleveland, ultrasound images are easy to manipulate. Without the investigation resources of the state, proving that the abortionist manipulated the ultrasound to purposefully not see the heartbeat will be very difficult in most cases.

God loves justice, and hates injustice. This law is ungodly and Christians should not support it. Instead, they must join in unified, prophetic voice calling for justice, as God defines it, to be established.

Those who wish to learn more can register for the Pro-Life Is Not Enough Conference being held at Redeemer Presbyterian Church in McKinney, TX on November 5-6.

They can also watch this podcast dealing with the Biblical arguments against pro-life compromise like the heartbeat bill.