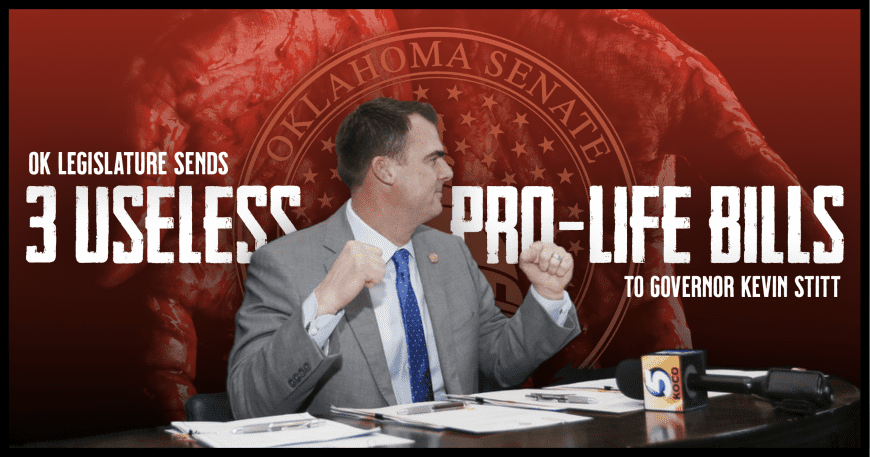 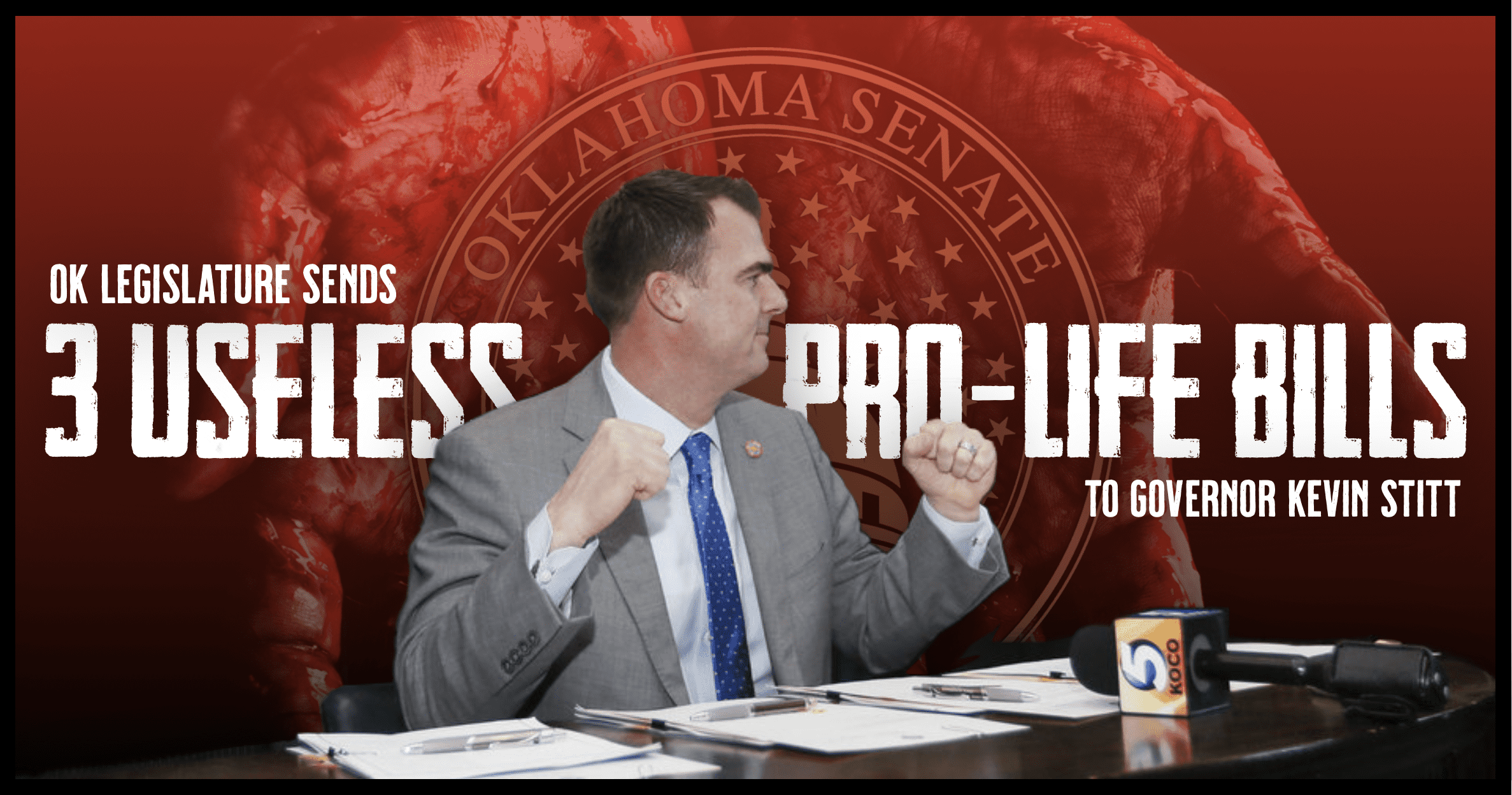 The growth of the Abolitionist Movement has forced pro-life politicians to pursue their incremental strategy much more aggressively. On Tuesday, the Oklahoma legislature passed three pro-life bills, two of which (HB1102 and HB2441) are the strongest pro-life bills ever passed in Oklahoma. Now, that’s not to say that any of this legislation will do anything. All three bills submit to the federal judiciary, meaning that there is no hope of any of them having any substantial impact on abortion. Any abortion bill that doesn’t defy the federal judiciary isn’t worth the paper it’s printed on.

HB1102 defines abortion as “unprofessional conduct” which results in the suspension of a physician’s license for “not less than one (1) year.” There are two primary problems.

1) When enacted, HB1102 will be an “undue burden” on the right to abortion, meaning it will be immediately enjoined and eventually struck down in court. The bill has no chance of being upheld for at least 3-4 years, and extremely little chance of ever being upheld. It has no language directing the State Board of Osteopathic Examiners to ignore court decisions against the bill, so it’s not going to do anything.

2) Even if it were to go into effect, HB1102 does nothing about the legal standing of preborn children. It would still be perfectly legal for mothers to murder their children by self-induced abortion. Equal protection under law for preborn children is what is needed.

HB2441 is a heartbeat bill, purporting to ban abortion at the time when a heartbeat is detectable by the abortionist.

Four problems with this bill:

1) HB2441 is unbiblical and unjust. It regulates which babies are old enough to be deserving of legal protection, and which can be legally murdered. It violates God’s commands against murder.

2) Because it is unjust, HB2441 dehumanizes preborn children without a detectable heartbeat. In 2019, Ohio State Senator Andrew Brenner’s aide told me that the abolitionist information I gave her was “very interesting, but it’s Senator Brenner’s personal religious conviction that life begins at a heartbeat.” Last year’s Oklahoma Heartbeat Bill author Paul Scott said in a committee hearing that a heartbeat is the first sign of life. Pennsylvania Heartbeat Bill author Stephanie Borowicz said in a committee hearing earlier this month that “life ends when the heartbeat stops and life begins when the heartbeat begins.” Her witness, pro-life doctor and activist Monique Ruberu, agreed. The heartbeat bill is teaching the culture (including pro-lifers) dehumanizing misinformation about preborn children; which is the third of five reasons abolitionists oppose the Pro-Life Movement, as explained on last week’s episode of The Liberator Podcast.

3) Like the licensing bill, the heartbeat bill has no chance of being upheld for at least 3-4 years, and very little chance of ever being upheld. It has no language directing the governor and attorney general to defy the federal judiciary, so it’s not going to do anything.

4) The abortionist is being entrusted to find the heartbeat, which, as demonstrated by ultrasound tech Sarah Cleveland, is very easy to manipulate.

Though the bill is not worth supporting for the aforementioned reasons, there is one good aspect of HB2441 that should be noted. As opposed to most heartbeat bills and pro-life legislation which only provide short prison sentences for those who murder preborn children in violation of the bill, HB2441 classifies the murder of a child after a heartbeat is detected as homicide. This is a step in the right direction for pro-life legislators in Oklahoma.

HB1904 reads, “No person shall perform or induce an abortion upon a pregnant woman unless that person is a physician licensed to practice medicine in the State of Oklahoma who is board certified in obstetrics and gynecology.”

1) There are two possibilities. Either there are a bunch of non-board certified OBGYNs performing abortions who would be prevented from doing so under this bill, meaning that the bill violates the “undue burden” standard from Casey v. Planned Parenthood and will be struck down; or there aren’t a bunch of a non-board certified OBGYNs performing abortions. Either way, the bill does nothing.

2) Regulating abortion so that it’s only done by professionals actually strengthens the abortion industry. It gives them more credibility in the public eye. It makes abortion a more respected and palatable practice. During the battle against slavery in England, anti-slavery gradualists passed the Dolben Act in 1788 to make slave ships more comfortable for slaves. Whatever their intentions, their bill backfired. In A Letter on the Abolition of the Slave Trade, abolitionist William Wilberforce wrote, “the Slave-carrying bill [was] a measure which a very few years after was acknowledged, as it is still universally confessed, to have been beneficial to [the West Indian Body] [p. 275].”

A few pages later, Wilberforce explained that “half measures” that regulated slavery helped the slave lobby by channeling the intense anti-slavery zeal in a direction other than abolition: “[L]et me most seriously urge on the conscientious deliberations of those who…by their fatal proposal of gradual, instead of immediate abolition, dashed the cup of happiness from the lips of the wretched African, at the very moment when at last he appeared likely to taste it, and who thus proved in fact the most efficient supporters of the Slave Trade. A vast majority in Parliament were then so much alive to the principles of justice and humanity, that all direct opposition would have been utterly ineffectual. But this kind of half measure, however unintentionally, exactly answered the purpose of our enemies, by giving time for the zeal of men to cool, and providing an expedient by which, aided by a little of that self deception which we are all apt to practice on ourselves on suitable occasions, they might feel the complacencies arising from an act of justice and humanity, without paying the price or making the sacrifice which those principles required [p. 294].”

There were strong anti-slavery sentiments in parliament, so the only way to keep slavery legal was to convince the anti-slavery factions to be satisfied with mere regulations of the practice instead of abolition. The exact same dynamic is at play in Oklahoma and every other conservative state. There is plenty of anti-abortion zeal, but it is being channelled by pro-life politicians and organizations toward regulating abortion. Most of those same politicians and organizations are opposing abortion’s abolition.

For this reason, it is crucial that we do not give pro-life politicians any credit for passing bills like HB1102, HB2441, and HB1904. They have to know that Oklahomans will not settle for anything less than justice, and they have to know that we know these bills are the tactic they are using to delay the abolition of abortion. It’s time for our pro-life politicians to stop delaying abolition with their incremental schemes. It’s time for the Oklahoma State government to obey Christ and uphold the Constitution by abolishing abortion.