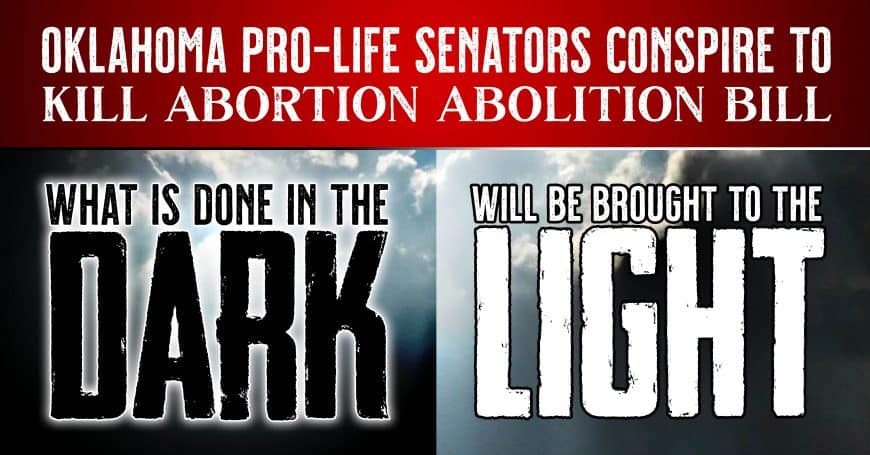 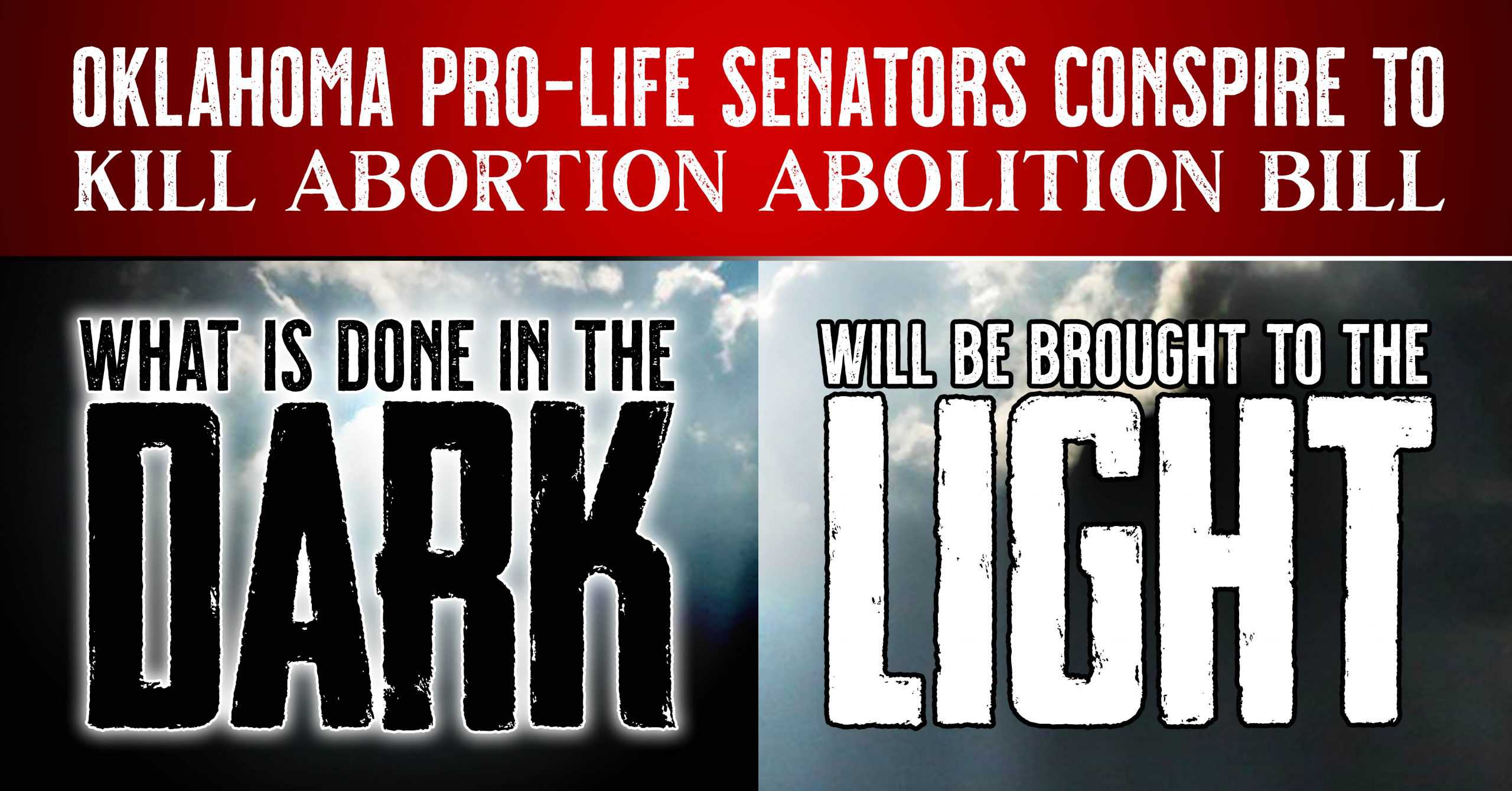 On Feb. 3rd, 2021, Oklahoma State Senator Warren Hamilton of District 7 presented the Equal Protection and Equal Justice Act (SB495) to the Senate Health and Human Services committee. This bill would’ve criminalized abortion as murder and provided equal protection to all preborn human beings in the state of Oklahoma. 10 State Senators, seven Republicans and three Democrats, had the responsibility to vote on the bill. Here are their names:

You might think, “Well of course this is going to pass! Seven pro-life Republicans will vote yes and it’ll pass!” Sadly, you would be wrong. Every single one of the senators listed above voted against the bill. The political leaders we’ve entrusted to establish justice for the weak and fatherless, protect the innocent, and punish those who do evil are instead participating in backroom meetings and organizing their efforts to oppose bills that would abolish abortion in the state of Oklahoma.

In Feb. 2020, a nearly identical bill, Senate Bill 13, the Abolition of Abortion in Oklahoma Act filed by former State Senator Joseph Silk, was simply ignored by the very same committee. It died without ever even being heard. Republican pro-life Senator Greg McCortney, chairman of the Health and Human Services Committee, refused to allow the bill a hearing. As a result, Senator Silk made a motion for Senate Bill 13 to be brought out of committee directly to the Senate floor. What shortly followed was the Republican, conservative, pro-life Floor Leader Kim David, motioning to table the bill to abolish abortion, thus, killing the bill. The motion to table the bill and not hear it was brought to a vote on the Senate Floor. Four Senators voted to hear the bill, five did not participate in the vote, and the other 38 State Senators voted against hearing the bill that would establish justice for our preborn neighbors, honor the Lord, and criminalize abortion as murder. Of the 38 senators who voted to table the bill, 30 of them were pro-life Republicans.

It is very apparent that Senate leadership is doing everything in their power to stifle this bill and the Abolitionist Movement by means of backroom dealings and pressuring the rest of the Republican Senators. The same bill of abolition that Senate leadership refused to even give a hearing for the past two years, is the bill they are eager to hear swiftly and vote against without any Republican debate whatsoever as soon as possible this year. The vote was unanimous. There was no discussion from any Republicans. All of the committee members walked into that room knowing how they were going to vote on that bill. The reason these Senators killed the bill was that they did not want to upset Senate leadership and risk losing their power as committee members. Joseph Silk was stripped of his vice chairmanship in 2019 for his advocacy for abolition. When confronted last year about his need to push the HHS chairman to hear SB13, Paul Scott, a former senator and former member of this committee, responded by saying, “What do you want me to do? Challenge the throne?” He was referring to the heavy-handed pressure he was receiving from Greg Treat and Kim David, the two pro-life Republicans who have the greatest power in our state’s Senate. Before the vote on the motion to table SB13, all motions and hearings came to a halt for more than half-an-hour as David roamed the Senate floor whipping up votes against the bill.

Greg Treat and Kim David do not want to have to deal with the annoying Christians this year. We have pressed them to pass this abolition bill for the past two years, and they have tried to ignore us the entire time. Killing the bill this swiftly, the week before Abolition Day when they know that thousands of Christians will be showing up to lobby for the bill, is clearly an attempt to dampen the spirits of those seeking to establish justice for the preborn in the state of Oklahoma. Without question the elected officials of Oklahoma who would claim to closely represent our Christian values and morals at the state capitol have chosen, instead of doing what is right before God, to make arrangements and plans in secret in an effort to protect their jobs over and above the lives of our preborn neighbors.

It is also just as clearly evident that WE, the people of Oklahoma, bear an immense guilt for having elected these leaders, supported them, voted for them, and given money to their campaign efforts, believing them to be worthy of this responsibility when they are not. Let us now turn to the scripture together with hearts of humility.

He also told this parable to some who trusted in themselves that they were righteous, and treated others with contempt: ‘Two men went up into the temple to pray, one a Pharisee and the other a tax collector. The Pharisee, standing by himself, prayed thus: ‘God, I thank you that I am not like other men, extortioners, unjust, adulterers, or even like this tax collector. I fast twice a week; I give tithes of all that I get.’ But the tax collector, standing far off, would not even lift up his eyes to heaven, but beat his breast, saying, ‘God, be merciful to me, a sinner!’ I tell you, this man went down to his house justified, rather than the other. For everyone who exalts himself will be humbled, but the one who humbles himself will be exalted.”

As we consider these words of Christ, we must examine our own participation and apathy regarding the murder of our preborn neighbors. Though to more clearly apply this parable to ourselves maybe we should read it instead as the following, putting ourselves in the shoes of the Pharisee: “God, I thank you that we are not like other States. We are not like the corrupt, unjust, states like California and New York. We vote for political leaders who believe in God’s Word and establish justice accordingly. We are conservative, Republican, pro-life, and would never oppose a law to protect our preborn neighbors.” We live in a constitutional representative republic, and our elected leaders are supposed to be a direct representation of the heart and will of the people.  Yet here we are, finding ourselves just on the other side of a vote that was cast by seven pro-life, conservative, Republicans, who killed a bill that would abolish abortion in our state.

The Lord Jesus Christ, when proclaiming the Great Commission did not say “My authority exists in heaven but NOT on earth.” The Lord Jesus declared victory, power, and rule,  possessing ALL authority in heaven AND on earth, and as such, our state leaders are living in rebellion against the authority of the Lord Jesus Christ. It’s time for personal responsibility to be taken. It’s time for accountability to be transparent, honest, and real. It’s time to rally with one another in one voice, crying out on behalf of those who can not speak for themselves. The time for justice is now.

Not only are we to take no part in the unfruitful works of darkness, but we are to instead expose them (Eph 5:11). This shameful, sinful action taken by the members of the Health and Human Services committee must be exposed. All of this corruption, the secret meetings, the evil plans that have been devised at the State Capitol by our elected officials, these are the things keeping abortion legal within the state of Oklahoma.

Luke 12:1-3 — “In the meantime, when so many thousands of the people had gathered together that they were trampling one another, he began to say to his disciples first, ‘Beware of the leaven of the Pharisees, which is hypocrisy. Nothing is covered up that will not be revealed, or hidden that will not be known.  Therefore whatever you have said in the dark shall be heard in the light, and what you have whispered in private rooms shall be proclaimed on the housetops.”

Psalm 21:11 — “Though they intended evil against You and devised a plot, they will not succeed.”

The decisions that have been made by our elected Senators should make us cry out like the tax collector “God, be merciful to me, a sinner!” We can not walk around as if we are morally above other states in our union. Now is the time for heartfelt, life changing self-examination and confession. Praise be to God that we serve a great savior, who though our sin is great, His mercy is greater still.

What must we do?

See the following links to identify the State Senator of your district, and the member of the House of Representatives: