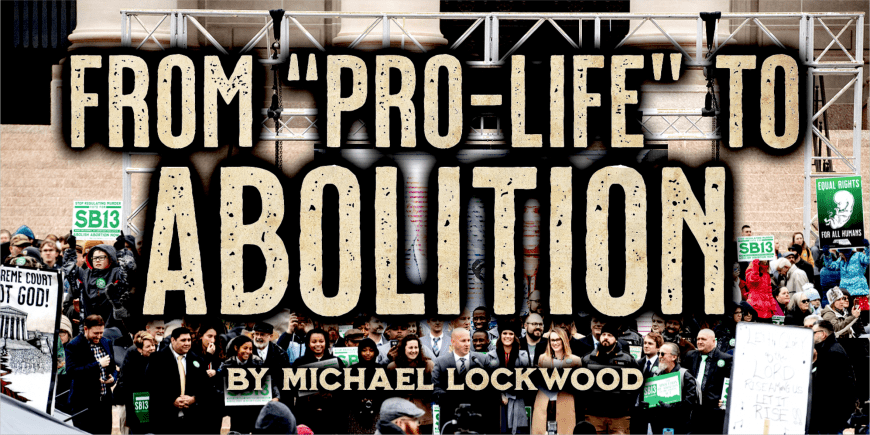 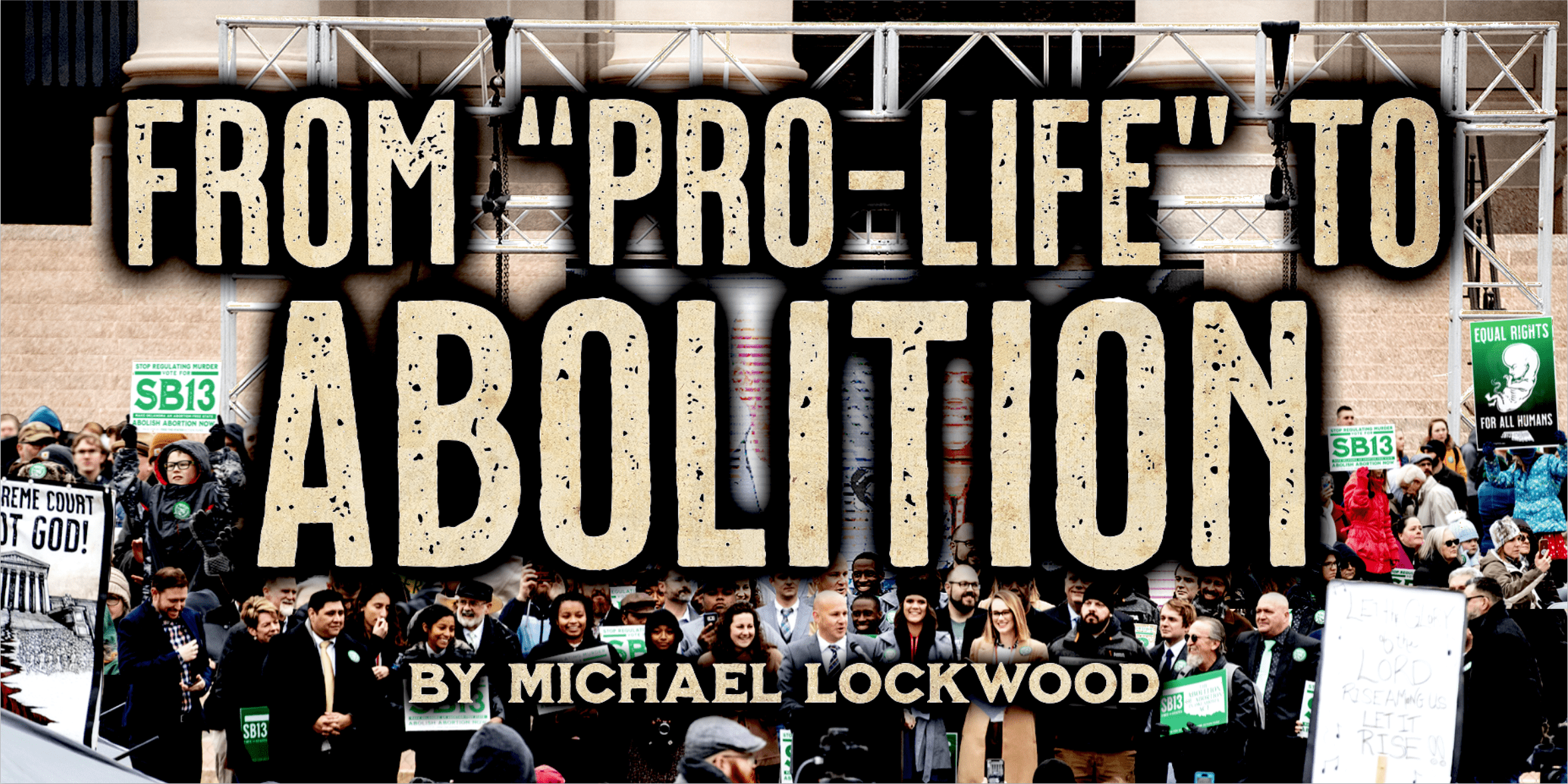 I have converted from pro-life to abolitionist. To all my pro-life friends, allow me to explain.

I now see total Statewide criminalization of abortion, and unconditional defiance of Roe v. Wade, as the most Constitutional, Biblical, and feasible way to abolish abortion.

There is only one justice on the supreme court who is confirmed to believe that Roe v. Wade should be overturned: Clarence Thomas. There are at least five who won’t even allow States to regulate abortion with a measly hospital admittance law (see the recent Louisiana case June Medical Services v. Russo), much less outlaw abortion completely. The supreme court no longer rules based on what the Constitution says; it rules based on precedent. There is virtually no hope of the supreme court overturning Roe within our lifetimes.

That’s why I think nullifying Roe is the most feasible way to end abortion. The reason I think it’s the most Constitutional is the following:

State defiance of the supreme court is also Biblical:

I don’t think these verses need much more clarification than what I have provided.

So, outright abolition via nullification is good. But what about incremental legislation? I had always been sympathetic to the pragmatic argument of trying to save as many babies as possible while working toward total abolition. In principle, this is true and good. That’s why sidewalk counseling, street activism, and working at crisis pregnancy centers are good and godly forms of saving babies. However, legislatively, I no longer hold to the pragmatic pro-life position. Here’s why:

First, it isn’t very effective in saving babies, if it saves any at all. Take the Ohio heartbeat bill. After it passed, before it went into effect, it was immediately struck down by the courts. Nothing ever happened, except a lot of misinformed people probably thought abortion was illegal after 6 weeks.

Every incremental law which bans abortion prior to 20 weeks has never gone into effect because they have all been struck down by the courts.

What about the 20-week ban, then? That law has actually gone into effect in several States. Does it save lives? Let’s look at the numbers. 98.7% of abortions happen before 20 weeks (look up “Abortion Surveillance 2014 CDC”). So, even if somehow every mother who would have killed her baby after 20 weeks forgot to hurry up and do it before she reached the point of it becoming illegal, the ban would only save 1.3% of babies who were aborted in that State. Pro-lifers may consider a law like that a victory, but it’s not. It allows nearly just as many babies as usual to be killed.

True, it might save some babies. BUT, it saves them at the EXPENSE of other children’s lives. Let me explain.

Incremental pro-life laws are actually a substitute for the complete abolition of abortion. (What?!) That’s right, incremental laws, in a sense, DELAY abolition. I did not formerly believe this. I thought our pro-life legislators were just doing what little they could with the power they had to fight abortion. But think about it: every pro-life majority legislature has the power to abolish abortion. All they have to do is nullify the supreme court. So why don’t they?

Is it because the other legislators don’t really want to abolish abortion? If that’s the case, those legislators don’t really believe that abortion is murder, and they aren’t pro-life. But if there ARE enough pro-life legislators to abolish abortion, then why are they settling for incremental legislation? There’s no excuse. By substituting abolition with incremental legislation, pro-life legislators aren’t “at least saving some babies.” They’re failing to protect all babies in their State even though they have to power to do so.

That’s what’s happening in Oklahoma right now. Currently, there is a huge movement of Christians to pressure their legislators to abolish abortion outright. But they won’t do it. Even though there is a supermajority of pro-life Republicans in the State senate and house, they refuse to abolish abortion. Every legislative session for the past several years, one senator has proposed a bill to abolish abortion. Every time, the bill gets killed, and all the pro-life legislators replace it with an incremental bill that they pass in order to appease their pro-life constituents. It’s wrong and it’s cowardly.

This leads to my final point: incremental pro-life legislation is actually immoral. This point was the hardest one for me to come to grips with, but there are at least two reasons that it is true.

I’ll start with the secondary reason. Incremental legislation is immoral because it is dishonest. Take the heartbeat bill. Every pro-lifer knows that a heartbeat doesn’t make babies valuable. But in order to argue for a bill like this, legislators have to use false premises. They have to pretend that a heartbeat is what gives babies value. They’ve literally done this! One legislator, Senator Paul Scott from Oklahoma, when arguing for a heartbeat bill, said “What this bill does is it defines life when life actually begins: when the heart begins to beat and when brainwaves are proven to exist in the fetus.” Ohio State Senator Andrew Brenner’s aide told my colleague James Silberman “It’s Senator Brenner’s personal religious conviction that life begins at a heartbeat.” This is the unintended result of “pro-life” legislation. People actually start believing and spreading this dehumanizing misinformation about preborn human beings. I’ve talked to countless “pro-lifers” whose standard for life was a heartbeat.

As another example, take the recent Louisiana hospital admittance law which was struck down by the supreme court. This law pretends that abortion is healthcare, and works from that false premise to the conclusion that women deserve quality healthcare and thus abortion facilities should be required to have admittance to a hospital within 30 miles.

Nowhere does this bill even address the fact that abortion is murder. In a weird strategic effort to save babies by making it hard for clinics to operate, pro-life legislators have to lie and pretend that abortion is healthcare. That’s dishonest.

That’s the secondary reason. The primary reason that incremental legislation is immoral is that it sanctions murder. To my knowledge, every law which protects only certain babies from murder necessarily codifies into law that it is permissible to murder other kinds of babies.

More importantly, however, it violates God’s Word. God’s Word condemns murder of all kinds. I didn’t think this way formerly. I thought, “at least it’s better than abortion being completely legal.” But the justification that “it’s better than abortion being completely legal” is actually a form of moral relativism. With this reasoning, passing a law codifying the legality of murdering a baby up to 24-weeks and making it illegal after that would be moral in California, because it’s better than what California had before, but immoral in Oklahoma, where there’s already a 20-week ban, so a 24-week ban would expand abortions.

This relativistic way of thinking is not right. Moral relativism is an unbiblical worldview. God’s standard of justice is consistent, and it is the duty of the government to apply it consistently (Amos 5:15, Romans 13).

I realize that the claim that incremental laws are immoral is very unintuitive for most pro-lifers. Looking back, I now see that, for me, the reason it was unintuitive was that I was operating on faulty presuppositions. My standards for what makes up a just law were skewed. Let me explain.

Abortion’s being totally legal is not the “starting point” by which we measure whether a pro-life law is good. It is not the case that making abortion “less legal than it was before” is good. The measuring stick for goodness is abortion being completely ILLEGAL. That means that anything LESS than complete abolition of abortion is immoral, because it codifies into law the permissibility of murdering some children.

Incremental legislation is wrong. It is inferior in every way to total abolition. It seems to me that those who push for it have no viable plan on how to actually abolish abortion in the context of a supreme court that is giving every indication that it intends to maintain legal abortion. For this reason, we have been working against abortion for almost 50 years to no avail. We are no closer to abolishing abortion today than we were in the 90s. The incremental approach is ultimately a hopeless marathon on a hamster wheel. We pass a law, it gets struck down. We say we need more conservative justices. We elect a conservative president, he nominates conservative justices. Those justices honor “precedent” more than they honor the Constitution, and the pro-life laws still get struck down.

It’s time for a different approach. We need to defy the supreme court. The only way we can do that successfully is if pro-lifers start getting on board.

The problem is that so many pro-lifers have an aversion to abolitionism because those who advocate for it are often inflammatory and abrasive. But they fail to understand why this is. I recognize that abolitionists’ abrasiveness can sometimes be due to pride. That, of course, is wrong and sinful. Many times, however, the abolitionist has already called the pro-lifer to change their ways several times, and the pro-lifer still refuses to do so. So, the abolitionist rebukes them. I think this is appropriate. Advocating against righteous legislation and for faulty legislation that delays abolition merits rebuke.

If every pro-lifer became an abolitionist today, then next legislative session, abortion would be abolished in half the country.

In some States, pro-lifers are the only thing preventing total and immediate abolition of abortion. That’s what’s going on in Oklahoma right now. Planned Parenthood, the ACLU, and the Democrats have no power in Oklahoma. The only ones preventing abortion’s abolition is the pro-life establishment. Oklahomans for Life, in particular, has repeatedly lobbied AGAINST the bill which would abolish abortion.

Get that drilled into your head. Oklahomans for Life is actually our enemy. They are our ENEMY. THAT’S why abolitionists often seem so abrasive. Because there comes a point where you have to draw a line distinguishing your allies from those who are just pretending to be your allies. Just because someone calls themselves pro-life, does not mean they will work with you to abolish abortion. In fact, they may work against you.

We need to draw that line. That’s why I am writing this. It’s why I am distinguishing between “pro-life” and “abolitionist.” I understand that there are many pro-lifers who agree with State nullification and immediate abolition and may recognize the problems with incremental bills. To those pro-lifers, I say: Become an abolitionist! Join us! The sooner every pro-lifer becomes an abolitionist, the sooner abortion will be abolished. So, join the fight early rather than late, so that justice may be established for the preborn as soon as possible. Meet with your State legislator and urge them to propose a bill of abolition. Love your preborn neighbor as yourself, and sacrifice your life for theirs.