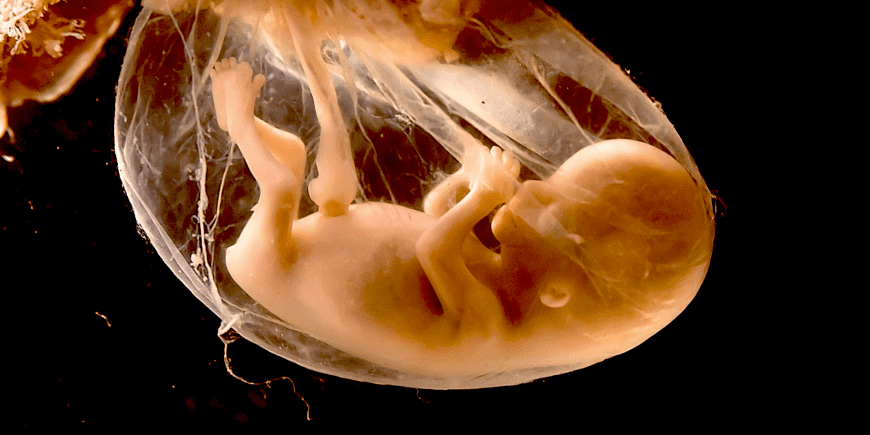 The pro-life argument goes that Christianity is unnecessary to the simple argument against abortion. It’s common among pro-life people to say that their views on abortion are separate from their religion. They don’t want to be seen as theocrats by our secular culture and they desire to work with atheistic and otherwise unbelieving pro-lifers, leading many Christian pro-lifers, and nearly all of the pro-life leaders, to try to put significant distance between their Christianity and their pro-life views and activism.

As an especially egregious example, one prominent pro-life public outreach organization makes its volunteer activists sign a form establishing that they won’t share the Gospel with people unless the person they’re talking to brings up religion first.

The secular pro-life position on the wrongness of intentionally killing innocent human beings is, of course, correct. But it is not sufficient as a refutation of the opposing view. The prevailing worldview of our day, secular humanism holds that humans are simply a more intelligent, less hairy version of an ape (and both are evolved stardust) with no intrinsic moral value. The foundation of the secular humanist position on abortion – that human beings do not have intrinsic moral value – is left untouched by secular pro-life arguments, as these arguments fail to get at the foundation.

This error is in part due to a misidentification of the heart of the abortion debate. It has long been common pro-life thought that once people acknowledged the humanity of the preborn child, they would oppose abortion. This is understandable but is ultimately an outdated and falsified pro-life speculation. The reality – however shocking – is that most abortion supporters have come to acknowledge full-well that a pregnant mother has a human being within her. They simply claim that she has a right to kill that human being because that human being is not created in the image of God and therefore does not have intrinsic moral value that should legally preclude someone from murdering him or her.

As someone who has spent thousands of hours on campuses and other public areas engaging people on the injustice of abortion, I can report that most abortion supporters do not contest the embryological reality that a pregnant woman has a human within them. Most abortion supporters are not the embryology equivalent of a flat-earther, they are the moral equivalent of Genghis Kahn. They think it’s the mother’s right to murder the human being within her (or partially and sometimes fully outside of her) if she wants to, all the while acknowledging the humanity of the victim. Some prominent examples of this:

Salon contributor Mary Elizabeth Williams — “So what if abortion ends life? I believe that life starts at conception. And it’s never stopped me from being pro-choice.” Williams goes on to justify this position with the ideas that “All life is not equal,” and that the preborn human is “A life worth sacrificing.” Interestingly, Williams seems to embrace the fact that her worldview opens the door to the dehumanization of the born as well as the preborn: “My belief that life begins at conception is mine to cling to. And if you believe that it begins at birth, or somewhere around the second trimester, or when the kid finally goes to college, that’s a conversation we can have.”

University of Michigan professor and Planned Parenthood abortionist Lisa Harris — “Given that we actually see the fetus the same way [as people who oppose abortion do], and given that we might actually both agree that there’s violence in [an abortion], ask me why I come to work every day. Let’s just give them all the ‘[it’s] violence,’ ‘it’s a person,’ ‘it’s killing.’ Let’s just give them all that.”

This is not to say that there isn’t value in emphasizing the humanity of the preborn child, there is. But it is to say that doing so is not sufficient. The simple, non-Gospel-centered, secular pro-life argument has nothing firm to offer in response to the primary pro-abortion argument that human beings do not have intrinsic moral value. Again, in fear of being labeled a theocrat and out of a desire for an alliance with atheist and otherwise unbelieving pro-lifers, most pro-lifers refuse to bring the Christian worldview into conflict with the secular humanist worldview.

Further, an even more foundational problem is that an argument against abortion (or any moral claim whatsoever) without reference to the objective standard by which something can adequately be called wrong is an arbitrary argument. It may be correct, but as far as secular pro-life arguments are not grounded in God’s word, they are on a weak philosophical foundation which is as arbitrary as the secular humanist’s foundation.

Evils have to be taken and responded to within their greater context. The importance of this point led to it being a running thread through just about everything theologian and philosopher Francis Shaeffer wrote. In Whatever Happened to the Human Race?, Shaeffer and C. Everett Koop write:

“If people are not made in the image of God, the pessimistic realistic humanist is right: the human race is indeed an abnormal wart on the smooth face of a silent and meaningless universe. In this setting, abortion, infanticide, and euthanasia (including the killing of mentally deranged criminals, the severely handicapped, or the elderly who are an economic burden) are completely logical. Any person can be obliterated for what society at one moment thinks of as its own social or economic good. Without the Bible and without the revelation in Christ (which is only told to us in the Bible) there is nothing to stand between us and our children and the eventual acceptance of the monstrous inhumanities of the age…

“Without the uniqueness and inherent dignity of each human being, no matter how old or young, sick or well, resting on the fact that each person is made in the image of God, there is no sufficient foundation to build on as we resist the loss of humanness in our generation.”

The image of God in man and the incarnation of God in Christ is the firm foundation from which a comprehensive attack on the foundations of the pro-abortion position can be mounted, “comprehensive” being the key word. Contra the idea that we can make a “simple” argument against abortion without bringing the image of God into the discussion is the fact that we’re facing an evil greater than abortion. We’re facing a worldview where the image of God is denied and destroyed en masse. As Schaeffer explains in A Christian Manifesto, we mustn’t approach the battle in piecemeal fashion.

“If we are going to do better [at combatting societal sins] we must stop being experts in only seeing these things in bits and pieces. We have to understand that [the battle] is one total entity [secular humanism] opposed to the other total entity [Christianity]. It concerns truth in regard to final and total reality—not just religious reality, but total reality. And our view of final reality—whether it is material-energy, shaped by impersonal chance, or the living God and Creator—will determine our position on every crucial issue we face today. It will determine our views on the value and dignity of people, the base for the kind of life the individual and society lives, the direction law will take, and whether there will be freedom or some form of authoritarian dominance.”

The image of God in man is the key to the anti-abortion argument, and the incarnation of God in Christ for the purpose of defeating death and redeeming all who believe is the engine of the abolitionist movement. Christians need to fight our battles unashamed of bringing the foundation of our worldview into conflict with the foundation of the secular humanist worldview. The image of God is present in every human being and we must vehemently defend that truth, and be empowered by the saving and redeeming Spirit of God while we’re at it.

Where Mary Elizabeth Williams writes that intrauterine murder is acceptable because “All life is not equal,” we should respond, as William Lloyd Garrison did to the sociopathic evil of his day, “‘So God created man in his own image – male and female he created them.’ This is a death-blow to all claims of superiority, to all charges of inferiority, to all usurpation, to all oppressive dominion.”