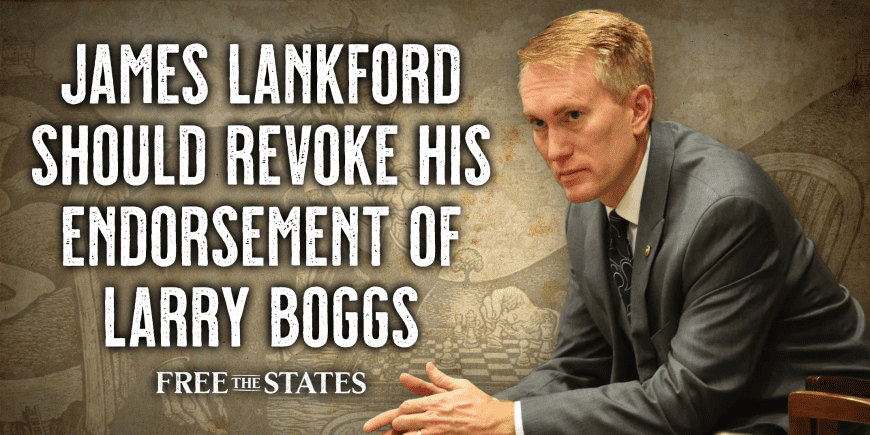 The reality of Larry Boggs’ tenure in the Senate, tragically, bears no semblance to the picture painted by Lankford. If Boggs wanted to “defend the Constitution and Biblical principles” and “protect the dignity and fullness of life from preborn to natural death,” he could have done so. The bill to abolish abortion by standing on God’s word and upholding the principles of the Declaration of Independence and the 10th and 14th amendments of the the U.S. Constitution was in the State Senate once again this year.

Boggs chose not to support that bill, abstaining from the vote to place the Abolition of Abortion in Oklahoma Act on General Order on March 11. Boggs has rejected the many abolitionists in his district who have long pleaded with him to support the abolition of abortion. His campaign is now putting on events for the sole purpose of criticizing the Abolition of Abortion in Oklahoma Act. He has called abolitionist organizations “wolves in sheep’s clothing” on Facebook. Boggs is an anti-abolitionist.

People make mistakes. It is uncertain whether James Lankford’s endorsement of Larry Boggs is an honest oversight or a calculated rejection of abortion’s immediate abolition. What is certain is that Lankford has made a terrible mistake.

Whether intentionally or unintentionally, for Senator Lankford to endorse Boggs is to endorse indefinite submission to the bloody tyranny of Roe v. Wade. It should be self-evident to anyone who rightly views abortion as murder that Senator Lankford has a moral obligation to revoke his endorsement of Larry Boggs. If he does not do so, Lankford will be a delayer of the abolition of abortion and deserves to lose the support of the people of Oklahoma. More importantly, if he does not change course, he will have to answer to the Supreme Judge for this endorsement.