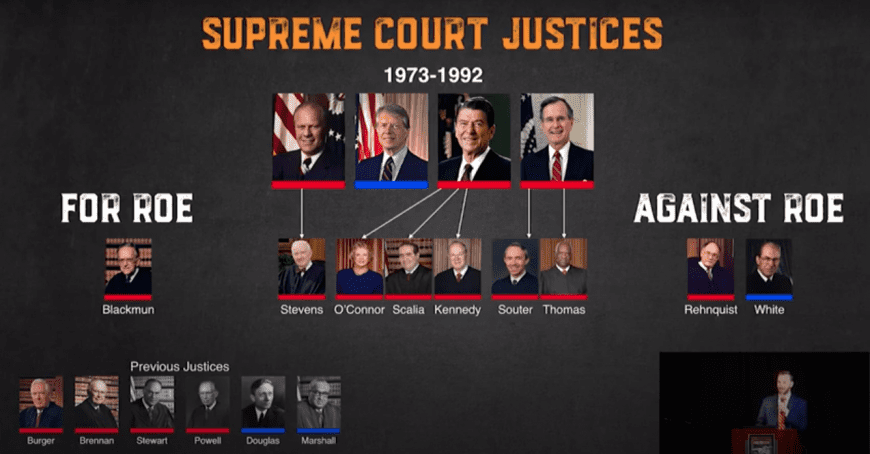 At the Abolition Now Conference, Bradley Pierce, a constitutional attorney and director of Abolish Abortion Texas, presented on the seven aspects of the incremental pro-life strategy and how this seven-pronged strategy has made little to no progress in 47 years.

The pro-life establishment says we need to vote for Republican presidents in order to get a majority of the supreme court who will overturn Roe v. Wade. But did you know that, except for the few months between Scalia’s death and Gorsuch’s appointment, Republicans have held a majority of the supreme court for the entire 47 years since Roe was decided? Did you know that after the Roe decision, the next six justices to step down from the court were all justices who voted in favor of Roe and all six were replaced by Republican presidents? Did you know that in 1992, a supreme court made up of eight Republican appointees and a pro-life democrat upheld legal abortion in full in the Planned Parenthood v. Casey opinion? 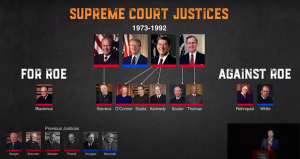 Bradley tracks every supreme court appointment since 1973 to show that the strategy of waiting for the supreme court to overturn Roe is a futile one. There’s no guarantee that the supreme court will ever relinquish the power it usurped in 1973, and at the rate at which even Republican appointees are voting to uphold Roe, it’s not going to happen.

Of the five justices on the current supreme court, only Clarence Thomas has ever indicated that he was fundamentally opposed to the Roe decision. Further, he has written opinions on abortion-related cases in which he explained his opposition to Roe. Neither Samuel Alito nor John Roberts have ever joined Thomas’ opinions. Neither of these two justices whom the pro-life movement fought hard for are willing to say they oppose Roe.

Thomas has actually been voting not to hear abortion-related cases in recent years. The reasonable explanation, Bradley explains, is that Thomas knows that one or more of his Republican-appointed colleagues supports Roe v. Wade.

Roe is not being chipped away. Hundreds of pro-life laws have been passed since 1973, and 37 of them have gone before the supreme court. Yet not one iota of the Roe decision has been rolled back. Roe has been upheld in full all 37 times. And don’t forget, there was a Republican majority supreme court for every single one of those cases.

We must put an end to the unBiblical, obsequious, timid pro-life strategy of incrementalism. We’ve got to stand up to the supreme court and the pro-life establishment to demand abortion’s immediate abolition in defiance of the horrifically evil and openly unconstitutionally Roe v. Wade opinion.

This is an extremely important video. To understand why a different strategy is needed, it’s helpful for people to know that the currently strategy isn’t working. Please watch this video and please share it with your pro-life and abolitionist friends.