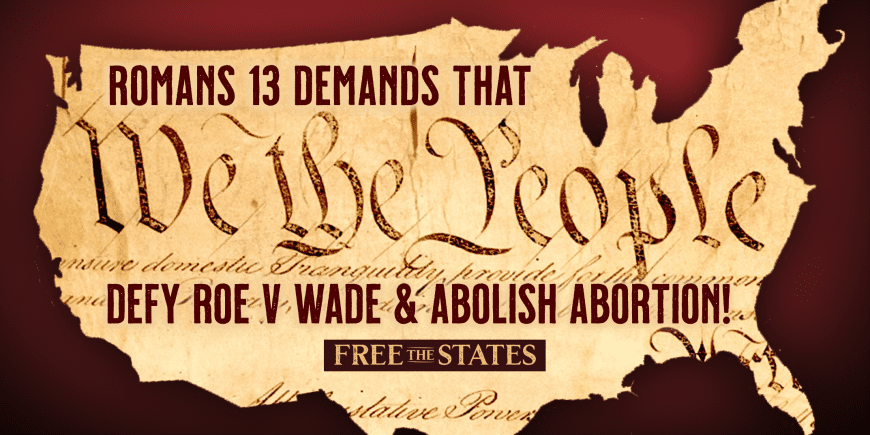 Tim Gillespie is the pastor of Stroud Free Will Baptist Church in Stroud, OK. The following article is a response to Mike Haines, a pastor running for State Senate in District 28 which includes Stroud. Haines wrote an article on his campaign website explaining that he opposes immediately abolishing abortion because disobedience to Roe v. Wade “would not be in line with Romans 13.”

One common retort of many in the Pro-Life Movement to abolitionists is that Romans 13 tells us we can’t defy our “governing authority,” meaning that Roe v. Wade must be followed simply because the Supreme Court said so.  Some may consider the headline of this article “clickbait” or a mischaracterization of the argument; however, it is indeed the practical outcome of their interpretation of Romans 13 and their incremental approach.  In response, I would ask that you consider two things: the greater context of Romans 13 and its context in relation to our form of government.

Romans 13:1 says, “Let every soul be subject to the governing authorities.”  The problem is pro-lifers usually either stop right there or at the end of verse 2.  But let’s look at some other statements made in Romans 13.

Is the continued slaughter of the unborn image-bearer of God an example of good works or an example of terror – good works or evil?  Is the government praising the abortionists or those that seek to stop abortion?  Is the government avenging the evil practice of abortion?  Are they executing wrath upon the abortionist?  Is the continued slaughter of the unborn soothing to your conscience?  God help us if it is!

Just because a group of oligarchs in black robes in Washington, DC or Oklahoma City tell us it is the law of the land, are we to sit back on our pews and forget about the 5,000 plus image-bearers of God that will be slaughtered in the coming year in our state?  That terror does not soothe my conscience.  This is the same reason Christians stood up to black-robed oligarchs over the Dred Scott decision and the Fugitive Slave Act.  They knew slavery and pro-slavery decrees were evil and their Christian conscience dictated they defy evil.

The concept that Roe is the law of the land is another common refrain, and it’s one that shows a lack of understanding of our form of government.  Legislatures make laws.  Courts hand down opinions.  Roe is NOT the law of the land; it is a court’s opinion – and it is wrong.  The Constitution is the law of the land and there is nothing in it that gives the black-robed oligarchs in DC the authority to tell Oklahomans we must embrace terror and evil as we allow the continued slaughter of our unborn.

Perhaps one of the most critical things that must be understood in order to properly apply Romans 13 to our situation is that the President, Governor, legislative bodies and courts are NOT the governing authority in this country or the states.  We are not a democracy, monarchy, or a dictatorship.  Also, we were never meant to be an oligarchy even though that is, in effect, how our nation is being operated when nine black-robed judges are allowed to be the final arbiter of every constitutional question.

Clearly, what is happening in our nation is contrary to the Constitution.  We are a constitutional republic.  Our government is of the people, by the people, and for the people.  We the people hire representatives and bureaucrats to conduct our political business in our stead and we have established a constitution to govern their actions.  Every so often, we hold elections as a means to hire, retain, or fire those elected representatives.  They are NOT the government.  We are.  They are our employees and it is our responsibility to ensure that they are respecting and subjecting their votes and actions to OUR will.  Unfortunately, we are failing miserably in that duty and have allowed politicians, judges, and bureaucrats to become rulers rather than representatives.  That needs to change.

There is no provision in the US Constitution that allows the US Supreme Court to tell any state they must allow the murder of the unborn.  They have overstepped the bounds of their authority and the bounds of righteousness.  The Roe opinion is contrary to God’s righteousness and to the US Constitution.  Roe is an opinion; it is not law.  It is an unjust and unconstitutional opinion and, therefore, it is non-binding and not only should, but must be defied.

Perhaps those that embrace the pro-life movement’s Romans 13 argument just haven’t taken the time to question it.  Perhaps they have and, with nothing but good intentions, still believe it is the right interpretation.  Perhaps they have but decided it is just easier to remain complacent.  Perhaps they know better but are profiting from the continued stalling strategy in some way.  Different people have different reasons, I suppose.  But the result is the same: the continued slaughter of the unborn image-bearer of God on the altar of convenience and hedonism.

Furthermore, the incremental approach of the pro-life movement, along with their refusal to entertain the notion of nullification, is simply not sound logically.  They say they want to end abortion, but their strategy can never accomplish the stated end goal.  Incrementalism will never cause Roe to be overturned.  It will only be overturned when a state stands up to the oligarchs and defies Roe, forcing SCOTUS to revisit the issue.  They will never revisit it otherwise.  That said, that isn’t really even the point of abolitionism because if the court were to uphold Roe, defiance would still be the only right and Godly reaction.

Abolition requires defiance.  That may make some people – including some pastors – uncomfortable.  Human nature is to go along to get along.  As Christians, though, we are called to conquer our flesh and  stand up and be counted.  We are called to speak for the speechless.  Occasionally, that may require overturning a table or two.

God ordained civil government for the good of mankind.  But evil politicians are corrupting the halls of government.  It is time we the people, the governing authority in this country, demand better from our employees.  In November, they need to be reminded of what Romans 13 says.