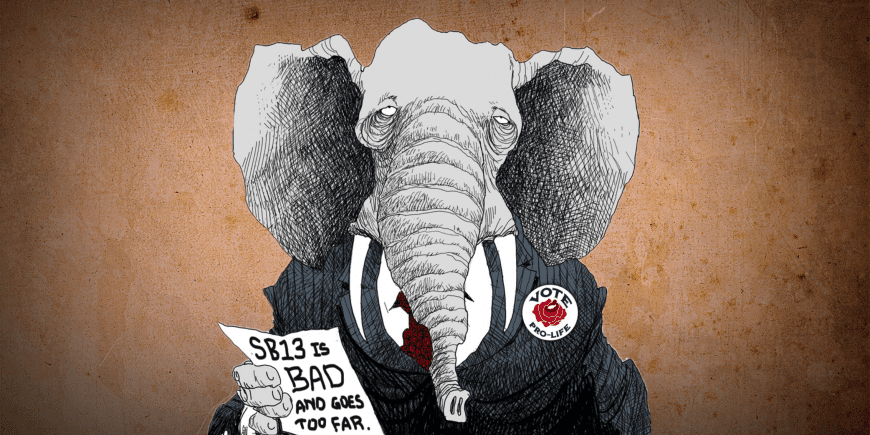 At the Pittsburg County Republican Committee meeting on February 28, a resolution opposing SB13 was filed. Thankfully, it was voted down. Further, a resolution in favor of making Pittsburg County a sanctuary county for preborn children did pass. But this pro-life resolution provides a look into the thinking of the pro-life establishment and their opposition to abolishing abortion. 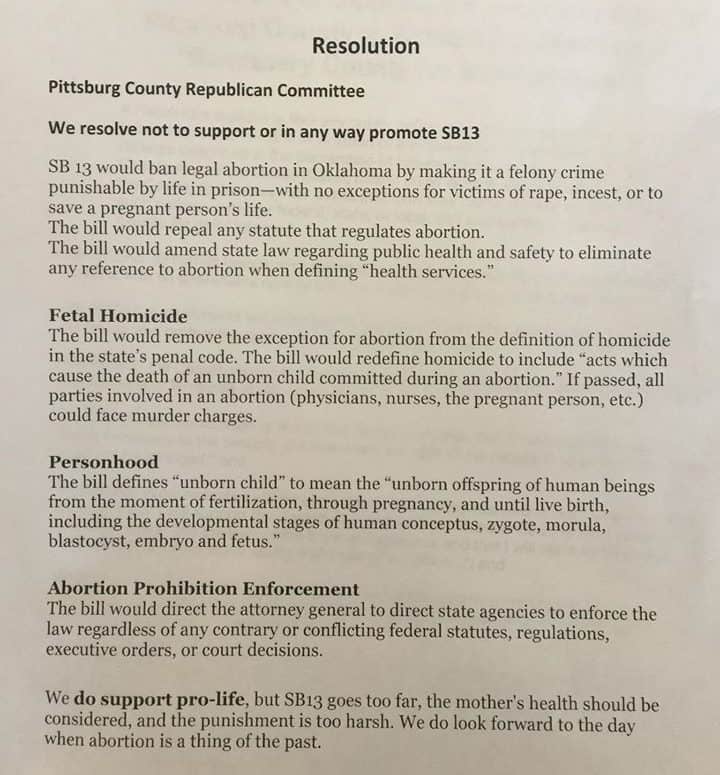 The author of the resolution opposes SB13 for seven reasons.

Abolitionism is about upholding justice for the fatherless. No one is more fatherless than the child conceived in rape. This is probably the most vulnerable group of human beings on the planet. A law which allows for abortion in this situation is an atrociously evil law which makes the fatherless prey (See Isaiah 1:16-17; 10:1-2). The law must prohibit the execution of the child for the crime of his or her father. The pro-life author of the resolution appears to want those children to remain vulnerable to being legally murdered. The same goes for babies conceived in incest. These children could have disabilities because of the sins committed by their parents, but the idea that it should be legal to murder them is unacceptable.

As for the life of the mother, SB13 specifies that the doctor cannot be held liable for murder if they did everything they could to save both lives. It does not and should not have a blanket life of the mother exception. That would be a loop hole that would be abused severely. Doctors are supposed to be healers, not killers, and SB13 specifies that they must exhaust all options at their disposal to save both human beings in cases of pregnancy complications demanding triage.

2) “[SB13] would repeal any statute that regulates abortion.”

All of these laws passed by pro-life politicians and lobbyists regulate where babies can be murdered, how they can be murdered, by whom they can be murdered, and the licensing needed  to murder them. Such laws explicitly contradict SB13 which abolishes abortion as murder. Abortion cannot be abolished while there are still laws on the books saying abortion is legal as long as you jump through pro-life hoops. They have to be repealed. SB13 repeals them.

3) “[SB13] would amend state law regarding public health and safety to eliminate any reference to abortion when defining ‘health services.'”

Again, this is absolutely true. Abortion is not health care. It’s murder. Abortion must be taken out of the health codes and put into the criminal homicide codes. The pro-life author of the resolution appears to want abortion to continue to be legislated as if it were health care.

4) “[SB13] would redefine homicide to include ‘acts which cause the death of an unborn child committed during an abortion.’ If passed all parties involved in an abortion (physicians, nurses, the person, etc.) could face murder charges.”

The Texas abortion statutes in question in Roe gave automatic immunity to the mother in all cases. Justice Blackmun, author of the Roe ruling, wrote in footnote 54 of the decision that if Texas really believed preborn human beings were persons deserving of legal protection, the state would legally penalize those who murder them to the same degree as those who murder born persons. Another enormous problem with providing automatic immunity to the parents who murder their preborn child is the fact that it creates a right to self-induced abortion, a practice which is increasingly common as abortion pill technology advances. To write a law outlawing abortion but giving automatic immunity to the parents means that the mother is free to induce her own abortion. SB13 does not fail to provide equal protection to preborn humans and therefore does not legalize self-induced abortion.

5) “[SB13] defines ‘unborn child’ to mean the ‘unborn offspring of a human being from the moment of fertilization, though pregnancy, and until live birth, including the developmental stages of human conceptus, zygote, morula, blastocyst, embryo, and fetus.”

I don’t know what to say about this one. That the author of the resolution apparently thinks it’s bad that SB13 defines ‘unborn child’ as a human being from conception is pretty telling about where they’re at.

6) “[SB13] would direct the attorney general to direct state agencies to enforce the law regardless of any contrary or conflicting federal statutes, regulations, executive orders, or court decisions.”

Roe is an evil, unconstitutional supreme court opinion ordering the states to allow mass murder within their jurisdictions. An abolition bill recognizes that the courts have no rightful authority to legalize murder. Court opinions legalizing murder are null and void by their nature and will be treated as such upon the passage and enforcement of an abolition bill. In addition to a magistrate’s duty to uphold the Constitution in the face of judicial tyranny, all men have a transcendent, immutable moral obligation to disregard an order from a superior to allow mass murder, which is exactly what Roe is. Lower magistrates must interpose themselves between the victims of abortion and any higher magistrate who would deprive preborn human beings of the right to life.

Specific to this case, state executives, legislators, and judges are the lower magistrates who must defy the tyrannical federal judiciary. An abolition bill includes language specifying that it will be enforced regardless of any contrary federal law, executive order, or court opinion. Submitting to the supreme court’s order to allow mass murder is cowardly and iniquitous, and absent language nullifying Roe a bill purporting to outlaw abortion will not be enforced. As an example of a bill that lacks language nullifying Roe, in 2019, Alabama passed a court-submissive bill establishing that it’s illegal for an abortionist to perform abortion. Yet Planned Parenthood is so confident the court will not allow the law that they broke ground on a new megacenter in Birmingham a few months after the bill passed. SB13 does not submit to Roe or any other government edict purporting to legalize abortion.

Here’s the kicker. This person is a pro-lifer, through and through, who pays lip service to the idea that abortion is bad. This resolution is being introduced at a Republican Committee Meeting. Like Greg Treat and Kim David and the Republican establishment, the resolution’s author supports pro-life regulations on abortion but opposes actually establishing justice for preborn human beings. And that’s the fruit of a strategy of regulating abortion – many pro-lifers are now comfortable with regulating murder and uncomfortable with abolishing it. We’ve got to leave behind entirely this mindset, this political strategy of regulating abortion. Abortion must be utterly abolished.