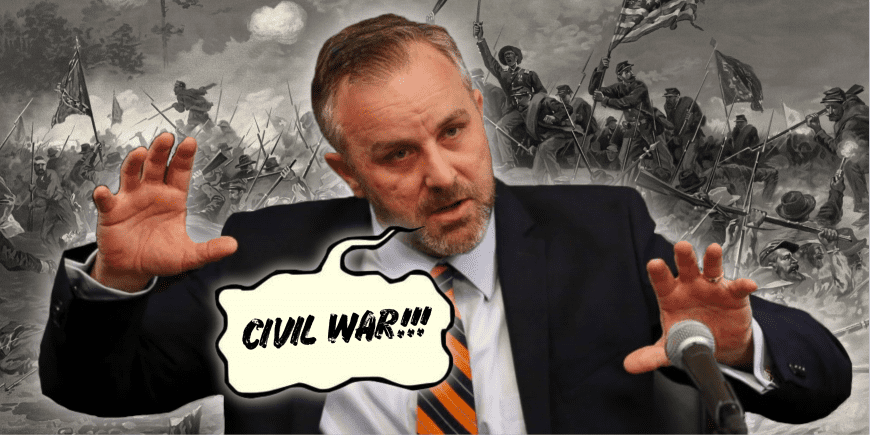 Oklahoma State Senate Pro Tem Greg Treat has been the primary opposition to the Abolition of Abortion in Oklahoma Act over the past two legislative sessions. Since the Abolition Day rally last year, Treat has gone to the media to denounce SB13, authored bills designed to be substitutes for SB13, and instructed former Senator Jason Smalley and Senator Greg McCortney not to hear SB13.

In 2019, Treat’s anti-abolition talking point was that we can’t just defy Roe v. Wade – that nullification is an evil practice. “[Nullification] is not the heroes of the stories, it’s the villains of the stories,” Treat said during a 2019 Senate Committee Hearing. “To wrap yourself in a nullification banner is to be on the wrong side of history.”

Last week, abolitionists covered Treat’s district with fifteen thousand flyers showing that he doesn’t actually believe what he said last year regarding nullification, because Treat himself has a history as a nullifier. In 2018, he voted in favor of putting the decriminalization of marijuana on the ballot, a violation of the federal Controlled Substances Act and the supreme court’s decision in Gonzales v. Raich. In 2016, he not only voted in favor of but was the primary sponsor of SB1379 which nullified federal EPA regulations. 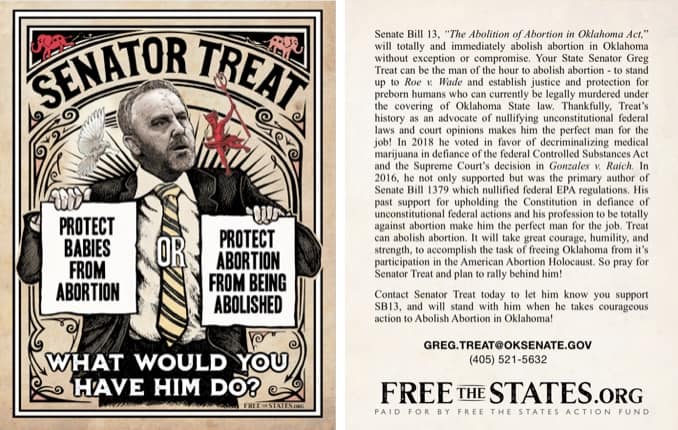 With his hypocrisy on the nullification matter exposed, Treat is no longer able to attack abolition on the grounds that nullification is evil. So he was forced to move on to a different line of attack on abolitionism and SB13. Unfortunately, this year’s attack is much more severe and disingenuous.

To the Norman Transcript last week, Treat said “I still am of the mind that [SB13 is] fatally flawed, and I believe that in large part that’s a bill to secede from the union more than it is to save lives.”

He similarly told The Oklahoman, “I believe Senate Bill 13 is much more focused on quasi-secession rather than saving human life.”

There are many people and organizations behind the Abolition of Abortion in Oklahoma Act. Free the States, The Ekklesia of Oklahoma, and Oklahomans United for Life are three political-educational organizations which support SB13. Two Christian denominations, the Oklahoma Association of Free Will Baptists and Oklahoma Baptists (Southern Baptist Convention), both passed resolutions in support of SB13 in the past nine months. The Oklahoma State Republican Party amended their platform to call for abortion’s total and immediate abolition last year as well. For the Abolition Day rally on Tuesday, February 11th, between two and three thousand Oklahomans took time off work to show up at the State Capitol to support SB13. Treat seems to want you to believe that the motivation of all the work being done by all these various people and organizations is a desire to secede from the union rather than love for our preborn neighbors, and that we merely pretend to love our preborn neighbors while using them as a political tool to accomplish our actual objective.

There is as much legitimacy to Treat’s slander this year as there was to his anti-nullification talking points
last year; which is to say there is no legitimacy to Treat’s slander. There is nothing in SB13 that could possibly lead a reasonable person to believe that it’s a bill of secession. It is a bill of nullification. Section 33 establishes that “Any federal statute, regulation, executive order or court decision which purports to supersede, stay or overrule this Act is in violation of the Constitution of the State of Oklahoma and the Constitution of the United States of America and is therefore void.” This is no more a call to secession than Treat’s SB1379 or the decriminalization of medical marijuana were examples of secession. And if those issues were worth defying federal overreach over, how much moreso is this issue worth taking a stand?

Politicians, on the other hand, do use abortion to advance an unrelated political agenda. “The life issue” is a means to an end for the Republican pro-life establishment. They pretend like they’re doing something about abortion to appease their constituents and get reelected but show no desire to actually put an end to the slaughter. To avoid doing the hard thing that takes courage, Treat consistently perpetuates disinformation about SB13, about Oklahoma abolitionists, and even about his own positions (like being against nullification). Why Treat does this, no one can say for certain, but the consequence of it is that the blood continues to flow in Oklahoma. We pray for the softening of Treat’s heart and will have nothing but praise for him should he do what is right. 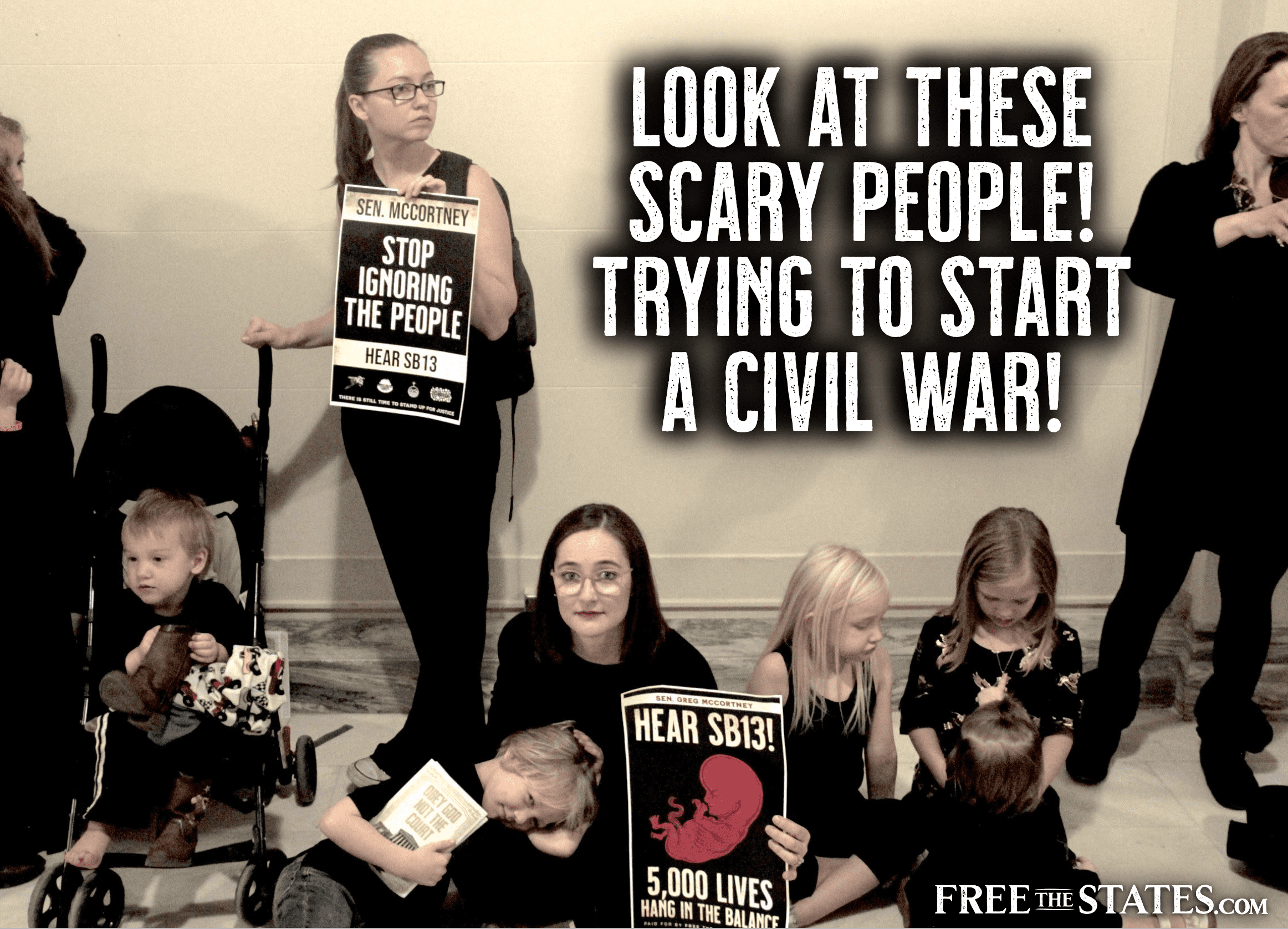 But as for the accusations, not a single staff or board member of Free the States has any objective in mind other than establishing justice for those who are currently being murdered under the cover of Oklahoma State Law, and doing so in the name of and for the glory of Jesus Christ. This is the cause for which we toil and we will continue in this work until the day justice is established. Slander will not deter us, nor will it deter our fellow brothers and sisters in Christ at the organizations we work with, nor the thousands of abolitionists across the state.

1 Peter 3:15-16 — “[I]n your hearts honor Christ the Lord as holy, always being prepared to make a defense to anyone who asks you for a reason for the hope that is in you; yet do it with gentleness and respect, having a good conscience, so that, when you are slandered, those who revile your good behavior in Christ may be put to shame.”