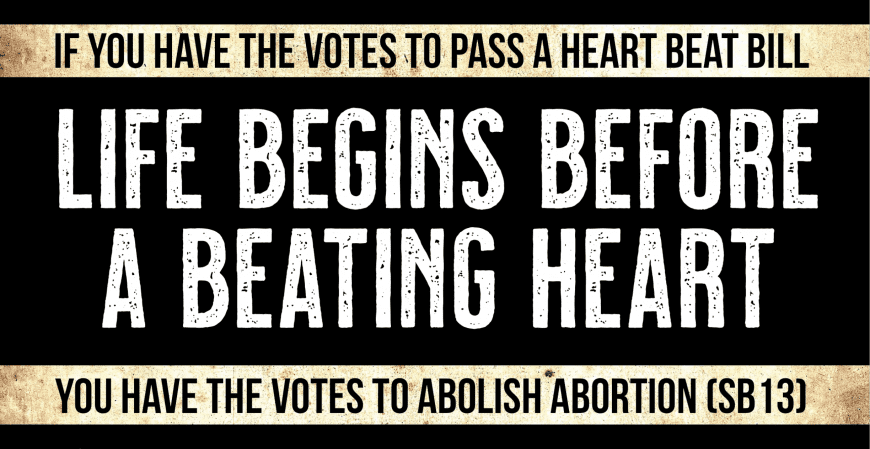 What you’ve done instead is you’ve begun the process of killing SB13 and you’ve offered a lesser substitute bill in its place. The Christians of Oklahoma will not be appeased or fooled by it.

Compromise with abortion is iniquitous, but it’s also political folly. As demonstrated by the various organizations’ platform changes and the enormous crowd last Tuesday, the paradigm has shifted and you no longer will receive praise for compromising with abortion. The Christians of Oklahoma will boo you for passing SB1859, and they will be just in so doing. SB1859 is being used as a substitute for doing what is right. It is the excuse being used to not establish justice.

In addition to it being used as a substitute for SB13, SB1859 should be opposed because:

“The life issue” is not a game. Abortion is murder. More than 5,000 image bearers of God are murdered by abortion every year under the cover of Oklahoma State law, and this will continue to be the case for as long as this state government delays abolition. There are some in this legislative body who are intentionally supporting incremental compromise bills as part of a concerted effort to appease Oklahoma Christians while these very same people are the ones preventing abolition. There are also some who have good intentions but errantly think we should try to make compromises where we can make them. We plead to those with good intentions to understand that the practical function of bills like SB1859 is to delay abolition and enable those who oppose abolishing abortion, and we plead to those intentionally playing political games with the lives of preborn children to turn from that and wield their authority justly going forward. We will not turn anyone who does the right thing away because of past differences. We will honor you if you do what is right and actions taken previously will be water under the bridge.

The first step toward the bloodshed stopping is this substitute bill being voted down. SB1859 is the unjust, inadequate substitute being put forward instead of the only bill that establishes justice for preborn human beings. This is no longer lost on the Christians of Oklahoma. They are awake to what is happening. They will not be appeased or fooled by incremental compromises bills which will never go into effect and which have the effect of delaying abolition.

Senate Bill 1859 will be opposed by the Christians of Oklahoma. You should oppose it as well. Please vote against SB1859 and give SB13 a hearing.