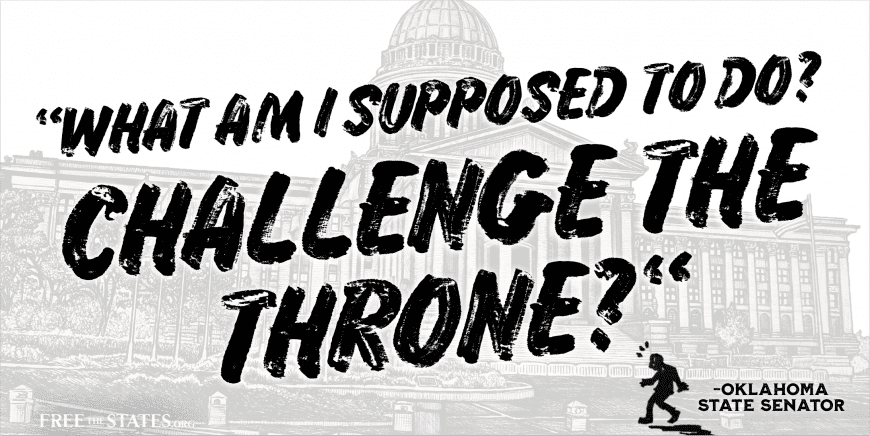 Last Monday, an abolitionist met with an Oklahoma State Senator regarding SB13, the Abolition of Abortion in Oklahoma Act. For the sake of the Senator who would likely face punishment if Senate leaders knew what he said, we will not reveal his name.

The meeting was very cordial but turned emotional when the abolitionist broke into tears. She was exasperated and begged the Senator to take action to abolish abortion. Effected by her emotion, the Senator asked, “What am I supposed to do? Challenge the throne?”

If you’ve ever wondered how huge Republican majorities, both nationally and in the states, so rarely accomplish what we send them there to accomplish like shrinking government or establishing justice for preborn children, this is how it happens. Moderate and even left-leaning Republicans rise to positions of leadership and consolidate their own power which they use to squash conservative bills and legislators. Senator Joseph Silk has been severely censured by Senate Pro Tem Greg Treat for his support of immediately abolishing abortion. Last year, Silk’s Vice Chair roles were stripped from him.

This is the type of oppressive power Treat and Senate Majority Leader Kim David exert over the rest of the Republican Senators who feel as though they are under the authority of a king and queen and that they will be punished if they step out of line.

The effect of this is that the blood of the innocents continues to flow in Oklahoma. And if Republican Senators don’t muster the courage to stand up to Senate royalty and the pro-life establishment, the blood could continue to flow indefinitely.