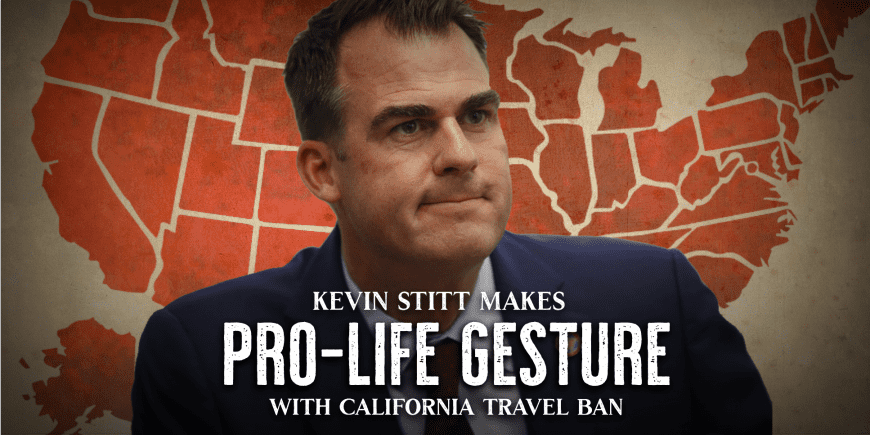 “California and its elected officials over the past few years have banned travel to the State of Oklahoma in an effort to politically threaten and intimidate Oklahomans for their personal values. Enough is enough. If California’s elected officials don’t want public employees traveling to Oklahoma, I am eager to return the gesture on behalf of Oklahoma’s pro-life stance. I am proud to be Governor of a state that fights for the most vulnerable among us, the unborn.”

If you live in Oklahoma, you’ve seen a lot of pro-life gestures. In fact, the Oklahoma State House has made perhaps the best possible gesture when they passed House Resolution 1004 in 2017 calling abortion murder and for it to be treated as such. That was a fantastic gesture.

But the problem with gestures is that they don’t actually change anything. They’re great if you’re a politician and you want your constituents to think you’re doing something good without doing anything of substance or impact.

There’ve been plenty of pro-life gestures over the years and very little action taken to actually stop the mass murder of preborn human beings. If Governor Stitt wants to “fight for the most vulnerable among us, the unborn,” there is much fighting that needs to be done.

Governor Stitt is morally and Constitutionally obligated to abolish abortion. He needs to do that. He needs to shut down the killing centers and use his influence to help pass the Abolition of Abortion in Oklahoma Act. If he doesn’t, then abortion will remain legal in Oklahoma just like it is in California.

When we are impressed by mere gestures, legislators and executives don’t feel the pressure to do things of value. We have to hold Governor Stitt and the State Legislature to a higher standard. We have to demand they actually stop the killing. A poignant example of the importance of holding a hard line is the 2019 legislative session.

Tony Lauinger wants us to be excited about the "highly successful Oklahoma legislative session" for pro-life bills. But these new laws are not victories. They're defeats. James explains why.

Posted by Free the States on Wednesday, August 7, 2019

The fact that there were still people in Oklahoma who celebrated the three compromise pro-life bills in 2019 is what allowed pro-life Republican Senator Greg Treat to get away with killing the Abolition of Abortion in Oklahoma Act.

Our pro-life politicians want to give gestures and orchestrate compromises and have people give them roses for it. The day when a critical mass of Oklahomans are no longer impressed by gestures and compromises and demand abortion’s abolition is the day the killing will stop. Until then, we can’t look down our noses at California. We’re just as bad.