A document was published last week by Texas Right to Life (TRTL) outlining their legal strategy for the upcoming sessions. There are lots of pro-life documents and articles out there which entail bad strategy, but it’s very important that we respond to this one in particular because the article is a transparent attempt to blur the distinction between pro-life and abolitionist ideas.

Based on their choice of words as well as the content of the document itself, it’s apparent that it was written in response to the massive shows of support for the Abolition of Abortion in Texas Act in recent months, as well as the growth of abolitionism in Texas generally.

Including the article title, the word “abolition” and its variants were used twelve times. A search for “abolish” and “abolition” turn up no other articles at their site which uses the a-word in reference to the eradicating of abortion from society. Texas Right to Life is not an abolitionist organization and their use of “abolition” in this article is a deceptive attempt to try to blur the distinctions between the pro-life movement and the abolitionist movement.

Other than the usage of the a-word, the article contains other language which significantly departs from the language utilized by TRTL and the pro-life movement. It speaks of the “divine vengeance upon our land” which is coming if we don’t abolish abortion. There isn’t another document put out by a National Right to Life-affiliated organization ever written that uses this sort of language. This sort of call for repentance and treating abortion as the horror it is is explicitly abolitionist in nature and is antithetical to the messaging of National Right to Life.

Further even than using abolitionist terminology, in the article’s fourth paragraph, TRTL purports to forsake incrementalism for a “bolder” strategy: “We at Texas Right to Life have always been patient, strategic incrementalists, but after 45 years of waiting, we must be bolder and clearer than ever to take the next steps in the battle.”

However, rather than embracing abolitionism, TRTL, in following paragraphs, lays out an explicitly incrementalist agenda.

“Yes—through a patient, logical, methodical, and legally laid framework on which courts build the case to weaken, dismantle, and reverse Roe. In order to reach abolition, two measures must first be legislatively and judicially addressed. Texas Right to Life is committed to leading the movement in Texas by passing and legally defending three sequential Pro-Life policies:

1. First PreNDA: Abolish all discriminatory abortions and the remaining late-term abortions in Texas via the Preborn NonDiscrimination Act (PreNDA);

2. Then the Heartbeat Bill: Abolish elective abortions after the preborn child’s heartbeat is detectable; and

By using abolitionist language and then pretending to forsake incrementalism by embracing the same incrementalist strategy they’ve always pursued, there can be no question that TRTL is attempting to blur the distinctions between abolitionist and pro-life ideas in the minds of those who aren’t aware of the differences.

The paragraph directly following TRTL’s list of their three legislative priorities is as follows: “Texas Right to Life fully endorses PreNDA, a Heartbeat Bill, and an Abolition Bill, recognizing that the greatest possibility of success lies in the proper sequential and logical order. Each piece is crucial in abolishing abortion in Texas, and all three policies could be passed in one carefully drafted bill.”

Two things need addressing here. First is the lack of legal understanding that is nothing short of stunning. Texas Right to Life believes we can pass a bill that 1) legalizes the murder of babies for any reason other than the fact that they have down syndrome, 2) that legalizes the murder of babies who don’t yet have a detectable heartbeat, and 3) that abolishes abortion all within one bill.

The second thing that needs addressing is the dogmatic assertion that abortion must be fought in this sequential order. There’s absolutely no legitimate reason to think this would be the case other than the fact that they’re claiming it. This assertion is a common one among pro-lifers, but there’s never any reason given other than “it’s just the way we’ve always done it.”

To their credit, TRTL provides… something… to back up the assertion. That something is far from legitimate, however.

“Texas must enforce and defend PreNDA first so as to force the Supreme Court of the United States (SCOTUS) to build a court record affirming the preborn child’s humanity. Once this noteworthy, yet intermediate goal is achieved, the state can then enact broader protections for more preborn children (those with detectable heartbeats) and then achieve our primary goal of saving all preborn children.”

For a couple reasons, this is way off the mark. First, the court’s opinions must be ignored. It’s a moral sin to abide by an order from the Supreme Court or anyone else to allow mass murder. Roe must be immediately ignored, abortion must be immediately abolished, and the right to life must be immediately upheld. But even from TRTL’s position of fighting abortion from a position of unconditional submission to the Supreme Court’s bloodthirsty tyranny, there’s absolutely no reason the court would need to uphold the PreNDA and Heartbeat Bills before it would be able to uphold a bill of abolition. There’s no reason to think that’s the case other than “it’s the way we’ve always done it.”

In fact, this assertion that Roe must be overturned in piecemeal fashion is exactly opposite of the reailty. In footnote 54 of the Roe decision, Roe author Justice Harry Blackmun wrote that an intermediate position between abortion being murder and it not being murder can’t possibly be allowed by the court.

Blackmun is explaining that if the State of Texas actually believed that the preborn human was a person, why didn’t they treat the murder of that preborn human like the murder of any other person. Texas treating abortion as an intermediate-level offense that isn’t actually murder betrayed the fact that Texas didn’t actually think the preborn child was a person. Strategies to abolish abortion by starting with intermediate goals are and have always been doomed to failure not because they don’t go far enough but because they make affirmative and arbitrary assertions about who is and isn’t a human being deserving of protection. Abortion must be abolished in entirety because it’s murder or else any effort to prevent can’t be taken seriously, because if abortion isn’t murder, then why would the courts allow some intermediate banning of it? If we continue to cede our foundation to the pro-abortion side, as all incremental legislation does, we are going to continue to lose.

Stop taking the pro-life leaders’ word for it and stop fighting abortion the way it’s always been fought. Demand abortion’s immediate and total abolition and rebuke any deceptive effort to blur the distinctions between the pro-life and abolitionist movements. 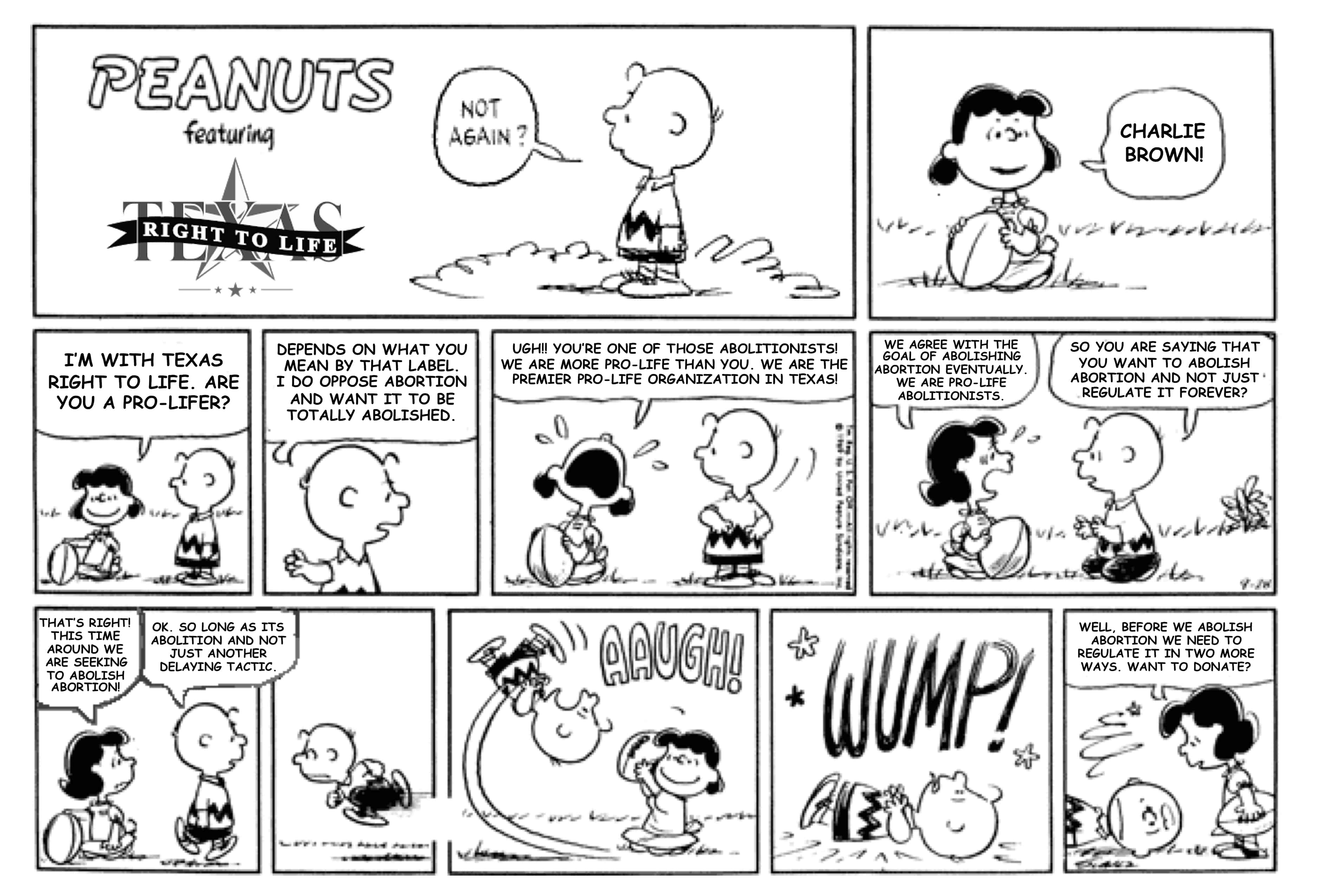