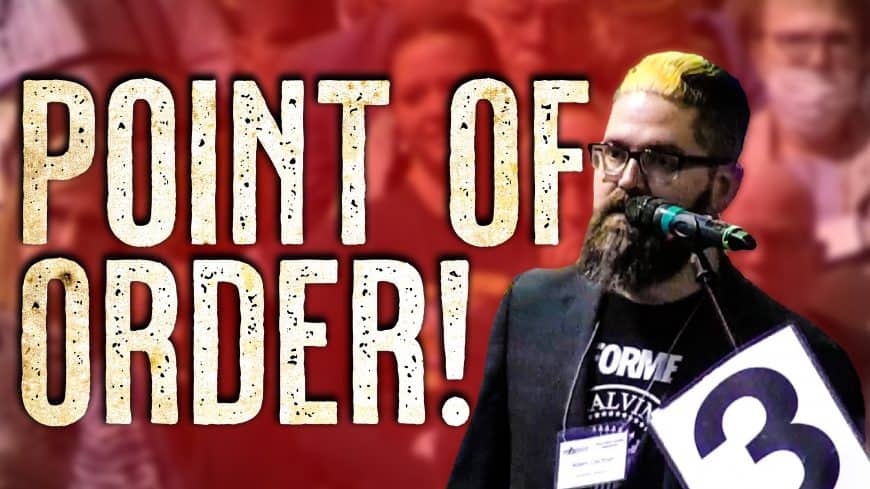 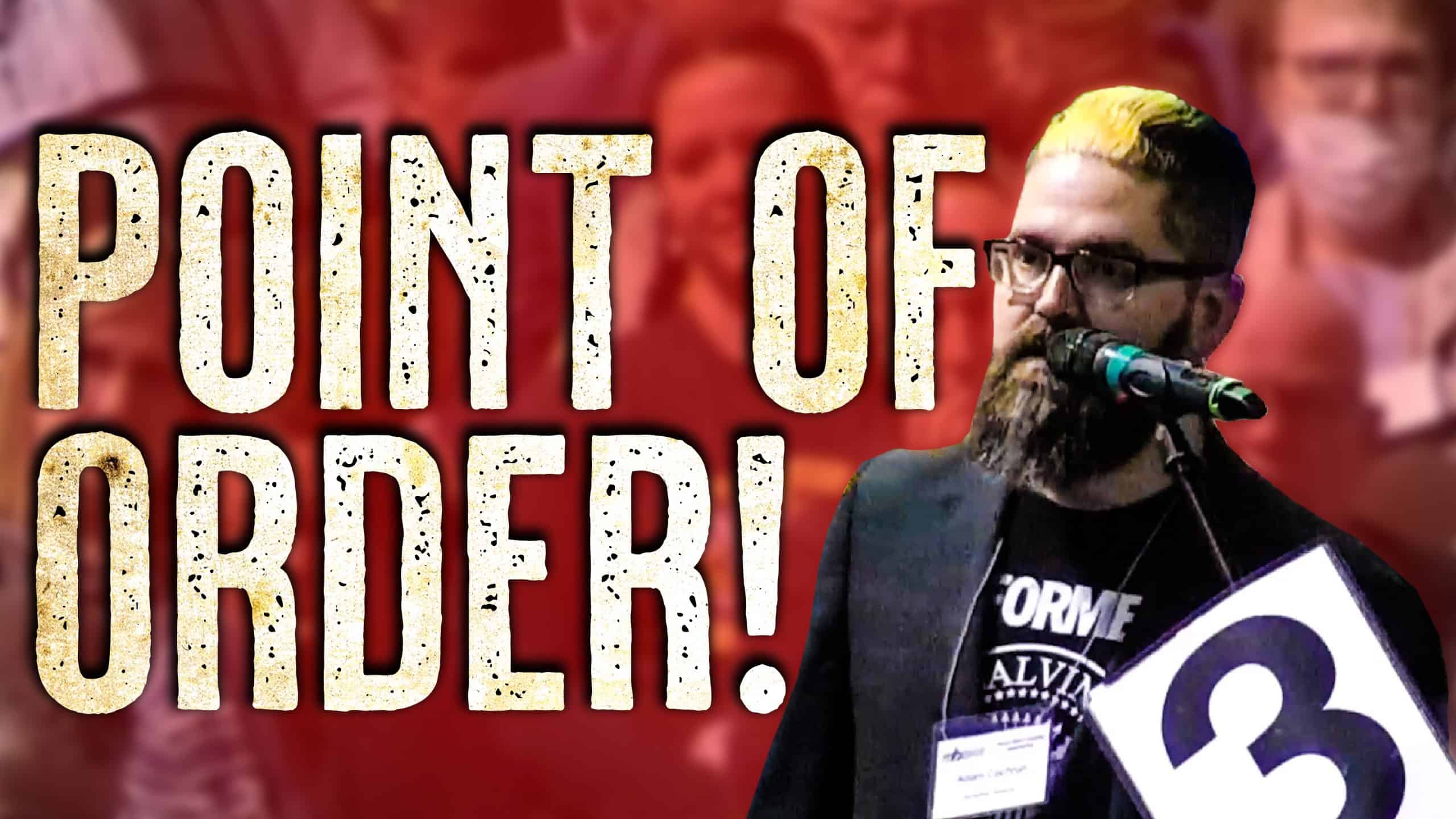 At the 2021 Missouri Baptist annual meeting, my motion to bring the Resolution on Abolishing Abortion to the floor for debate was, at best, negligently overlooked. The resolutions committee was supposed to present my motion (as well as one other motion) at the end of their resolutions report, but instead, left the stage after presenting their own five resolutions. Had I not called for a point of order, they would have killed two valid motions by simply walking away from them.

Dealing with resolutions can be fiasco, and in our finitude of energy and attention span — or just plain being human — things can slip. We should be gracious regarding the committee’s motives, and thankful for the admission that they had done wrong and their repentance that they showed by having the committee come back out so the convention could consider my motion. Even so, “point of order” may not have been strong enough. Given their opposition to abolitionism and their hopefully accidental error that would have unlawfully tabled the discussion on abolitionism, perhaps it would have been appropriate to say to Missouri Baptist leadership and Pastor/State Representative Doug Richey, “Please do your job;” or better still — because it’s an apostolic command — “Walk in a manner worthy of the calling to which you have been called.”

Eph. 4:1 is indeed an appropriate admonition because Ephesians 3 teaches us that the Holy Spirit dwells within us! Must those indwelt with God’s very Spirit call for justice in regards to child sacrifice, or should they celebrate the gradual regulation of child sacrifice? Those who argued against and/or overlooked a fully biblical and just resolution on the abolition of abortion must consider their duty as a Christian and the duty of associations like Missouri Baptists. We are not to call our magistrates to do what they tell us is reasonable and pragmatic. We are called to point them to God’s word: to repentance and faith in Christ, and to the establishment of justice as God defines it.

To be clear, President Jon Nelson and the Resolutions Committee made things right, and it is forgiven. Though, I must address another matter on which I disagree with President Nelson: the subject of “name dropping” fellow Missouri Baptist brothers and sisters in the course of discussing publicly relevant and accessible information. It is sometimes appropriate and necessary to name names if the behavior of the public figure being brought to light is both true and sinful to the point of requiring public rebuke. Senator Bob Onder gutting Senator Mike Moon’s bill to abolish abortion undoubtedly falls into this category. The point is actually moot as Onder is not actually Southern Baptist but Roman Catholic (Moon is a Southern Baptist). But even if Onder were MBC, he must be called out for what he did, with any such rebuke being desirous of reconciliation and repentance.

I can’t say any of this about my fellow Missouri Baptists unless my desired outcome in so doing is reconciliation. When it comes to Richey and anyone else who opposes abolitionism, I would love to be reconciled by the standard that God commands as understood through his Law and Gospel. I don’t want to be like Jonah. I want to marvel in awe when God grants repentance.

With that said, I will again cry “Point of Order!” Representative Doug Richey: “walk in a manner worthy of the calling to which you have been called!”

After the resolution was voted down because of your argumentation, I asked you three questions to which you gave a correct answer, a sadly honest answer, and a doozy of an answer that blatantly disregards plain reason. First, you correctly affirmed that Roe v. Wade is not the law of the land. Second, you stated that you treat it as if it is “because others do.” These first two answers demonstrate that you are following the multitude to do evil (Exodus 23:2) rather than standing firmly on truth that is unpopular among the Missouri General Assembly.

Third, you did not reason correctly when you denied that drawing an arbitrary line regarding when, where, and how preborn image bearers can and cannot be legally murdered implies government permission to abortion. It is undeniable that incremental pro-life legislation instructs abortionists and abortion-minded parents when, where, why, and how they may murder preborn children. You may argue that telling Missourians when, where, why, and how to murder children is a good thing if it reduces abortion numbers, but you cannot argue that you are not writing injustice into law. Doing so is a plain denial of reason, and the end of a good-faith conversation.

Sadly, this is what secularism has done to Doug’s thinking, but Doug is not alone. This sort of pragmatic, man-centered thinking has been leaking into mainstream Christanity since at least the enlightenment. Therefore, I must say, I am not filled with hatred for Doug and other politicians who are failing to establish justice for preborn children. I pity them. I pity them because they have believed a lie so long that they don’t see the repentance that is so blatantly needed. Instead they wince at the suggestion and appeal to pro-life pride as they argue against abolitionism. They appeal to versions of the sunken cost fallacy: “We’ve been fighting this way for so long!” they cry. “We’ve shed blood, sweat, and tears abolitionists want us to repent?” Yes. Babies are murdered in accordance with our pro-life laws. Repent with us.

Returning to Richey’s testimony against the resolution, the argument that deluded the messengers of both the 2020 and 2021 annual meetings is the idea that the Resolution on Abolishing Abortion will restrict him from signing incrementalist bills. This is a red herring, or whatever shiny thing Doug thinks would distract his audience who relies on his expertise from asking the crucial question: “Why do you need to support incrementalist bills when you can simply stand with other abolitionists in the Missouri House and Senate to abolish abortion?” The only thing keeping the state government from establishing justice for all preborn children is the fact that the pro-life politicians are consumed with producing a never-ending stream of incrementalist bills that “save some.”

This is why I and other abolitionists wanted to strike from Resolution 5, had time permitted, the irrelevant call for the end of taxpayer funded abortion, which does not belong in a truly abolitionist document. Some demands are too weak for a given evil, and we must not demand the mere defunding, but the total abolition, of the murder of our preborn neighbors without exception or compromise.

Representative Doug Richey, you would have the people of at least 1,800 MO churches behind you to end abortion, if you really wanted to. If you would only tell the truth — not distract from it as you have demonstrated to me and others.

Christians, not just Missouri Baptists, must cry “Point of order!,” and keep our civil magistrates in check, especially if they claim to follow the King who is Lord over all thrones and dominions, and the Head of the Church (Colosians 1:15-20)! Therefore, we must continue to reprove, rebuke, and exhort them (2 Tim. 4:2);  praying for them (1 Tim 2:2) to walk worthy of the calling to which they were called. May God grant us repentance (2 Tim. 2:25).

Adam Cochrun is an abolitionist in Springfield, MO and host of the T.A.G. You’re It Podcast.