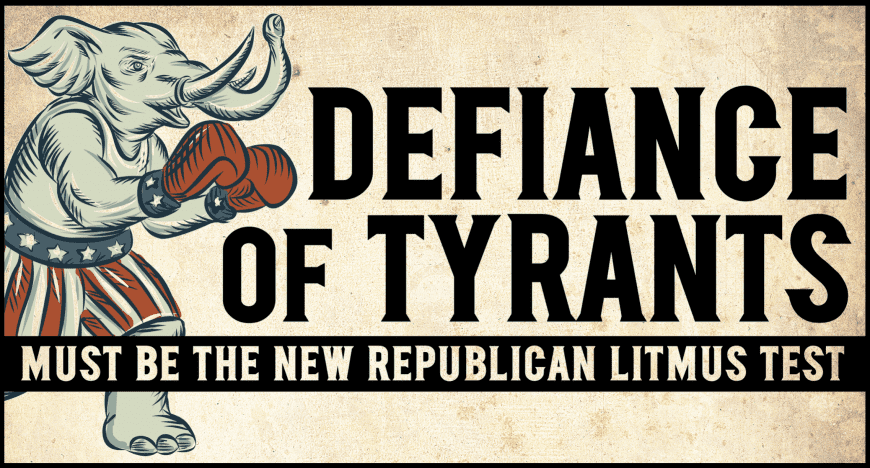 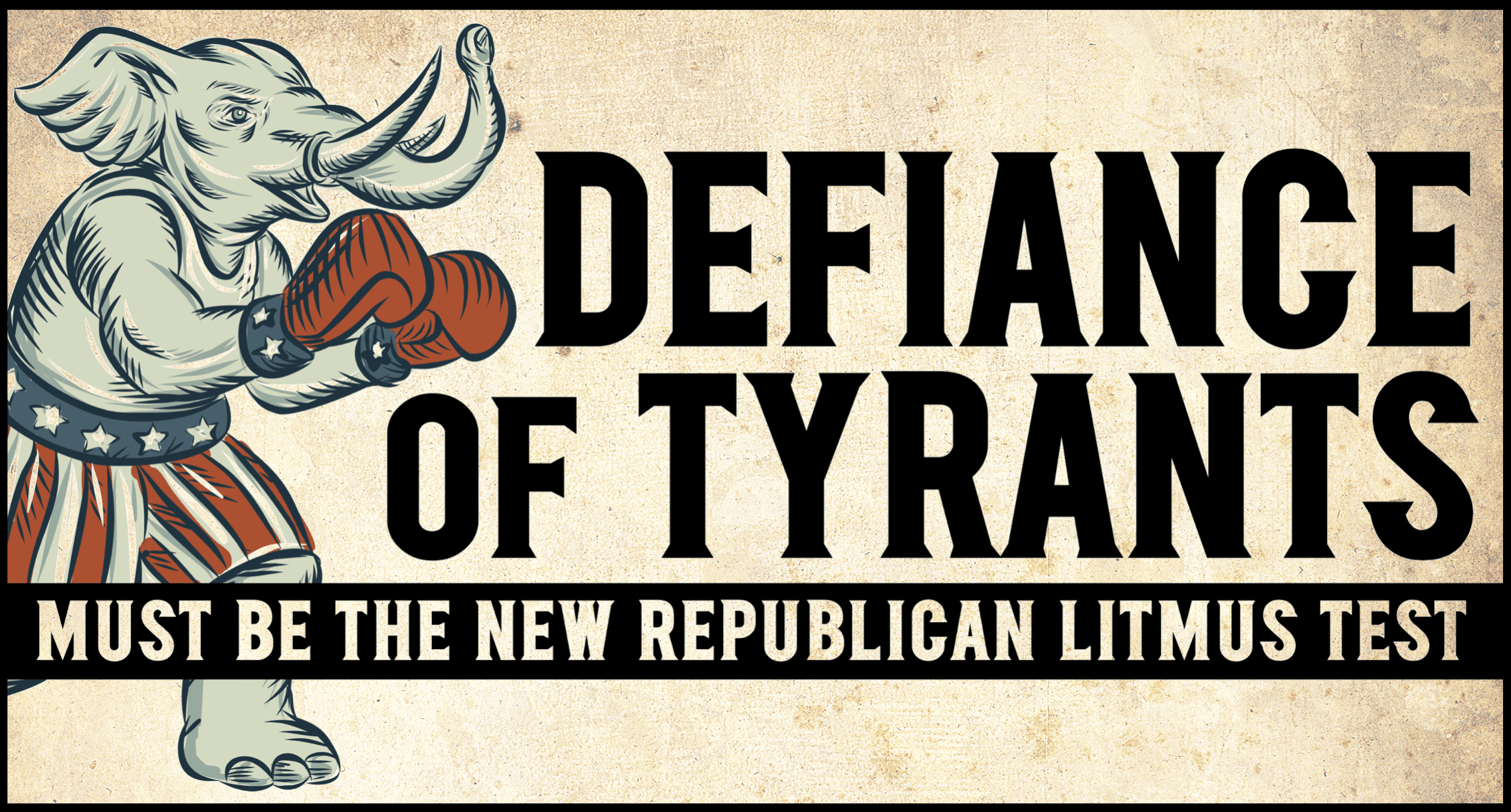 In The Screwtape Letters, C.S. Lewis observed that “Courage is not simply one of the virtues but the form of every virtue at the testing point.” Without courage, the other virtues are hardly relevant, as they will only be expressed when it is easy to express them.

Reworking Lewis’ point for the political situation we find ourselves in, it must be said that nullificationism is not simply one of the Republican policies, but the form of every Republican policy at the testing point.

Is D.C. Due Unconditional Submission?

In a sense, it is shocking to watch an American president announce his intentions to nationally mandate a medical procedure using an unaccountable, alphabet soup agency to fascistically control private businesses and individuals. But it shouldn’t be. The States have treated the federal government as a god for decades. Why should we be surprised when it begins — or rather, continues — to act like one?

As the federal government has ballooned into a leviathan that is no longer a recognizably American institution, conservative political and legal communities have gone with it, embracing a philosophy of federal ex cathedra rule by rejecting all State-level agency in Constitutional interpretation.

Unconditional submission to the federal government is first and foremost the most un-Biblical concept imaginable as it is a rejection of the very first commandment: “You shall have no other Gods before me.” Second, it is the most un-American concept imaginable as it negates the legitimacy of the Declaration of Independence, and denies the concept of limited government by granting the federal government the power to define the limits of its own authority over the States and people. Third, it is rooted in a rewriting of the true historical legacy of nullification.

“True it is, God has commanded kings to be obeyed,” John Knox wrote in his Appellation to the Nobility and Estates of Scotland. “But likewise true it is, that in things which they commit against His glory, He has commanded no obedience, but rather, He has approved, yea, and greatly rewarded, such as have opposed themselves to their ungodly commandments and blind rage.”

Submitting to authority is undeniably a Biblical principle (Romans 13:1-7). But it is equally undeniable that God’s word teaches that civil magistrates forfeit their authority when they rebel against Him. In Exodus 1, the Hebrew midwives defy Pharaoh’s order to kill newborn boys, and are blessed by God because of it. In Daniel 3, Shadrach, Meshach, and Abednego — who were magistrates in Babylon — defied Nebuchadnezzar’s command to bow to his statue and were miraculously saved by God from death in the king’s furnace. In Acts 5, the apostles told the Sanhedrin that they would continue breaking the law by preaching Christ crucified because “We must obey God rather than man.”

As attorney Bradley Pierce of the Foundation to Abolish Abortion wrote in a SCOTUS amicus brief submitted in Dobbs v. Jackson Women’s Health, “The Court in Roe has said that evil must be allowed to run rampant in our land contrary to God’s commands to magistrates to restrain it. But if God commands one thing, and the Court commands another, whom do we obey? If Americans are unwilling to say no to the Court, what have we made it?”

It cannot be that the Constitution, which was authored — to a significant degree — by the same people who authored the Declaration of Independence such as John Adams and Thomas Jefferson, would ever recognize or affirm the unconditional authority of any governing entity. Yet the prevailing view in today’s legal community on both sides of the aisle is that the federal government possesses unconditional authority to define the limits of its own power to control the States and the people, and that States and people have no recourse but by petitioning the very tyrant which oppresses them.

As a particularly egregious example, consider Roe v. Wade, the unconstitutionality of which is not debated by serious individuals. As put by former Dean of Stanford Law John Hart Ely, the fourth most-cited legal scholar in American history and a supporter of legal abortion, “[Roe v. Wade] is not Constitutional law and gives almost no sense of an obligation to try to be.” In other words, the seven justice majority in Roe didn’t even try that hard to make their decision appear legitimate.

Echoing Ely, Roe author Harry Blackmun’s clerk Edward Lazarus (also an abortion supporter) wrote in the Washington Post that, “as a matter of constitutional interpretation, even most liberal jurisprudes — if you administer truth serum — will tell you [Roe] is basically indefensible.” The genocidal 1973 decision was a naked power grab and an obvious fabrication of a “Constitutional right” from whole cloth: the greatest political fraud ever perpetrated on the American public.

Of course, Congress should have done their part in pushing back judicial insurrection by impeaching the seven justice majority in Roe. But their failure to do so does not absolve State-level officials from upholding the right to life and defending the Constitution against the usurpations of the Supreme Court, so help them God.

To affirm that States must submit unconditionally to that which everyone knows is unconstitutional would be to, in Pierce’s words, “render the Constitution illusory, and turn the very concept of having a written constitution on its head.”

The legal, political, and educational establishments have embraced the myth that nullifiers were the villains of American history; a lie which couldn’t be further from the truth.

The slavery abolitionists were nullificationists in word and deed. Following the Fugitive Slave Act, abolitionist poet John Greenleaf Whittier wrote, “Since the passage of the Fugitive Slave Law by Congress, I find myself in a position with respect to it, which I fear my fellow citizens generally are not prepared to justify. So far as that law is concerned, I am a nullifier.” William Lloyd Garrison echoed Whittier in an article for The Liberator: “The nullification advocated by Mr Whittier…is loyalty to goodness.”

Abolitionists in five states made these sentiments a reality. Milwaukee-area abolitionists broke escaped and abused slave Joshua Glover out of jail and whisked him to Canada on the Underground Railroad. When instigators were charged with violating the Fugitive Slave Act, the Wisconsin State Supreme Court found the Fugitive Slave Act unconstitutional and therefore void in Wisconsin.

Massachusetts’ Personal Liberty Act of 1855 made enforcing the Fugitive Slave Act a crime punishable by up to five years in prison, mandated impeachment for any state official who aided slave-catchers, and disbarred any attorney assisting in the return of slaves to their “owners.” Vermont and Michigan passed similar legislation. New Yorkers practiced jury nullification in defense of rescuers who helped escaped slave William “Jerry” Henry to freedom. The abolitionists were nullifiers.

Historically, the alternative to defying tyrants was well articulated by final solution co-architect Adolf Eichmann and other Nazi war criminals who pleaded not guilty to the crimes against humanity they were charged with on the grounds that they were just following orders (“behfel ist behfel”). Almost all of them were executed and rightfully so. The Nuremberg Defense is no more legitimate for the pro-life Governors, State legislators, and State judges sanctioning the mass murder of preborn children today than it was for those on trial in Nuremberg.

Necessary to restoring functional checks and balances and protecting born and preborn people from the violent aggression of the federal government is standing firmly on the Word of God and the Constitution against the enemies thereof. It also means providing no quarter to those who defend the notion of unconditional authority of higher magistrates over the lesser.

Governor Asa Hutchinson’s veto of the Arkansas Sovereignty Act must be the end of his career as an influential voice in the Republican party. Oklahoma Senate Pro Tem Greg Treat’s opposition to the Abolition of Abortion in Oklahoma Act every year since 2019 must be the end of his unless he repents. Likewise for every bootlicking enabler of violent tyranny from sea to shining sea.

This subject isn’t simply or even primarily a political question, but one of character. What sort of people are we? In the amicus brief, after asking what we have made the Supreme Court if we obey them unconditionally, Pierce also asks, “If Americans are unwilling to say no to evil, what does that make us?” The question is left rhetorical, but the answer is obvious: It makes us evil.