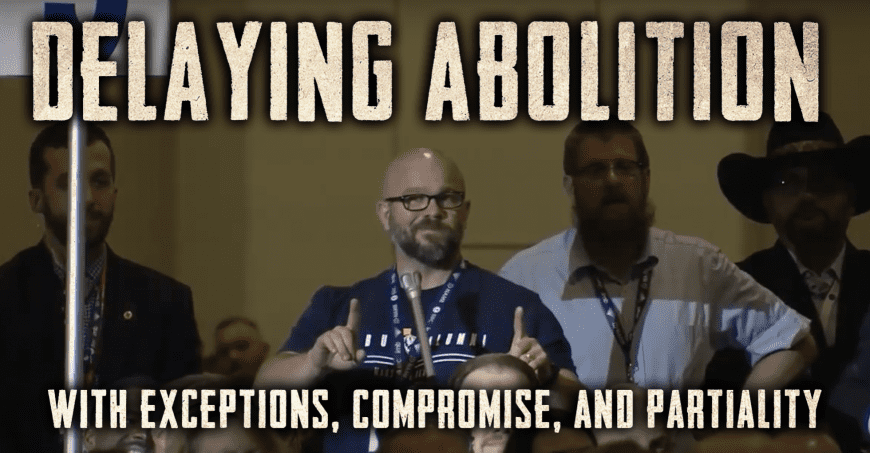 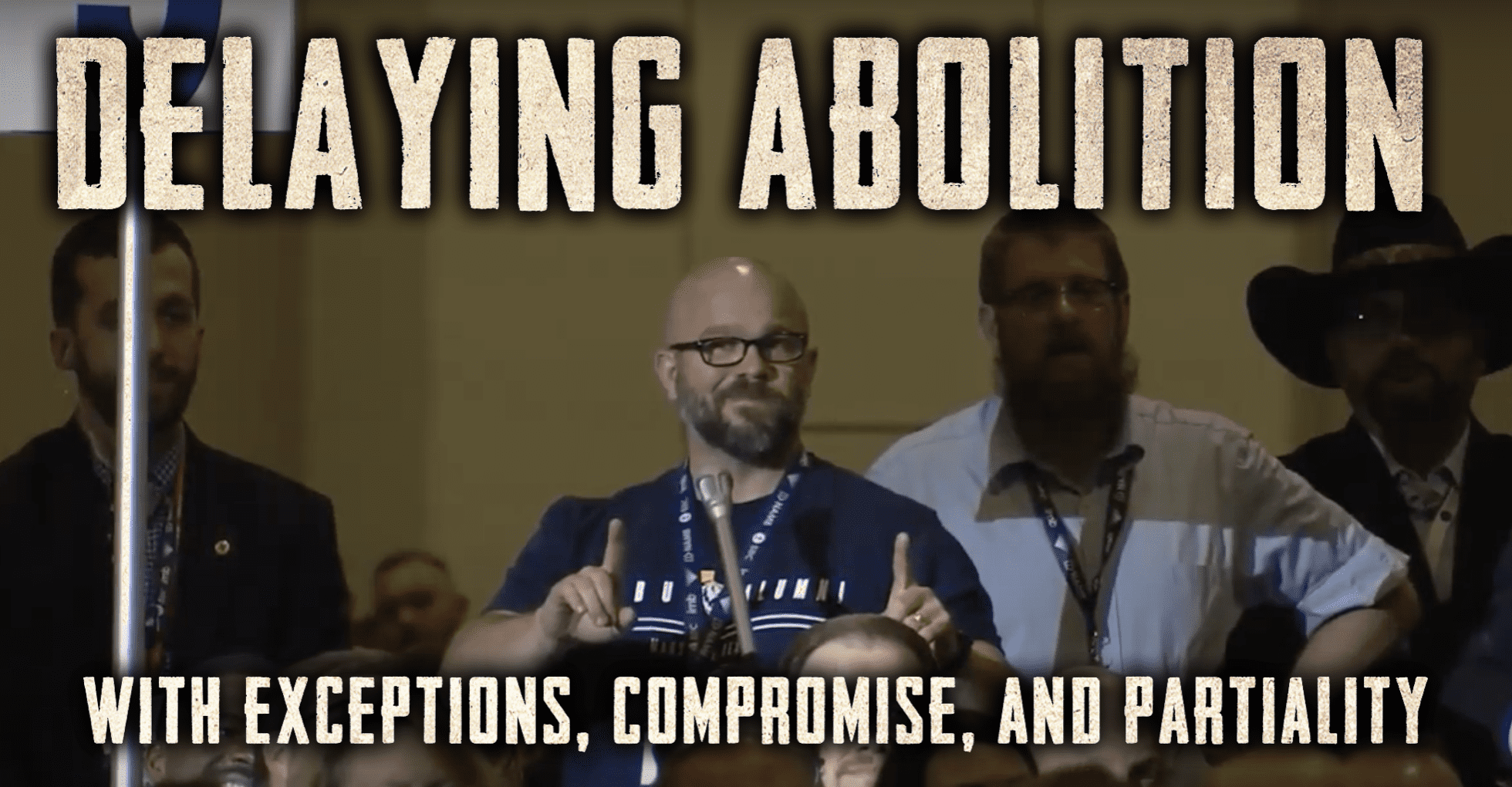 During the floor debate at the 2021 Southern Baptist Convention, Dr. David Norman made a motion to indefinitely postpone the Resolution on Abolishing Abortion — effectively killing it. Here, we will examine Norman’s stated reasons for his motion and the assumptions and errors he makes.

Norman opened by saying, “This resolution repudiates every pro-life resolution ever passed by the Southern Baptist Convention. Therefore, I move that we lay it on the table.”

It is true that the Resolution on Abolishing Abortion renounced pro-life regulationism, the ideology which underlies most, if not all, previous SBC resolutions on abortion. It rejects any position that:

1) “Allows for any exceptions to the legal protection of our preborn neighbors,”

But underlying Norman’s motion is the assumption that the pro-life resolutions passed previously were good and just resolutions.

SBC pro-life resolutions have affirmed the sanctity of human life, called abortion sin, and Roe v. Wade an assault on human life. However, not only have a grand total of ZERO previous resolutions called for the immediate abolition of abortion, but many previous resolutions have supported legislation that actually establishes when child sacrifice is permissible, thereby sanctioning it, sometimes implicitly and sometimes explicitly.

Let’s look at some specific past resolutions.

1) 1989 resolution: called for the Legislature and Congress to restrict the practice of induced abortion.

To restrict something is to limit or control or regulate it. In the case of child sacrifice, it is a massive understatement to say that this call for the government to “restrict” child sacrifice is a failure of the SBC to be a prophetic voice.

There is hardly a difference, if any at all, between this demand and the former slogan of the pro-abortion movement calling for abortion to be “safe, legal, and rare.” It should go without saying among Bible-believing Christians that this resolution failed to be a consistently Christian witness to the culture. It should be repudiated.

2) 1982 and 1993 resolutions: opposed the use of federal, state or local tax money for the practice of abortion.

Keep in mind, this “Not with our money!” cry is in response to rampant, legalized child sacrifice taking place all across our nation. In other words, asking that it not happen with our money to “protect the consciences of millions of pro-life taxpayers” speaks to the aberrant idea that as long as our tax dollars are not involved, we can have clear consciences in the matter of our fellow image-bearers being slaughtered. Those taxpayers are part of a nation that is complicit in allowing child sacrifice to go on by the millions. Before God, their complicity related to taxes is the least of their worries.

In a recap of the SBC’s 2021 annual meeting, Norman spoke highly of Resolution #3 (another defunding resolution) as a very pro-life resolution, because — he said — it is important that taxpayers are not complicit in abortion.

Yet, in the very same recap, Norman expressed gratitude for Resolution #8. This resolution, by stark contrast, calls upon China to cease its program of genocide immediately, and urges the U.S. government to take actions towards the Uyghur’s immediate release from concentration camps.

Imagine if someone proposed an amendment to gut Resolution #8, changing it to say that the SBC merely opposes the use of taxpayer dollars towards funding the Uyghur genocide. Such an amendment would have been recognized as indifferent towards the plight of the Uyghur people, and a complete failure to say what needs to be said by the Church regarding this atrocity. Why does Norman — and other pro-life leaders within the SBC — fail to apply the same standard for the preborn as they do for the Uyghur people?

Calling for the defunding of an atrocity, while stopping short of calling for abolition, is a far cry from adherence to the law of God which demands the civil punishment of those who sacrifice their children, and declares that His wrath will be carried out on all who close their eyes to the injustice (Lev. 20).

3) The 1996, 2002, 2003, and 2015 abortion-related resolutions all fall into the category of calling for mere restrictions on abortion. The first three by supporting the partial-birth abortion ban — a ban that allows murder of preborn babies as long as one particular late-term procedure isn’t used — and the latter welcoming legislation that ensures mothers are fully informed before murdering their child. Each resolution promotes legislation which, in violation of God’s standard of justice, legitimizes the practice of child sacrifice by merely setting the guidelines of when, where, and how you can murder your baby.

Regulating abortion certainly does not provoke abhorrence for the slaughter. As English Abolitionist of Slavery Elizabeth Heyrick said in her 1824 pamphlet, Immediate, Not Gradual Abolition:

“[The slave holder] knew very well, that the contemplation of a gradual emancipation, would beget a gradual indifference to emancipation itself.”

Sadly, this is plainly apparent in the past SBC resolutions on abortion from 1971-2015. Only twice was abortion referred to as “murder”, and in one of those two instances, it was in a 1974 pro-abortion resolution that called opposing all abortion as murder an “extreme” position. Every resolution since has been pro-life, but these pro-life resolutions often display a complacency towards the greatest genocide in human history, accepting half measures that toy around dealing with the injustice, and are themselves unjust. Not once has the call for abolition been made by the SBC — until now. Some might call this moving the convention forward, but not David Norman.

After the motion received a second, Norman spoke again to his motion:

“Southern Baptists… we are a pro-life convention. We are anti-abortion. But this resolution requires that we walk back from every pro-life resolution we’ve passed.”

My pro-life friends believe the regulationist/incrementalist approach to dealing with legalized child sacrifice is moving us forward towards the abolition of abortion. It is not, but even if it was, why would Norman call their end goal (abolishing abortion) “walking back” from the path you took to getting there? That’s not to say that Norman does not want abortion to be abolished; I believe he does. However, his motivation for making this assertion is incredibly confusing. If our shared goal is abolishing abortion, how is taking a position for abolishing abortion walking backwards, unless you concede that pro-life regulationism is walking in the opposite direction of abolition?

Pastor Bill Ascol’s response on the convention floor was spot on:

“This resolution doesn’t walk anything back, it walks us forward towards the immediate abolition of abortion without exception or compromise.”

The lines were clearly drawn: would the SBC move beyond calls for restricting abortion and fight with a biblical foundation, or would the SBC continue a compromised, failed — yet popular — politically pragmatic strategy? Fortunately, the majority of messengers voted in favor of the former: adopting the resolution and a truly consistent Christian worldview applied to the abortion holocaust. The immediate abolition of abortion without exception or compromise — in defiance of the supreme court — became the battlecry of the SBC. The weekend following the SBC, in an Instagram post celebrating two pro-life victories in Texas — the TX Heartbeat Act (SB8) and Trigger Bill (HB1280) — Norman wrote:

“I’m thankful for every step taken toward the eradication of abortion. Well done, #txlege”

So not only did Norman stand against the abolition of abortion resolution, but he turned around and affirmed a bill that promotes God-hating partiality against babies with certain arbitrary capabilities, and a bill that strengthens an idolatrous view of the courts. SB8 was a particularly atrocious pro-life bill because not only did it fall short of justice, it actually was even worse than the Texas status quo.

Norman’s understanding of how the abolition resolution addresses some previous resolutions on abortion is accurate. However, his argument against repenting of previous positions is — like all the other pro-life anti-abolitionist arguments from SBC leaders — completely devoid of Biblical reasoning, and erroneously assumes good in anti-Biblical, humanistic resolutions put forward by well-meaning Christian men and women.

His understanding of pro-life gradualism moving us forward towards eradicating abortion is woefully misguided, and his staunch support of gradual steps blinds him to the point where he believes standing for the immediate abolition of abortion without exception or compromise is an affront to the goal of abolishing abortion.

With all of this said, it’s important to note again that these errors do not necessarily mean Norman is not well-intentioned and does not genuinely hate abortion. Article 10 of the Resolution on Abolishing Abortion said that though incremental pro-life laws effectively sanction abortion, they are well-intended. This is the case with many pro-lifers. But those pro-lifers have an obligation to shift their position when it is made clear to them that the laws they support are unjust and are actually delaying justice.

English Abolitionist of slavery William Wilberforce speaks harshly about the reality of gradualists’ work without mincing words, while dealing as graciously as possible with the gradualists — like Norman — themselves:

“Let me be forgiven if I speak strongly, where I feel so very deeply. It is not only because the gradual Abolitionists have been, in fact, the only real stay of that system of wickedness and cruelty which we wish to abolish; though that assertion is unquestionably true; but it is trying beyond expression that they should be the real maintainers of the Slave Trade, who reprobate it in terms of detestation as strong as any which we ourselves can utter. Nor do I mean (the declaration is made with solemnity and truth) that these expressions are not sincere. If they were not proved to be so by the general character of those who use them, my personal knowledge of some of them, and the esteem and regard I entertain for them, excludes the contrary supposition. Yet I cannot but believe, that, could they have clearly foreseen what would be the practical effect of their opposition, it would not have been continued for an hour [p. 295].”

I hope and pray for my brothers like Norman, that they will see how the practical effect of their opposition to immediate abolition and insistence on gradualism is maintaining the abortion holocaust we seek to abolish, and upon this recognition will repent immediately – without exception or compromise.