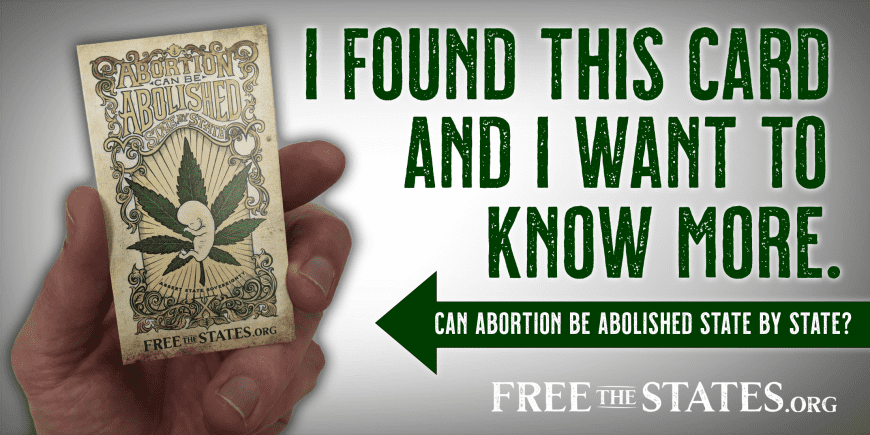 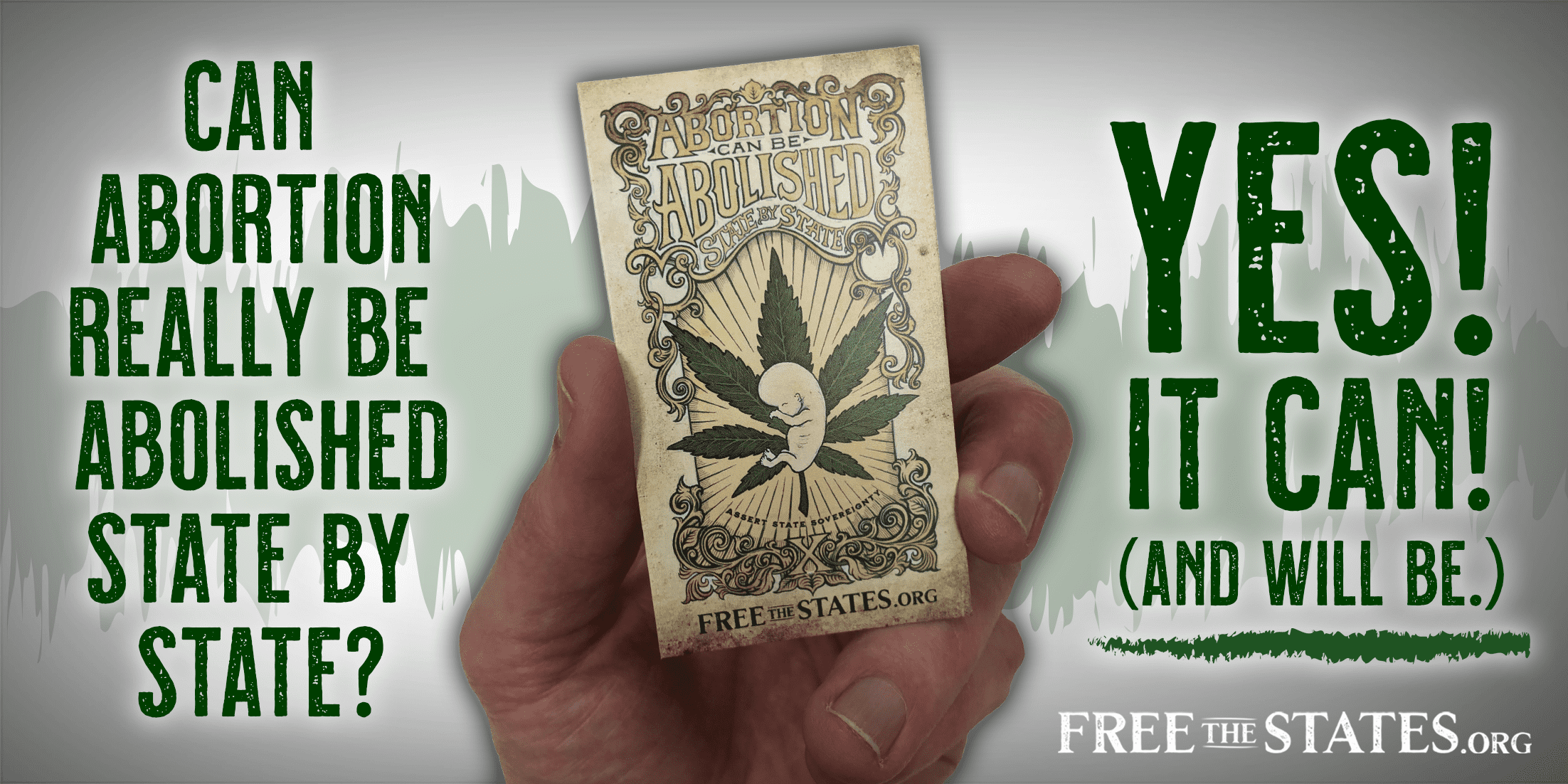 [UPDATE: Roe v. Wade has been overturned. Tragically, every state in the union obeyed orders to allow the murder of children for 49 years. All of this information remains relevant as it is possible that Congress or the executive branch may attempt to once again for child murder on the states. Should that happen, we must be prepared to defy them, obey the higher law, and abolish abortion.]

One of the primary differences between pro-lifers and abolitionists is the disagreement regarding whether the supreme court – or any governing entity – has the authority to make murder legal.

For the pro-life leaders, there is no law above the opinion of the supreme court. The submission of the states to Roe must be unconditional. This was articulated most clearly by Texas Alliance for Life Executive Director Joe Pojman who explained his opposition to the Abolition of Abortion in Texas Act by telling the Houston Chronicle, “We could no sooner ignore SCOTUS than the force of gravity.”

This view has also been articulated by two of the most prominent pro-life leaders, Abby Johnson and Scott Klusendorf. Among other reasons for opposing the bill, Abby Johnson explained in a Facebook post that she opposed immediately abolishing abortion at the state level because “it is unconstitutional.” Scott Klusendorf said at a Christian conference in 2016 that “the federal courts have already decided in Roe vs. Wade, the Casey decision, and others, that no unborn children have the right to life. They’ve already dictated that from on high.” Klusendorf’s belief that the federal judiciary is “on high” and therefore due our unconditional submission is anathema both to God’s word and the U.S. Constitution.

Abolitionists utterly reject these views. We believe that no court, president, legislative body, king, queen, emperor, or any other governing official has the authority to legalize murder – to declare a class of human beings sub-human and sanction their killing. Roe, and any other order to allow mass murder like it, is null by its nature. The only proper response to an order to allow mass murder is active defiance. This is true across all times and cultures. In our context, we have the additional benefit of having a founding document which protects the natural right to nullify.

Interestingly, many pro-life politicians will support defying the federal government on certain issues, but never to protect preborn children from murder. In 2018, Idaho State Rep. Bryan Zollinger was an avid supporter of the State Sovereignty Responsibility Act which would have established “Whenever the federal government assumes undelegated power, its acts are unauthoritative, void, and of no force.” But when the topic of abolishing abortion came up in a committee hearing in 2020, Zollinger argued “It’s pretty well accepted that the supreme court is the final say of what’s constitutional… I don’t see any way to get around that unless we went nullification and we all know that doesn’t happen in reality.”

Nullification happens constantly in reality. More than half the states have decriminalized marijuana in defiance of the federal Controlled Substances Act and the Gonzales v. Raich supreme court decision. Oklahoma State Senator Greg McCortney was the champion of the bill to defy the feds and legalize marijuana in the state. In 2020, he was the committee chairman who denied The Abolition of Abortion in Oklahoma Act a hearing. Oklahoma Senate Pro Tem Greg Treat authored a bill in 2016 nullifying EPA regulations. But regarding abolishing abortion, Treat said in a 2019 hearing that “nullifiers are the villains of history.”

Pro-life politicians do this, in large part, because while the marijuana lobby, and the second amendment lobby, and many other groups urge state legislators to defy the federal government, the pro-life lobby encourages unconditional submission even when it means the mass murder of image bearers of God.

Abolitionists and the bills we support do not submit to wickedness. We defy Roe, Planned Parenthood v. Casey and any other obviously evil, obviously unconstitutional federal action that deprives preborn children of the right to life. Failing to do so is cowardice or idolatry. Abortion can, must, and shall be abolished state-by-state regardless of the supreme court’s position on the matter.

In episode #5 of The Liberator Podcast, beginning at the 51:29 mark, we talked about why legislation to abolish abortion must include language nullifying all violations of the right to life including Roe v. Wade and Planned Parenthood v. Casey. Make sure to subscribe to our YouTube channel and like us on Facebook so you don’t miss new episodes of The Liberator Podcast Thursdays at 6 pm!

This presentation from Constitutional Attorney and Abolish Abortion Texas Director Bradley Pierce explains why we are appeasing evil if we will not defy Roe.

Why is Roe v. Wade wrong? Why is abortion wrong? Why do we have a duty to stand stand for justice? Because there is an objective standard of right and wrong. Some may profess not to believe in right and wrong, but we all know it exists. You can’t live not being certain of the objective evil of murder and rape. That’s because you’re created in the image of God.

Atheist philosopher Richard Dawkins can profess to believe that “The universe we observe has … no design, no purpose, no evil and no good, nothing but blind, pitiless indifference. … DNA neither knows nor cares. DNA just is. And we dance to its music.” But he can’t live that way. He expresses moral indignation at all sorts of things, as if there is an objective standard of morality that is being broken. Ironically, he expresses indignation at God Himself, calling religion “the root of all evil.” But what is evil in a universe of blind, pitiless indifference? How can evolved stardust commit evil? The simple act of calling something “good” or “evil” is to borrow from the Christian worldview. Atheism cannot justify these concepts.

Everyone knows there is an objective standard of right and wrong, and further, everyone knows who has revealed to us this standard. Romans 1 tells us that “the wrath of God is revealed from heaven against all ungodliness and unrighteousness of men, who by their unrighteousness suppress the truth. For what can be known about God is plain to them, because God has shown it to them. For his invisible attributes, namely, his eternal power and divine nature, have been clearly perceived, ever since the creation of the world, in the things that have been made. So they are without excuse. For although they knew God, they did not honor him as God or give thanks to him, but they became futile in their thinking, and their foolish hearts were darkened. Claiming to be wise, they became fools.”

Although the truth about God is plain to us, we suppress that truth because we love our sin and don’t want to submit to God’s authority. But for this sin and every other, there is forgiveness. All have fallen short of God’s standard (Romans 3:23). Every one of us has sinned and deserves the punishment for our sin. but as Romans 5:8 tells us, you can be made righteous before God, because, despite your sin, “God shows his love for us in that while we were still sinners, Christ died for us.” Salvation is found in the grace of God alone through faith in Christ alone (Ephesians 2:8-10). He died the death that we all deserve, so that we, by faith in Him, could receive his righteousness.

If you have not given your life to Christ, do not let another day go by! Repent of your sins, put your faith in Christ, and dedicate your life the one who gave up His life that we might be reconciled to Him. Send us a message if you have any questions.