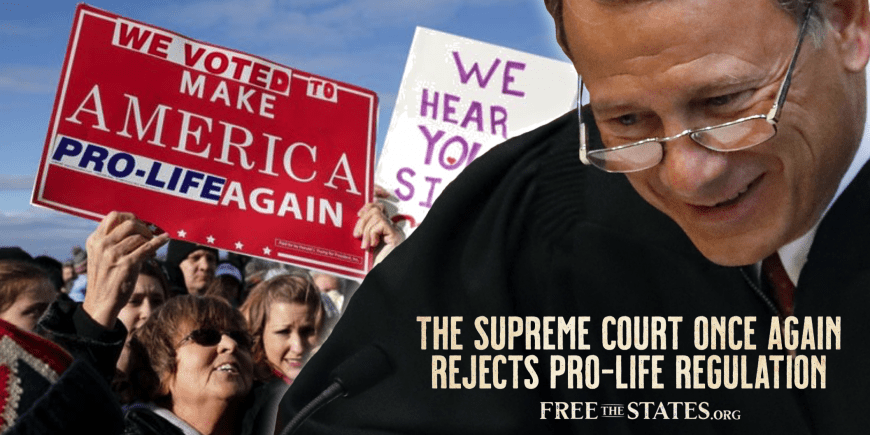 The supreme court made a decision on Monday which should convert every reasonable pro-lifer into an abolitionist. They have struck down another milquetoast pro-life regulation, a Louisiana law which would have required abortion clinics to have hospital admitting privileges within 30 miles.

In making this 5-4 decision, Chief Justice Roberts, along with the four Democrat-nominated justices, appealed to a 2016 court decision striking down a similar Texas law. Even though Roberts previously dissented the 2016 decision, he concurred with Monday’s decision on the basis of the “precedent” that the 2016 decision set.

This illustrates a very important reality: the supreme court doesn’t care about the Constitution. The Constitution is not the authority for most justices; precedent is. So long as its decisions are made on the basis of precedent, Roe will never be overturned. Roe is precedent.

Let’s keep in mind that the Louisiana law which was struck down wasn’t even an abortion ban. It merely regulated which killing centers were allowed to operate based on whether or not they had hospital admitting privileges. If the Supreme Court won’t even uphold a law which merely regulates murder, how can we expect it to uphold a law criminalizing abortion altogether?

The only feasible means we have of abolishing abortion is to defy the Supreme Court. To do this, pro-life politicians need to stop speaking the enemy’s language. The Louisiana law pretended that abortion is just another medical procedure which needs to be regulated. Trying to fight abortion this way isn’t just dishonest and immoral. It sets us up for failure.

That’s why the Louisiana law failed. It treated abortion like a medical procedure, then argued from that false premise that it should be regulated in order to keep those getting abortions safe. As long as the reasoning for pro-life legislation stems from dishonest or false premises like the safety of the mother, a baby’s heartbeat, or any other incremental legislation, it won’t be a demand with the backbone necessary to make cultural headway.

Instead, we need bold magistrates who will speak the truth and act accordingly. Abortion is murder. As such, it must be abolished outright. When the supreme court claims that abortion is constitutional and must be allowed, the supreme court must be defied. It is the constitutional and God-given duty of the states to criminalize abortion as murder, as outlined in the 14th Amendment and Amos 5:15.

An honest and biblical approach is how we end the holocaust. So long as pro-life politicians keep presenting weak and half-hearted murder regulations to the Supreme Court in the hopes that it will deem them constitutional, the holocaust will continue. Abolitionists, on the other hand, have a simple, feasible, and biblical plan for abolishing abortion: Obey God by defying tyrants! Establish justice for the least. The duty to make this demand and work toward its achievement is ours. The results belong to God.