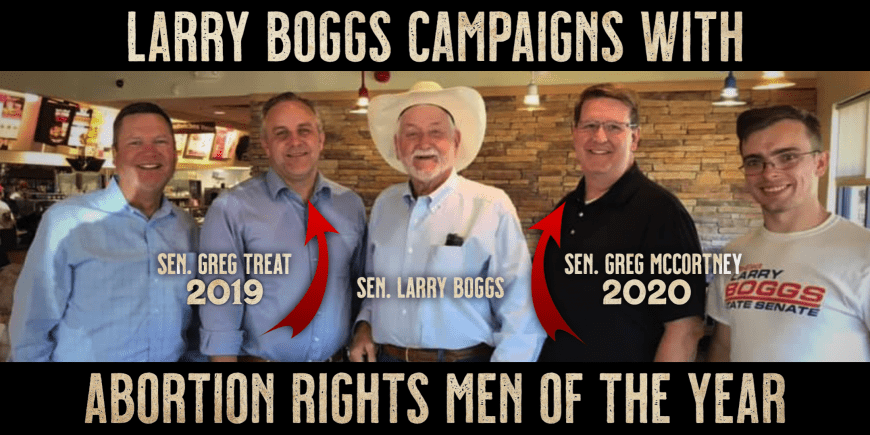 This picture was posted alongside the caption, “Truly humbled! Thank you to Senator Treat, Senator Hall and Senator McCortney for making the long trip to McAlester to show your support! The young man at the end is Conner Alford who has been a big help on my campaign!” 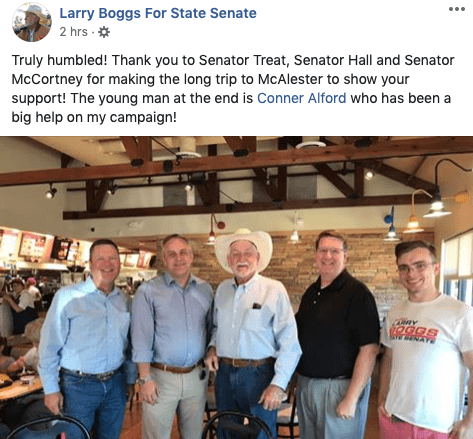 State Senator Greg McCortney is the current chair of the Senate Health and Human Services (HHS) Committee, the committee where The Abolition of Abortion in Oklahoma Act (SB13) was assigned. As committee chair, McCortney had sole discretion over whether SB13 would receive a hearing. It did not receive a hearing.

When Senator Joseph Silk motioned to bring SB13 out of committee and on to General Order, McCortney voted in favor of Senator Kim David’s motion to table Silk’s motion and kill SB13 for good; and that’s the short version of how abortion was kept legal in Oklahoma in 2020. Read more about McCortney’s well-deserved Abortion Rights Man of the Year honors here.

The man who assigned McCortney to be the chair of the Senate HHS Committee was Oklahoma Senate Pro Tem Greg Treat, the 2019 Abortion Rights Man of the Year. While it was ultimately McCortney’s call on whether to hear SB13, Treat has been the primary opponent of SB13 since the beginning of 2019, and likely only gave McCortney the position on the condition that he deny SB13 a hearing.

Over the past year-and-a-half, Greg Treat has claimed that abolishing abortion is unconstitutional and even that abolishing abortion without permission from the supreme court nullifies the US Constitution. He has falsely claimed that nullifiers are the villains of history, when in reality, the abolitionists of slavery were the fiercest advocates of nullification. He has falsely claimed that abolitionists don’t actually care about saving babies, and that the real goal of SB13 is secession. As the Senate Pro Tem, Treat has used his access to the media to spread these lies and more.

Treat punished Senator Joseph Silk severely for fighting for abolition and for his criticisms of the Oklahoma Senate for their refusal to abolish abortion. Silk was stripped of his committee leadership assignment and most of his bills were blackballed. This action against Silk is a big reason why so many Senators are opposing The Abolition of Abortion in Oklahoma Act. They know that if they support the bill, they risk facing consequences from leadership.

Greg McCortney and Greg Treat, more than anyone else, are responsible for abortion still being legal in Oklahoma. It’s no surprise that they would campaign for Larry Boggs who is facing a primary challenge from abolitionist Warren Hamilton. Beyond campaigning with him, McCortney also donated $2,800 from his campaign to the Boggs campaign.

Warren Hamilton has promised to support The Abolition of Abortion in Oklahoma Act and we have endorsed his campaign. Those like McCortney and Treat, who are doing everything in their power to avoid having to abolish abortion, do not want men like Warren Hamilton in the State Senate. For that reason, the 2019 and 2020 Abortion Rights Men of the Year are campaigning for Boggs; and Boggs, apparently, is happy for them to do so.