In the wake of Jason Smalley’s abrupt resignation from the State Senate, Greg McCortney was announced as the new chair of the Senate Health and Human Services (HHS) committee on January 27. His new position came with sole discretion in deciding whether to hear the Abolition of Abortion in Oklahoma Act (SB13).

To that point, McCortney had not publicly taken a side on the immediate abolition of abortion. That combined with the fact that he is someone who Greg Treat would choose to appoint to that position was worrying, but we gave McCortney the benefit of the doubt.

We asked people to kindly but firmly email McCortney asking for SB13 to be given a hearing. We covered his district with door hangers letting people know that McCortney was in the position to be a hero for preborn children. 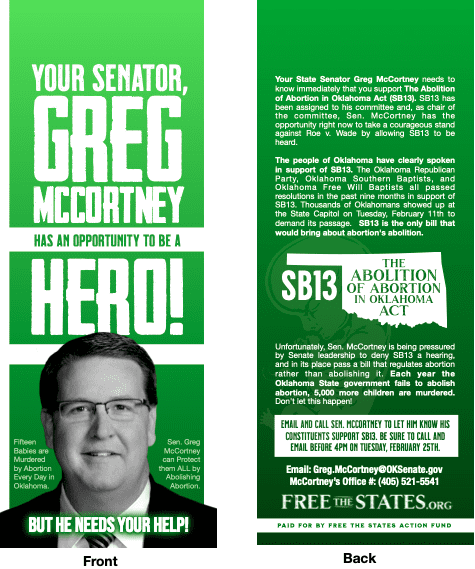 Senate Rule 7-9 allows for legislation to be withdrawn from committee and placed on General Order where it can then be brought to the Senate floor for a hearing. On March 11, Senator Joseph Silk, primary author of the Abolition of Abortion in Oklahoma Act, motioned to do exactly that. Kim David, who is the Abortion Rights Woman of the Year, made a counter-motion to table Silk’s motion and thereby kill SB13 for good. McCortney voted ‘Yea’ on David’s counter-motion. SB13 died.

Further, McCortney intentionally slandered abolitionists the morning of the vote, pretending that we were a security threat at the capitol. This has been a recurring tactic among the pro-life Senators who want to falsely portray abolitionists as crazy and violent in an attempt to discredit the abolition bill and the Abolitionist Movement. McCortney dishonestly tweeted that abolitionists were an embarrassment to Christianity because of how much of a security threat we are, knowing full well that there has never been a single security threat caused by abolitionists: “The @OHPtraffic is here in numbers and there have been multiple security briefings because the Christians are coming back to #OKLeg today. That statement is embarrassing.”

A number of Oklahoma abolitionists had on-point responses.

Just gonna leave this here for ya…

Proverbs 17:15
He who justifies the wicked and he who condemns the righteous
are both alike an abomination to the Lord.

Don’t mock your brothers and sisters, who’ve given up their days and dollars to fight for these helpless babies, Greg.

Are you saying there aren't already Christians there? 🤔

Clearly there is no need for extra security considering the peacefulness of the people here at the Capitol. What’s embarrassing is that our pro-life senators, who claim to be Christians themselves, are the ones blocking a bill that would end human abortion in our state.

Why, Senator, would you want to keep the Christians away from the Senate? Does a Christian influence interrupt your political rhetoric and shine light upon the darkened chambers of the people’s senate? How shameful indeed!

Nothing to fear from any of us besides speaking the truth in love to expose the darkness of Pro-Life legislators allowing abortion to remain legal. Abortion must be abolished. Join these Christians and work for abolition, Senator.

At every turn, McCortney was there to obstruct the Abolition of Abortion in Oklahoma Act. He did more than anyone else to keep the murder of preborn children legal in Oklahoma in 2020.

Lauinger’s candidate survey here in Oklahoma slyly asks candidates to oppose the Abolition of Abortion in Oklahoma Act. National Right to Life is one of the premiere anti-abolition organizations. In states where pro-lifers control the state government and pro-choicers don’t have the political power to effectively fight an abolition bill, Right to Life is the organization lobbying against abolishing abortion. Receiving their endorsement is a clear indication of someone who opposes abortion’s immediate abolition.

For all of his work to keep abortion legal in Oklahoma, Greg McCortney is the 2020 Oklahoma Abortion Rights Man of the Year.

The good news is that McCortney is currently facing a primary challenge from Carisa Roberson, an abolitionist who has promised to support the Abolition of Abortion in Oklahoma Act.