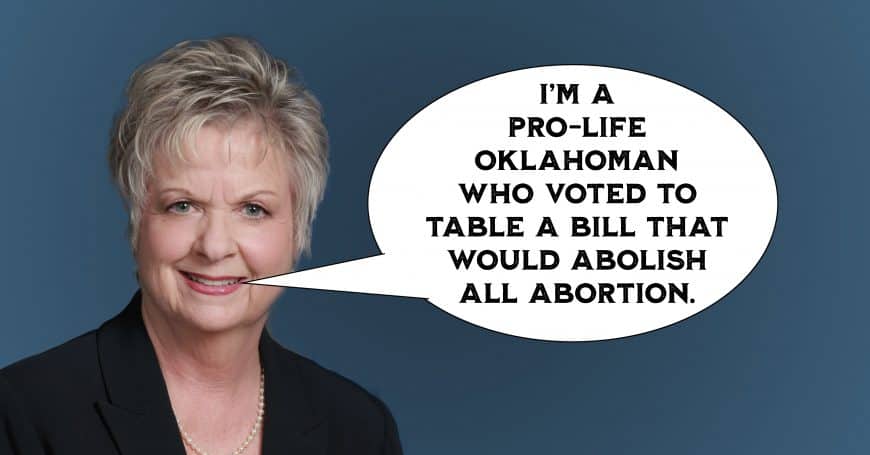 On March 14th, Oklahoma State Senator Julie Daniels (R-Bartlesville) posted on Facebook a defense of her vote to table SB13. “I am a pro-life Oklahoman who voted last week to table SB13 in the senate, a bill that would abolish all abortion in Oklahoma,” Daniels wrote.

To her credit, Daniels does a good job explaining what SB13 is and does. It would abolish abortion in defiance of Roe v. Wade. From there, the post is a mess of Constitutional ignorance and hypocritical supreme court subservience. Let’s go through it.

The 14th amendment of the Constitution establishes that “No State shall make or enforce any law which shall abridge the privileges or immunities of citizens of the United States; nor shall any State deprive any person of life, liberty, or property, without due process of law; nor deny to any person within its jurisdiction the equal protection of the laws.” This is federal law. This is what the State of Oklahoma must uphold. 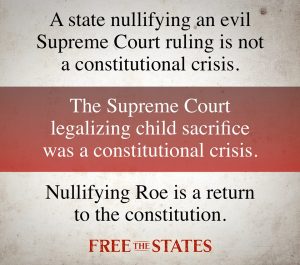 If nullification invites anarchy, then we already have anarchy. As Daniels touches on later in her post, Oklahoma legalized marijuana in defiance of the Gonzales v. Raich supreme court opinion and the Federal Controlled Substances Act. Of course, legalizing Marijuana did not bring anarchy. Life went on as normal, relatively unchanged.

“Let’s say SB13 passed and was signed by the Governor. Since Planned Parenthood challenges all statutes which save unborn lives by limiting abortion, a federal or state court would probably issue an injunction so the law couldn’t go into effect. The state would appeal that ruling and the issue would make its way through the courts. BUT that wouldn’t happen under SB13. Oklahoma would ignore the ruling and prosecute abortionists in spite of the court order. What happens to our Constitutional Republic when a state can defy federal law – executive, legislative or judicial?”

What happened to our Constitutional Republic when we legalized marijuana? Again, roughly nothing. And, to repeat, no federal law is being nullified by SB13. It would defy a supreme court opinion.

The question that needs to be posed to Daniels is, “What happens to our Constitutional Republic and to our fellow image-bearers of God when we give ultimate, unchecked power to the supreme court?” The answer to that question is, of course, supreme court tyranny and the worst mass murder the world has ever seen (over 63 million recorded dead).

“I voted for a ‘red flag’ bill last week, but only after language ignoring federal law was removed.”

Senator Daniels is referring to SB1081 which passed the day after she voted to kill SB13. SB1081 is a bill that would nullify any federal action that would deprive citizens of Oklahoma of their right to due process, as it relates to the second amendment. So should this bill be passed in the House and signed by the governor, any federal red flag gun laws will be null and void in Oklahoma.

Daniels is correct that certain language was removed from the bill. But SB1081 still nullifies federal red flag laws. The bill, as it currently stands, reads: “The State Legislature hereby occupies and preempts the entire field of legislation in this state touching in any way extreme risk protection orders against or upon a citizen of this state to the complete exclusion of any order, ordinance or regulation by any municipality or other political subdivision of this state.”

The language may not be as explicit as SB13 which specifically calls any action to legalize abortion null and void, but the effect is the same. SB1081 nullifies any federal red flag gun laws. Daniels supports it.

“[Abolitionists] are committed to saving the lives of the unborn as am I.”

Daniels is committed to saving the lives of the unborn only if the supreme court opines that Oklahoma can do so. If the courts order Oklahoma to allow mass murder, Daniels says we must oblige.

“Pro-lifers are raising up a generation of young people who are fully committed to life.”

“Ours is a nation of laws not of men.”

Amen, Hallelujah! If only Daniels believed this. What Daniels actually believes is that the law means nothing. What the Constitution says is entirely irrelevant to Daniels. Only what the nine politically connected lawyers in black robes say matters. In Daniels’ mind, the men and women who make up the supreme court are the law. If the black robes say mass murder of the preborn is legal, then mass murder is legal as far as Daniels is concerned because she advocates for a nation ruled by the whims of men.

“Without respect for the rule of law we could lose all our rights and freedoms – including the right to life.”

We’re now all the way through the looking glass. Daniels is saying that if we uphold the Constitution and the right to life, then we could lose all of our freedoms including the right to life. War is peace. Freedom is slavery. Ignorance is strength.

Daniels is making clear that her submission to the supreme court is unconditional. To her, the court’s authority is ultimate. There is no cause, no matter how truthful and just, for which she would stand up for what’s right if the supreme court opined that she shouldn’t.

This is the exact opposite of what the United States was supposed to be. In an 1820 letter to Charles Jarvis, Thomas Jefferson rebuked Jarvis for beleiving that judges and justices have sole and final authority over the Constitution.

“You seem to consider the judges as the ultimate arbiters of all constitutional questions; a very dangerous doctrine indeed, and one which would place us under the despotism of an oligarchy. Our judges are as honest as other men, and not more so. They have, with others, the same passions for party, for power, and the privilege of their corps…. Their power [is] the more dangerous as they are in office for life, and not responsible, as the other functionaries are, to the elective control. The Constitution has erected no such single tribunal, knowing that to whatever hands confided, with the corruptions of time and party, its members would become despots. It has more wisely made all the departments co-equal and co-sovereign within themselves.”

But even more problematic than the Constitutional illiteracy of Daniels’ argument is its Biblical illiteracy. Daniels argues that the supreme court is owed our unconditional submission up to and including obedience to the supreme court’s opinion that mass murder should be legal in every state. This is the exact opposite of what God’s word tells us to do when a governing authority orders us to do something which is in flagrant contradiction to what God demands of us.

In this case, the supreme court opined that we must allow legalized child sacrifice in our state whereas God’s word demands that we establish justice for the weak and the fatherless (Isaiah 1:12-17, Isaiah 10:1, Amos 5:15-24, Psalm 82:3). Acts 5:17-29 teaches us that when the governing authorities force us to choose between obedience to their wicked decree or obedience to God, we are to obey God rather than man. Daniels and the pro-life establishment, by their insistence on unconditional submission to Roe v. Wade, show that in their hearts, they fear man more than they fear God. To abolish abortion in Oklahoma, we must stop worrying about what the supreme court will do to us if we abolish the mass murder of preborn human beings and start worrying about what God will do to us if we don’t.

Jon Bloom’s 2016 article at Desiring God, “Lay Aside the Fear of Man” addresses the matter of ultimate authorities other than God. An excerpt:

When we feel this fear, it can stir up emotional fog and psychological complexity. But we cut through to the heart of things if we remember a simple biblical truth: we obey the one we fear. The person(s) whose reward of approval we desire most — whose curse of disapproval we most fear to receive — is the person(s) we will obey, our functional god…

Courageously confront your fear of man. “We must obey God rather than men” (Acts 5:29). Obedience calls for courage. Courage is not the absence of the emotion of fear, but the resolve to obey despite what we feel. Exercise your trust in God by stepping out in obedience. “Be strong and courageous. Do not fear or be in dread of them, for it is the Lord your God who goes with you. He will not leave you or forsake you” (Deuteronomy 31:6).

When Daniels ascribes ultimate, unconditional authority to the supreme court, she is displaying more than simple constitutional ignorance. As Bloom points out, the person(s) to whom we ascribe the most authority is our functional god. Daniels is displaying idolatry.

Pro-life Republicans who nullify God’s word and the Constitution in the name of submitting to the supreme court are participating in the subjection of Oklahoman preborn children to the abortionist’s knife. They must be replaced. Julie Daniels must be replaced. If you live in the Bartlesville area and are interested in running for State office, please connect with Thomas Lowery, pastor of Calvary Chapel Bartlesville. His email is ccbville@gmail.com. You can also fill out our contact form if you have any questions.