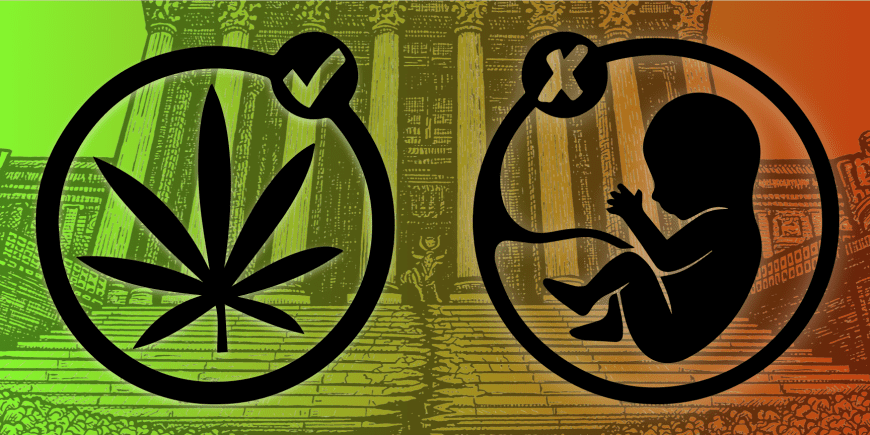 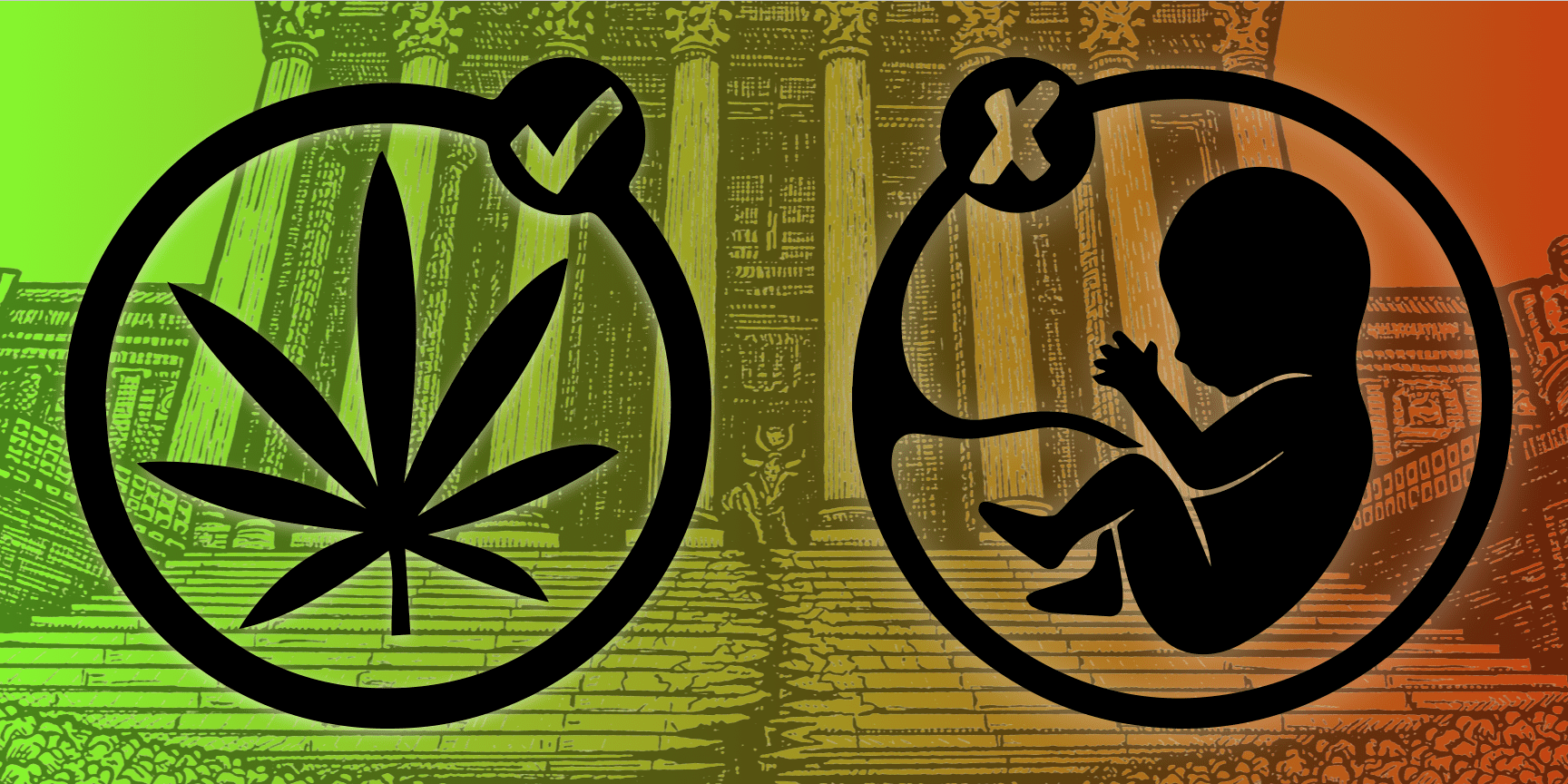 At a committee hearing for HB525, Scott joined many Idahoans in testifying against the bill because it allows government funding of murder. Zollinger responded by declaring that he thinks abortion is murder, but that his ultimate allegiance to the supreme court which means that compromises like HB525 is all we can do: “It’s pretty well accepted that the supreme court is the final say of what’s constitutional… I don’t see any way to get around that unless we went nullification and we all know that doesn’t happen in reality.”

Zollinger is a lawyer and a politician, so he likely knows that what he’s saying is untrue. The chances that he’s unaware of the 22 states currently defying the Federal Controlled Substances Act which outlaws the possession of marijuana and the Gonzales v. Raich supreme court decision which upheld the Federal Controlled Substances Act is very small. Beyond Marijuana, numerous states and municipalities are defying the federal government on various issues from gun control to immigration to EPA regulations.

But here’s the real punchline: In 2018, Zollinger vehemently argued in favor of ID HB461, the State Sovereignty Responsibility Act. This bill would have officially recognized and made law the fact that the States have the rightful Constitutional authority to stand up to federal overreach and are not bound to unconditional submission. The bill reads:

The several states, including the state of Idaho, are not united, by the Constitution of the United States and of amendments thereto, on the principle of unlimited submission to the federal government. The several states constituted a general government by compact for special purposes, delegating to that government certain definite powers, reserving, each state to itself, the residuary mass of right to their own self-government. Whenever the federal government assumes undelegated power, its acts are unauthoritative, void, and of no force. Further, the federal government, created by this compact, was not made the exclusive or final judge of the extent of the powers delegated to itself, since that would have made its discretion, and not the Constitution, the measure of its powers; but that, as in all other cases of compact among powers having no common judge, each party has an equal right to judge for itself, as well of infractions as of the mode and measure of redress. It is the duty of the state of Idaho to assure that the federal government conform to said compact…

The Idaho Legislature hereby declares that the state of Idaho, on behalf of its citizens, is the final arbiter of whether an act of Congress, a federal regulation or a court decision is unconstitutional and may declare that the federal laws, regulations or court decisions are not authorized by the Constitution of the United States and violate its meaning and intent, and further, are null, void and of no effect regarding any Idaho citizen residing within the borders of the state of Idaho…

If a member of the legislature claims any executive order, federal law, federal regulation, federal court or U.S. supreme court decision is not constitutional as compared to the original intent of the United States constitution, legislation may be introduced proclaiming that fact, and if it is enacted into law, such laws, regulations or court cases are hereby declared to be unconstitutional. Such laws, regulations or court cases shall not be recognized by the state of Idaho and are null and void and of no effect in this state.

This is full-blown nullification. Zollinger voted in favor of this bill and publicly expressed his bewilderment that nullification hadn’t already been put into practice abundantly by the state of Idaho: “The only unfortunate thing about this bill is that we have to do this in the first place,” Zollinger said at a hearing for bill according to the Spokesman Review. “The United States Constitution controls certain limited things, certain limited powers. We have the right as a state to nullify as a state any law that isn’t one of those limited powers. And we haven’t exercised that right very often as a state.” (Emphasis ours.)

Also of note, State Rep. Christy Zito, who has been on the fence about immediately abolishing abortion, also spoke in favor of the State Sovereignty Responsibility Act. “What this legislation will do is it will send a message that the Legislature of the state of Idaho is willing to stand for its citizens. That the Legislature of the state of Idaho understands that we are 50 sovereign states that have entered into a contract with a federal government that has been provided to provide certain limited services to the people.”

As for Zollinger, beyond even simply being a vocal supporter of a nullification, he not only supported but was the primary author of the Restoring Constitutional Governance Act (ID HB473), a bill which would have nullified the federal National Defense Authorization Act (NDAA). The bill banned enforcement of the NDAA and specified that anyone who attempted to enforce it in the state of Idaho could be charged with kidnapping or murder:

Any person who commits a violation of this section shall be prosecuted under the Idaho criminal code relating to the substantive law for which the violation pertains including, but not limited to, assault, battery, kidnapping or murder.

So Bryan Zollinger, the man saying Idaho can’t uphold the right to life because the supreme court opined that it shouldn’t, has taken fierce stands on multiple occasions in favor of nullification and has introduced legislation explicitly nullifying a federal law.

If that sounds familiar, it’s because this is the exact situation playing out in Oklahoma. State Senate Pro Tem Greg Treat has been the primary opposition to the Abolition of Abortion in Oklahoma Act over the past two years. When opposing the abolition of abortion, Treat says “[nullification] is not the heroes of the stories, it’s the villains of the stories” and “To wrap yourself in a nullification banner is to be on the wrong side of history.” But Treat himself voted in favor of nullifying the Controlled Substances Act and Gonzales v. Raich to legalize medical marijuana, and not only supported but authored OK SB1379 in 2016 nullifying federal EPA regulations.

Why is it that Republican politicians are willing and eager to stand up to the federal government for so many different causes but not to protect preborn children from murder? It’s likely because of what the pro-life lobbyists have taught them.

The idea that we owe unconditional submission to Roe v. Wade is the explicit position of the pro-life establishment. In the words of Texas Alliance for Life Director Joe Pojman, “We could no sooner ignore SCOTUS than the force of gravity.” In the minds of the pro-life leaders, the supreme court’s authority to force us to allow murder is tantamount to the authority of natural law.

Lest you think Pojman is outlier, Scott Klusendorf, who is widely considered the intellectual leader of the pro-life movement, spoke similarly at a Christian conference in 2015. He explained his view  that it’s morally acceptable for a politician to compromise on abortion because “the federal courts have already decided in Roe vs. Wade, the Casey decision, and others, that no unborn children have the right to life. They’ve already dictated that from on high.”

Given the teaching of pro-life establishment, it shouldn’t surprise us that pro-life politicians are willing to stand up against federal overreach for all kinds of issues but not to save babies from abortion. Bill Ascol, pastor of Bethel Baptist Church in Owasso, OK had this to say on the matter: “Sadly, when the pro-life politicians kill a bill of abolition, the Oklahoma legislators are doing what the pro-life political organizations have taught them to do. We must stop paying homage to and granting the legitimacy of the pro-life industry.”

This mindset of submitting to the supreme court and regulating abortion within the parameters of Roe v. Wade and Planned Parenthood v. Casey has to be demolished. And it is being demolished as more and more Christians wake up to the reality of what the pro-life organizations are doing. As an example, the Oklahoma Baptists (Southern Baptist Convention), Oklahoma Free Will Baptists, and Oklahoma Republican Party all passed resolutions in the past year calling for the total and immediate abolition of abortion. The Free Will Baptist platform on abortion, for example, now reads:

WHEREAS, God’s Word clearly declares that all human life is a sacred gift from our sovereign God and that His Law is supreme over mankind and man’s law, and therefore that all abortion is wrong and usurps God’s sovereignty; and,

WHEREAS, government is not instituted to grant rights but to protect our unalienable, God-given rights to life, liberty, and the pursuit of happiness as recognized in the Declaration of Independence and Article 2, Section 2 of the Oklahoma Constitution; and,

WHEREAS, traditional pro-life laws do nothing to abolish abortion and, in fact, merely establish regulatory guidelines for how to obtain a legal abortion and, in so doing, simply facilitate the murder of innocent unborn children; and,

WHEREAS, Roe v. Wade will never be overturned unless a state enacts a law abolishing human abortion; therefore,

BE IT RESOLVED, that we, the Oklahoma Association of Free Will Baptists, call upon the Legislature, Governor, and Attorney General of Oklahoma to pass, sign, and enforce legislation abolishing the practice of human abortion at all gestational stages and for all reasons in Oklahoma.

This is the paradigm shift. The time of unconditional submission to Roe v. Wade is running short. The time of pro-life politicians being able to get away with regulating abortion and pretending that’s all they can do is running short. Abortion is going to be abolished soon and the supreme court’s opinion on the matter is going to be treated as the historic moral atrocity and obvious legal nullity that it is.